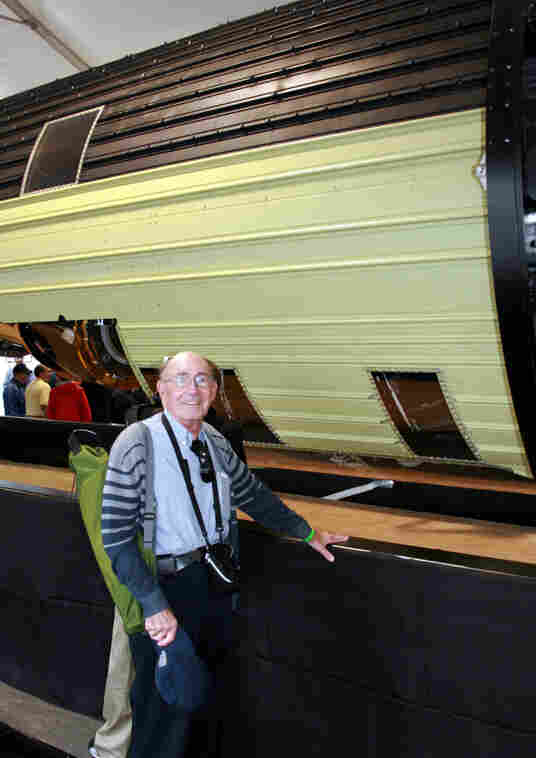 Phil Pressel designed cameras for the government's top-secret Hexagon project. He's only recently been able to speak about his life's work.

Every day for decades, engineer Phil Pressel would come home from work and be unable to tell his wife what he'd been doing all day.

Now, Pressel is free to speak about his life's work: designing cameras for a top-secret U.S. government spy satellite. Officially known as the KH-9 Hexagon, engineers called it "Big Bird" for its massive size.

Until the government declassified it last month, Hexagon had been a secret for 46 years.

"The challenge for this satellite, to design it, was to survey the whole globe," Pressel tells weekends on All Things Considered host Guy Raz.

It was a grand challenge for Pressel. Born in Belgium, he survived the Holocaust as a young boy when a French family hid him from the Nazis. Pressel says he never expected to come to America, much less become an engineer on a top-secret American spy satellite.

Hexagon's main purpose was, in a way, to prevent wars. It was designed to spot Soviet missile silos and troop movements.

"It permitted President Nixon, in the early 1970s, to sign the SALT-1 treaty, the Strategic Arms Limitation Treaty," Pressel says. Photos sent down from Hexagon enabled the U.S. to verify the Soviet Union's claims about its weapons stockpiles.

Those photos themselves were a technological marvel. Pressel says that even 40 years after its original launch, Hexagon is still one of the most complicated vehicles ever to orbit the earth because it used film.

"It was the last film-recovery system used for reconnaissance," he says. Each Hexagon satellite launched with 60 miles worth of film and an immensely complicated electromechanical system that controlled the cameras.

Once a reel of film was finished, it was loaded into a re-entry pod and sent back to earth. "And then at around 50,000 feet, a parachute would slow it down, and a C-130 airplane caught it in midair over the Pacific," Pressel says.

After all the film was sent back to earth, the satellite was abandoned, and a new one launched, he says. Nineteen of them went up before the program ended in 1986.

Pressel says he's immensely proud of the work he and his colleagues did on Hexagon. "We did all of this incredibly complicated work with slide rules, without microprocessors, without solid state electronics," he says.

"We used old technology, and it worked!"