Accessibility links
For One Commander, Afghan Success Comes At High Price In Afghanistan, Lt. Col. Jason Morris led the 3rd Battalion, 5th Regiment, which suffered the highest casualty rate of any Marine unit during the past 10 years of war. The "Darkhorse Battalion" commander says the unit's mission was a success — but he will live with the burden of those deaths. 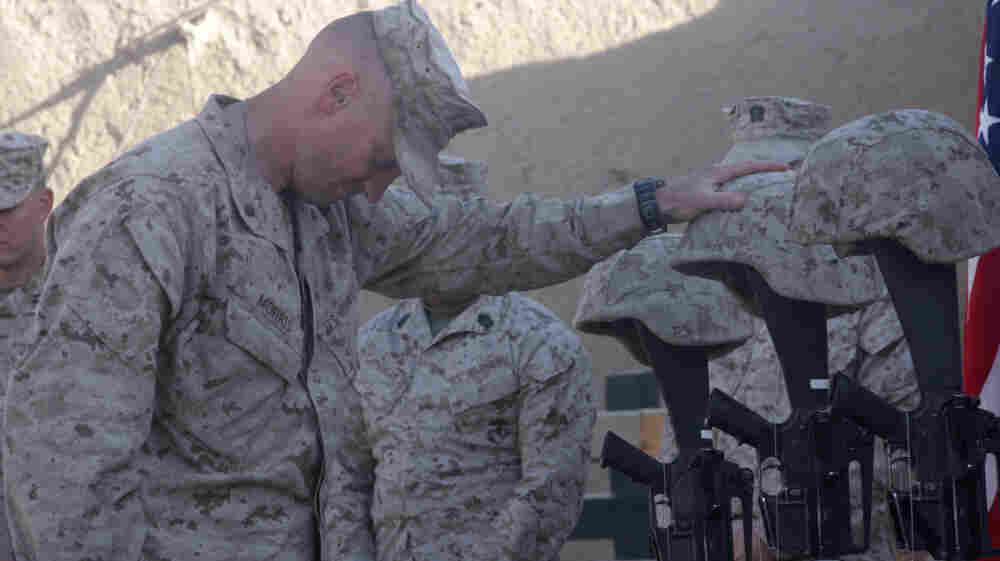 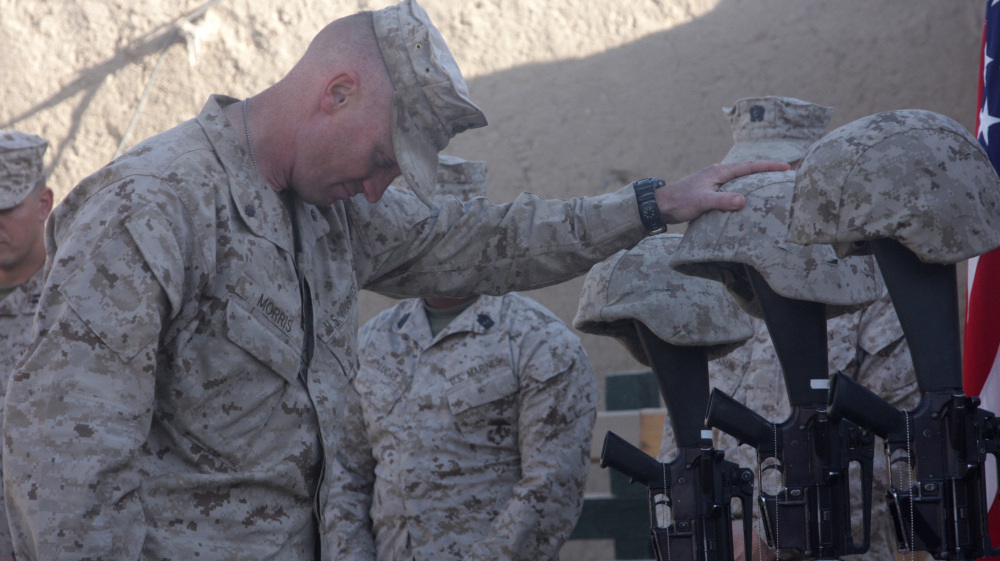 With his brown checkered sport coat, blue shirt and tie, Jason Morris could easily be mistaken for a young professor. Only the close-cropped hair and stocky build might suggest a military life.

Lt. Col. Morris served as a Marine officer during the 2003 invasion of Iraq and witnessed heavy combat in the push toward Baghdad.

But it's his experience in Afghanistan during the past year that lingers: Morris commanded the Marines of the 3rd Battalion, 5th Regiment, which lost 25 troops during its seven-month-long deployment, the highest casualty rate of any Marine unit during the Afghan war.

These days, he is studying for a master's degree at the Naval War College in Newport, R.I. Standing on a sea wall there, Morris looks at sailboats slicing through the bay.

"Narragansett Bay probably has more water in it than probably all of Afghanistan," he says. "Seeing blue and seeing green. Anything but brown." 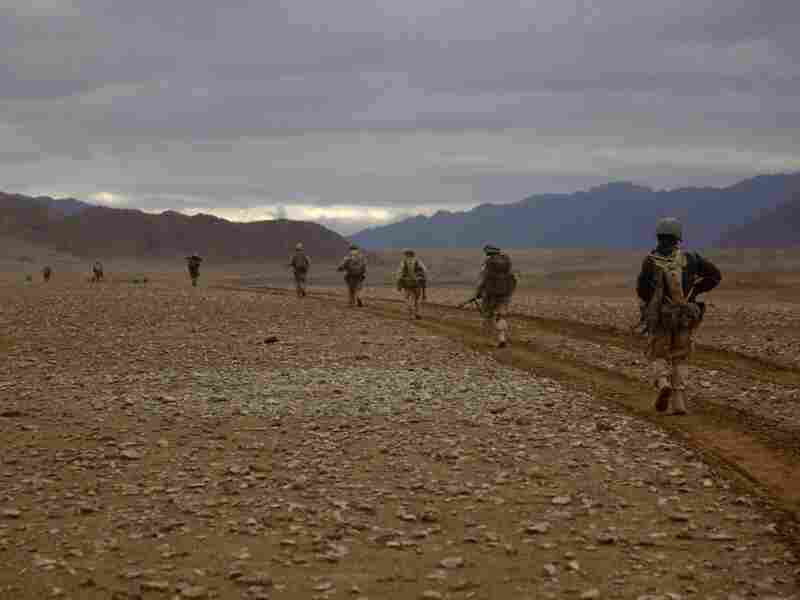 Marines of the 3rd Battalion, 5th Regiment conduct a search operation in Sangin district, Afghanistan, on Feb.18, 2011. Roadside bombs were a constant threat on such patrols. 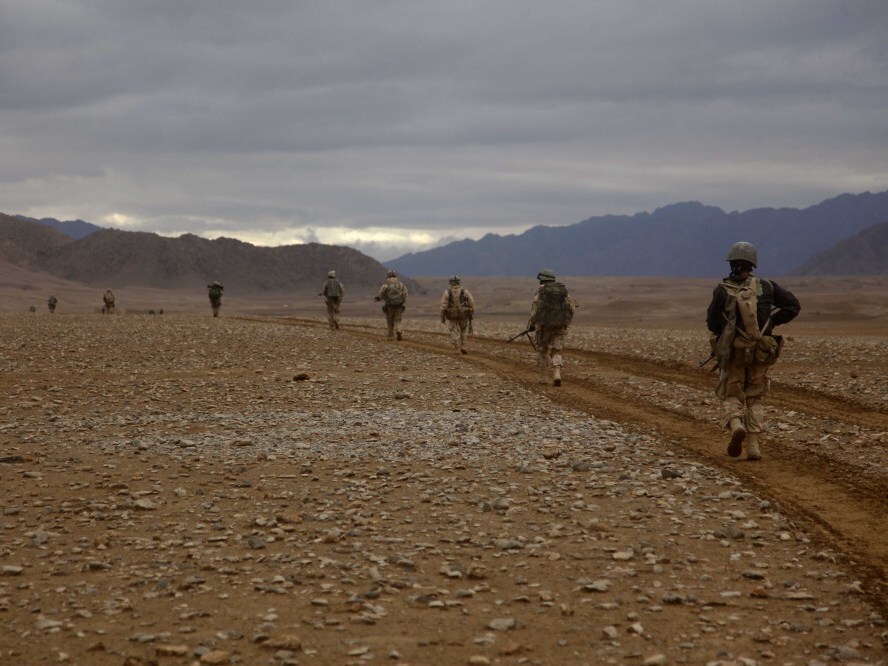 Marines of the 3rd Battalion, 5th Regiment conduct a search operation in Sangin district, Afghanistan, on Feb.18, 2011. Roadside bombs were a constant threat on such patrols.

Morris saw a lot of shades of brown during his seven months in southern Afghanistan's Helmand province: the high beige walls of village compounds, the thick chocolate mud that passed for roads, the dung-colored fields in winter.

It was just over a year ago that Morris took nearly 1,000 Marines to a place in Helmand called Sangin. It was a haven for Taliban fighters and drug traffickers, a place where the British lost more than 100 troops in four years.

But the British failed to push out and pursue the enemy, and the Taliban continued to control much of the area. It was Morris' job to take it back.

At the time, Lt. Gen. Rich Mills was the senior Marine commander in Helmand. He says what Morris' unit went through was as brutal as anything in the history of the Marines.

"It stands alone in the Afghanistan situation as probably being one of the tougher missions ever handed to an infantry battalion," Mills says.

"It's very rare. I certainly would compare it to some of the amphibious assaults during World War II, places like Guadalcanal," he adds.

'What Were We Doing Wrong?'

By the time Morris returned home in April, his Marines suffered historic losses: 25 dead and nearly 200 more wounded, about three-dozen of whom had lost at least one limb.

For Morris, those casualties seemed to come out of nowhere. Most of his men were killed or wounded not by enemy fire, but by chance. They would go out on patrol and step on homemade bombs that seemed to be everywhere.

And even in a war in which those homemade bombs — known as improvised explosive devices, or IEDs — account for nearly three-quarters of the American deaths, the sheer number and speed of the casualties was stunning.

More deaths followed in quick succession: The next casualties occurred back to back, on Oct. 14 and 15.

"That was what was tough. ... In two days we had lost seven Marines," Morris recalls.

Morris questioned his company commanders. Were they doing everything by the book? Were they following their training?

Back home, the families were frantic, wondering what was happening. Morris' wife, Jane Conwell, started getting a hundred emails each day. One wife was convinced she heard the doorbell ring in the middle of the night, that Marine officers were there to announce her husband's death.

From Afghanistan, Morris had to reassure families back in California — he even sent a message to a town hall meeting at Camp Pendleton, where the battalion was based.

His more immediate challenge, though, was to carry out his mission — and stop the casualties.

"At the time I was wondering, what were we doing wrong?" he says.

Higher-ups were wondering the same thing. U.S. Defense Secretary Robert Gates asked about the growing number of dead and wounded and suggested pulling Darkhorse out for a while.

What do you say? You just try to make him understand his son died doing what he wanted to be doing. And that he had an impact. A positive impact on the people of Afghanistan.

Lt. Col. Jason Morris on his talks with family members of fallen Marines

The Marine leadership said no.

"I said it would be a mistake," recalls Mills, the senior Marine officer in Helmand. "That the battalion was doing fine. Morale was high. Combat effectiveness was great. That the Marines up there wanted to finish the job. The worst thing we could have done was withdraw that battalion."

A Positive Impact As Casualties Subside

But for all the debate among the generals, it fell to Morris to figure out how to finish the job.

"I was on my own for this. I mean having to figure this out? It's up to the battalion commander," he says.

Morris pressed his Marines to slow down, to carefully search for roadside bombs when on patrol. He buried mock roadside bombs at his base so his troops could practice finding them.

Eventually, Morris got more troops and equipment. That made a big difference. The casualties started to subside. By the end of their deployment, Darkhorse spent more time rebuilding villages than shooting Taliban.

But it had come at a terrible price. When he returned home in April, Morris attended a dozen memorial services, all around the country. He tried to comfort those left behind.

"There were some that were very angry, just yelling, 'Why the hell did I lose my son for this?'" Morris recalls.

"What do you say? You just try to make him understand his son died doing what he wanted to be doing. And that he had an impact — a positive impact on the people of Afghanistan, helped rebuild their country," he says. 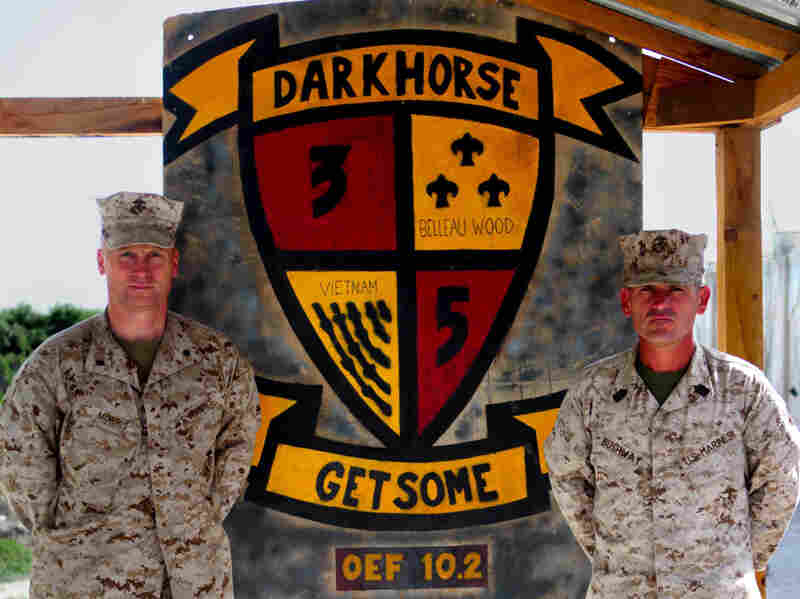 Lt. Col. Jason Morris (right) is seen with his "right-hand man" Sgt. Maj. James Bushway in Sangin in April 2011, close to the time the 3/5 departed from Afghanistan. 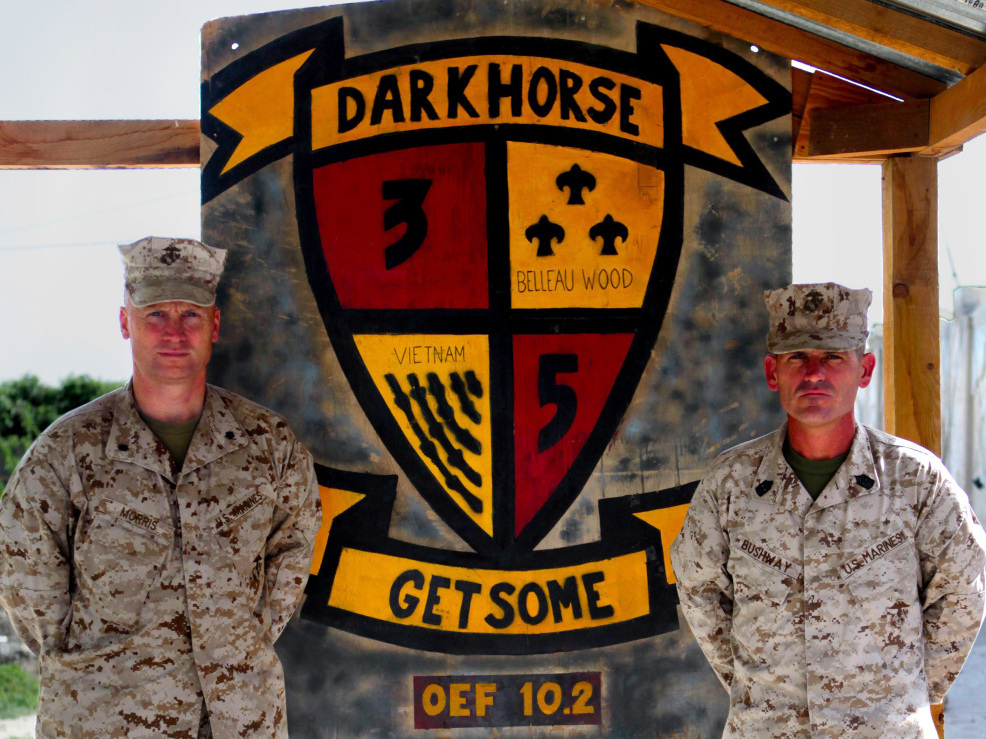 Lt. Col. Jason Morris (right) is seen with his "right-hand man" Sgt. Maj. James Bushway in Sangin in April 2011, close to the time the 3/5 departed from Afghanistan.

Morris believes what he tells the families. Other Marines who served with Darkhorse say the same thing — that they made a difference. That's one reason Morris signed up in the first place.

After graduating from the Naval Academy in 1992, Morris wanted to lead men in combat. He wanted the mental and physical challenge. And he was following a path his father had taken: John Morris was also a Marine.

But it was different back then. The elder Morris never got to know his Marines. Today, Marines train together, go to war together and come home together — as a unit. During Vietnam, individual replacements came, got wounded and were airlifted out.

"[My father] made a comment, 'You know, you've spent 18 months with these guys. You've met most of them. The lieutenants, you've drank beers with, you've met their spouses, you know their parents,'" he says.

Morris still keeps in touch with the members of Darkhorse Battalion. He has visited the seriously wounded at the naval hospitals at Balboa in San Diego, Calif., and in Bethesda, Md., outside Washington, D.C.

Right now, he is on a plum assignment, studying at the Naval War College. He says it's surreal — taking classes, living by the water, trying to slow down after combat command.

"I found it difficult to get out of that battle rhythm of being constantly on guard, working 18 or 19 hours a day," Morris says.

It's not easy to shake free of Afghanistan — and the knowledge that men he led didn't make it home: "It's a burden that you bear forever."