Accessibility links
An Afghan Hell On Earth For 'Darkhorse' Marines A year ago, the Marines of the 3rd Battalion, 5th Regiment arrived in Sangin, a Taliban haven in southern Afghanistan, for a seven-month deployment. Known as "Darkhorse," the battalion sustained a higher casualty rate than any other Marine unit during the 10-year Afghan war. 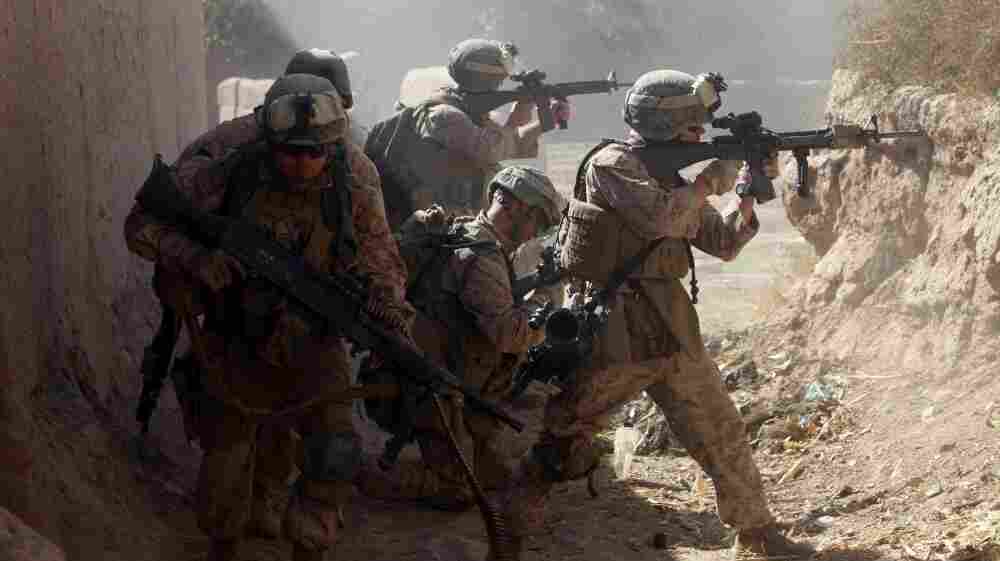 U.S. Marines with 3rd Battalion, 5th Regiment and the Afghan National Army provide cover as they move out of a dangerous area after taking enemy sniper fire during a security patrol in Sangin, Afghanistan, in November 2010. During its seven-month deployment, the 3/5 sustained the highest casualty rate of any Marine unit during the Afghan war, losing 25 men.

The Marines of the 3rd Battalion, 5th Regiment remember Sangin in southern Afghanistan's Helmand province as different from anywhere else they'd fought.

Morris was the commander of the Marines of the 3/5, known as "Darkhorse," and Sangin had been a battleground long before he arrived.

The British were there for four years, but could only fight the Taliban to a bloody stalemate. Now the British were leaving, and Darkhorse battalion moved in.

Morris' orders were clear: Eliminate the Taliban as a threat.

Arriving in late September 2010, they learned the place fast, slogging through canals, fighting through dense vegetation and patrolling a maze of narrow dirt roads bordered by 15-foot mud walls.

A few weeks earlier in California, the Marines gathered to say goodbye to their families in the middle of the night at the parade grounds at Camp Pendleton, where the unit was based.

Ashley Tawney was there with her husband, Sgt. Ian Tawney; they had known each other since they were kids. They had just bought a house, and Ashley was pregnant with their first child.

Ian had served in Iraq. In Afghanistan, he would lead his own squad.

They stood for hours that night at Pendleton. Then, just before sunrise, it was time to say goodbye. Ashley kissed her husband.

"He said, 'I love you,' and I just nodded, and I didn't want to start crying by saying it," she says.

Sgt. Tawney boarded the bus that would take him to his plane for the long flight to Afghanistan. 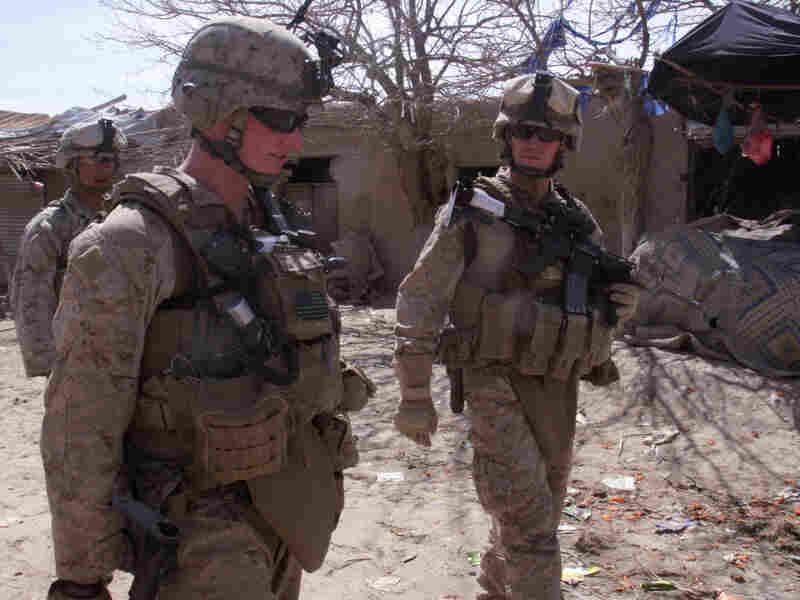 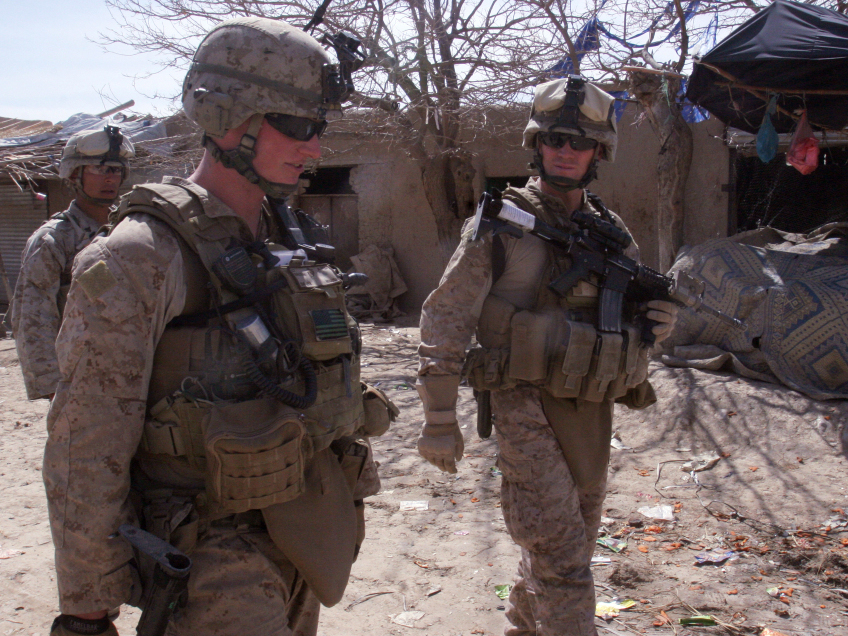 A few weeks later in Afghanistan, Tawney led his men on a patrol. The situation was extremely dangerous: The Taliban had stockpiled weapons and poked holes in thick mud walls to use as shooting positions in order to ambush the Marines.

Tawney had just a part of the fight. For Lt. Col. Morris — the Darkhorse commander — the battle was everywhere.

On Oct. 13 — the same day the 3/5 officially assumed control over the area — four Darkhorse Marines were killed when a blast ripped apart their vehicle.

The next day, some of Morris' Marines went out on a foot patrol. The initial report came in that they were taking mortar fire.

Then, Morris remembers three rapid explosions; they turned out to be three Marines stepping on IEDs in rapid succession. All three died.

In just two days, Morris lost seven of his men — more than his predecessor had lost in six months.

And the violence didn't let up. At the end of the week, another Marine was dead: Sgt. Ian Tawney. He was 25. 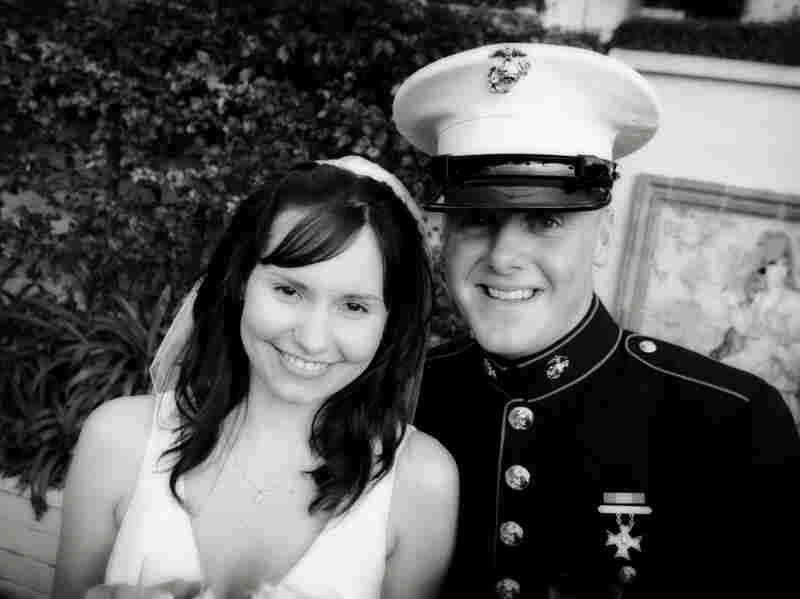 Ashley and Sgt. Ian Tawney (seen here on their wedding day) had known each other since they were children. Ian Tawney was killed Oct. 16, 2010, by an improvised explosive device while on a foot patrol in Sangin. Ashley says she doesn't know how she made it to the door the day Marine officers came to her house to tell her that her husband was dead. 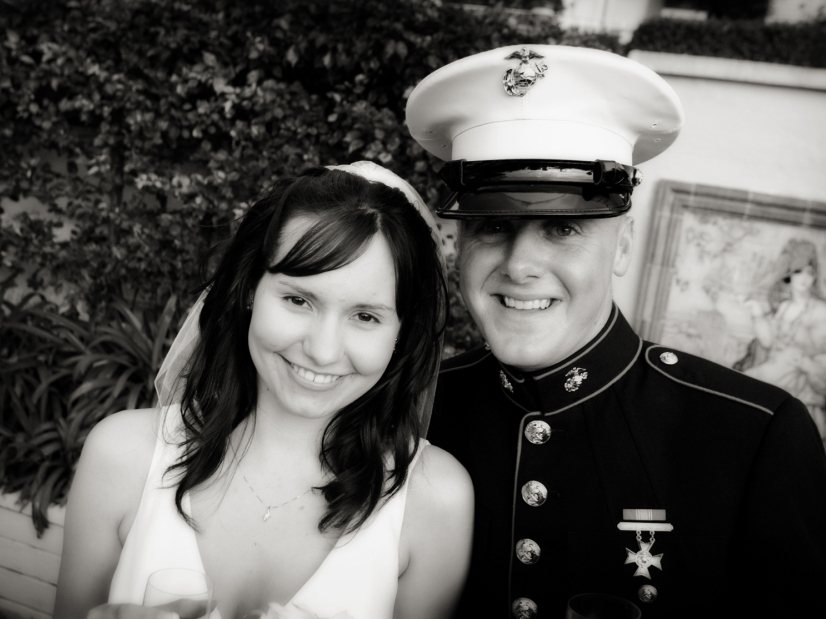 Ashley and Sgt. Ian Tawney (seen here on their wedding day) had known each other since they were children. Ian Tawney was killed Oct. 16, 2010, by an improvised explosive device while on a foot patrol in Sangin. Ashley says she doesn't know how she made it to the door the day Marine officers came to her house to tell her that her husband was dead.

'I Couldn't Fathom That He Was Gone'

At home in California, Ashley Tawney remembers waking up from a nap on her couch. It was the middle of an October afternoon.

The house she and Ian had recently bought had several French doors. Through the glass of one of them, she watched two Marine officers pass by. She didn't have to open the door to see them standing there.

To this day, she doesn't know how she made it to the front door.

"I, like, floated over there or something," she says. "And everything was kind of in slow-motion. And I opened the door, and then they started off with the whole spiel ... and I was just in shock."

"I remember my cat was playing with the chaplain's uniform. ... Then they started to do the paperwork ... the whole, me going to Dover to meet his body, and that's when it hit me, and I just covered my face with my hand and was like, 'Oh my God, oh my God.' There's no goodbye and there's no nothing. I couldn't fathom that he was gone," she says.

What happened to Ashley Tawney was happening to other Marine families.

The Darkhorse battalion was taking horrific casualties. Back home, the emails and phone calls flew back and forth.

To calm everyone down, the Marines convened a town hall meeting, and 150 family members showed up.

"I wasn't prepared for it to be as bad as it was. I don't think any of us really thought it was going to be like it was in October," recalls Amy Murray, the wife of Capt. Patrick Murray. 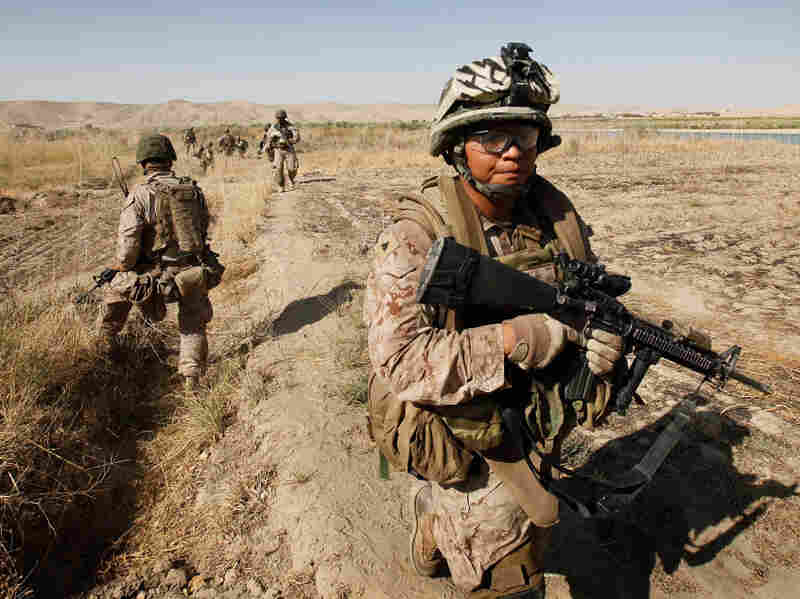 Cpl. Marcus Chischilly patrols near Forward Operating Base Zeebrugge in October 2010, near Kajaki, Afghanistan. This photo was taken a day before he stepped on an IED, losing his left leg and suffering other shrapnel damage. 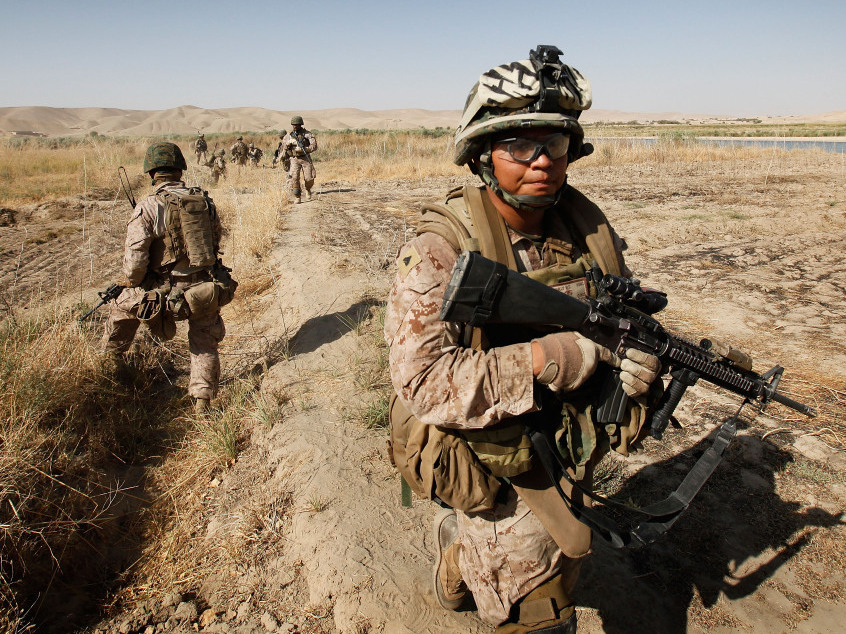 Cpl. Marcus Chischilly patrols near Forward Operating Base Zeebrugge in October 2010, near Kajaki, Afghanistan. This photo was taken a day before he stepped on an IED, losing his left leg and suffering other shrapnel damage.

"Sometimes you got off the phone, and your heart would sink," says Melissa Fromm, wife of Lt. Brad Fromm.

Says Kait Wyatt, wife of Cpl. Derek Wyatt: "It's pretty much hell on Earth for most wives, just going day to day with not knowing."

'Every Day Someone Was Dying'

October 2010 was pretty much hell on Earth for the Marines in Sangin, too.

Cpl. Marcus Chischilly stepped on an IED on Oct. 9.

"I was probably the eighth person that stepped on that same IED. It's based on luck, really," he remembers.

Capt. Chris Esrey recalls the incident in which Lance Cpl. John Sparks died. "Sparks just grabbed his machine gun and went to his rooftop ... and began to exchange fire with the insurgents when he was struck by a bullet."

There were "IEDs everywhere," says Lance Cpl. Josue Barron. "So one of my friends just stepped on one, and it got both of us."

It fell to Morris, the battalion commander, to fix things.

"I was on my own for this. I mean, having to figure this out? It's up to the battalion commander," he says.

Morris pressed his company commanders to take extra care on patrol. He stepped up training: The Marines buried mock IEDs and practiced finding them. And Morris asked for reinforcements.

His bosses back at the Pentagon had a different idea. Defense Secretary Robert Gates suggested pulling the Marines out of Sangin for a while.

"We don't do business that way. You would have broken the spirit of that battalion," Amos says.

Instead of pulling Darkhorse out, the military sent hundreds more Marines, as well as mine-clearing equipment.

Progress At A Price

Two months went by. By January, things started to get better.

Capt. Chris Esrey remembers that getting "more boots on the deck really increased our patrolling," while Sgt. Daniel Robert says it became easier for the Marines to get some rest.

The fighting let up. Morris says life returned: markets opened; children were on the streets.

Progress came at a price: 25 dead and 184 wounded, with 34 losing at least one limb over the course of the deployment. But the Marines say it was worth it.

"Every single Marine that was over there — and saw the beginning and saw the end — saw the 180-degree change in that place," Morris says. "We changed it. We changed it completely." 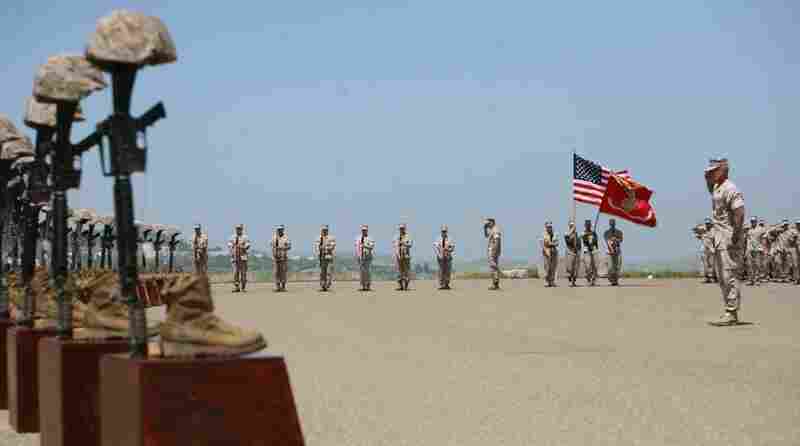 Marines with 3rd Battalion, 5th Regiment salute during the playing of taps at a memorial ceremony on April 29 at Camp Pendleton, Calif. Moments before, the Marines fired a 21-gun salute in honor of the 25 fallen warriors of the battalion. 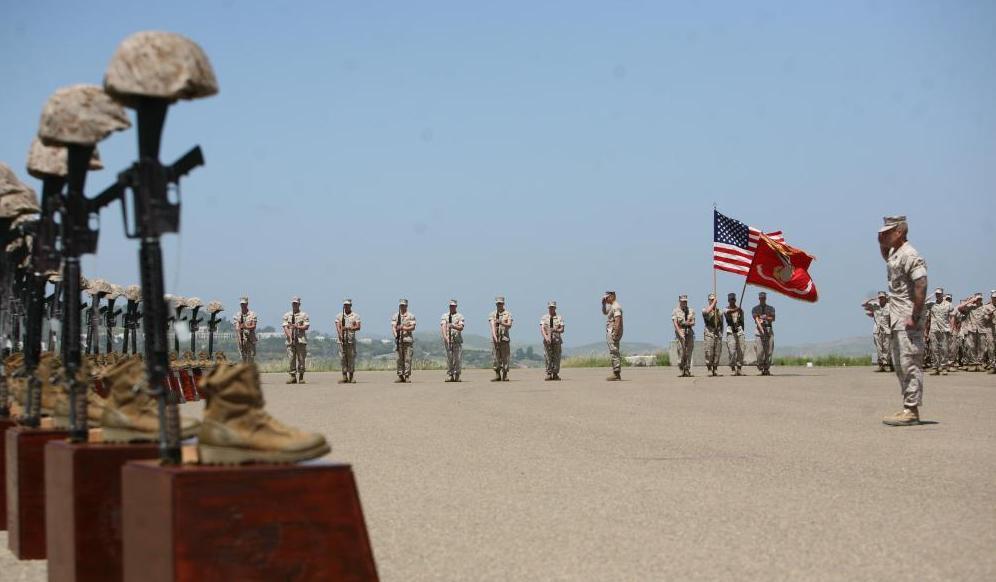 Marines with 3rd Battalion, 5th Regiment salute during the playing of taps at a memorial ceremony on April 29 at Camp Pendleton, Calif. Moments before, the Marines fired a 21-gun salute in honor of the 25 fallen warriors of the battalion.

Even Lance Cpl. Barron, who lost one eye, one leg and some of his closest friends, agrees: "It was worth it. If I say it wasn't worth it, what about my friends that died? I'm disrespecting them, like they died for nothing."

Remembering Those Who Were Lost

In April, back at Camp Pendleton, the survivors of Darkhorse gathered for a memorial service.

Some stood, some sat at a helicopter landing zone, a wide patch of asphalt surrounded by low brush, mountains in the distance. They faced 25 combat crosses, one for each of the dead. Helmets and weapons and combat boots sat on a wooden base.

Morris, Darkhorse's commander, stood before the families and the wounded.

"I hope you understand how much we appreciated your sons, your husbands, your brothers in life — and how much we continue to value their sacrifice and their memory. Marines, your Marines, these Marines — they took the fight to the enemy, and they won," he told them.

As the wind kicked up, they called the names of the Marines who were lost.

Ashley Tawney was there with her infant daughter, Claire — born three months after her father died — and remembers looking out at the crowd.

"Just seeing all the people that this deployment had affected, all the wounded, just the loss is just, like, overwhelming. And it kind of felt like his work funeral. He'll never get up when it's dark outside and drive to work and come home late. And our life down there was over. That chapter was over," she says.

Ashley is starting a new chapter. She plans to move to North Carolina. Her mother lives there. And it's not far from the Marine base at Camp Lejeune.

"Being part of that Marine family, you feel real secure. It's hard, because I still longed for that, I still wanted to be part of that life, but I didn't have him anymore, and he was my connection to that life," Ashley says. "I'm still a military widow, but then I'm not — I'm back in civilian life again, so it's hard to know where to fit in."