Accessibility links
Cases Tied To Dubious Legal Advice Reach Supreme Court On Monday, the court hears arguments in two cases involving defendants who claim they were ill-served by their own lawyers. The defendants claim their attorneys gave them bad advice on plea bargain offers. 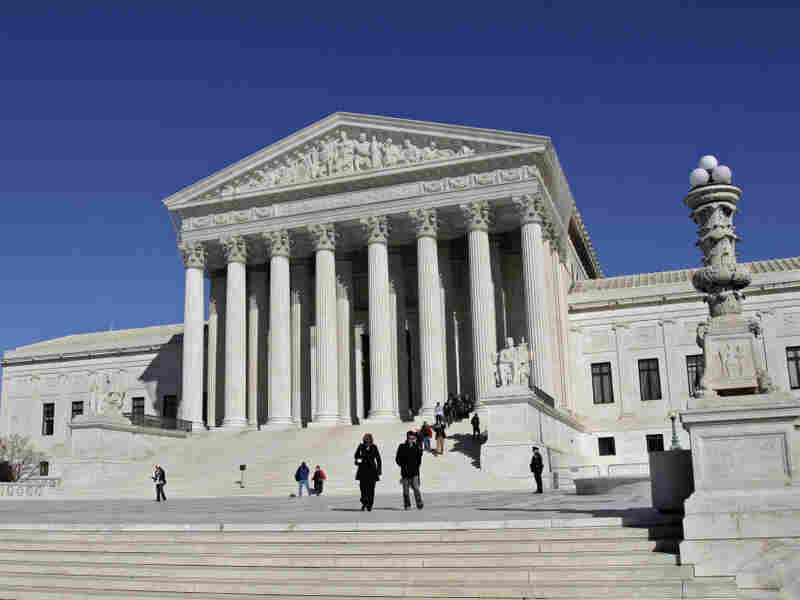 On television, most criminal cases are tried before a jury. But in reality, more than 90 percent of all criminal cases in the United States never get to trial; they are resolved with a plea bargain. For the state, these bargains save money and resources, and they often include agreements that the defendant will help prosecutors make other cases. But plea bargains have also been criticized as a boon for real criminals who have information to bargain with, while little guys, with nothing to trade, can get mauled by the system.

On Monday, the U.S. Supreme Court hears arguments in two cases involving defendants who claim they were mauled, not by the system, but by their own lawyers.

In both cases, the defendants claim that their lawyers' conduct was so bad that it amounted to ineffective assistance of counsel, denying them the legal help that the Constitution says they are entitled to when facing criminal charges. And in both cases, prosecutors claim the Constitution only guarantees a right to a fair trial, not a fair plea bargain.

The first case involves a Missouri college student named Galin Frye who was picked up repeatedly for driving while his license was revoked. The fourth time he was arrested, he was charged with a felony because of his prior offenses. But the prosecutor sent his lawyer a letter offering to reduce the charge to a misdemeanor if Frye would plead guilty and agree to a 90-day jail sentence.

The lawyer, however, never informed Frye of the offer, and it expired after a month. Frye, knowing nothing of the prosecutor's willingness to cut him a deal, eventually pleaded guilty without any conditions and was sentenced to three years in prison.

He only learned of the offer after his incarceration when his appeals lawyer discovered it.

Nobody disputes in this case that Frye's original lawyer violated a legal duty to keep his client informed of plea offers, and nobody denies that Frye ended up with a sentence more than 10 times longer than he likely would have gotten had he accepted the misdemeanor plea offer. His new lawyer, a public defender, will argue that part of any defense is the conduct of plea negotiations, and that by failing to tell Frye of the prosecutor's offer, the first lawyer denied Frye the effective assistance of counsel guaranteed by the Constitution.

But prosecutors will counter that the Constitution doesn't guarantee any right to a plea bargain; it only guarantees a right to a fair trial, and that since Frye pleaded guilty anyway, he wasn't denied a fair trial or the effective assistance of counsel at trial.

Similar arguments will be made in a second case involving clearly erroneous advice from a lawyer. A Michigan man named Anthony Cooper shot a woman in the thigh and buttocks, and was charged with assault with intent to murder.

Twice before trial, prosecutors offered to reduce the charge with a recommended sentence of roughly four to seven years in prison. But Cooper's lawyer advised him to reject the offer, telling the defendant that under Michigan law, he could not be convicted of attempted murder for wounds below the waist. That advice was indisputably wrong, and Cooper was convicted and sentenced to three times as much jail time as he would have served under the plea offer.

A federal appeals court subsequently ruled that the lawyer's clearly faulty advice denied Cooper the right to make an informed choice on whether to accept the plea or risk a trial. But the state appealed, contending that since Cooper concedes he got a fair trial, he has no valid claim.

Even if the Supreme Court agrees that either of these defendants was denied the effective assistance of counsel, the justices face a second thorny question: what to do about it. Should the defendant have a second chance at the plea offer? Do courts have the power to order that sort of remedy? Or should the defendant be restored to his original place in the system, before a trial and before a plea offer was made?