Accessibility links
Thousands Of Trucking Jobs, But Few Take The Wheel Industry experts estimate trucking companies are short about 125,000 drivers. It's tough to fill open jobs; many who go into trucking seem to be in a hurry to get out of it. Learning how to drive an 18-wheeler is a big investment in itself, and the brutal job requirements make for high turnover. 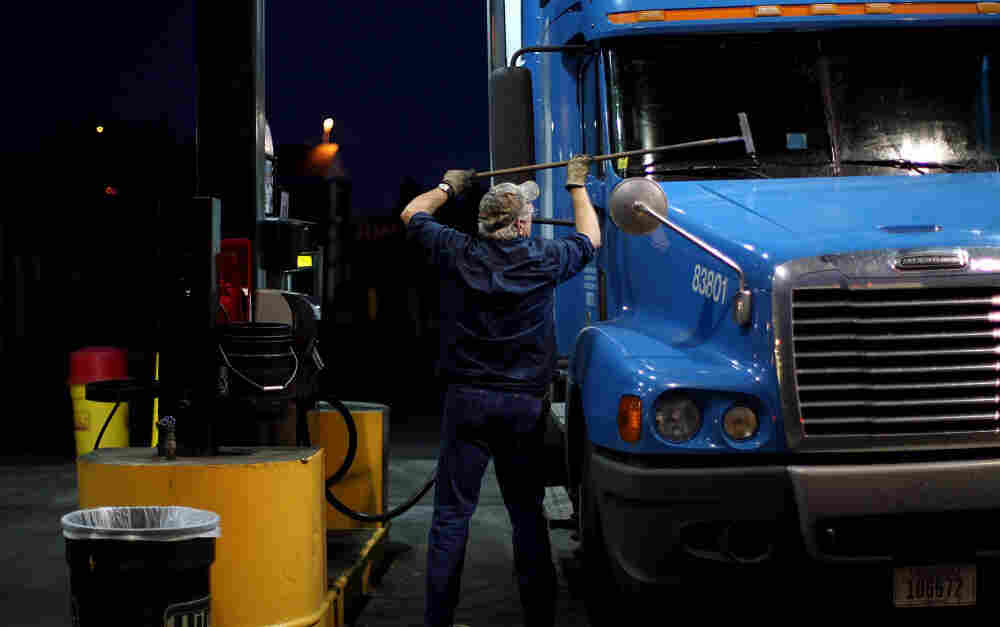 A truck driver cleans his windshield at a filling station in Milford, Conn. The long hours, weeks away from home and mediocre pay contribute to the trucking industry's shortage of an estimated 125,000 drivers.

Tough as it is to find work these days, tens of thousands of jobs paying middle-class wages are going unfilled.

Open truck-driving jobs require little more than a high school diploma and a month or so of training. But not everybody wants to be a long-haul truck driver, and many who do find they just can't hack it.

The story began three years ago when freight traffic fell off a cliff, pulling tens of thousands of truck drivers down with it. But now, at the American Central Transport terminal in Kansas City, Mo., recruiting manager Chad Still is showing off a lot of empty concrete.

"Not a lot going on over here today, which in the trucking industry, that's a [big] deal," Still says. "The less trucks and trailers you see around here, the better the freight is."

Freight is now moving at pre-recession levels and companies are hiring. Transportation analyst Noel Perry figures trucking companies are short of about 125,000 drivers. What's the hold up?

"It's real simple," he says. "Let's say you get laid off tomorrow. Do you have a commercial driver's license? No."

Learning To Drive An 18-Wheeler

For that you'd have to spend five or six weeks and a few thousand dollars at an institution like the Fort Scott Community College truck-driving school in Kansas City, Kan., where students like Cory Dockery come to restart their careers. 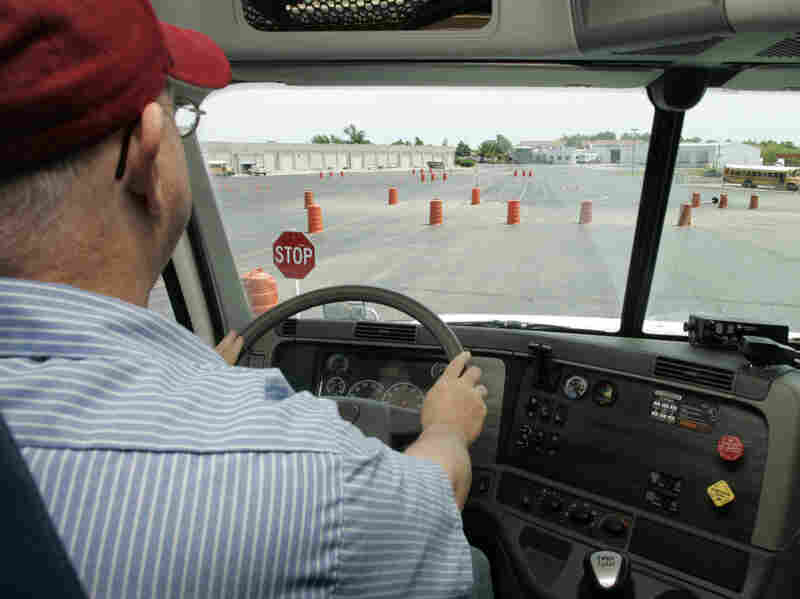 Student Tommy Wood sits in the driver's seat of a training truck at Central Tech truck-driver training in Drumright, Okla. 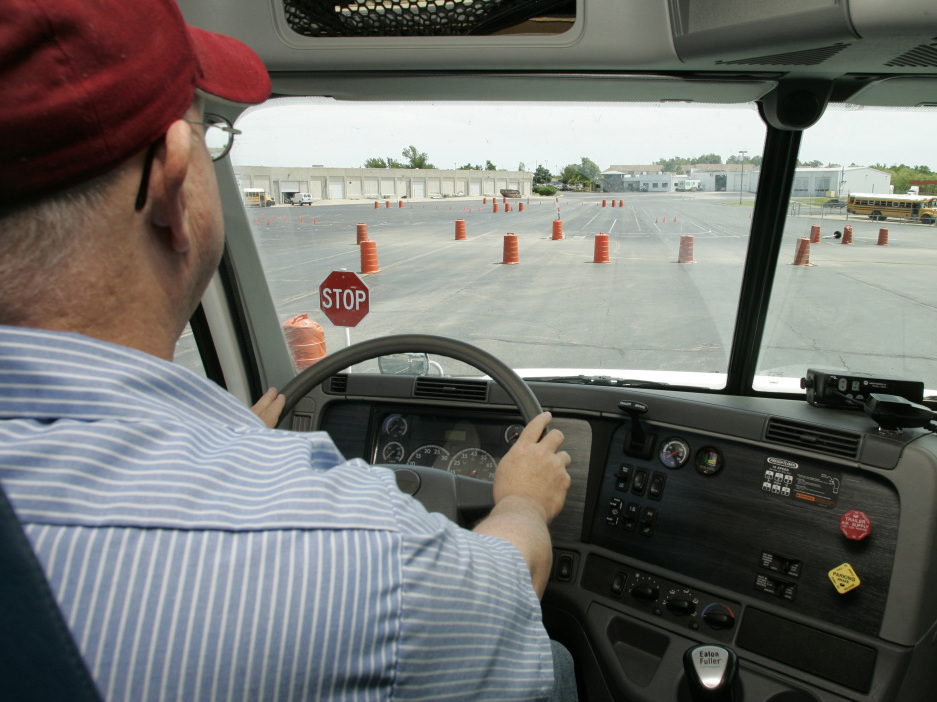 Student Tommy Wood sits in the driver's seat of a training truck at Central Tech truck-driver training in Drumright, Okla.

"I looked on the Internet and that's all you [basically see for] work: driving jobs and, I guess, working in the health care field. I really didn't want to be a nurse," Dockery says.

But mastering an 18-wheeler is not as easy as it looks. Dockery and another new driver are trained by John Williams, a second-generation trucker. Dockery is focused on mastering all the shifting and tricky backing maneuvers; landing a job is the least of his worries.

"I never thought in my wildest mind that I would ever be a truck driver, you know," he says. "But the way times [are] changing now, you have to find something that's going to be steady and permanent."

Permanent, maybe not: Many people who go into trucking seem to be in a hurry to get out of it.

"Trucking is an industry that goes through people like oats go through a horse. It's a tough job," says Todd Spencer, executive vice president of the Owner-Operator Independent Drivers Association.

He ought to know: He used to be a trucker. Spencer says this driver shortage is a myth.

"It's not a shortage; the problem is retention," he says. "And you won't be able to keep good people if you don't pay them comparatively for the demands that you ask."

Rough Demands From The Job

Trucking is an industry that goes through people like oats go through a horse. It's a tough job.

Long-haul truckers can pull down more than $50,000 before expenses, but it can be a brutal job. Truckers routinely drive for weeks on end without ever going home. They work and live in a cab about the size of a large office cubicle, eating in truck stops and sleeping in parking lots.

They're paid not for their time, but for the miles they drive. They see family only when work permits. Bob Costello of the American Trucking Associations says the work is getting less forgiving.

"If you are a new driver to this industry, you better be on your game every day," he says. "Because once you get a record — [if] you got in an accident, it was your fault — you're going to be fired, and it's going to be very difficult to find another job in the industry."

There's no escaping the scrutiny these days. The government now tracks each violation, from flat tires to fudged records, and scores each driver — a new requirement from last year. Coming regulations will likely trim the maximum workday and force truckers with serious health problems to get off the road.

All this is pushing some drivers out, and making quality drivers increasingly valuable. Bert Johnson with Con-way Truckload says the industry is just starting to respond.

"Pay has gone up a little bit, but really in the grand scheme of things we're paying people the same way we paid years ago," he says. "That's going to change, though."

It will change for the better as far as drivers are concerned. Johnson says companies are also adding benefits, like better health care and signing benefits, even refiguring logistics to get drivers home more often. Because just about everyone in the industry agrees: Good, safe, conscientious truckers are totally in the driver's seat these days.