Accessibility links
Foreign Policy: What Was Achieved In Libya? Involvement in Libya has been a controversial move from Day One. Foreign Policy's Marc Lynch explains why criticisms of the international intervention seem excessive. 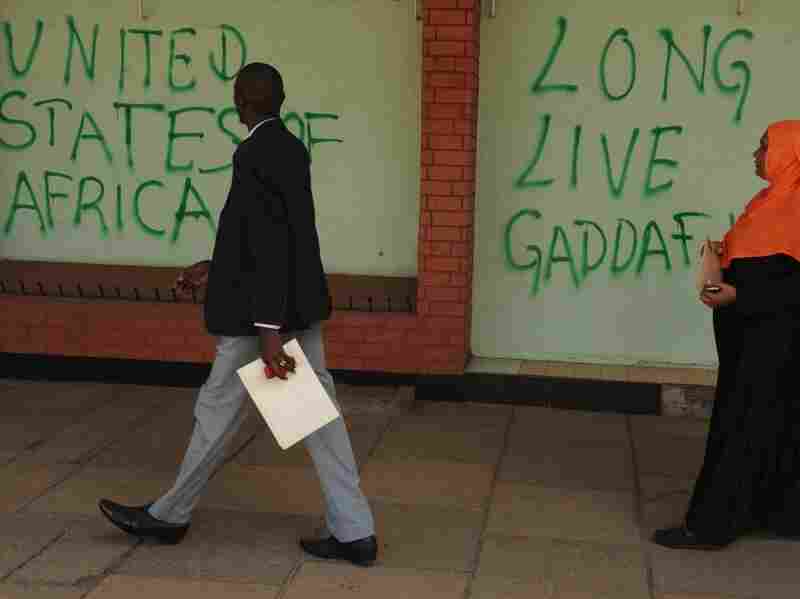 People walk past grafitti on the wall of the Libyan Embassy in Nairobi on Oct. 31, 2011 after activists took to the streets in support of slain Libyan leader Moammar Gadhafi, whom they said should have been aprehended and handed to the relevant authorities during the fall of his hometown of Sirte. 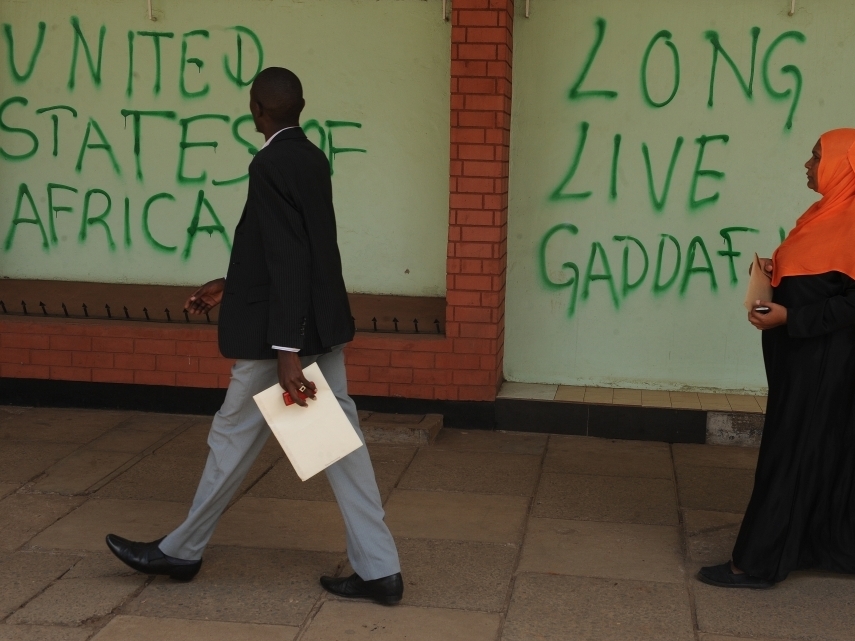 People walk past grafitti on the wall of the Libyan Embassy in Nairobi on Oct. 31, 2011 after activists took to the streets in support of slain Libyan leader Moammar Gadhafi, whom they said should have been aprehended and handed to the relevant authorities during the fall of his hometown of Sirte.

Read Another Opinion On Libya

Mustafa Abdul Jalil, leader of Libya's interim Transitional National Council, declared the end of the war and the liberation of Libya on Sunday following the controversial death of Moammar Gadhafi. Judging by the tenor of discussion in the United States, you would think that this was an unmitigated disaster — a humiliating end to an illegal war which prevented the UN from acting in Syria, massacred civilians, and opened the door to state failure, warlord violence, reprisals, and radical Islamist tyranny. (Though at least we can be relieved that the rebels can now get their mack on.) That's quite a catalog of failure dominating the public discourse at a time when the official war has come to an end, and most Libyans are celebrating Gadhafi's demise and planning a democratic transition towards a post-Gadhafi future. In fact, the intervention in Libya has been broadly successful and has helped to give Libyans the opportunity to build the country which they so deeply deserve.

There's every reason to be cautious about Libya's future, of course. There will be massive challenges facing the emerging new country, from independent militias to tribal and regional conflicts to the legacy of decades of the systematic destruction of independent civil society. But nobody denies that. Despite what Google tells me is 64,300,000 articles warning that "now comes the hard part in Libya," this is a straw man. I have heard almost nobody arguing the opposite — certainly not the White House, which consistently has warned that "We're under no illusions — Libya will travel a long and winding road to full democracy. There will be difficult days ahead."

But for all those concerns, the intervention in Libya should be recognized as a success and real accomplishment for the international community. The NATO intervention did save Libya's protestors from a near-certain bloodbath in Benghazi. It did help Libyans free themselves from what was an extremely nasty, violent, and repressive regime. It did not lead to the widely predicted quagmire, the partition of Libya, the collapse of the TNC, or massive regional conflagration. It was fought under a real, if contestable, international legal mandate which enjoyed widespread Arab support. It did help to build — however imperfectly and selectively — an emerging international norm rejecting impunity for regimes which massacre their people. Libya's success did inspire Arab democracy protestors across the region. And it did not result in an unpopular, long-term American military occupation which it would have never seemed prudent to withdraw.

I want to just briefly touch here on a few of the most contentious issues in the current Libya debate. I'm not particularly surprised or upset by how Gadhafi died. The man did horrible things to Libyans for decades, unleashed a brutal war against his own people earlier this year, and after the fall of Tripoli was actively planning an insurgency. Having him handed over to Libyan courts or to the ICC would have been nice, but I just don't think that his murder tells us very much at all about whether or not the future Libya will be governed by the rule of law. Nor, by the way, do I think that Clinton, Queen Elizabeth, or Sarkozy had him whacked to prevent him from spilling their secrets in court. That's silly.

Nor am I particularly worried by Abdul Jalil's comments about Sharia in his victory speech on Sunday. Those remarks shocked the West, and upset liberal Arab supporters of the Libyan revolution. But the idea that Abdul Jalil had with one speech established "the Islamic Republic of Libya" or delivered the new Libya into the hands of Islamic extremists is highly exaggerated. Neither Abdul Jalil nor the TNC as a whole is in any position to dictate Libya's constitutional future. Indeed, the greater problem facing Libya is the weakness of central institutions and the urgent need to establish broad political legitimacy, state control over the multitude of armed groups, and reconciliation across the many societal and political divides. I take his Sharia comments as a bid to bring together the Islamist fighters with other political trends. There is a long, hotly contested political transition to come. Abdul Jalil's comments are only one of the opening bids, not the final word.

I also do not agree that NATO's loose interpretation of its mandate in Libya doomed the prospects for a UN intervention in Syria. For that to be true, there would have needed to be some plausible prospect of an intervention in Syria to have been thwarted. There wasn't. At best, the Libya precedent has offered an excuse for Russia and China to oppose UN action, but it wasn't the cause. There's no question that many people at the UN and the international community were distressed by how NATO stretched its legal mandate during the course of the war. But the truth is, there has never been an appetite at the UN — or in Washington — for a military intervention in Syria, regardless of the Libyan example.

The outrage over Bashar al-Asad's violent onslaught against his opponents is real, and a growing regional and international consensus condemns his regime. Some Syrian opposition figures are changing their minds about refusing international intervention. But the obstacles to any such intervention remain overwhelming. The Syrian opposition controls no territory, can not confidently claim the support of a majority of the Syrian population, and until recently has refused to call for international intervention. Syria's terrain, alliances and location make for a radically different strategic environment than Libya's, and everyone recognizes that a No-Fly Zone in the Syrian case would immediately mean a larger-scale military intervention which nobody wants. The difficulties posed by Syria's bloodbath are real, then, and the policy choices excruciating. But Libya's not the reason.