Accessibility links
Facing Stiffened Congressional Opposition, Obama Goes It Alone The president's decision to act on some issues without congressional approval has political, as well as practical, ramifications. It also uses a script that has been followed by other presidents who faced a recalcitrant Congress. 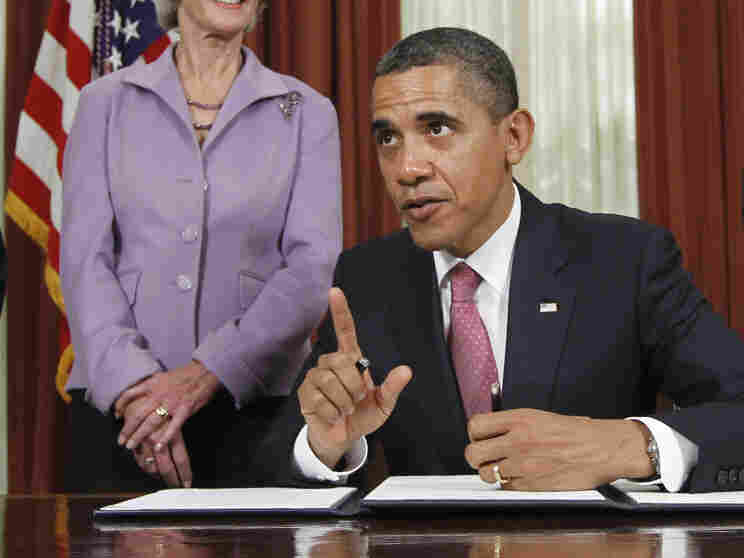 President Obama signed an executive order Monday directing the Food and Drug Administration to take steps to reduce drug shortages. The order is one of several similar actions the president has taken in recent weeks. 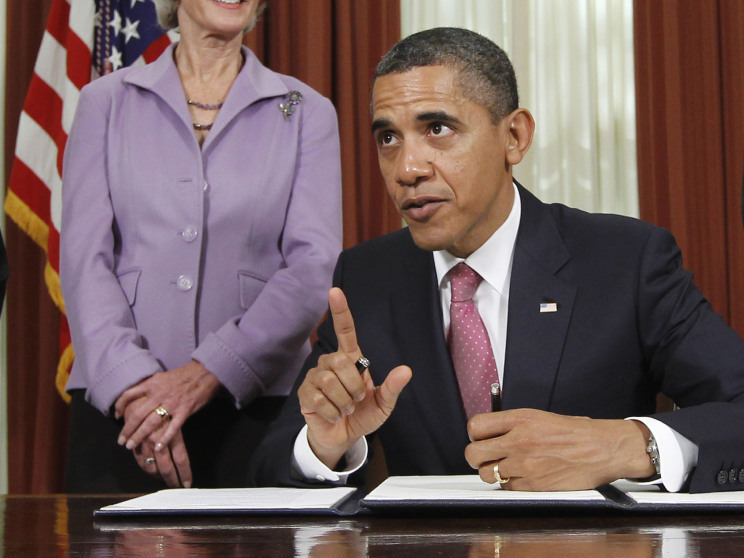 President Obama signed an executive order Monday directing the Food and Drug Administration to take steps to reduce drug shortages. The order is one of several similar actions the president has taken in recent weeks.

President Obama, faced with what he described as an "increasingly dysfunctional" Congress, has turned repeatedly in recent weeks to the time-honored, but often controversial executive order to unilaterally make policy.

The moves bear more than a slight resemblance to a strategy adopted by President Clinton, who issued a slew of executive orders ahead of the 1996 election. But Clinton was far from the only president to use the strategy.

"I think it's taking a page from a lot of previous presidents, frankly," said William Howell, a professor of American politics at the University of Chicago.

"When presidents can't get stuff done, they can't advance a policy agenda ... they have a strong incentive to exercise these unilateral powers," he said.

The executive order almost always generates controversy. There's no explicit authorization in the Constitution for presidents to issue executive orders, but there is a grant of executive power that allows the president to ensure that "laws be faithfully executed."

The first executive order was issued by President George Washington in 1789. Some of the most famous and infamous acts of government came in the form of executive orders — everything from Abraham Lincoln's Emancipation Proclamation to Franklin D. Roosevelt's order to detain Japanese-Americans during World War II.

Presidents Give And Take Away

Even though the orders can be — and frequently are — easily rescinded by a succeeding president of another party, they can make short-term political points with a public that expects its president "to get things done," Howell says.

And while Congress could block an executive order either by passing legislation opposing it outright or simply refusing to fund it, the president still has a veto.

The executive order "tends to be used in those cases where the president says, 'Look, I can't produce majorities or supermajorities required to enact legislation ... but the opposition isn't so strong that if I just set policy that they will be able to overturn it," Howell said.

Jonathan Turley, a law professor at George Washington University, agreed. "The fact is a president knows that for a great many things that he does, Congress would be hard-pressed to mount an opposition or overcome a veto," Turley said.

That still leaves the possibility of judicial challenge, which is what happened in 1952 when the Supreme Court ruled that President Truman didn't have the authority to order the seizure of steel mills during a nationwide labor strike. In 1996, a federal appeals panel nullified an executive order from Clinton to prevent the U.S. government from contracting with organizations that hired strikebreakers.

That's an extremely dangerous thing for a system based on checks and balances.

In recent years, however, the Supreme Court has generally made it harder to challenge a president's actions, Turley said, leaving the president with "unchecked power."

"That's an extremely dangerous thing for a system based on checks and balances," Turley said.

"The problem is that half the public is always happy with the executive order in our divided politics, so all the Democrats who were greatly aggrieved by George W. Bush's executive orders are now conspicuously silent," he said.

Turley said Obama's claim that "we can't wait" for Congress was "the worst possible defense" for the use of executive orders — one that appears to justify defying the legislative branch. But Howell sees one recent example where the president might have done well to brandish the power, yet did not.

"I for one thought it was something of a mistake that Obama didn't at least threaten to unilaterally lift the debt ceiling," he said. "The mere threat of doing so might have informed the whole debate between the president and Congress."