Accessibility links
A '20s 'Scrapbook' Tells One Girl's Vintage Adventure Author Caroline Preston's visual tour de force The Scrapbook of Frankie Pratt uses a kaleidoscopic collage of historical clippings, trinkets and baubles to tell the story of a young girl aspiring to be a writer in the Roaring '20s. 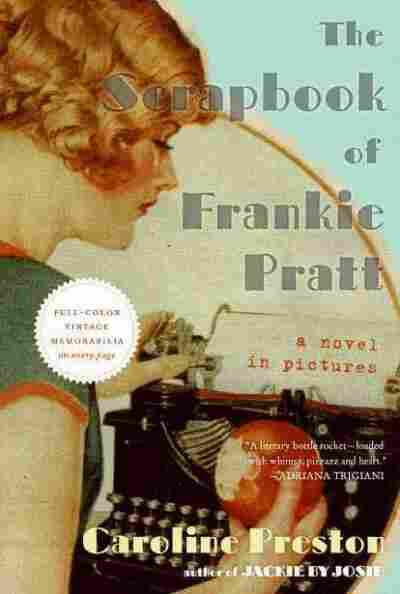 The Scrapbook of Frankie Pratt

The Scrapbook of Frankie Pratt may be the first novel to thank 300 eBay sellers in the acknowledgments ("A+++ rating!"), but it certainly owes its existence to the hordes of antiques hoarders who supplied author Caroline Preston with the ephemera that fills her new book. Preston, the author of Jackie By Josie, a novel that explores the secret life of Jackie Onassis through the eyes of a jaded graduate student, and Gatsby's Girl, a novelization of the relationship between F. Scott Fitzgerald and his college girlfriend Ginevra, has spent years honing the art of translating her historical obsessions into fiction. Frankie Pratt may be her most obsessive work yet — it is, in fact, a monument to decades of stockpiling and eBay trading — but it is also her most charming.

Preston's life outside writing involves professional archivist work for the likes of Harvard and the Peabody/Essex Museum, and her collector's eye informs every page of the "scrapbook novel." Preston has stuffed her account of a 1920s flapper-in-the-making full of treasures, from scanned images of vintage tarot cards and bits of lace and lizard skin to Parisian maps and ticket stubs from Coney Island. The concept is a simple one — young girl from New Hampshire goes to Vassar in 1920, finds herself as a writer in Greenwich Village in 1924, moves to Paris in 1926, and returns home to America to find a husband in 1927. It is a plot that cribs from Fitzgerald's novels and Jazz Age stories, A Moveable Feast, Thoroughly Modern Millie and, most recently, from Woody Allen. But the narrative is neither the hook nor the driving force of the novel. What Preston has created is historian's catnip; a tale of the Roaring '20s illustrated in the dazzling language of trinkets and baubles, strung together by the typewritten words of a bubbly every-girl.

Just as Mamma Mia! is a (delightful) delivery vehicle for ABBA songs without much glue in between, Frankie Pratt's plot provides just enough structure for Preston to show off with her sumptuous '20s hodgepodge. Sure, it's borderline kitsch — but it's also nearly impossible to crack open the book without wanting to devour it. Each page offers a new amusement: among them, a copy of the archaically prim rules for women at Vassar, images of "modern girls" in cloches and drop-waist gowns, a tortoiseshell cigarette holder, a charm bracelet made with Cracker Jack prizes, yellowed telegrams, and an embroidered Whitman's Sampler box. Preston has created the kind of visual candy that coffee tables were designed to showcase. More clever, still, Frankie Pratt is a novel that, in the middle of an e-book revolution, demands to be experienced in physical form, in one's hands.

Our infatuation with the 1920s aesthetic never seems to fade entirely, and with the recent popularity of Allen's Midnight in Paris and Ken Burns' Prohibition, and the announcement of an upcoming Baz Lurhmann remake of The Great Gatsby, starring Leonardo DiCaprio, 2011 has been a particularly strong year for romanticizing the period. Preston's whimsical scrapbook suggests that the romance originates from the authentic beauty and playfulness of those times. Flipping through The Scrapbook of Frankie Pratt, we're left hoping that Preston has eBay collectors from other decades in her sights — and that we can follow Frankie's story, in full glossy color, through the rest of the century.

Read an excerpt of The Scrapbook of Frankie Pratt