Accessibility links
With Protests, Syrians Are Learning Politics For decades, Syrian President Bashar Assad and his late father Hafez Assad did not allow any real politics in Syria. But the protests are teaching them how to organize. 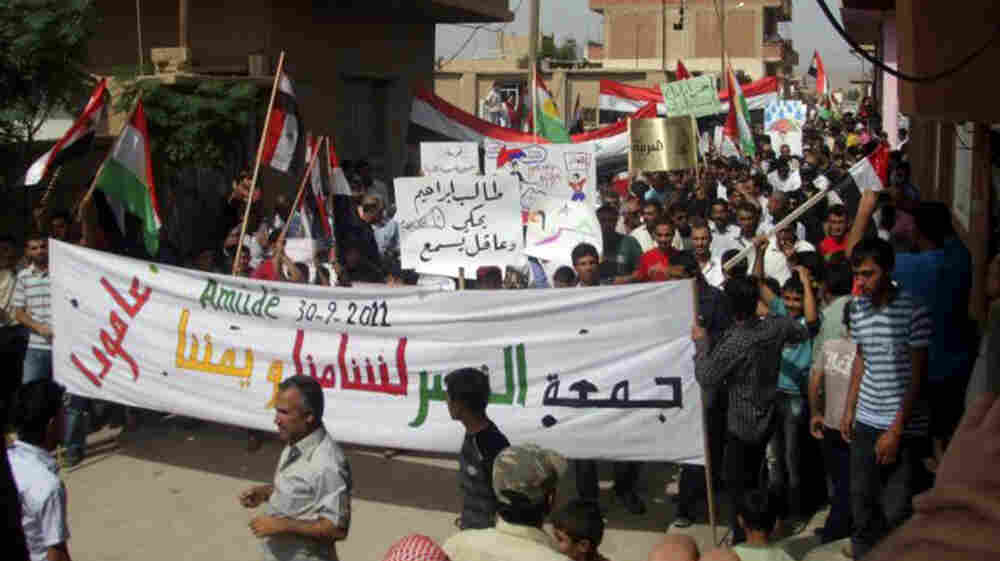 Anti-government protesters march in the village of Amouda, Syria on Sept. 30. For many Syrians, the protests mark the first time they have taken part in anything resembling politics. 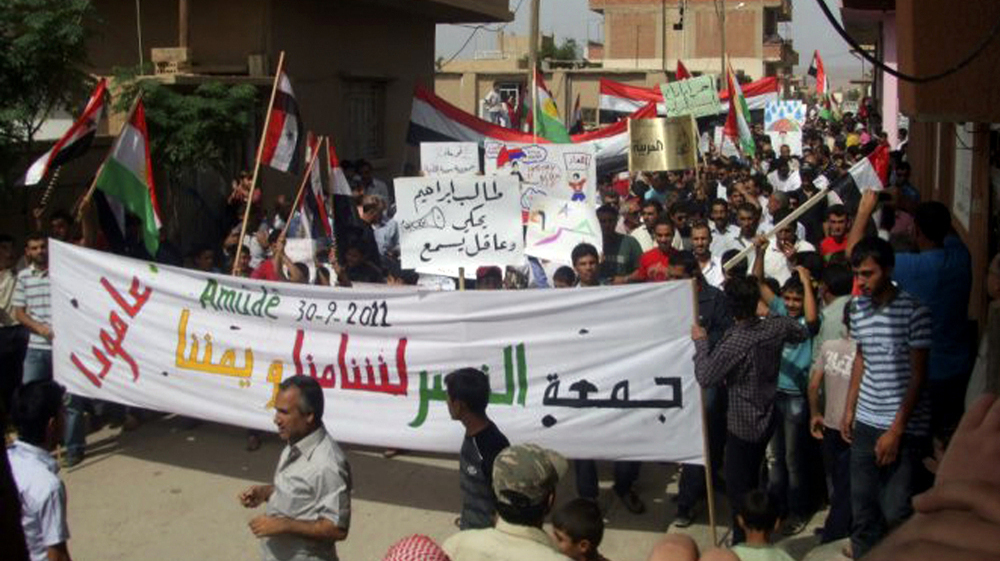 Anti-government protesters march in the village of Amouda, Syria on Sept. 30. For many Syrians, the protests mark the first time they have taken part in anything resembling politics.

Government opponents in Syria have not been able to dislodge President Bashar Assad, but they are doing something the country has rarely if ever seen: they are organizing by themselves, outside of government control.

The massive street protests, demanding the end of Assad's regime, have defined the revolt over the past eight months.

But other things are happening as well, far from public view. In one quiet office in Damascus, Ashraf Hamza, 28, is leading a group of men at a session on community organizing.

"We are creating a new experience in Syria, a new example," he said. "It's not existed in Syrian society."

In workshops across the country, Hamza and his team of around 400 volunteers are teaching political skills that even include things like running a political campaign.

"Our work is long-term work," he said. "It's a process that changes the community itself, the society itself."

One goal, he says, is built on the hope that young people will be able to run for positions in parliament. There is no prospect of a free election now. But Hamza's work assumes that Syria is changing.

Syria has never had real elections in Hamza's lifetime, but this past summer he and his partners completed a four-month on-line course from Harvard University on leadership and community organizing.

Hamza said perhaps the most important lesson he learned was the need for independent thinking.

"We are outside the box already, because we are trying, we are setting a new example," he said. "We are doing something that my parents, my friends, are not used to."

"They are agitated, and they've had it with being complacent and reactive," Tarabeshi said. "They want to be proactive. They want to carry their future in their hands. They don't want to be dictated to."

That idea has been a driving force for so many young people in the uprisings across the region this year. Ashraf Hamza, the political organizer, counts those leading Syria's protest movement among his friends.

Some of them say he should join the protesters in the street. But others, he says, "believe the same thing I believe, that each one of us has a different role to do."

Hamza says he shares many of the goals of the anti-government movement where a civil society is taking shape.

Activist Shakeeb Jabri has taken part in on-line meetings to organize tasks in towns where protests have been taking place.

"They do interviews with the families of the dead, to get the facts straight, they do damage reporting, damage analysis and reporting, they participate in activities to clean up the streets," he said.

A spontaneous movement eight months ago is now developing some structure.

So far, this movement has failed to produce shared political goals, or a unifying leadership. An older generation of regime opponents says that because after 40 years of rule by Assad and his father, Hafez Assad, Syrians have to learn how politics work.

Ashraf Hamza takes his lessons from the problems faced by the youth of Egypt. They toppled an autocrat, but have so far failed to transform themselves into a coherent political movement.

"I'm sure they know something (about politics), but they can't apply it, or their goal was not to think about politics after their success," he said. It's a lesson he says he doesn't want to see repeated in Syria.