Accessibility links
New Republic: Could Scandal Be Good For Cain? Is Politico's latest claim too much scoop to spin? The New Republic's Ed Kilgore explains how harassment claims, handled in the right way, could help Herman Cain's chances.

New Republic: Could Scandal Be Good For Cain?

New Republic: Could Scandal Be Good For Cain? 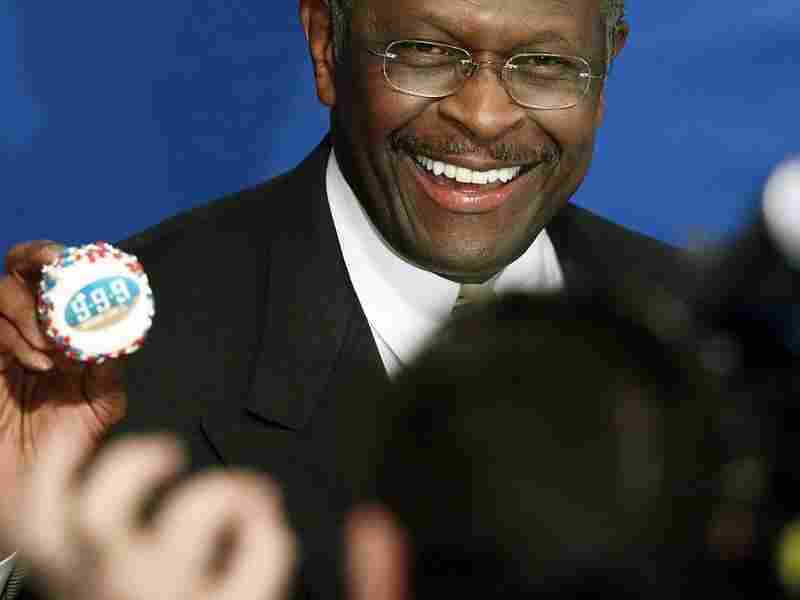 Republican presidential candidate Herman Cain holds up a cupcake decorated with his 9-9-9 economic pland before a speech at the National Press Club Oct. 31, 2011 in Washington, DC. 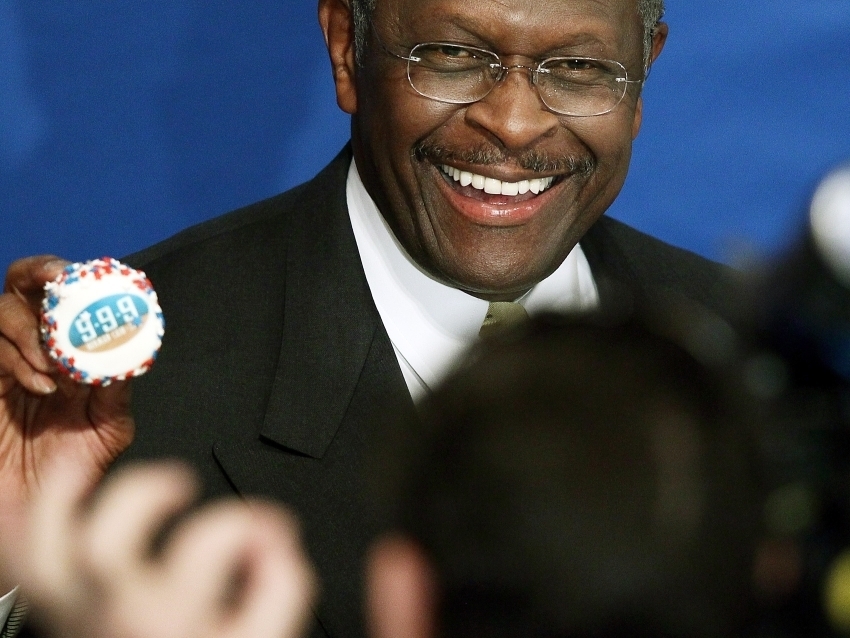 Republican presidential candidate Herman Cain holds up a cupcake decorated with his 9-9-9 economic pland before a speech at the National Press Club Oct. 31, 2011 in Washington, DC.

The trouble Herman Cain is experiencing with Politico's scoop on an alleged past settlement of sexual harassment charges—as well as his initial reaction to it—was, in many respects, predictable. Ever since the pizza executive's improbable rise to the top of Republican presidential polls, there have been vague but menacing predictions that the new scrutiny he would face could quickly burst the bubble of his candidacy.

Likewise, Cain's pose as a victim of a politically, and perhaps racially, motivated smear was also predictable, but could prove remarkably effective. The deep resentments raised by the Clarence Thomas precedent, which Cain and his defenders are already invoking, are a powerful and living memory for the conservative rank-and-file. While the impact of the current allegations against Cain will ultimately depend on whether or not they can be proven, and if so, how deeply they contradict his own account of the affair, there is a strong possibility the candidate will use his own supposed victimization to turn the saga into a plus for his campaign and a direct challenge to his rivals and intraparty detractors. And in doing so, Cain may finally roll the dice and become a deadly serious aspirant to the presidency.

AS THE ALLEGATIONS against Cain unfolded, the insightful conservative-watcher David Weigel of Slate has sought to debunk the idea that there is any valid parallel between Thomas' situation and Cain's. For instance, law professor Anita Hill didn't come forward with her allegations against Thomas until he was nominated for the Supreme Court, while Cain's accusers came forward soon after the alleged behavior occurred, and when he was nothing more than the president of a prominent trade association. Moreover, the political context is different, because Thomas enjoyed universal support from Republicans and (initially) strong trans-partisan support from African-Americans, while Cain has a big target on his back within his party and has no visible black support.

But if that's all true, there remain parallels between Thomas and Cain that go deeper than the mere facts of their "cases." After the intervening decades of partisan polarization and "culture wars," it is sometimes difficult to recall how shockingly powerful the emotions unleashed by the Clarence Thomas confirmation hearings seemed at the time. The she-said he-said confrontation between Thomas and Hill polarized the entire country, with the murky facts of Thomas' behavior towards Hill becoming crystal clear when viewed through the various prisms of gender, race, and ideology. It certainly became an article of conservative faith that the effort to defeat Thomas' confirmation exposed a deep and unsavory hypocrisy among liberals about race, and a proprietary attitude about acceptably "authentic" African-American viewpoints.

Once installed on the Supreme Court, Thomas quickly became identified with radical ideas about the constitution's connection to divinely endowed "natural rights" that in every important respect anticipated the Tea Party's brand of "constitutional conservatism." He also became a living symbol of the emotionally important link in the minds of social conservatives between their cause and the civil rights movement. That Thomas' once-robust support from African-Americans quickly evaporated after his constitutional views became apparent simply confirmed his status as a rebel against his liberal-brainwashed brothers and sisters, and a brave crusader for the color-blindness that conservatives consider the true, if betrayed, legacy of Martin Luther King.

As an African-American who has cultivated a close relationship with the Tea Party, Cain was the heir to Thomas in the conservative imagination well before there was any question of comparing sexual harassment allegations. From the very beginning of the campaign, he has adopted the Palinesque persona of an anti-politician running an unconventional campaign that is deeply threatening to elites in both parties. A big part of his self-image, in this respect, derives from his unique status as an African-American conservative who is simultaneously "above race," but is also determined to liberate his own people from the "plantation" of subservience to contemptuous liberals who keep black people in the bondage of dependence on Big Government. Cain has also long been fond of comparing himself to Clarence Thomas and bravely anticipating the kind of "high-tech lynching" the Supreme Court Justice narrowly survived during his confirmation hearings. It's no accident that Thomas's wife Ginni, a self-described Tea Party activist, had warm things to say about Cain back in June, when he was largely an afterthought in the presidential campaign.

So in coping with his potentially fatal current situation, it would be astonishing if Cain didn't play the "Clarence Thomas card," which may seem like the "race card" to liberals or to Cain's Republican foes, but in the code of today's movement conservatives is virtually the opposite. Via the rich symbolism of Thomas' passion play, Cain can reinforce the sense that he is the victim of a concerted assault by all of the Tea Party's hobgoblins: secretly racist white liberals, the real-America-hating media elites, and the RINO-ridden Republican Party establishment. Indeed, from the deeply conservative point of view, these forces have been itching for the chance to destroy the man who offers a living refutation of the claim that the Tea Party is motivated not by simple patriotism but by selfish and atavistic resentment of minorities and our current, half-black president. If these powerful, defensive emotions are properly harnessed by Cain, the timing of the sexual harassment allegations could turn out to be fortuitous rather than disastrous, certainly eclipsing doubts about the details of Cain's tax plan or exactly what he said to Piers Morgan about abortion.

Best of all, for Herman Cain, seizing the mantle of Clarence Thomas gives him a way to prophesy his eventual vindication. After his confirmation, Thomas famously told friends a lifetime appointment to the bench was a great way to have the last laugh. Cain may be on the cross of persecution right now, but what a resurrection it would be if his troubles finally anoint him the true Tea Party champion against Mitt Romney and give him an actual shot at becoming the man who appoints Supreme Court justices!