Accessibility links
Climate Change Has California Vintners Rethinking Grapes Familiar French varieties aren't well-suited to high temperatures, so some researchers suggest cross-breeding to make the grapes more heat tolerant or drought-resistant. But once you breed pinot noir with something else, you can't call it pinot noir anymore. And marketing new wines is a challenge. 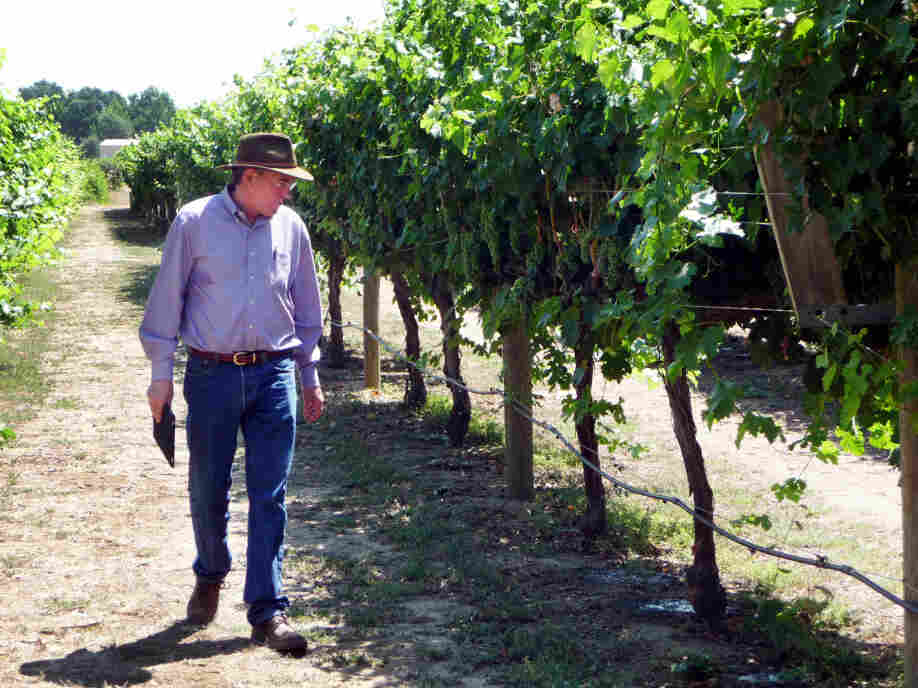 Grape breeder Andy Walker of the University of California, Davis inspects grapes on the campus vineyard. Walker says some Spanish or Italian grapes would do better in warmer temperatures, but growing and marketing new varieties is a big investment. Lauren Sommer/for NPR hide caption

Prime California wine country areas like the Napa Valley could soon be facing rising temperatures, according to climate change studies. So some wineries are thinking of switching to grapes that are better suited to a warmer climate. But when vineyards have staked their reputations on certain wines, adapting to climate change is a tough sell.

The specific type of grape, or varietal, is how most of us think about wine. At one recent meeting of the San Francisco Wine Lovers Group, for instance, members listed pinot noirs, sauvignon blancs or cabernets among their favorite kinds of wine. All are well-known varieties grown in the California region.

The university's test vineyard grows hundreds of different wine grapes from around the world. The vast majority are unknown to consumers because most wineries focus on only a handful of French grapes that prefer cool climates.

Extreme heat can be the enemy of good wine; it destroys acidity, and changes color and aromatics, Walker explains. 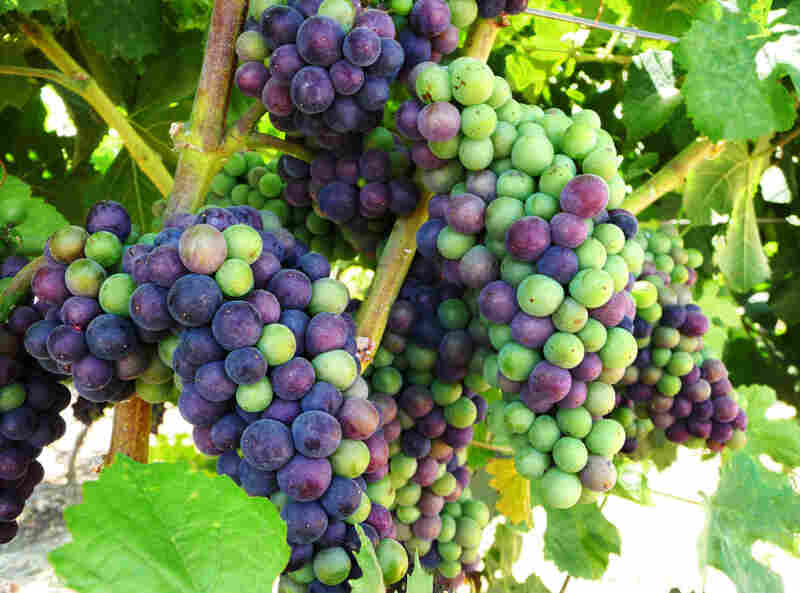 At the University of California, Davis test vineyard, researchers grow familiar grapes like chardonnay and pinot noir, and some unfamiliar ones like Nero d'Avola and Negroamaro. Lauren Sommer/for NPR hide caption

According to a recent study from Stanford University, about 2 degrees of warming could reduce California's premium wine-growing land by 30 to 50 percent. That could happen as soon as 2040. Water supply is also expected to be an issue.

"I think the interesting thing for me as a breeder is to take advantage of this and say, OK, let's actually re-adapt varieties to California," Walker says.

But Walker says grape breeding is frowned upon in the industry. Most vines are grown from a branch that's taken off an existing plant.

"This essentially means that grapes have not really been having sex very much," says Sean Myles, a geneticist at the Nova Scotia Agricultural College. Myles says breeding is big business for other crops like corn, but wine grapes miss that opportunity to develop adaptability.

You could cross-breed today's varieties to make them more heat tolerant or drought resistant. But Walker says there's a big problem with that: Once you breed your pinot noir with something else, you can't call it pinot noir anymore.

"The last decision is the hardest," Walker says. "Can we market this variety?"

Hurdles On The Marketing Side

Walker says there are wine grapes from Italy and Spain that would do well in a warmer California.

"We could produce Barbera instead, or Negroamaro or Nero d'Avola from southern Italy, and we'd be far better ahead," he says.

Nick Dokoozlian, a vice president at E&J Gallo Winery, the largest family-owned winery in the U.S., says in most cases the company is responding to a consumer demand for a certain cultivar. The company has been testing new wine varieties and has found some promising grapes, Dokoozlian says. But the problem is that they can't necessarily sell those varieties.

"Consumers aren't aware of them. Really, the hurdles on the marketing side are much, much more significant," he explains.

Since vines can produce for up to 30 years, Dokoozlian says switching varieties is a major financial gamble.

"The wine business is an extremely capital intensive business. The financial risk of planting the wrong variety in the wrong place is pretty significant," he says.

Still, given the temperature and water supply changes projected for California, Dokoozlian sees the market shifting — eventually. Andy Walker says it's up to the industry to make it happen.

"I don't think it's the consumer that's going to make the shift. They have to be directed," Walker says.

And that means it could be some time before we see world-class Nero d'Avola from California on store shelves.