Accessibility links
How Technology Is Eliminating Higher-Skill Jobs Machines used to take over work that was physically hard or dangerous or just monotonous. But one expert says that now the things that are easiest to automate are not the lowest-skill activities. Instead, higher-skill, better-paying jobs are being lost.

The U.S. economy hit an important milestone last week: Gross domestic product, the sum of all goods and services produced in the country, returned to pre-recession levels. But the gains were made with millions fewer workers. Part of the reason is technology, as computers and machines continue to replace humans. 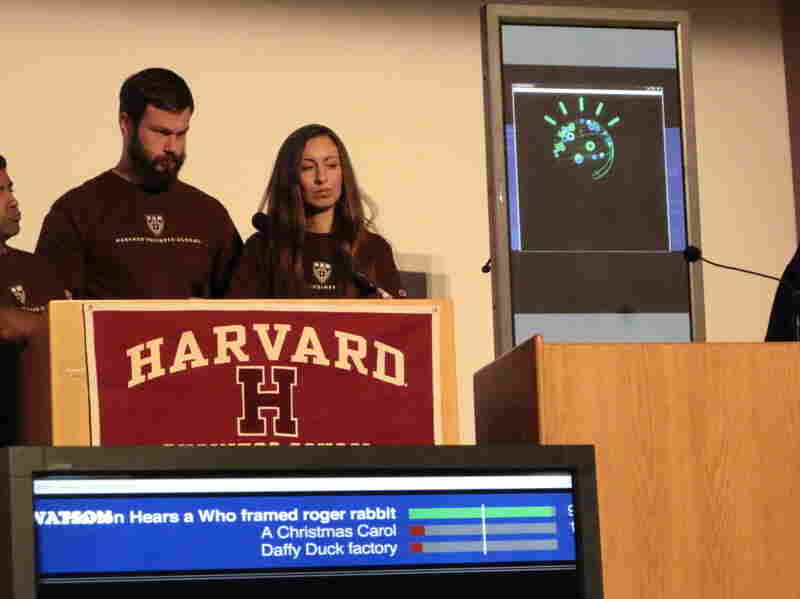 Harvard Business School's Jayanth Iyengar (far left), Jonas Peter Akins and Genevieve Sheenan held their own, but eventually lost to IBM's Watson in a game of Jeopardy at a conference on jobs and technology. Chris Arnold/NPR hide caption 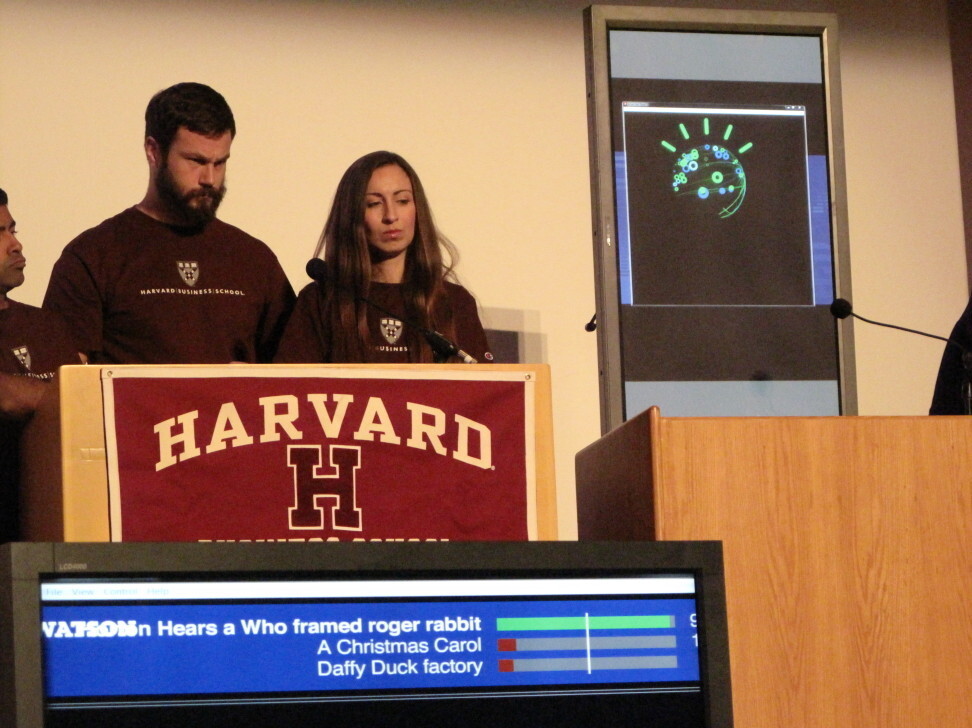 Harvard Business School's Jayanth Iyengar (far left), Jonas Peter Akins and Genevieve Sheenan held their own, but eventually lost to IBM's Watson in a game of Jeopardy at a conference on jobs and technology.

We used to think about machines taking over mundane jobs, like twisting a screw into a toaster on an assembly line over and over again. But more recently, technology is eliminating higher-skill jobs.

To talk about this, some of the nation's top technologists and economists came to Harvard and the Massachusetts Institute of Technology this week for a jobs conference called Race Against the Machine. There was a very impressive machine on hand: Watson, the powerful Jeopardy-playing computer built by IBM that recently beat the all-time human Jeopardy game show champion.

This week Watson took on two teams from MIT and Harvard. The auditorium was packed with students. Although Harvard managed to do well, its team was no match for the powerful computer.

Only tepid applause greeted Watson after it correctly answered questions about things like a truncated icosahedron (soccer ball-shaped). Maybe the reason human beings don't tend to clap for Watson is that we can instinctively sense that it might steal our jobs.

"We see already that the work of legal discovery — in other words, sitting around and reading huge volumes of documents at the early stage of a lawsuit ... is being very quickly and very heavily automated," says Andrew McAfee, an MIT researcher who helped organize the conference and is co-author of Race Against the Machine. "And by one estimate, it lets one lawyer do the work of 500."

The world will still need brilliant human courtroom litigators, but not as many junior lawyers and paralegals. McAfee also says we won't need as many tax preparers. More complex manufacturing is being done by machines, which means even fewer auto workers. So where is all this headed?

"There's been a long-running debate about does technology eliminate jobs," says David Autor, an MIT economist who spoke at the conference. 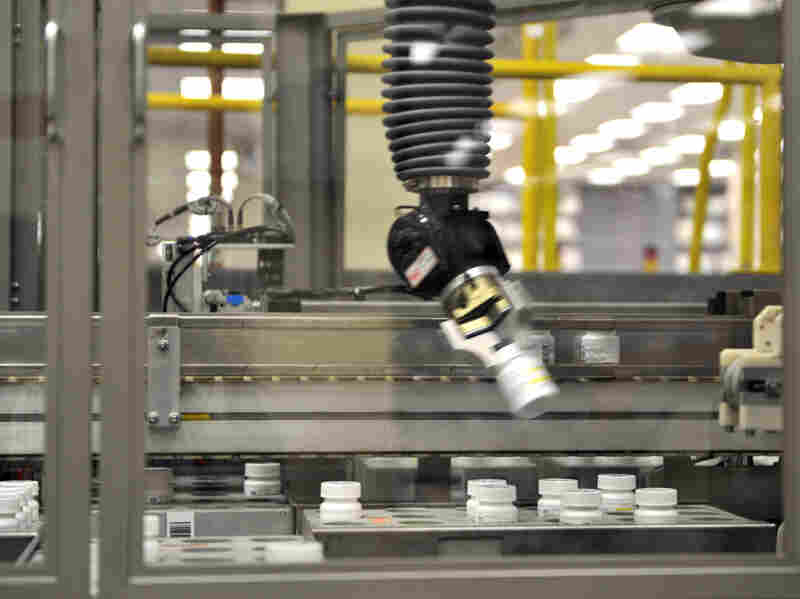 An automated robot arm picks up a bottle of prescription pills in the Medco pharmacy plant in Willingboro, N.J. Medco's state-of-the-art automated pharmacy can dispense up to 1 million prescriptions a week. Stan Honda/AFP/Getty Images hide caption 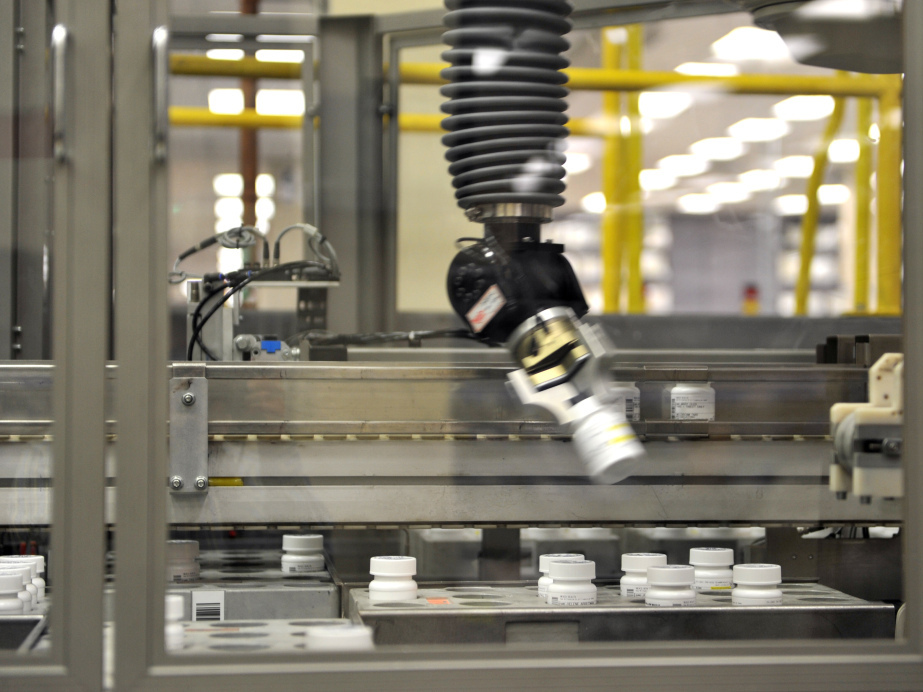 An automated robot arm picks up a bottle of prescription pills in the Medco pharmacy plant in Willingboro, N.J. Medco's state-of-the-art automated pharmacy can dispense up to 1 million prescriptions a week.

He says it's not like every job a machine takes over leaves one person permanently out of work.

"Back at the turn of the 20th century, about 38 percent of all American workers were working on farms. At present, it's 2 percent," Autor says.

Machines took over a lot of farm work, but new industries and new jobs were created. Overall, Autor says technology improved people's quality of life, including advantages like better health care and rising incomes over the past 100 years.

But Autor also has his worries. He says machines used to take over work that was physically hard or dangerous or just monotonous. But now, he says, we're losing higher-skill, better-paying jobs to machines — like bank tellers, airline check-in agents, accountants and whole floors of actuaries in insurance companies.

Meanwhile, computers still aren't very good at many menial labor jobs like cleaning bathrooms and other janitorial work; we still need humans for that. So it turns out that for many very low-skill jobs, there's still demand. For high-skill and high-touch jobs like being a good manager at a company, a doctor or a nurse, we need humans. But many middle-skill, middle-class jobs are where we're seeing the squeeze.

So going forward, the worry is there's going to be a greater need for people to do minimum-wage restaurant busboy-type work and less need for $30-an-hour office workers.

Other economists say innovation will save the day: New industries and new technologies will spring up with new kinds of jobs for people that we can't yet anticipate.