Accessibility links
Obama's Pipeline Decision Must Balance Jobs, Environment In the coming months, the Obama administration must decide whether to approve an oil pipeline that would carry tar sands oil from Canada through the U.S. The decision will divide his political base: labor, which says the pipeline would create jobs, and environmentalists, who worry about its impact. 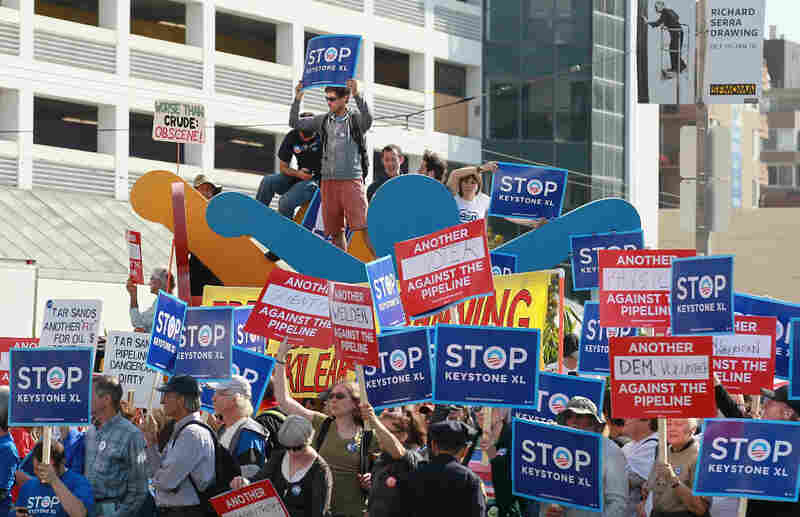 Protesters demonstrate last month against the construction of the Keystone XL oil pipeline outside the W Hotel in San Francisco, before the arrival of President Obama, who was holding a fundraiser. Justin Sullivan/Getty Images hide caption 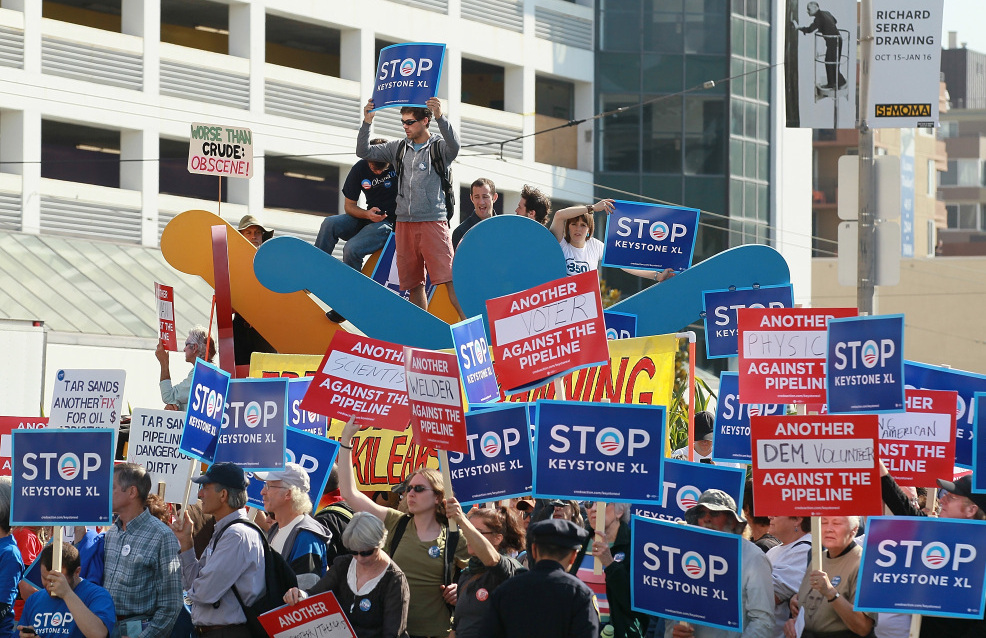 Protesters demonstrate last month against the construction of the Keystone XL oil pipeline outside the W Hotel in San Francisco, before the arrival of President Obama, who was holding a fundraiser.

In the coming months, the Obama administration will decide whether to approve the Keystone pipeline, which would carry tar sands oil from Canada through the U.S. down to the Gulf of Mexico.

Environmental advocates will try to encircle the White House on Sunday in a show of solidarity against the project. Steady protests have made this one of the most high-profile environmental decisions of the Obama presidency.

White House spokesman Jay Carney often tries to distance the president from the decision-making process over the pipeline.

"The review of this decision is housed at the State Department, by executive order," he said Wednesday.

That's because it's an international project; the State Department will send a report to the White House with recommendations.

And yet, as Carney acknowledged: "This is the Obama administration. And we certainly don't expect, and the president doesn't expect, and you should not expect that the ultimate outcome of this process will do anything but reflect the president's views."

In other words, the president will ultimately decide whether to give a red or green light to the oil pipeline. It will inevitably divide his base, says Josh Freed, vice president for the clean energy program at the centrist Democratic think tank Third Way.

"Labor unions are big supporters of building the Keystone pipeline," he says. "Environmentalists who've been frustrated with several other decisions the president has made over the last three years have turned this into a proxy to see whose side of many environmental issues the president stands on."

That's how the environmentalists describe this fight, too: a test of how much this president really deserves their support.

"This pipeline and an increased tar sands expansion will undermine all of the good work that the president is trying to do in terms of reducing our use of oil and reducing greenhouse gas emissions," says Susan Casey-Lefkowitz of the Natural Resources Defense Council.

On the other hand, labor groups say the pipeline could create jobs.

For Protesters, Keystone Pipeline Is Line In Tar Sand

The environmentalists and the unions might both be right.

It's not the first time the president has been forced to choose between two conflicting parts of his political base. In September, he abandoned tougher air quality rules under pressure from business groups that said the regulations would cost thousands of jobs.

Robert Mendelsohn, a professor at the Yale School of Forestry and Environmental Studies, says that's to be expected in this economy.

"People don't want to see the environment raped and ruined, but on the other hand, they don't want to be unemployed," he says. "So [Obama's] looking for the right balance, and right now it seems the economy is more important."

Looking for the right balance is pretty much how President Obama describes it as well. In an interview with a Nebraska TV station this week, he said he's trying to take the long view.

"We need to encourage domestic natural gas and oil production. We need to make sure we have energy security and aren't just relying on Middle East sources," he said. "But there's a way of doing that and still making sure the health and safety of the American people and folks in Nebraska are protected."

Freed says you can't just pull the bottle out of the baby's mouth.

"Because the baby still needs to eat, and right now virtually every car and most of the trucking fleet in the United States relies on either gasoline or diesel fuel, and you can't switch over in one year or five years or 10 years," he says. "It's going to take a long time."

But the U.S. still sucks down around 19 million barrels a day, which means there's a long way to go until America's thirst is quenched.