Accessibility links
Weekly Standard: In Defense of the Triad In recent months, the use of nuclear weapons in the U.S. has come under fire. The Weekly Standard's Elbridge Colby and Paul Lettow explain why we shouldn't say no to nuclear.

Weekly Standard: In Defense of the Triad

Weekly Standard: In Defense of the Triad 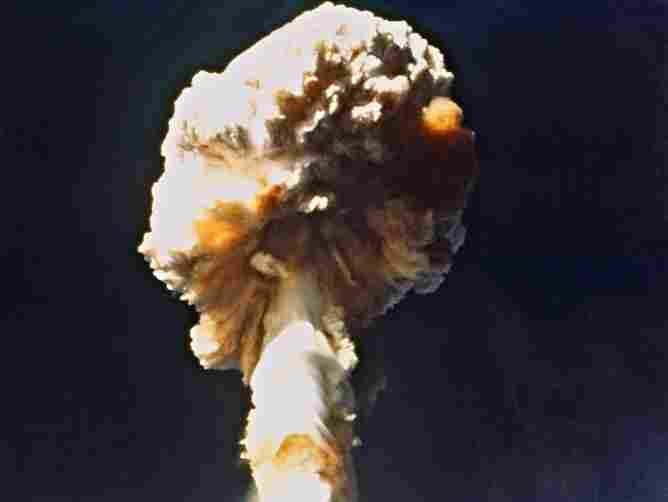 This picture taken in 1970 shows a French nuclear test at Mururoa, French Polynesia. France carried out some 40 atmospheric atomic tests in Polynesia from 1966 to 1974. AFP/Getty Images hide caption 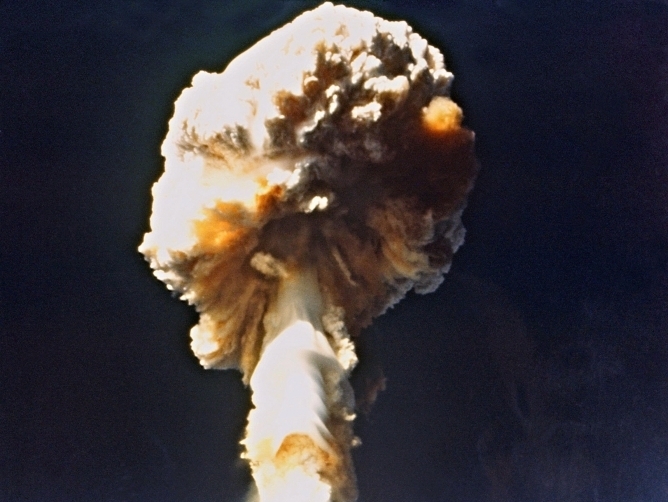 This picture taken in 1970 shows a French nuclear test at Mururoa, French Polynesia. France carried out some 40 atmospheric atomic tests in Polynesia from 1966 to 1974.

Read Another Opinion On Nuclear Weapons

Elbridge Colby served on the Defense Department New START negotiation and ratification team and as an expert advisor to the Congressional Strategic Posture Commission. Paul Lettow is the author of Ronald Reagan and His Quest to Abolish Nuclear Weapons and served as senior director for strategic planning on the National Security Council staff from 2007-2009. The views set forth here are the personal views of the authors and do not necessarily reflect those of any organization with which they are associated.

In recent months, voices on the left have argued that the United States should abandon the strategic "triad" of nuclear weapons systems – intercontinental ballistic missiles, ballistic missile submarines, and heavy bombers. Some cite economic reasons, others say that the United States does not need or should not have a full triad given President Obama's nuclear abolition agenda, and still others argue that scarce resources would be better invested in more "usable" capabilities. On October 11, for instance, Congressman Ed Markey and several dozen disarmament-inclined House members signed a letter to the supercommittee urging the panel to make major cuts to the triad. (Markey reportedly proposes eliminating at least one element of the triad altogether.)

This is nothing new. There have always been advocates against America's nuclear weapons. What is more ominous, however, is that doubts about whether the United States will or should maintain sufficient funds for the triad seem to be gaining traction. For instance, a nuclear expert at the White House has stated publicly that the United States has "reached the level in our forces where further reductions will raise questions about whether we retain the triad, or whether we go to a system that only is a dyad." A respected Pentagon nuclear policymaker, meanwhile, said recently that it is a very real possibility that the Defense Department will not be able to sustain the triad in light of the bleak budgetary environment. And the commander of U.S. Strategic Command, General Robert Kehler, also raised the question this month whether budgetary pressures might force a move to a dyad of delivery systems. Additionally, the Obama administration is conducting a "mini-Nuclear Posture Review" to find ways to reduce U.S. nuclear forces further.

But unless one is simply an adamant disarmer or thinks that nuclear weapons are totally irrelevant in light of America's current conventional and technological prowess, dropping the triad just does not make sense. Whatever nuclear policy different administrations choose to adopt now and in the future, maintaining the triad of delivery systems is a worthy investment. Why? Because it is stabilizing, it gives the president options, and it is a bargain.

We want our strategic forces to provide stability. Our nuclear weapons are the ultimate guarantor of U.S. national security, so we want our nuclear forces to give us the ability to strike back at any opponent no matter what that opponent does – and we want the opponent to know that. Today's triad does this. If an opponent figures out how to shoot down stealthy bombers and cruise missiles, we can respond with ballistic missiles. If it figures out how to track submarines, we have ICBMs and bombers. If it tries to take out our land-based forces, we have submarines at sea. The bottom line is that there is no plausible contingency in which an opponent could succeed in frustrating our ability to retaliate. This means there is no reasonable course of action leading to a major attack on the United States. Additionally, having multiple delivery options means that if one of our systems or its warheads fails – far from impossible given their age – there are backup systems that can compensate for such failure. The cumulative result is stability and deterrence.

All of this is true whether one believes the United States needs 1,550 deployed strategic warheads – the number allowed by the New START agreement – or not. Indeed, those favoring reductions should be particularly supportive of the triad, because the lower we go, the more precious each remaining warhead is, so we need to make sure it can survive a first strike.

Continue reading at The Weekly Standard.