Accessibility links
Texas Senate Investigates 'Pay-To-Play' Allegations A Senate committee is looking into a contract awarded to an engineering company that contributes prominently to Republican Gov. Rick Perry's campaigns. The $69 million contact, to manage hurricane disaster aid, was allegedly mismanaged — and the company had no oversight. 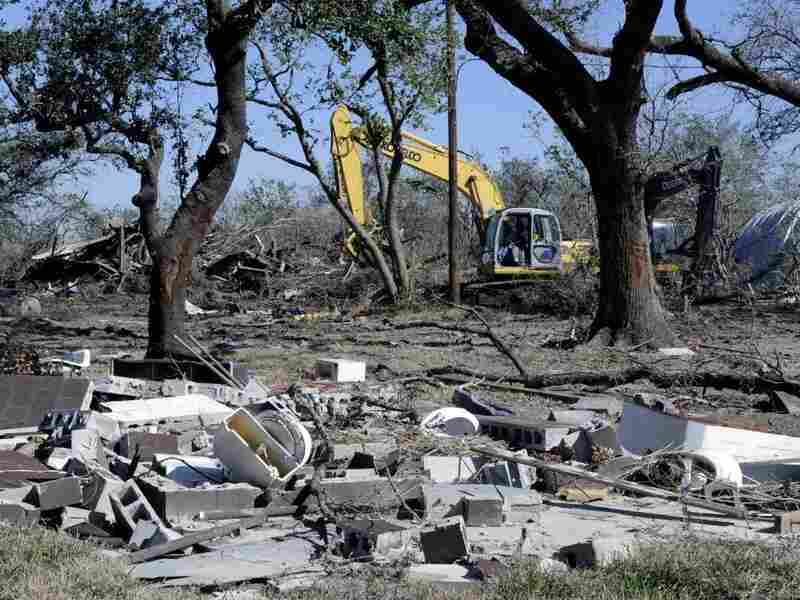 A track hoe sifts through Hurricane Ike debris in Smith Point, Texas, in 2008. In 2009, HNTB won a contract to manage disaster recovery, including the aftermath of Hurricane Ike. Pat Sullivan/AP hide caption 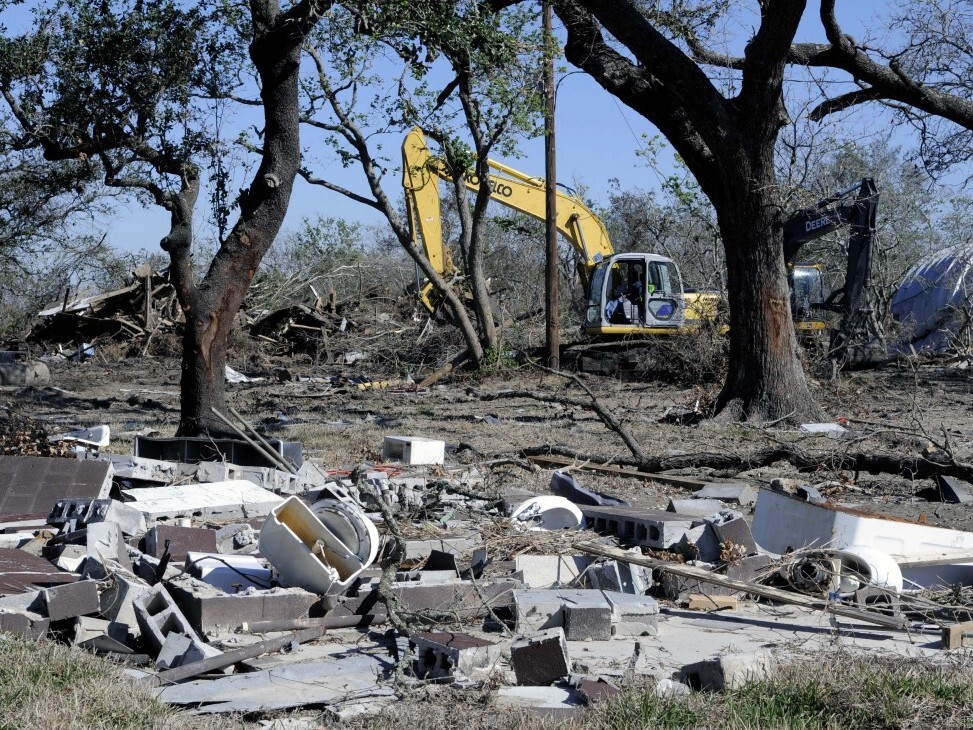 A track hoe sifts through Hurricane Ike debris in Smith Point, Texas, in 2008. In 2009, HNTB won a contract to manage disaster recovery, including the aftermath of Hurricane Ike.

A prominent campaign contributor to Texas Gov. Rick Perry is under investigation for mismanaging hurricane disaster relief. A Texas Senate committee is examining the state's contract with engineering firm HNTB, which critics say is the latest example of the pay-to-play culture that exists in Perry's administration.

Inside a hearing room in the Texas Capitol on Wednesday, a Senate committee tried to figure out how an engineering company spent millions of dollars in federal hurricane disaster relief with so little to show for it.

"When I look at the fees that are being charged, the principal received $333 an hour, the intern received $60 an hour. I'm trying to figure out where there's a reason?" says Sen. Royce West, a Dallas Democrat and chairman of the Committee on Intergovernmental Relations.

West is trying to unravel the troubled contract the state of Texas made with HNTB, an engineering giant headquartered in Kansas City, Mo.

In 2009, the firm won a contract to manage $1.4 billion in hurricane disaster aid from the U.S. Department of Housing and Urban Development. Shortly after the company got the $69 million contract, Perry eliminated the state agency charged with overseeing HNTB, as part of his larger crusade to streamline state government.

This is a classic example of pay-to-play in Texas. This is how things work in this state.

"During the time period that you guys were tasked with this responsibility and given this lucrative contract, the reality is the individuals that were dealing with disaster relief, many of those individuals were terminated — do you recall that?" West asked.

"I am aware of that," O'Grady replied.

The disaster relief work was, in effect, privatized. But the results were disappointing. The controversy over the contract was first reported by The Austin American-Statesman.

A HUD report said the state agency exerted no contract oversight, and consequently, HNTB collected 85 percent of its administrative expenses while completing only 15 percent of its projects, which ranged from debris removal to rebuilding streets.

The HNTB executive explained that heavy, upfront administrative expenses are required on this type of work. Nevertheless, the state terminated this contract in August, while other state contracts with the firm continue.

Perry's office this week wrote to HUD sharply asserting that the state is managing its federal relief funds better now, and he blamed earlier delays on HUD's "bureaucratic micromanaging."

The elephant in the hearing room was HNTB's political connections to Perry, whose appointees selected the engineering firm.

Company entities have given $57,000 to Perry's various campaigns, and gave $335,000 to the Republican Governors Association when Perry was chairman. Moreover, the company's top lobbyist in Texas was Ray Sullivan, who later served as Perry's chief of staff when the company won the big hurricane contract. Sullivan is also Perry's presidential campaign spokesman.

"This is a classic example of pay-to-play in Texas. This is how things work in this state," says Andrew Wheat, research director for Texans for Public Justice, a campaign watchdog.

Wheat studied the company's political activities and notes that many of the donations came from company executives who live out of state and are not constituents.

"It's coming from company officials who know Gov. Perry is buttering their bread," Wheat says.

A spokesperson for Perry emailed a statement that the HNTB contract was competitively bid, and the governor's office was not involved. And an HNTB spokesperson said: "Our company is awarded work on our qualifications. Any firm doing business in any state has a vested interest in the political leadership of that state."