Accessibility links
'Killing Bono': Rock 'N' Rivalry, Down Dublin Way Two would-be rock-star brothers struggle to make it in the music business, while a high-school rival outpaces them — in a little outfit called U2. 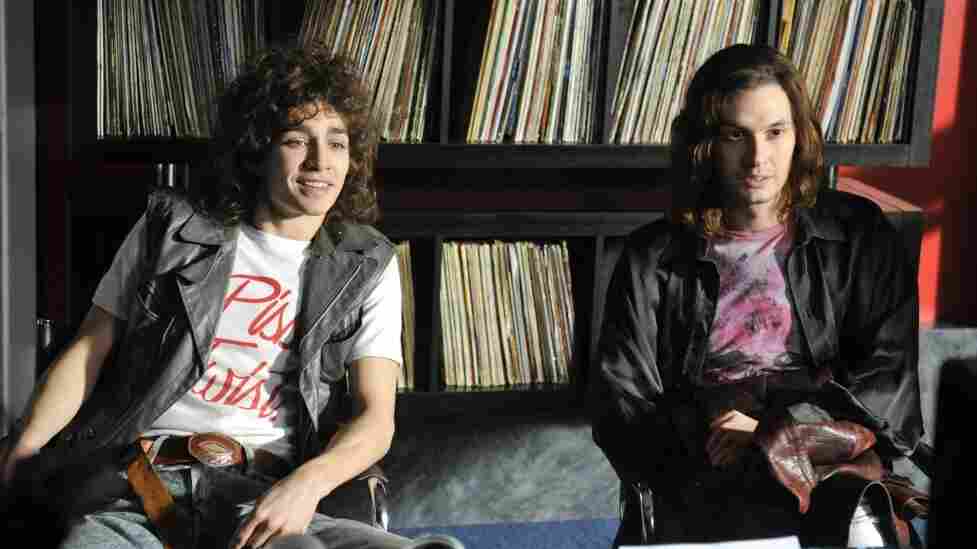 Most people who've paid attention to rock music over the last 30 years will have been annoyed by U2 frontman Bono at one point or another — but few casual bystanders will have been as peeved as Neil McCormick, a school chum of the future celeb who coveted just the sort of stadium-filling success his four classmates achieved.

'Your Gear Or Mine?'

From 'Killling Bono' - 'You Could Have Stopped This'

'You Could Have Stopped This'

No rock stars were injured in the making of Killing Bono, a semi-fictionalized retelling of McCormick's 2004 memoir, despite the picture's aggrieved title; in fact Neil himself (played by Ben Barnes) is the only main character the movie seriously lampoons. It's an amiable, lightweight romp that should interest fans of U2 and other '80s Irish rockers, but it would be more actively amusing if it didn't insist on portraying its title character (impersonated by Martin McCann) as such a bloody nice guy.

The story includes some classic tropes of Brit-rock legend, including the feuding brothers (see The Kinks, Oasis) and the bandmate who just missed the double-decker bus to fame (see Pete Best). Neil's original sin is that he secretly convinced Bono not to recruit his little brother for the Hype, the band that became U2. More than a decade later, huge posters for The Joshua Tree are plastered all over Dublin, and Ivan McCormick (Robert Sheehan) is still playing guitar for Shook Up, Neil's struggling group. (It's scrambling not just for success, but also for a style it can call its own and not U2's.)

Now a rock journalist for the British daily The Telegraph, McCormick did some late-'70s writing for Hot Press, Ireland's equivalent of Rolling Stone, and his cockiness earned him a few enemies there. One of them was happy to inform Ivan, years after the fact, that his brother had kept him out of what became perhaps the world's biggest rock band.

In the movie, this news does not go down well, especially since it arrives at roughly the same moment Neil has made the serious miscalculation of sleeping with the wife of the boss of Shook Up's record label. Also not pleased is Neil's American manager and girlfriend (Krysten Ritter) — who's called Gloria, the name of songs by both U2 and Van Morrison.

Booted from his band, Neil heads to Dublin for a showdown, impelled both by his resentment of U2 and the demands of a disgruntled Irish gangster who financed the brothers' failed run at Top of the Pops. But the movie's payoff fails to deliver the mayhem promised by its high-pitched prologue.

While Barnes and Sheehan are persuasive as the squabbling siblings, the music-biz mockery is blunt and obvious. Relying mostly on genuine songs of the period, director Nick Hamm twists Neil and Ivan into a variety of now-embarrassing '80s-rock poses, drawing on Devo, Wall of Voodoo, Adam and the Ants and others. Yet it's hard to accept that so earnest a wannabe as Neil would pursue such clownish paths to possible stardom.

A few digs at Bono's growing self-importance might have enlivened the proceedings, but perhaps McCormick and the filmmakers really do think he's a good egg. Or maybe they just didn't want to risk alienating someone who could deny them the use of a U2 song on the soundtrack.

The photo published on an earlier version of this review misidentified the actors pictured in it. A new, correctly captioned photo has replaced it.