Accessibility links
At The Met, 'Art Of The Arab Lands' Displays A Global Heritage After eight years of renovations, the Islamic galleries at New York's Metropolitan Museum of Art have finally reopened. Its 15 rooms consist of some 1,200 objects that cover everything from architecture and interior design to images of living things — which Islam discourages — and calligraphy.

After eight years of renovations, the Islamic galleries at New York's Metropolitan Museum of Art have finally reopened.

The 15 rooms of the New Galleries for the Art of the Arab Lands, Turkey, Iran, Central Asia, and Later South Asia consist of some 1,200 objects from a rotating collection of 12,000. They boast architectural splendors, including a Moroccan courtyard, a room dedicated entirely to carpets, and objects ranging from the most intimate to the most monumental.

The rooms are large and overwhelming, and while some of the displays are just what you'd expect, others are more surprising — at least to a layman.

High Art In The Muslim World

The new Islamic galleries feature as much secular art as religious art, and as might be expected, the written word is central. There are extraordinary examples of calligraphy in manuscripts, as well as paintings and pottery. 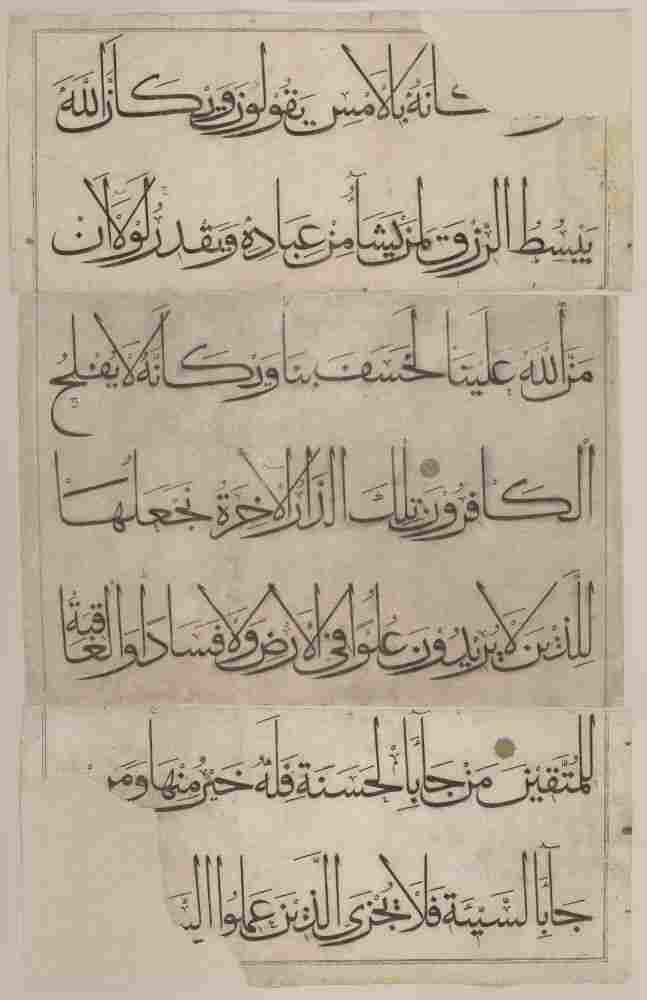 This page from the Quran stands as tall as an adult and originated in late 14th- to early 15th-century Uzbekistan. The Metropolitan Museum of Art, New York hide caption 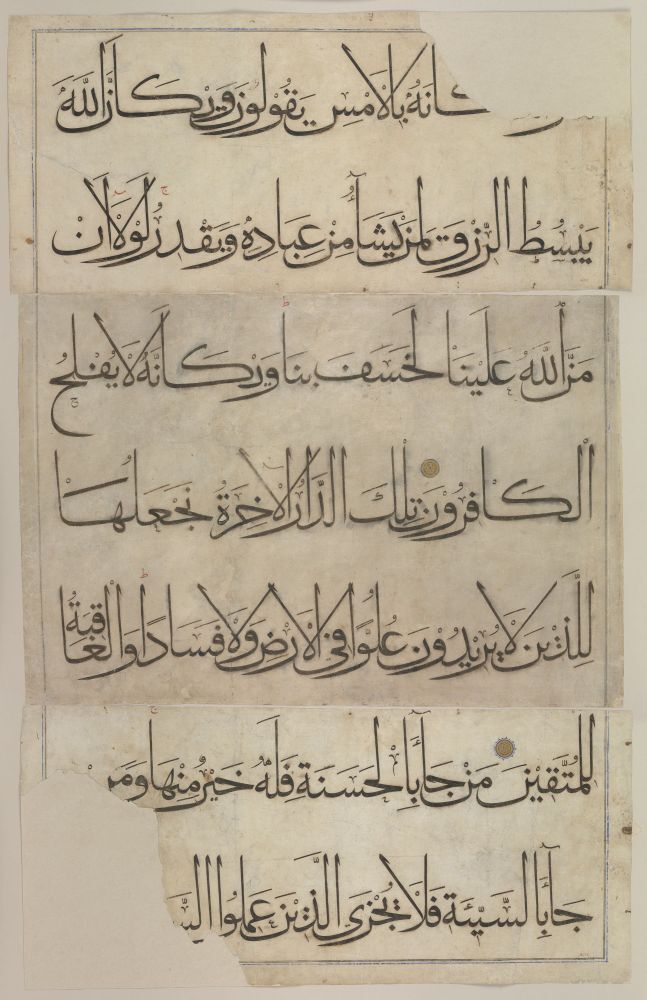 This page from the Quran stands as tall as an adult and originated in late 14th- to early 15th-century Uzbekistan.

Navina Haidar, one of the curators for the museum's Islamic art department, says there's a reason for all that writing.

"It's sort of the quintessential and highest form of artistic expression in the Islamic world," she says, "and also the most binding thread, artistically, between all the diverse cultures and types of media that you see."

In one room, a page from the Quran stands as tall as an adult. It's the room that many people enter first when visiting the galleries, and it's filled with masterpieces from the Met's collection. Not far from the Quran page, there's a 10th-century bowl from Iran; it's white with black letters, pure, simple and yet abstract — it could almost be a piece of modern art.

And then, a surprise: There are images everywhere — of animals, of dragons, of flowers, realistic paintings of people, a painting of a bat with one wing folded, and even architectural images on a prayer rug.

Haidar says the images are surprising because of the common notion that Islam forbids imagery — but that's not quite true. Yes, images of living things are discouraged in the religious sphere. "But," Haidar says, "they appear widely outside that context, especially when it comes to the illustrations of books and poetry and literature."

'A Sense Of Mystery'

The galleries' rooms are arranged to highlight the diversity and interconnectedness of the different Muslim cultures, but they also demonstrate ties to other, unexpected peoples — like the Romans, the Chinese and the Europeans. The rooms hold 13 centuries of works from Spain to Turkey, and Iran to India. 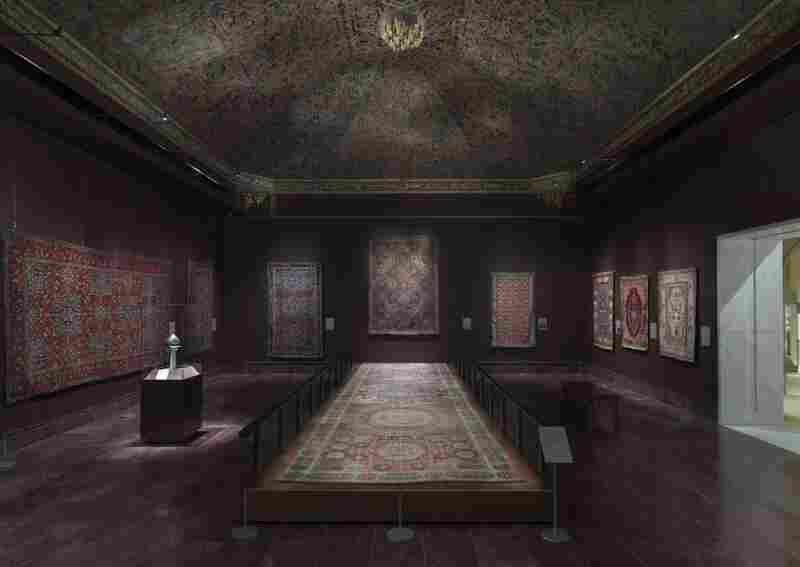 In the Ottoman carpet and textile gallery, each piece is individually lit against a dim background. The Metropolitan Museum of Art, New York hide caption 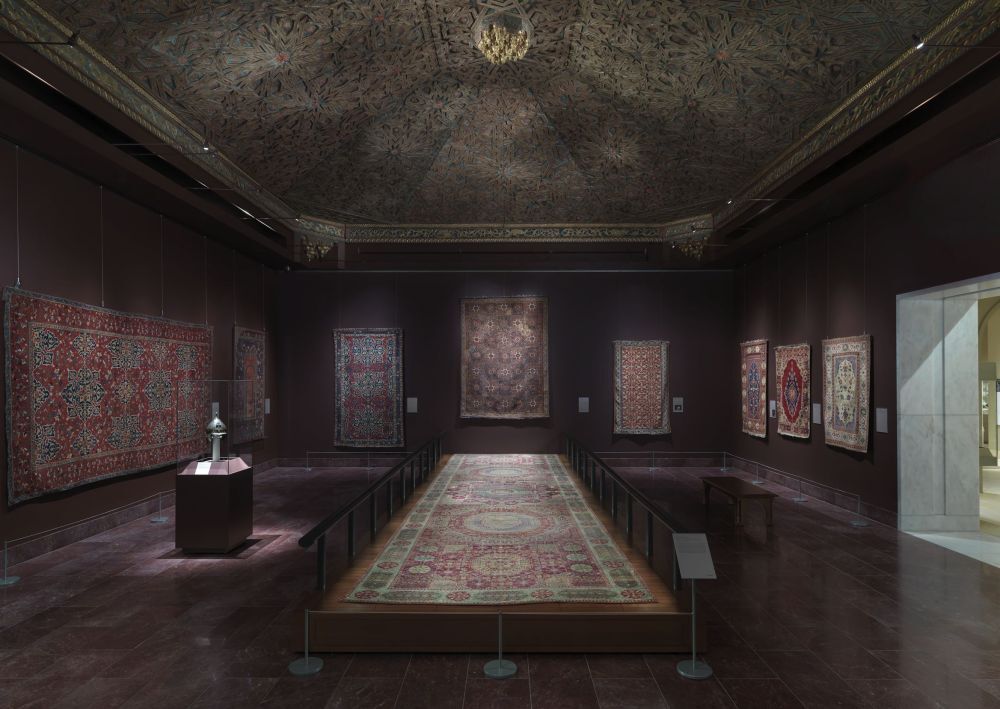 In the Ottoman carpet and textile gallery, each piece is individually lit against a dim background.

The confluence of these cultures is everywhere. For example, a little bowl from 12th- or 13th-century China shows a circular pattern of fish at the base. Next to it sits a bowl from Iran with the exact same pattern on it.

But the most startling thing about the galleries is their beauty. Take the carpet room, filled with Ottoman Empire masterpieces: Each carpet is individually lit, while everything around it remains dark.

"There is a sense of mystery," Haidar says, "because the eye can't quite tell where the light is coming from, what the logic of the light is. But it is there, and it adds to a certain atmospheric effect in this room."

The room holds so many carpets that it muffles sound, and although there are quite a few people in the room, it doesn't sound like the rest of the exhibit. Haidar says she believes there is a power in these objects, in their colors and their patterns.

"The fact that you are enveloped in this room, in a world of stars, medallions and interlocking forms, all in these beautiful warm colors," she says, "it takes you instantly into another sphere."

There is something meditative about the space.

The galleries also use architecture in a compelling way. Carved wooden window screens filter light into certain rooms, allowing shadows to play on the floor. If the sun isn't streaming in, you can look through the screen onto the Roman Sculpture Court below, allowing for yet another sense of interconnection. 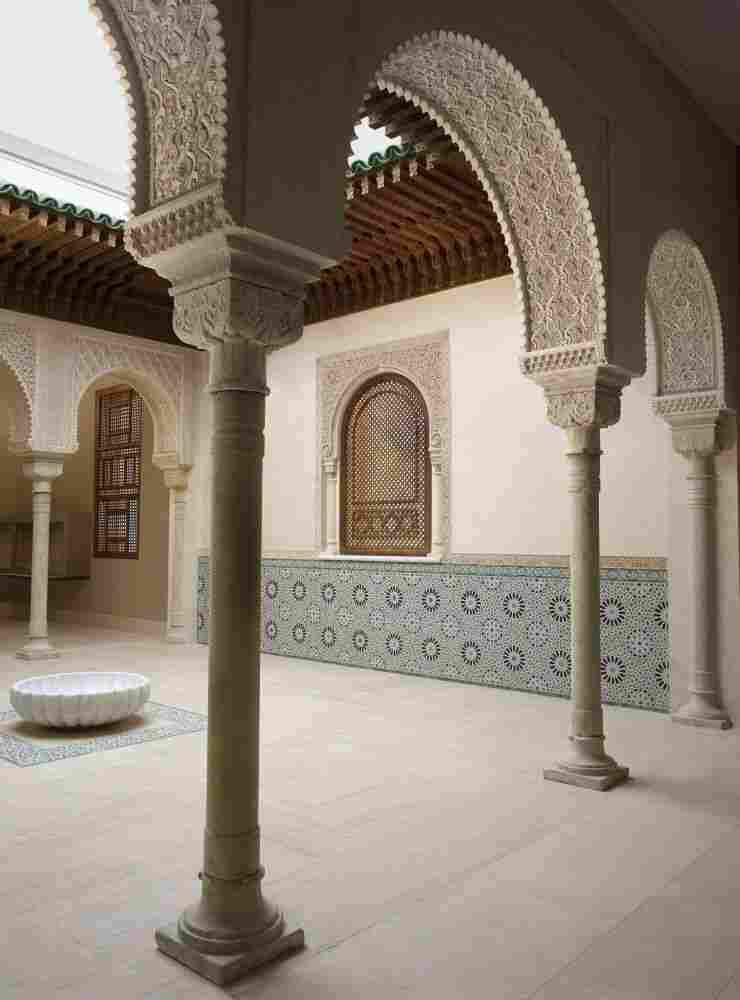 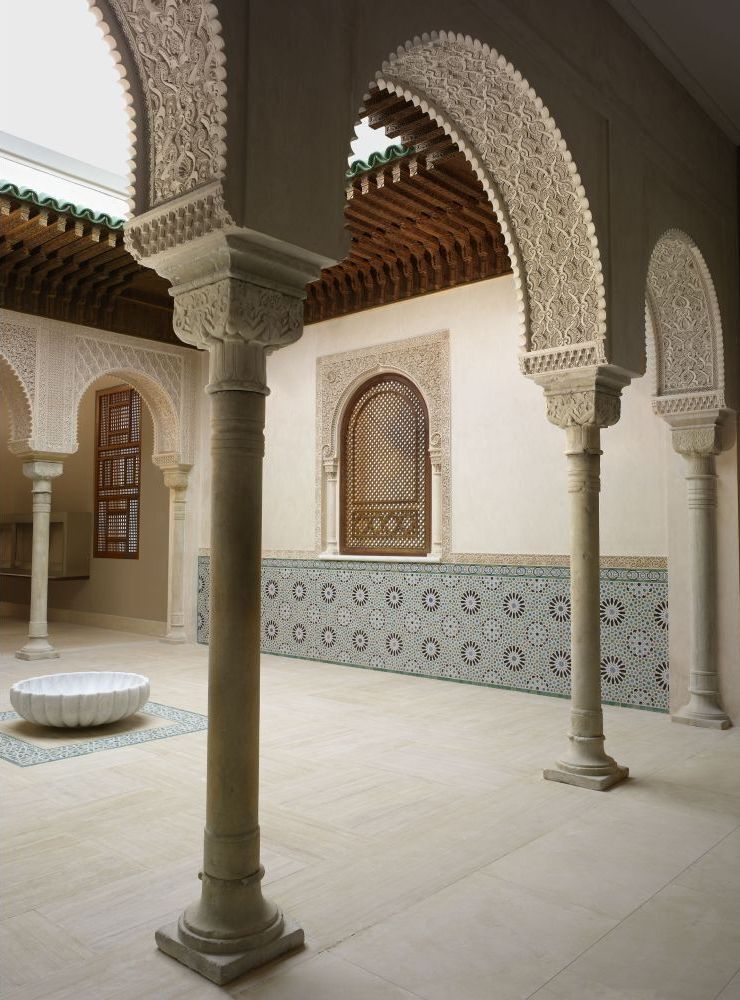 Then there's the Moroccan Court with a little fountain and places to sit. There were even rose petals in the water the day I visited. The court's columns are objects themselves — from 13th- to 15th-century Spain — but the woodwork, the tiles and the plaster carvings were all made by modern artisans from Fez, Morocco.

"The idea was to create this Islamic space to show the living traditions of the Islamic world, and also to create an area where you don't have to look at anything," Haidar says. "You don't have to read a label; you can sit on the bench, relax, look at the fountain."

And, perhaps, just think about what you've seen.

'A Wider And Deeper Perspective'

It took nearly a decade for a huge team to put the Met's new galleries together. They were doing it all in a post-Sept. 11 America in which their very subject — Islam — was constantly growing more politicized.

Haidar — who was raised in New Delhi by a Hindu mother and Muslim father — says that at first, Met curators and planners lived in a world of pure scholarship, ignoring the country's political realities. But after a while, she says they realized that, no matter what, everyone would be coming to the museum with their own world experiences.

Despite that, Haidar hopes people will still be able to experience the beauty of each object for itself.

"Each of these objects can take them way, way beyond their present moment," she says.

But she also hopes that the entire installation will lead to a further understanding of these cultures; to a place, perhaps, where visitors can understand something deeper.

"The same person who wakes up in the morning, reads the paper and has a certain idea about his world can come in here and be offered a wider and deeper perspective," Haidar says. "I think more than anything else, we have great faith in the collection itself; we believe in its power. And I personally feel that never has this collection had more power and meaning than now. And I have full confidence that anyone who comes with an open mind and an open heart will take a lot back home with them that they didn't have when they first arrived."