Accessibility links
For Wounded Marines, The Long, Hard Road Of Rehab Dozens of Marines from Darkhorse Battalion returned home with missing limbs and other injuries that will last a lifetime. Learning to cope with their injuries and figure out their futures is a slow, arduous process.

But these days, he can't run. Wounded in Afghanistan, Romo's legs are now just stumps, wrapped in khaki fabric.

Romo, a lance corporal, is one of dozens of Marines from the 3rd Battalion, 5th Regiment — known as "Darkhorse" — who have come to the Balboa naval hospital in San Diego, Calif., for rehabilitation work after the serious injuries they suffered in southern Afghanistan. A total of 34 Marines lost limbs.

On this day, Romo is doing an upper-body workout. A physical therapist helps one Marine with weights. Just outside, another Marine who lost a leg is now climbing a rock wall.

"We have to hold these guys back," said Michael Podlenski, a physical therapist at Balboa who works with as many as 30 amputees each day. "All these guys are very motivated. They wanted to be running yesterday."

Romo, 22, was on his first deployment when he lost his legs in February.

"I knew when I got hit that I lost both my legs. I knew right away," he said.

It was a day he remembers as "straight-up miserable." There was heavy rain, lightning and mud.

"If it hadn't been for the mud and all the rain and stuff, I probably wouldn't be here today. It muffled the blast," he said.

A Marine, Before And After 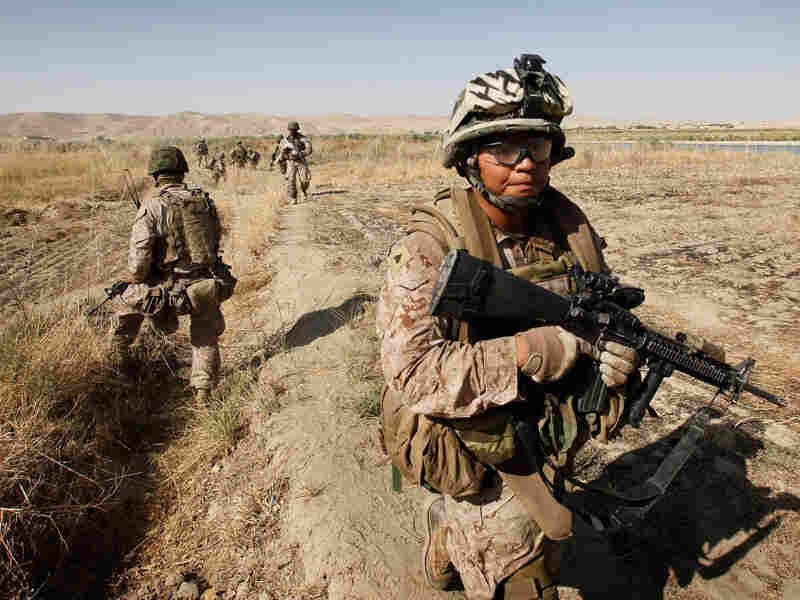 Cpl. Marcus Chischilly patrols in southern Afghanistan in October 2010. This photo was taken a day before he stepped on an explosive device and lost his left leg. Scott Olson/Getty Images hide caption 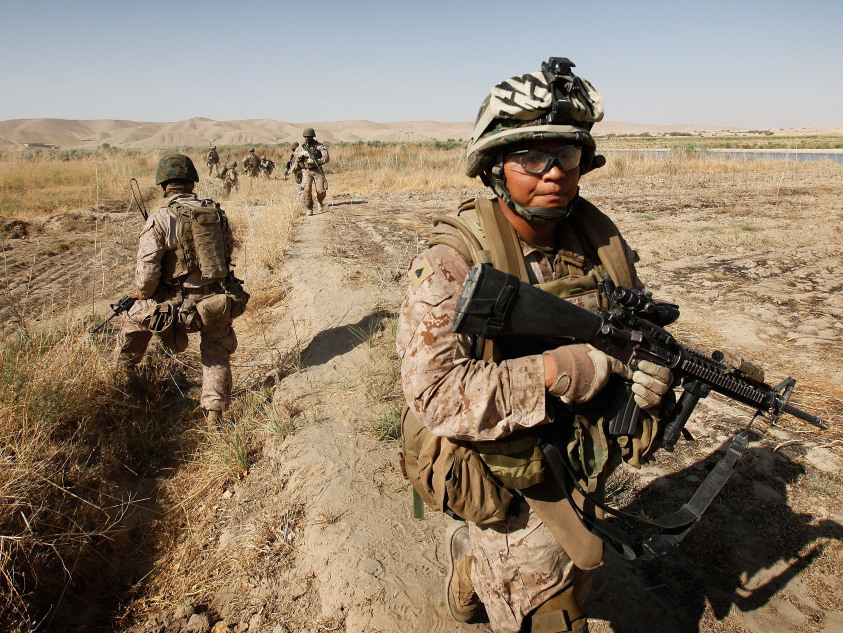 Cpl. Marcus Chischilly patrols in southern Afghanistan in October 2010. This photo was taken a day before he stepped on an explosive device and lost his left leg. 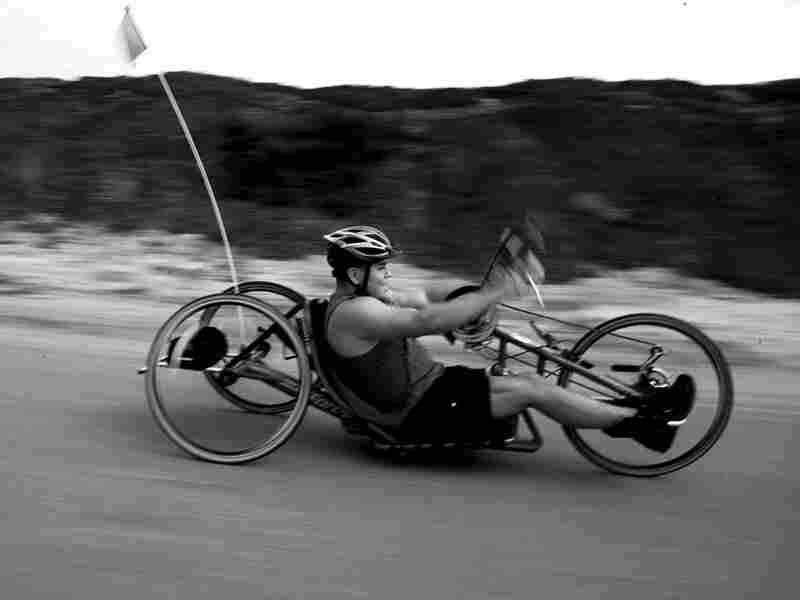 After losing his leg, Chischilly underwent rehabilitation in San Diego. He uses a recumbent bike equipped with hand pedals. He finished 16th in the wheelchair portion of the Marine Corps Marathon on Oct. 30 in Washington. David Gilkey/NPR hide caption 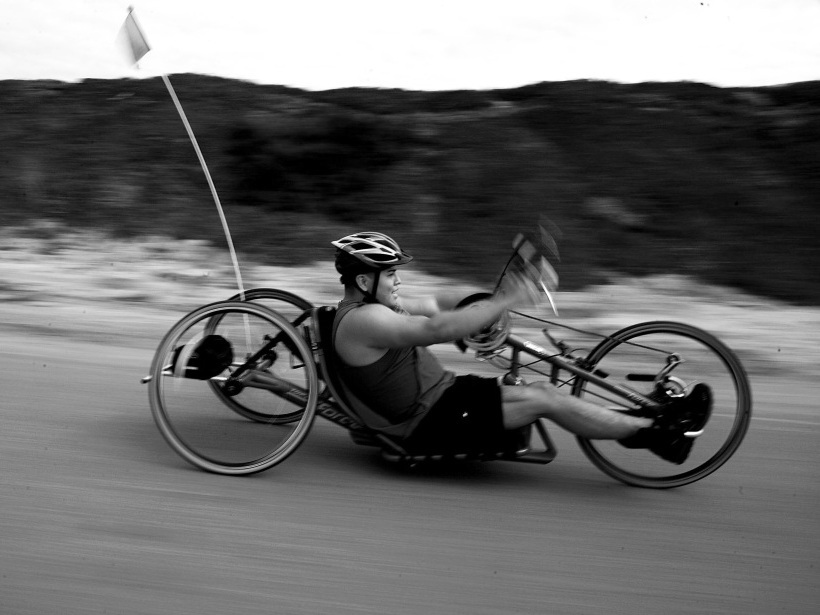 After losing his leg, Chischilly underwent rehabilitation in San Diego. He uses a recumbent bike equipped with hand pedals. He finished 16th in the wheelchair portion of the Marine Corps Marathon on Oct. 30 in Washington.

Now, Romo is determined he'll run again. He hopes to try in the next six to nine months, when he gets new prosthetic legs.

After Romo's workout, his wife, Michelle, drives him home. She pulls the van into their driveway. She opens the side door of the modified van, and Jake rolls down a ramp in his wheelchair.

His 2-year-old son, Liam, leads the way into the townhouse. Michelle holds their son Derren, born earlier this year, and talks about the day she received the call about Jake.

"Liam was sleeping, and I got the phone call. 'Is this Mrs. Romo ... Jacob Romo's wife?' And I knew right away who it was," she said. "I started to hyperventilate, and I need to breathe because I'm pregnant. And the guy was very sweet, he was so sweet. All I needed to get out was, 'Is he alive?' 'Yes, he's alive.' And I could calm down and take a couple of breaths."

The Marine who called her was reading from a statement — something about a bilateral amputee. At first, she wasn't sure what that meant. And then she was told his legs were gone.

Michelle was also worried about his spirit.

"And then he called us. It was such a huge relief," she said. "We could all rest that night. We could all sleep because he called, and he was in such good spirits."

As Jake recalls: "I was so heavily medicated, I couldn't tell you what month it was, let alone what I said. You'll have to ask her."

As Michelle remembers it: "I was just so relived that his tone of voice was so good, and he was laughing and he was calm, just himself. I could tell that he hadn't been damaged; that was my main concern — his mom's, too. After we talked to him, we got off the phone, we were like, 'He's going to be OK.' "

Jake Romo still believes that. He figures he'll get out of the Marine Corps and jokes that losing his legs might have actually improved his job prospects.

"I would never have had as many options if I hadn't gotten hit," he said. "I'm getting offers from private intelligence companies. I'm currently involved with a martial arts company I was involved with prior to the Marines Corps. For the last six months, we've been developing a serious self-defense program for guys in wheelchairs." 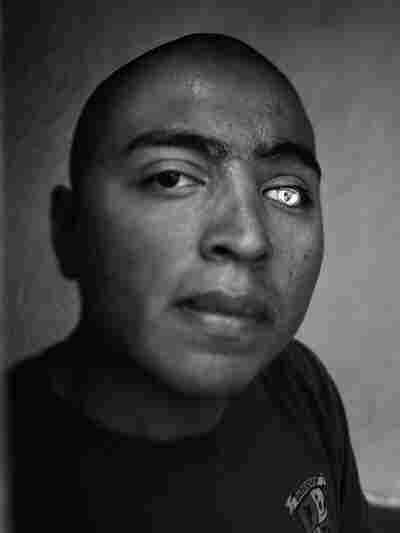 Lance Cpl. Josue Barron lost his left leg and left eye in Sangin, Afghanistan, while serving with the 3/5 Marines from Camp Pendleton, Calif. He now has a glass eye that is emblazoned with the 3/5 insignia. David Gilkey/NPR hide caption 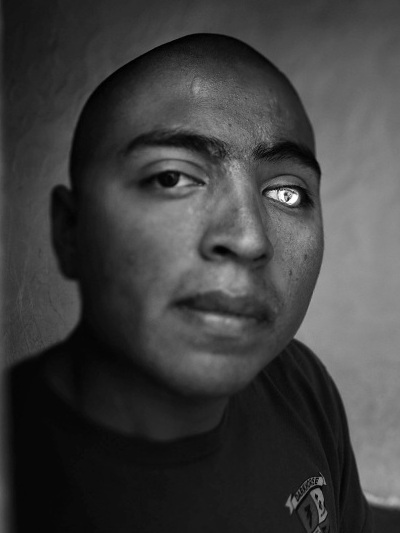 Lance Cpl. Josue Barron lost his left leg and left eye in Sangin, Afghanistan, while serving with the 3/5 Marines from Camp Pendleton, Calif. He now has a glass eye that is emblazoned with the 3/5 insignia.

So far, Romo, like many of the seriously wounded Darkhorse Marines, is doing pretty well. But it's been less than a year.

"We've got to track them, we've got to track them and see how things go long term," said Rear Adm. Forrest Faison, the man in charge of medical care for all Marines and sailors on the West Coast. "Because that will be the true indication of whether or not this was all successful. Five years from now, what do we see? How are we doing for families? How are we doing for suicide rates and things like that? All those things. It's way too early to tell."

On a bright San Diego afternoon, a handful of Marines sit on recumbent bikes, the kind equipped with hand pedals. The men all lost legs in Afghanistan in October 2010, the toughest month for Darkhorse Battalion.

Now they're getting set to do laps around a small lake. One of the men, Cpl. Marcus Chischilly, lost a leg after stepping on a roadside bomb. He'd like to go back out on patrol again in Afghanistan. But he knows it's unlikely. He doesn't want a desk job. So he's looking to leave the Marines and become an X-ray technician.

Lance Cpl. Josue Barron, who lost a leg and his left eye, also said he's going to get out of the Marines.

"It's not the same anymore," he said. "The career we wanted was infantry. That's what I joined to do. That's what the Marine Corps is all about. Might as well just get out and look for a better job."

Then there's Lt. Cam West, who thinks there's no better job than being a Marine. West was also wounded last fall, losing a leg.

He was out on patrol, walking behind his radio operator, Lance Cpl. James Boelk, who stepped on a roadside bomb. The blast killed Boelk and wounded West.

West eventually ended up at Bethesda Naval Hospital. He was groggy. He hadn't really been speaking. He woke up one day, and his parents were in the room. It was the first time they'd seen him since he'd lost his leg.

"It's good to wake up and see your mom and pops," he said. "My dad and me, we go back and forth, and we always quote John Wayne from his movies," West said. "He was there at the foot of the bed, and he said, 'Mas frijoles mamacita.' And I finished it out: 'Por favor.' It's from a great John Wayne movie, probably the greatest, The Searchers. My mom looked at him, and said, 'Ah, he's gonna be fine.' "

That was about a year ago. Since then, West has been working out and getting used to his prosthetic leg. He can ride a bike.

West wants to be one of the few Marines who has lost a leg but can still lead men in combat.

"Shooting, running and gunning like I did before, it's going to be a little trickier now," he said. "Definitely possible, but I'm not going to blow smoke."

Still, he has a fallback plan — becoming a rancher in Colorado. "If I don't do the Marine Corps thing, look for me poking cows, longhorns," he said.