Accessibility links
Millennials Uncertain Of Loyalty Toward Obama Young people were President Obama's most important age group in the last election. They knocked on doors, bought posters and gave his campaign a sense of vibrancy and excitement as they turned out to vote in record numbers. But now, it's not clear whether they will support Obama as they did in 2008. 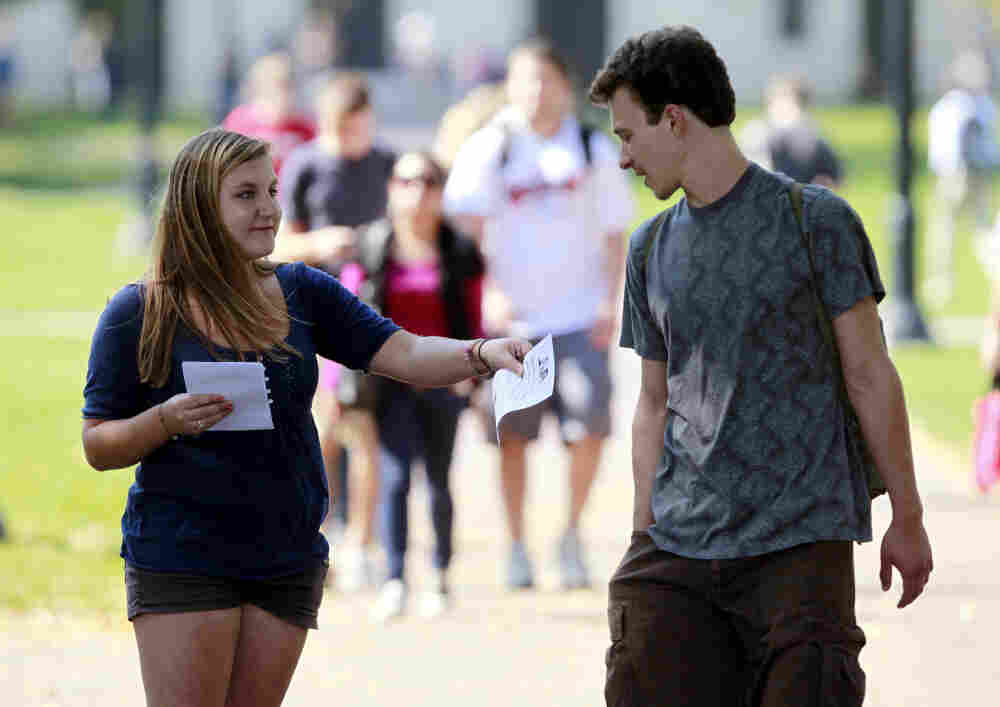 Genna Schwartz (left) of the Ohio State University Student Democrats tried to hand out information about President Obama's Oct. 17 visit to Ohio State and was turned down by a young man. The Obamamania that gripped college campuses two years ago is largely gone. Terry Gilliam/AP hide caption 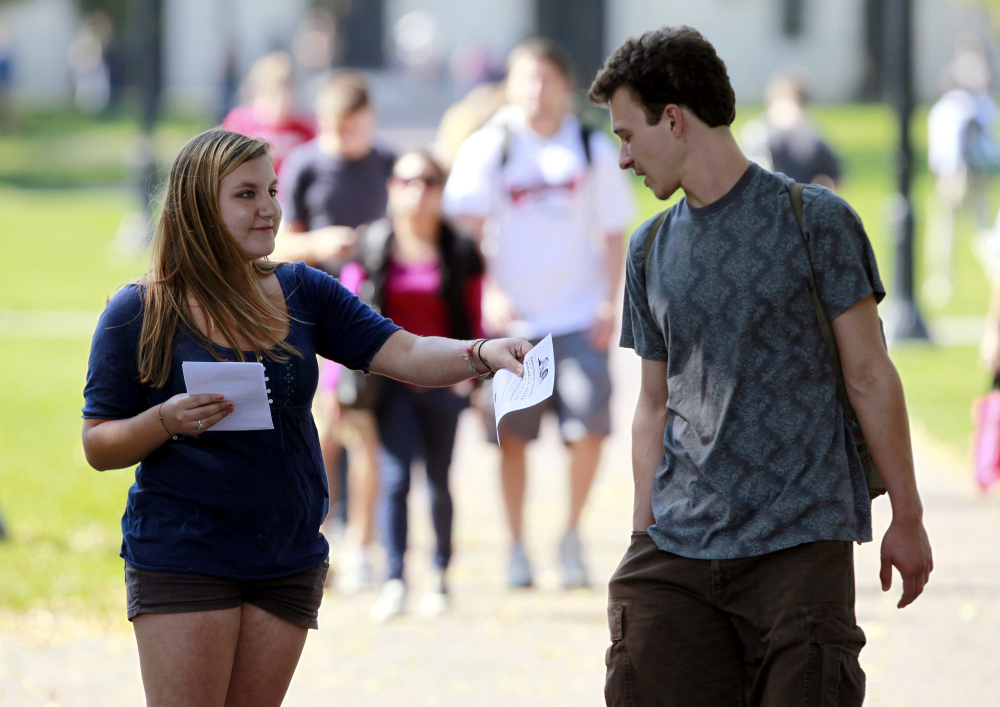 Genna Schwartz (left) of the Ohio State University Student Democrats tried to hand out information about President Obama's Oct. 17 visit to Ohio State and was turned down by a young man. The Obamamania that gripped college campuses two years ago is largely gone.

It felt like 2008 all over again in Philadelphia this week. A DJ played a song by the Black Eyed Peas to warm up a crowd of about 500 students from local colleges. President Obama's campaign manager, Jim Messina, exhorted the crowd at the University of Pennsylvania to volunteer, to apply for internships and, of course, to vote.

"There's 8 million registered voters who are 18 to 21 who weren't old enough to vote last time, who are going to cast their first vote, and they're going to do it for Barack Obama," Messina said. "Raise your hand if you're 18 to 21!"

President Obama needs a lot of help from this demographic if he's going to win a second term. In 2008, millennials — born between 1981 and 1993 — voted for Obama by a ratio of 2 to 1. They gave time, money and a sense of excitement to the campaign. And they came out to vote in record numbers.That's the largest margin of victory within any age group since 1972, according to the Pew Research Center. 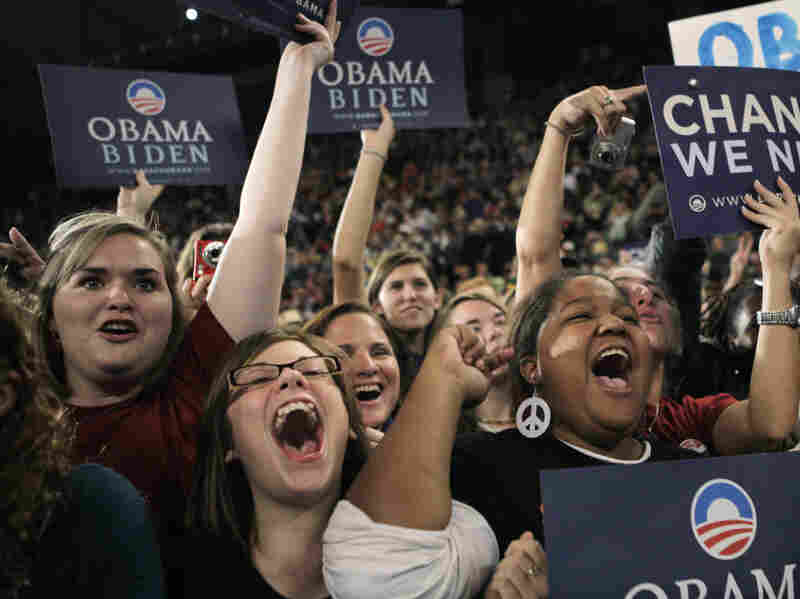 Millennials cheer for Democratic presidential candidate Barack Obama at a rally in Roanoke, Va., in 2008. Young voters are poised to play a key role in choosing the next president. Jae C. Hong/AP hide caption 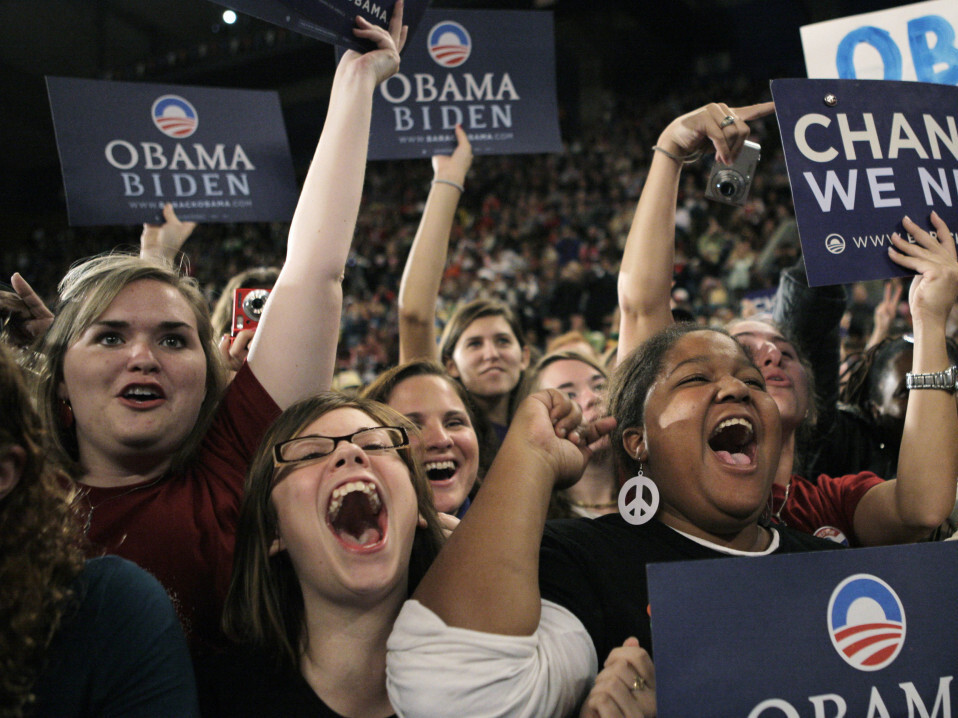 Millennials cheer for Democratic presidential candidate Barack Obama at a rally in Roanoke, Va., in 2008. Young voters are poised to play a key role in choosing the next president.

Alec Tyson, a research associate at the Pew Research Center, calls himself a card-carrying millennial.

Tyson — who was born in 1983 — helped prepare a Pew report called "Generational Politics." He says millennials are more ethnically diverse than other age groups. They're more likely than older voters to hold liberal views on social issues, and to express support for an activist government. Millennials still give the president a higher job approval rating than do other groups, at 49 percent. But Tyson says they're not as enamored of Obama as they used to be.

"Shortly after Obama took office, millennials expressed very positive emotions towards Obama," Tyson says. "They felt inspired or hopeful by him. Two years later, there's a sign that they've become, to use their own word, disappointed."

If you ask millennials to name the best president of their lifetimes, only 14 percent say Barack Obama. By far the most popular answer to that question is actually former President Bill Clinton.

Clinton's presidency left a lasting impression on millennials. According to Pew, 50 percent of them profess an affiliation with the Democratic Party, compared with just 34 percent who identify with the Republicans. Compared with older voters, millennials are more comfortable with immigration and interracial marriage, and more likely to say the country has gotten better since the 1960s. But in a development that may be ominous for Democrats, Tyson says fewer millennials say they're paying close attention to politics now than did in 2007.

"That's the key question for millennials in 2012, 'Will they turn out at the same rate as they did in 2008?' " Tyson says. "And some early signs suggest that enthusiasm is not as high in this current election as it was in 2008."

That's at least in part because there's no contested primary in the Democratic Party, as there was in 2007.

"There's not as much attention, because there's no primary going on," says Lillie Catlin, a junior at Bryn Mawr College and an Obama campaign volunteer. "He still has a job to do. So he's not campaigning as much. And there's not as much of a frenzy about who will we choose: We already know."

Catlin thinks millennials will turn out in big numbers next year. But Christopher Noble, a sophomore at the University of Pennsylvania, isn't so sure.

"These last four years have got people jaded," Noble says. "I don't think the turnout is going to be as great, unless there's some good marketing going on. People are just dissatisfied. That's the bottom line."

The economic downturn has been difficult for most Americans. But according to the Pew Research Center, the unemployment rate increased most sharply among millennials — which may help explain their disappointment with the president.

At a coffee shop in Philadelphia's trendy Northern Liberties neighborhood, Brooks Bell is working on his laptop. Four years ago, Bell volunteered his time putting up Obama posters. Now the 30-year-old clothing designer isn't sure he'll vote at all.

"I mean, it's a sad affair, I don't mean to bring you down here," Bell says. "I honestly don't know anyone that really cares about politics right now. Most people I know are focusing on themselves, and trying to figure how to get by in their day-to-day lives, you know?"

With the election just over a year away, there's still time for the millennials to rediscover the excitement they felt four years ago. But the Obama campaign has some serious work to do.