Accessibility links
New Republic: Romney And The Latter-Day Skeptics As Mitt Romney has ascended into the political sphere, his faith has also been thrust into the spotlight. But is Romney the best figurehead for his faith? The New Republic's Josh Patashnik outlines the Mormon movement against Mitt. 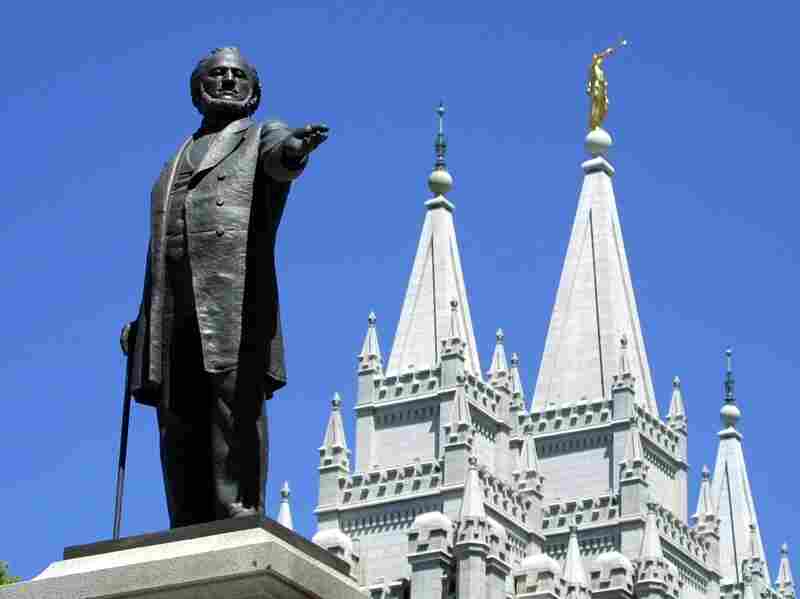 A statue of Brigham Young, second president of the Church of Jesus Christ of Latter Day Saints stands in the center of Salt Lake City with the Mormon Temple spires in the background 19 July 2001. Getty Images hide caption 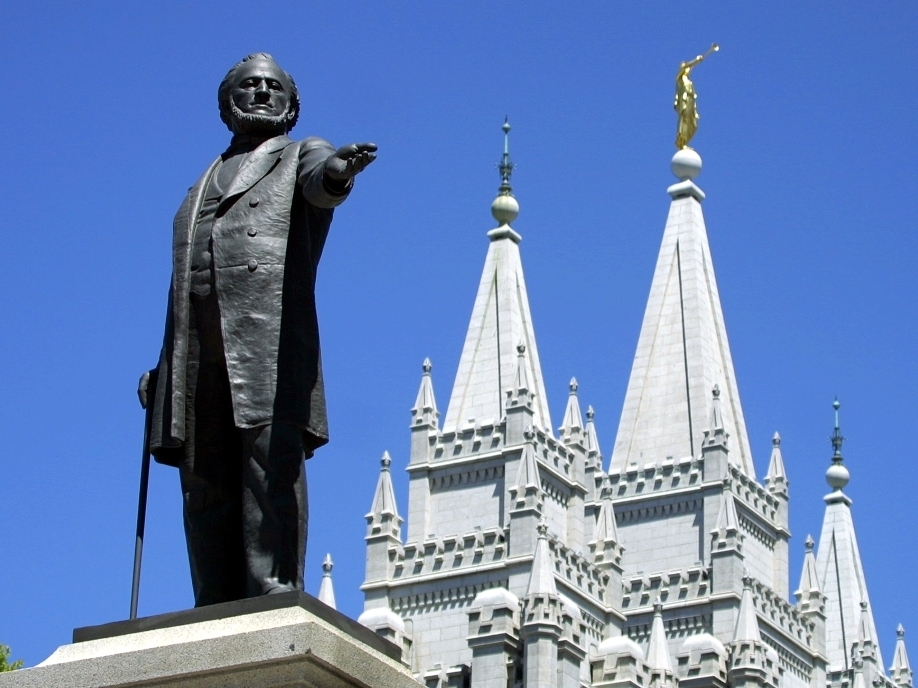 A statue of Brigham Young, second president of the Church of Jesus Christ of Latter Day Saints stands in the center of Salt Lake City with the Mormon Temple spires in the background 19 July 2001.

Josh Patashnik is a former reporter-researcher for The New Republic.

Mitt Romney has a well-earned reputation as a flip-flopper. But it's one thing to flip-flop on your politics, and quite another to flip-flop on your faith. So it came as something of a surprise when, during an interview earlier this year with George Stephanopoulos, the presidential candidate disputed the suggestion that Christ would someday return to the United States rather than the Middle East. Mormons, he said, believe "that the Messiah will come to Jerusalem. ... It's the same as the other Christian tradition."

Read Another Opinion On Romney And Religion

This was both technically correct and completely misleading: The church's position is that, while Christ will indeed appear at the Mount of Olives, he will also build a new Jerusalem in Jackson County, Missouri, which will serve as the seat of his 1,000-year reign on Earth. Romney had conveniently neglected to mention this part of his church's doctrine.

Needless to say, his fellow Mormons were none too pleased. "Brother Romney is playing a little bit of a political game with his answer," one church official told Lee Benson of the Deseret Morning News—in a column noting that Romney's comment had "caused more than a few members of The Church of Jesus Christ of Latter-Day Saints ... to scratch their heads as if to say, 'What the flip?'" Callers to a Utah talk-radio show lambasted the candidate for misrepresenting church teachings. And the Mormon blogosphere—known as the Bloggernacle—buzzed with discussion of the quote. One post on the blog Mormon Mentality condemned Romney for being "evasive," while another complained, "If he were so proud to be a Mormon, he should tell the truth."

Ever since they made their peace with the federal government and won statehood for Utah more than a century ago, Mormons have strained to overcome their status as outsiders. And Romney's run for president could represent a major step forward in that quest, accomplishing for Mormons what John F. Kennedy's 1960 presidential campaign did for Catholics: signaling that they are finally legitimate players in American life. "There's a feeling that this signifies, in some sense, that we've arrived," says Mormon historian Richard Lyman Bushman.

There's just one catch. Romney has vaulted to the lead in Iowa and New Hampshire largely on the strength of backing from evangelical Protestants—historical adversaries of the LDS Church, not to mention competitors in the worldwide race for converts. Worse, Romney is winning evangelical support by talking about his faith in a way that downplays its differences with mainstream Christianity—in other words, in a way specifically intended to make Mormons' beliefs sound like those of their longtime tormentors. Such rhetoric cannot help but vindicate evangelical feelings of superiority. No wonder a small but angry minority of Mormons are souring on Mitt Romney.

IN SOME WAYS, Mormons can understand Romney's predicament. Given that they spend two years of early adulthood seeking converts, most Mormons are well aware that connecting with people who are suspicious of their faith is no easy task. "A lot of us sympathize with Romney," says Elbert Peck, the former editor of Sunstone, a Mormon magazine. "We're a proselytizing religion, so we identify with what he's trying to do—find common ground."

But seeking common ground with adversaries doesn't always endear you to your own side—particularly when animosity between two groups runs deep. At the most basic level, Mormons regard themselves as Christians and want others to do the same. But a recent Pew survey found that a plurality of evangelicals do not consider Mormons to be Christians. "I understand he has to appeal to them for political purposes, but it makes me, as a Mormon, feel very, very queasy to see him doing it," says Greg Kearney, a computer programmer in Casper, Wyoming. "These people hate us, and they are so vitriolic—they think they get to decide who's Christian. I don't know if it's worth it."

Especially irksome to some Mormons are Romney's efforts to minimize the differences between their religion and traditional Christianity—differences that, in some cases, define the very essence of the Mormon faith. In a cover story last month in Newsweek, Romney was asked whether he had ever performed baptisms for the dead, a Mormon ritual in which the deceased of all faiths are posthumously baptized as Mormons in order to permit them to enter heaven. Romney, according to Newsweek, "looked slightly startled and answered, 'I have in my life, but I haven't recently."" This is not surprising—baptisms for the dead tend to be performed mostly by younger church members—but Romney's response made it seem as though he was embarrassed by an important church practice, one in which many Mormons have personally participated. "Baptism for the dead is really a fundamental Mormon doctrine, and for Romney to downplay it like that did alienate people," says Boyd Petersen, coordinator of Mormon studies at Utah Valley State College.

Continue reading at The New Republic.