Accessibility links
In Bangkok, Residents' Anger Rises With Floodwaters Flooding that has killed more than 400 people in Thailand continues to make its way south into the capital, Bangkok. Tempers are flaring as some residents complain the government is sacrificing poorer areas to the waters to protect more affluent and industrial areas closer to the city center. 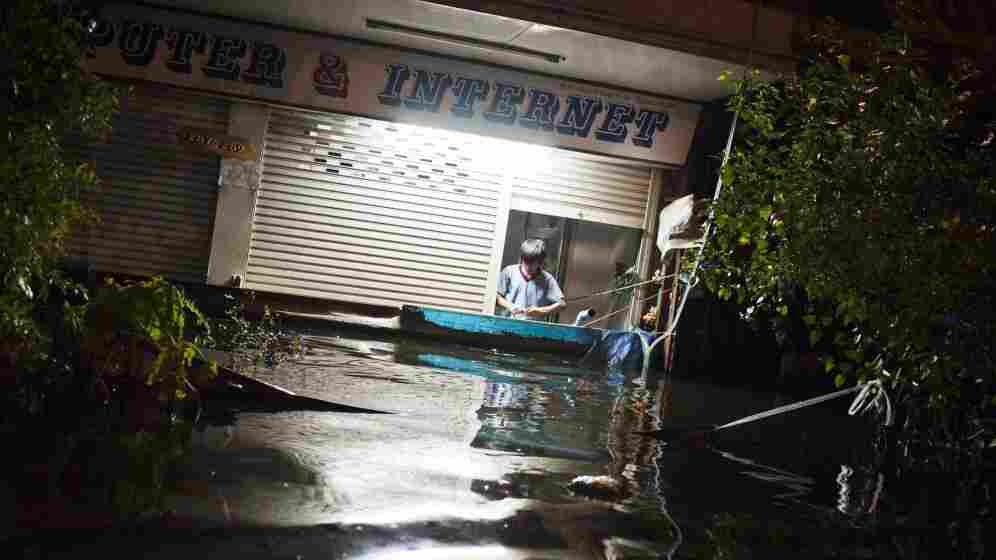 In Bangkok, floodwaters are rising in some parts of the city, leading to charges that the government is sacrificing the homes and businesses of the poor while protecting the rich . On the west side of Bangkok (shown here Nov. 1), areas are mostly submerged, while the opposite side of the Chao Phraya river is dry. Alexander Widding/Landov hide caption

Heavy monsoon rains that began two months ago in Thailand have killed more than 400 people and show no sign of abating as the floodwaters make their way south into the crowded capital, Bangkok.

Anxious residents have stripped store shelves bare of water, rice and other essentials as they wait. And tempers are flaring as some poorer residents complain that their homes and businesses are being sacrificed to protect more affluent and industrial areas closer to the city center.

Bangkok — which means the "city of angels" in Thai — dodged a bullet last weekend when the Chao Phraya river crested at a record high but did not burst its banks and flood downtown as feared.

The capital's business and commercial heart remains dry. Yet some residents of outlying districts say that's because the authorities directed the water toward their areas, putting them underwater. 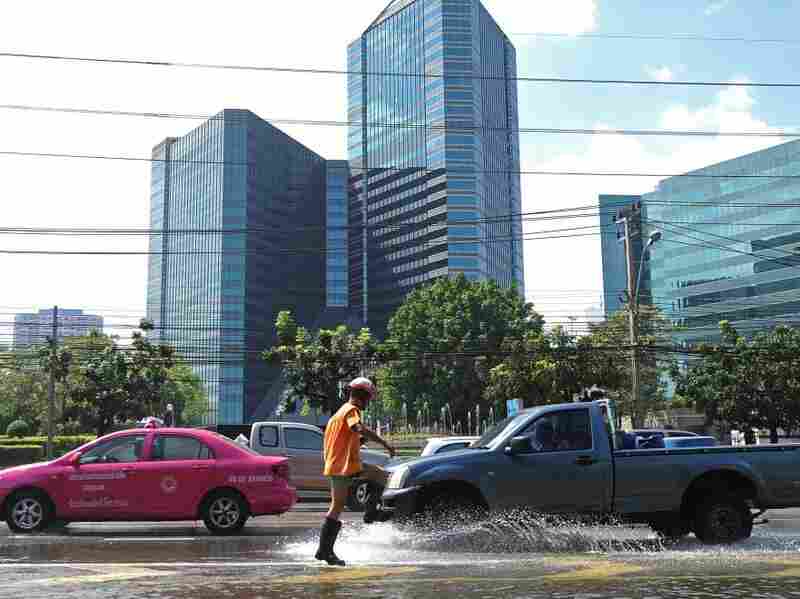 A traffic policeman directs vehicles during flooding in Bangkok on Nov. 3. Parts of Bangkok are being actively protected by floodgates, and water levels there are low. Pornchai Kittiwongsakul/AFP/Getty Images hide caption 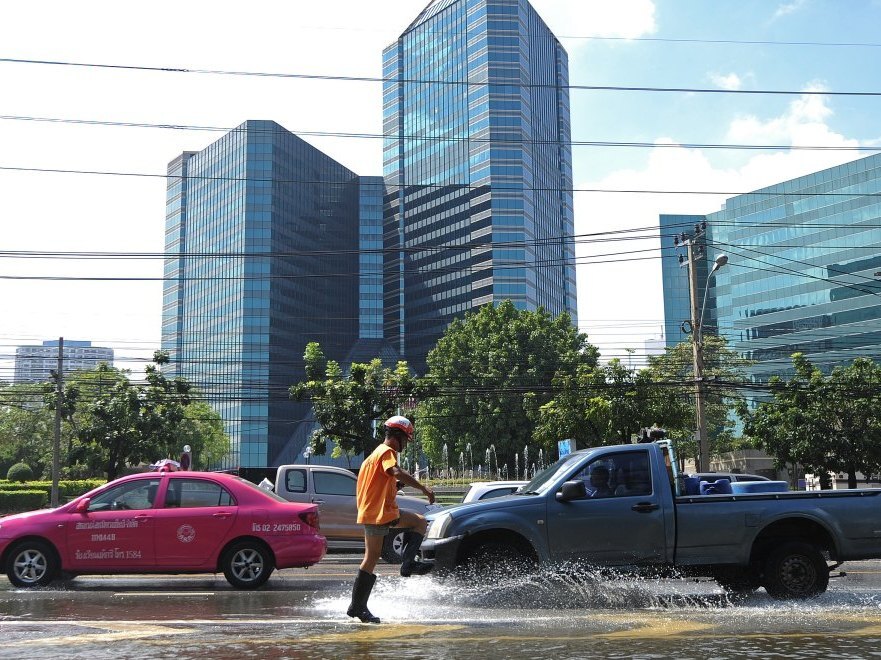 A traffic policeman directs vehicles during flooding in Bangkok on Nov. 3. Parts of Bangkok are being actively protected by floodgates, and water levels there are low.

One neighborhood in Bangkok's Sam Wa district is on the wrong side of the floodgates, literally. The water there rises up to the windows of the homes that line the canal, while dogs and their owners are squeezed together on stacks of sandbags or makeshift rafts.

Shopkeeper Saoem, who gives only one name, helps her sister wash dishes in front of her flooded home. She says houses in the area have been waist-deep in water for weeks.

A few days ago, angry residents decided to do something about it. They punched a hole in the nearby floodgate, hoping it would drain the water away from their homes and toward the city center. She knows it was wrong, she says, but people were just fed up.

The government always takes care of the rich people, but there are lots of factories on the other side of the floodgate that employ ordinary Thais, too, she says.

If those factories flood, she says, then those people won't be able to work, so the government should keep that from happening.

"I just wish they'd do something to help us get rid of the water here," she says.

Saoem is right about the business side.

The Bangkok area accounts for nearly half the country's GDP. The floods have already closed more than 1,000 factories, including several auto and computer hard-drive makers north of Bangkok in the tourist town of Ayutthaya.

Many factories are likely to be closed for months. And manufacturers are already warning of supply-chain disruptions worldwide. Flooded farmland means the country's rice crop is going to take a hit as well, and analysts say Thailand's economic growth rate for the year will be halved as a result of the floods.

But Thais are still better off than most in the region. Cambodia and Laos, in particular, also have been hit hard by recent flooding, and their governments are ill-equipped to help.

About a hundred yards from shopkeeper Saoem's house, municipal workers have now repaired the hole in the Sam Wa floodgate, and dozens of police are on hand to prevent local residents from punching a hole through it again. Police Col. Ake Ekasat says so far, so good.

"At the moment, it's quiet. The situation is quiet. But maybe they come again, you know?" he says.

Frustration is building all over the city, as more and more areas become flooded.

On Thursday, a large crowd of people demonstrated near the main airport — which has not been flooded — after the government opened several floodgates to protect a nearby industrial park. The demonstrators feared the water would inundate their land instead.