Accessibility links
Who Benefits When A Private Prison Comes To Town? Critics have long questioned the quality of private prisons and the promises of economic benefits where they are built. But proponents say private prisons not only save taxpayers money, but they also generate income for the surrounding community. 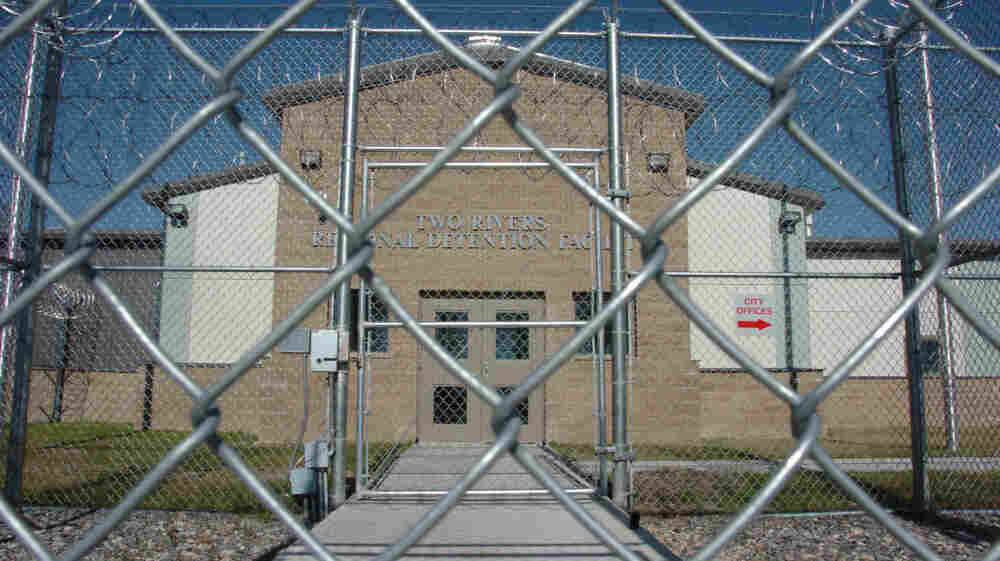 The entrance to the Two Rivers Regional Detention Facility in Hardin, Mont. The 464-bed detention facility was built with the promise of bringing jobs and stimulating the economy, but it has sat empty since it was completed in 2007. Matthew Brown/AP hide caption 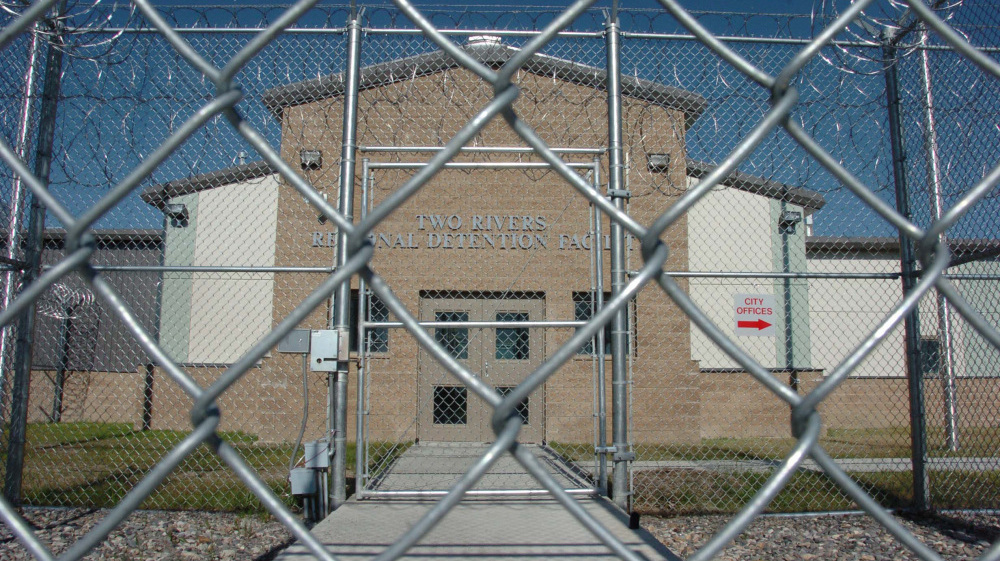 The entrance to the Two Rivers Regional Detention Facility in Hardin, Mont. The 464-bed detention facility was built with the promise of bringing jobs and stimulating the economy, but it has sat empty since it was completed in 2007.

Critics have long questioned the quality of private prisons and the promises of economic benefits where they are built. But proponents say private prisons not only save taxpayers money, but they also generate income for the surrounding community.

In 2004, officials in Hardin, Mont., agreed to a deal for a private prison to be built in town. The idea was that the county would pay for the prison and the state or federal government would fill it. Hardin would get tax revenues, new jobs and economic benefits while a private prison company would run the place and get a cut of the profits.

The Two Rivers Regional Detention Facility, a 464-bed $27 million private prison, was completed in 2007. Since then, the facility has remained empty and unused because the builder never landed a contract with the state or federal government for inmates.

In 2009, the facility made national news when, in an attempt to recoup the money it had spent on the facility, the town offered to do something almost no other town in America was willing to do — house prisoners from Guantanamo Bay.

That didn't happen, but it's a testament to how desperate Hardin is to fill the prison, get it up and running, and create jobs for the town.

Another Town, A Different Prison

About 1,500 miles south of Hardin in Karnes County, Texas, you find a very different story.

Last year, the county agreed to let a private prison company build a new 600-bed immigrant detention center there. It wasn't a tough vote because the company, GEO Group, already had one facility in Karnes County it built in 1998.

"They have been tremendous corporate partners with the county and the people here in Karnes County," former Karnes County Judge Alger Kendall says.

Each year, Kendall says, GEO Group gives the county $4,000 for school scholarships and $6,000 for maintenance and upkeep of the city's courthouse.

GEO Group also gives money to the local Rotary Club, Toys for Tots, the Little League, Relay for Life and other local organizations and events, he says. And the people who work at the facility also help feed the local economy.

"I mean, that employment translates into other money being spent in the county," he says.

When the detention center is complete, Karnes County is banking on 140 new jobs and $150,000 in tax revenue.

The Economics Of Private Prisons

David Shapiro says that promise of jobs and tax revenue is eerily similar to what some officials in Hardin said back in 2004.

Shapiro, a staff attorney for the American Civil Liberties Union National Prison Project, is the author of a new ACLU report that's critical of the private prison industry.

Shapiro says it's possible a town could reap some small economic benefits from a private prison, but it may not bring the larger economic boost the county is hoping for.

"That's what the empirical evidence has shown ... and there are various theories for why that may be the case," Shapiro tells weekends on All Things Considered guest host Laura Sullivan.

The presence of a prison might actually squeeze out other businesses that could bring greater benefits than the prison itself, he says. Also, many of the jobs created by a private prison don't actually go to people in the community.

The bigger problem, he says, is that state and federal taxpayers — who in the end are paying for these prisons — aren't getting the most value for their money.

To cite just one example, he says, last year the Arizona auditor general found that it actually might be more expensive to hold Arizona prisoners in private, for-profit facilities than in public ones.

Despite these findings, the state has plans to award contracts for 5,000 more private prison beds.

The safety and security of private prisons is another concern. Shapiro says some studies have found that the level of violence is actually higher in private prisons.

"Private prisons have incentives to make money [and] to cut costs," he says. "One of the ways they do that is by slashing pay for staff, which leads to much higher rates of turnover."

That high rate of turnover and guards who lack the experience to properly respond to situations like escape attempts is dangerous, Shapiro says.

The savings from those cost cuts do not get passed on to the state, he says.

Shapiro's report criticizes both GEO Group and the Corrections Corporation of America, the two biggest private prison corporations in the country.

GEO Group declined to comment, but the Corrections Corporation of America said in a statement from spokesman Steve Owen that the report "does not enter the realm of credible discussion."

In the statement, he called the report "an exceedingly thin, old mix of dated news, willful bias and unfounded opinion. It's being advanced by a familiar cast of industry critics and is blind to our industry's many benefits."

Despite the criticism private prisons face, as an industry they do very well. They make money, a little for some of the towns where they're built and a lot for shareholders and investors.

"This is an investment that we talk with investors about on a regular basis as a good idea," investment analyst Tobey Sommer tells Sullivan.

Sommer, director of equity research at SunTrust Robinson Humphrey in Tennessee, says both CCA and Geo Group made more than $1 billion each last year and their CEOs took home multimillion-dollar bonuses.

The recession could actually make them more money, Sommer says. With budgets stretched thin, states might look to private prisons to house and secure even more inmates. Only 10 percent of all inmates in the U.S. are housed in private prisons, he says, so that other 90 percent could be seen as an opportunity for growth.

But not everyone sees opportunities for long-term growth.

"Crime rates are declining, the prison population is declining, and many states, in large part motivated by the economic downturn, are realizing that they can't keep building their way out of the problem," says Michele Deitch, who teaches criminal justice at the Lyndon B. Johnson School of Public Affairs at the University of Texas.

Deitch says the new growth market for prison companies is immigrant detention, like the facility in Karnes County. New prisons, possibly for state inmates, like the one in Hardin, Mont., are on the decline.

The continuing flow of prisoners from the state isn't what it used to be, Deitch says, because of new treatment models and other alternatives to prison.

But Sommer says, while an empty prison just off Main Street could be a problem for Hardin or any other town, it's not a problem for the private prison industry, especially for companies hoping to fill those beds with immigration detainees.

"That enables kind of last-minute purchasing by their customers," he says, "so as a need arises, from a state or federal customer, Corrections Corporation can say 'I've got a facility with 1,000 beds available for you.'"

And right now, it has one ready. It just has to turn the lights on.