Accessibility links
Opera: The Early Adopter Of The Media World The Metropolitan Opera recently opened a show that uses cutting-edge 3-D projection technology. Historian Mark Schubin says that's just one of the opera world's many tech-savvy innovations, some of which helped give rise to modern radio and TV. 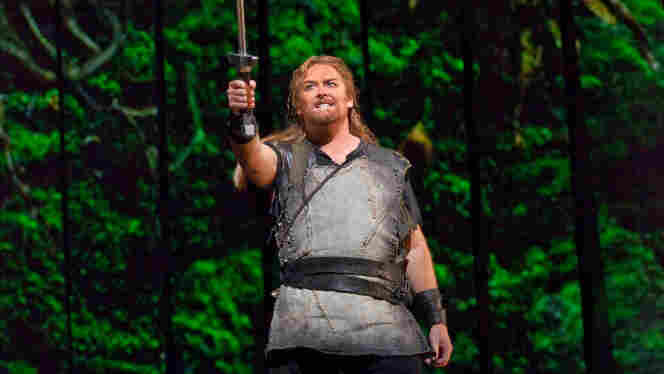 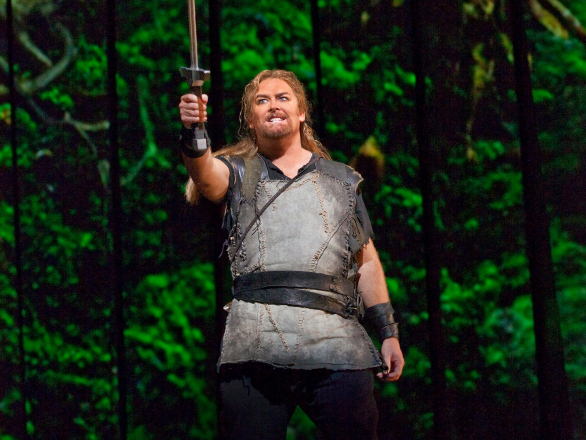 The Metropolitan Opera recently opened a new production of Siegfried, the third of the four operas in Wagner's Ring Cycle — in 3-D. You won't need special glasses to see the actors on stage. Instead, the background sets 3-D projections of forests and other illusions.

It turns out that having 3-D sets in a live show is just the latest tech-savvy leap for the genre. Historian Mark Schubin lectures about opera's place on the cutting edge of technology. He says opera theaters got the jump on the first telephone patent, Edison's light bulb, commercial radios and more.

"The first radio transmission of a complete opera was in 1910," Schubin tells Weekend Edition Sunday host Audie Cornish. "That was 10 years before what people consider the first radio station."

Even before that, Schubin says, people listened to opera at home via telephone lines, using headphones and, in some cases, stereo sound. The cooperation between opera and phone companies began in New York with a former opera impresario named Edward Fry.

"In his later life, [he] was stuck in bed, so he had telephone lines installed to the local opera house," Schubin says. "They came to his house, and he could hold up the telephone receiver and listen to the opera. And that was in 1880."

Schubin says it wasn't long before the service was commercialized. Other cities created their own models: In Paris, for example, you could use public coin-operated machines to listen to a few minutes of opera at a time, or use a home service that was pay-per-event. In Budapest, announcers began reading daily headlines over the phone lines before the start of the opera, giving rise to the first newscasts. Schubin argues that even movies and television have roots in opera.

"It doesn't matter who you want to pick as the inventor of movies," he says. "If you pick Thomas Edison, his first filing with the U.S. Patent Office said that the purpose of movies was for opera. If you prefer the inventor Louis Le Prince, he filed a patent for the adaptation of animated pictures to operatic scenes. If you prefer Charles Francis Jenkins, he said that one of the things you could do with television, in his description of the first television set in 1925, was the delivery of opera."

Opera's culture of innovation continues today, as the Metropolitan Opera takes to the 3-D frontier. Schubin says the projection system used for Siegfried incorporates some of the most advanced technology available.

"There are people that are working in rock concerts, who work in all sorts of other levels of computer graphics and projection," Schubin says, "who are calling the people at the Met every day and saying, 'What did you do today?' It's just so amazing how they're pushing the limits."