Accessibility links
Maine Voters Weigh Same-Day Registration Republicans in Maine recently decided to remove the option for voters to register on the day they cast their ballot, citing the stress on municipal clerks and concerns about the potential for voter fraud. Democrats responded by launching a people's veto campaign. Voters in the state are being asked to restore same-day registration. 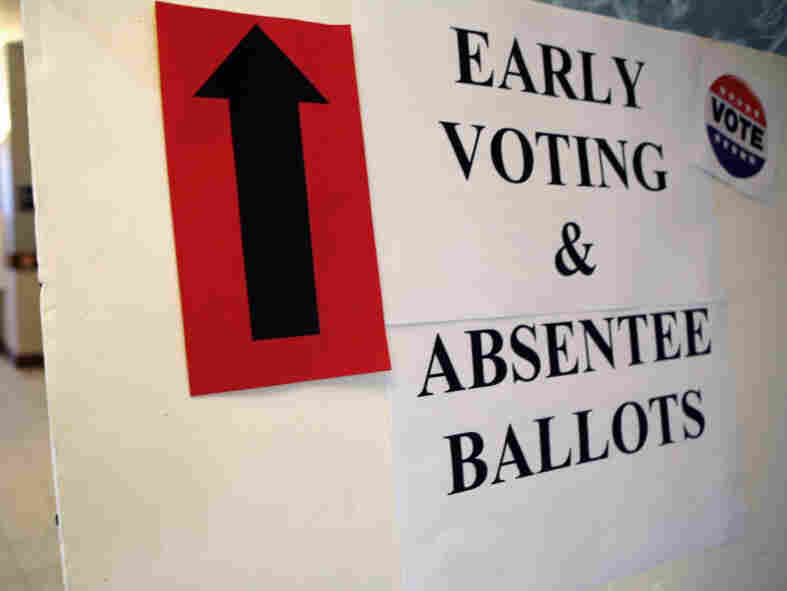 A sign directs voters to an area where they can cast their ballot in Scarborough, Maine, in 2009. Until recently, Maine voters could register to vote on Election Day but a new law has eliminated that option. Pat Wellenbach/AP hide caption 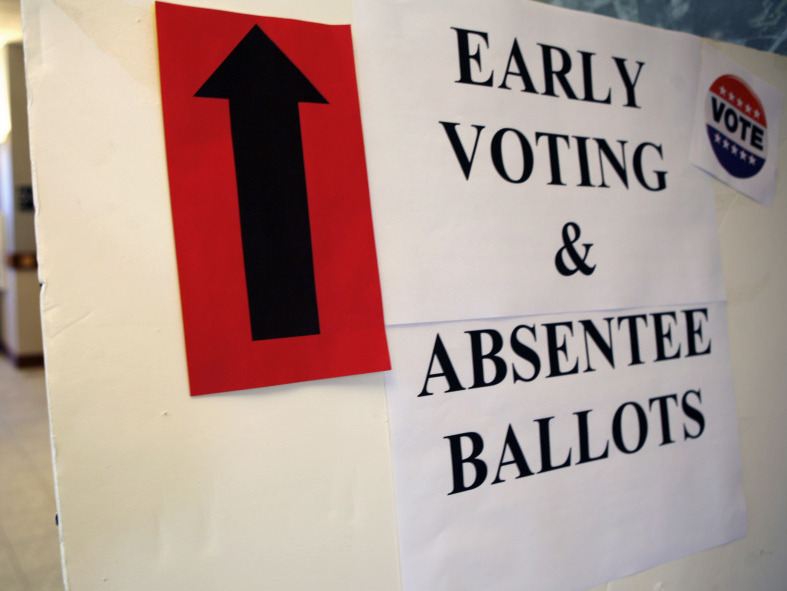 A sign directs voters to an area where they can cast their ballot in Scarborough, Maine, in 2009. Until recently, Maine voters could register to vote on Election Day but a new law has eliminated that option.

For nearly 40 years, voters in Maine have been able to walk into a polling place or town hall on Election Day and register to vote. But the Republican-controlled legislature this year decided to remove the option, citing the stress on municipal clerks and concerns about the potential for voter fraud.

Angry Democrats responded by launching a people's veto campaign, and come Election Day this Tuesday, voters will consider whether to restore same-day registration.

When Richard Vargas retired from the Marine Corps and returned home to coastal Maine 16 years ago, he was surprised to run into problems at the local polls, not once, but twice.

"I had registered to vote quite a few years prior to that, and I voted absentee when I was in the service, and when I went to vote, my name wasn't on the roster," Vargas says. "So the town clerk had me fill out a ballot and added me to the roster and everything was good to go, both times."

Thomaston town clerk Joan Linscott is an outspoken supporter of same-day voter registration, which she says ensures that people such as Vargas, who are the victims of innocent mistakes, retain their right to be heard.

"If you didn't know that you weren't on the list until Election Day, that basically means that takes your right to vote in that election away," Linscott says.

But when Republicans in the Maine legislature first set out to eliminate same-day voter registration in June, they cited the undue stress on municipal clerks as a key reason. The other reason for enacting a buffer period of two business days, say supporters, is to minimize the potential for voter fraud.

"Maine has the least secure voting system in the nation," says Lance Dutson of the conservative-leaning Maine Heritage Policy Center. He says Maine's elections run on the honor system, and require little proof of identification.

"If somebody comes in and is ineligible, whether from a malicious intent or just not knowing the rules, once their vote is cast, there is no way to pull it back," Dutson says. "And there's really no way to know that it happened. So in any election, if one person's vote is negated by someone who is ineligible, that's too much."

But supporters of same-day registration, including Shenna Bellows of the ACLU of Maine, say there's little tangible evidence of voter fraud, and the threat is far outweighed by the very real barriers the new law creates.

"In 38 years of same-day voter registration, there have only been two cases of voter fraud, and those individuals were prosecuted and convicted," Bellows says. "So when you look at the facts, you're talking not about one voter whose vote might be negated, you're talking about tens of thousands of Mainers who would be denied their right to vote on Election Day."

Some political observers say that what's really driving the issue is partisan politics, because same-day voter registration has historically been used by people who work multiple jobs, who move more frequently, or by college students, all considered groups that are more likely to vote in line with the Democratic Party.