Accessibility links
'SNL's' Darrell Hammond Reveals Cutting, Abuse In 14 years on Saturday Night Live, Darrell Hammond did many impressions, including Bill Clinton and Al Gore. But few of his cast members knew that Hammond struggled with drugs, alcohol and self-cutting as the result of systematic childhood abuse. 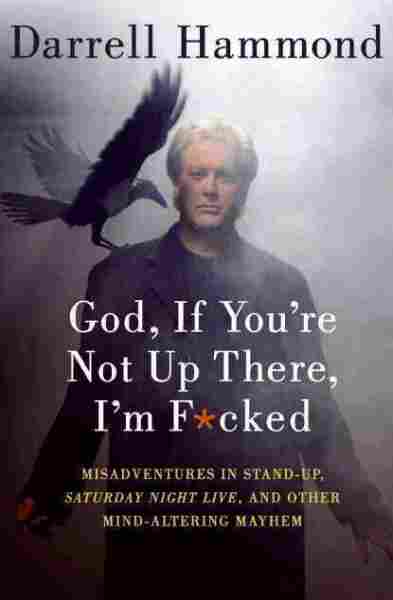 Tales Of Stand-up, Saturday Night Live, And Other Mind-altering Mayhem

Title
God, If You're Not Up There, I'm F- - - - -
Subtitle
Tales Of Stand-up, Saturday Night Live, And Other Mind-altering Mayhem
Author
Darrell Hammond

In 14 years on Saturday Night Live, Darrell Hammond did many impressions, including Bill Clinton, Al Gore and Sean Connery. Few of his cast members knew that Hammond struggled with drugs, alcohol and self-cutting as the result of childhood abuse.

In his memoir God, If You're Not Up There, I'm F-----: Tales of Stand-Up, 'Saturday Night Live' and Other Mind-Altering Mayhem, Hammond details the systematic brutality he suffered at the hands of his mother, who beat him, stabbed him and tortured him with a hammer and electrical outlet.

Hammond says he was medicated during much of his time at SNL and that he frequently cut himself backstage. Before one of his most famous sketches — the Bush-Gore "lockbox" debate with actor Will Ferrell — Hammond says he started having flashbacks and momentarily forgot what Gore sounded and looked like.

"I was disoriented and frightened, and I was feeling every single thing that happened to me when I was in the kitchen once with my mother," he says. "I'm not a doctor — so I can't describe flashbacks well — but it is like you're living it again."

Hammond says most of his co-workers weren't aware of his inner turmoil — or of the fact that backstage, before each sketch, he would often cut himself.

"Most of the time it was really manageable," he says. "But if you added a pint of [alcohol] to the equation, then sometimes it got a little messy."

Hammond repeatedly checked himself into a psychiatric hospital in New York City for treatment. He says he relied heavily on the producers of SNL, who were aware of his struggles, for support.

"They were extremely helpful to me," he says. "They made considered decisions over whether I was going to be able to put the ball over the fence — whether [being on SNL] was jeopardizing my health or actually helping me to have this giant project to pour my life into. That was a delicate balance for them, and not one that they should have had to go through."

During Hammond's time on SNL, he impersonated celebrities like Donald Trump, John Travolta and Geraldo, and politicians like Bill Clinton, Al Gore and Dick Cheney. But Hammond didn't want to impersonate Arizona Sen. John McCain out of fear of mocking his father, who suffered from lifelong trauma after serving in World War II.

Hammond's gift with impressions got him his initial audition and then his job on SNL, but it also helped him at home. As a child, Hammond says, he relied on his ability to imitate Popeye as one of the few ways he could connect with his mother.

"I don't want to say that it delighted her or charmed her or changed our relationship," he says. "I can tell you that on a given day, it changed her state. When she got that faraway look in her eyes, when her Southern accent fell, I knew what was happening then. ... The afternoon's over and everything's fine."

On why he wanted to write a memoir

"The agreement between perpetrator and victim in which the victim agrees to remain silent because he's in fear. I wanted to write about it."

Will Ferrell: The Comedian Reflects

"I thought, 'Was this guy into Kennedy or something?' I'm feeling Kennedy. It was an instinctual thing. It's not like what I do is an exact science. And I'm frequently wrong. But finally, I couldn't get a handle on it. I had an audio recording of JFK's inaugural address. I printed it out by hand. I rehearsed it with a Southern accent. And then I put in this little crackle in my voice that I'd do. And voila. I felt like I had him."

On his parents and his mental illness

"They were happy to accept, as I was happy to accept, a sanitized version of reality. If I can get a sanitized version of reality, I'll take it. I go to this doctor and this guy interviews me and he doesn't know what he's dealing with. How can he in one hour? So he says to my mother, 'He's a schizophrenic and he's a manic depressive.' And I saw her face. And she said, 'Oh.' Like she thought she was going to get busted. And instead she said, 'Really? Is that right? Yeah. Well, what can we do about that?' And the doctor says, 'We'll just give him these pills. And then we'll lock him up here for a while and that'll be just fine.' ... So years later, when I began trauma therapy, I called [my mother] on the phone and I said, 'I'm being treated for the symptoms that prisoners of war [get], Mom, but all I did was grow up in your house. Can you talk to me about that?' There was a pause and then a husky-throaty thing where she said, 'Don't ever call us again.' Click. And I didn't talk to them until their deathbed.' "

"I remember her reciting The Little Orphan Annie poem about Little Orphan Annie being butchered. I remembered that. I remember the floor being red and me bleeding in a vague sense – not a lot about it. I remember, I thought it was my fault. I remember my hand slammed in the door. Again, my fault. And also, electric socket, I - my fault. All my fault, isn't it? I mean, can you imagine the desperation of a child who chooses to believe that he did this to himself, just so he doesn't have to consider the idea that his mother did it, or his parents did it? Because you know, Terry, I'll tell you something. I hope this - I don't know anything about you, but I think it's completely barbaric to shake hands with and seek help from the person who caused your injury. That will make you sick."