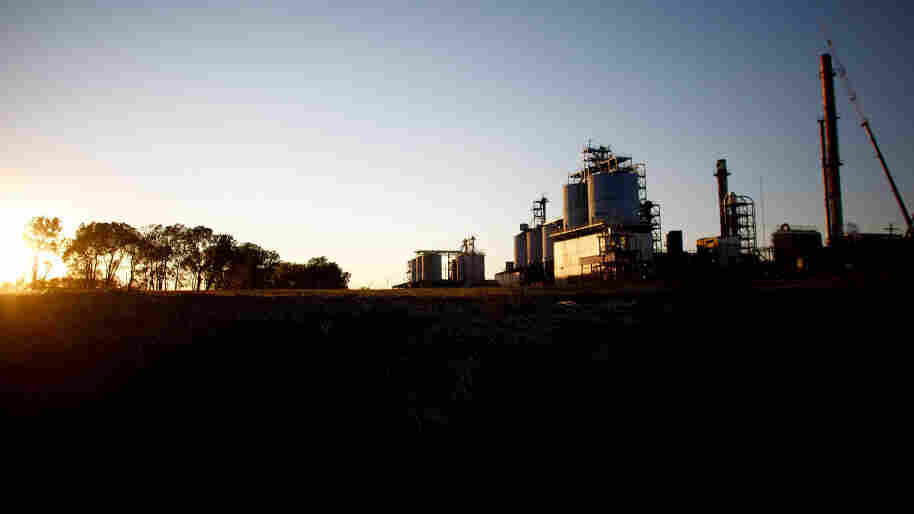 The Continental Carbon plant sits on the southern outskirts of Ponca City, Okla. Until August, the plant was on an internal EPA "watch list," for violating rules of the Clean Air Act. David Gilkey/NPR hide caption 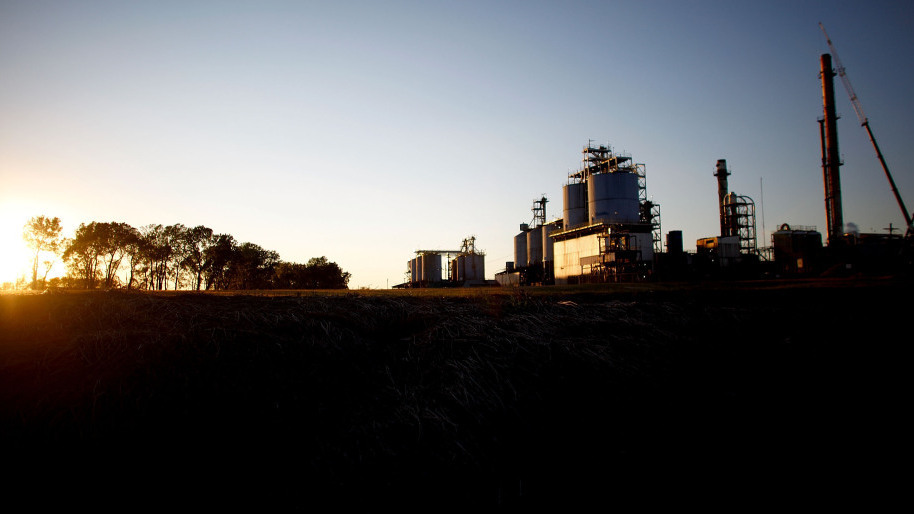 The Continental Carbon plant sits on the southern outskirts of Ponca City, Okla. Until August, the plant was on an internal EPA "watch list," for violating rules of the Clean Air Act.

The system Congress set up 21 years ago to clean up toxic air pollution still leaves many communities exposed to risky concentrations of benzene, formaldehyde, mercury and many other hazardous chemicals.

The series "Poisoned Places: Toxic Air, Neglected Communities" was reported by NPR's Elizabeth Shogren, Howard Berkes and Sandra Bartlett, together with Jim Morris, Chris Hamby, Ronnie Greene, Emma Schwartz and Kristen Lombardi from the Center for Public Integrity. Data analysis for this series was by Robert Benincasa of NPR and Elizabeth Lucas of CPI. Researchers Barbara Van Woerkom of NPR and Devorah Adler of CPI also contributed to this investigation.

FROM CPI: Many Americans Left Behind In The Quest For Cleaner Air

Pollution violations at more than 1,600 plants across the country were serious enough that the government believes they require urgent action, according to an analysis of EPA data by NPR and the Center for Public Integrity. Yet nearly 300 of those facilities have been considered "high priority violators" of the Clean Air Act by the Environmental Protection Agency for at least a decade.

About a quarter of those 1,600 violators are on an internal EPA "watch list," which the agency has kept secret until now.

EPA estimates facilities across the country emitted 40 percent fewer toxic emissions in 2005 than they did in 1990, but toxic air pollution has persisted in communities like Ponca City, Okla.; Hayden, Ariz.; Tonawanda, N.Y.; and Muscatine, Iowa.

"I don't think it's a great deal of comfort to tell somebody whose kids may develop brain damage or the adults in the neighborhood who may get cancer that overall we're reducing toxic air pollutants. It doesn't help them," says Rep. Henry Waxman, D-Calif., an author of the 1990 update to the Clean Air Act. "What will help them is that the industries that are in their area actually control the pollution and stop poisoning the people."

Cleanups, however, have been delayed by tension between the EPA and state environment programs, budget cuts and a system that allows companies to estimate their own toxic emissions.

Tackling toxic air pollution is a top priority of the Obama administration's EPA. The agency is pursuing rules to require reductions in hazardous air emissions from industries that have not faced such regulations before, including coal-fired power plants.

But EPA officials concede it's a work in progress.

"It certainly is true that there are places in the country that are overburdened with toxic pollution," says Cynthia Giles, the EPA assistant administrator in charge of enforcement.

The Bush administration's EPA faced criticism for not being tough enough on chronic polluters, so in 2004 it created a confidential watch list to manage the problem.

According to EPA reports, when regulators don't crack down within nine months of learning that a facility is a chronic or serious violator of the rules, the facility automatically pops onto the watch list.

This spreadsheet contains the names and locations of 464 facilities that were on the U.S. Environmental Protection Agency's internal Clean Air Act "watch list" based on the July and September reports. The list includes serious or chronic violators of the act that have faced no formal enforcement action for many months. Until now, the list has not been made public.

Polluters on the list may have violated any of a number of rules. They might, for example, have failed to adhere to a state or federal order, or to obtain a permit. Emissions of hazardous pollutants may have been too high. All of the criteria can be viewed here.

Not every facility on the list may be a serious or chronic offender. Facilities may appear for other reasons, EPA spokesman Larry Jackson said. For instance, enforcement officials may be tracking a polluter's compliance with a court order. A company in negotiations with authorities might be on the list. In other instances, violations may have been alleged but not proven. There also may be data errors — for example, a state agency's failure to report an enforcement action to the EPA.

* Download the full spreadsheet as an .xls (Excel) file.

As a result, the agency says, some facilities may end up on the list in error.

Some of the facilities on the list likely are the "worst of the worst" polluters, but others may be breaking the rules in ways that do not pose significant risks for human health or the environment, says Grant Nakayama, who headed the EPA's enforcements under President Bush.

Nakayama says one reason the agency made the list secret was to avoid tipping off offenders that were being criminally investigated.

"There are also violators out there that are really interested in gaming the system, beating the system, and anything that gives them forewarning I think would not be helpful," Nakayama says.

The agency released its most recent watch lists to NPR and the Center for Public Integrity in response to a Freedom of Information Act request. Giles said the EPA plans to start sharing the watch list with the public later this year. It's not clear why officials decided to change their policy and release the watch list.

The September list includes 383 power plants, refineries, chemical plants and other industrial facilities. Half of those plants are in six states: Ohio, Texas, Illinois, Louisiana, Wisconsin and Indiana. Forty-seven of those facilities had been added to the watch list since July 2011.

Toxic Air In Your Town

To begin exploring how air pollution may affect your community, use this interactive map of more than 17,000 facilities that have emitted hazardous chemicals into the air. Color-coded dots and scores of 1 to 5 smokestacks are based on an EPA method of assessing potential health risk in airborne toxins from a given facility. (View full searchable map > )

A Lack Of Modern Equipment And Rules

The 41-year-old plant lacks modern pollution scrubbers required for newer plants, according to GenOn. Avon Lake released more than 2 million pounds of lead, mercury, arsenic and other toxic chemicals into the air in 2010, according to GenOn's own reporting to EPA's Toxics Release Inventory.

Two decades ago, Democrats and Republicans together sought to protect Americans from nearly 200 dangerous chemicals in the air they breathe. That goal remains unfulfilled. Today, hundreds of communities are still exposed to the pollutants, which can cause cancer, birth defects and other serious health issues. A secret government "watch list" underscores how much government knows about the threat — and how little it has done to address it. Key findings of our investigation include:

* About 1,600 polluters around the country are classified by the U.S. EPA as "high priority violators" of the Clean Air Act — sites in need of urgent action by enforcers.

* Regulators take months and sometimes years to enforce anti-pollution rules. About 400 facilities are on an internal EPA "watch list" that includes serious or chronic Clean Air Act violators that have not been subject to timely enforcement.

* Regulators largely rely on an honor system easily manipulated by polluters, which report their own emissions.

The Ohio EPA says the plant is complying with its air pollution rules. But in June, the EPA launched an enforcement action against Avon Lake. The federal agency accuses the plant of violating its permit by not installing modern pollution controls when it was updated.

A company spokesman said GenOn disagrees but refused to provide an interview to NPR.

Since 1990, the EPA has set rules for cleaning up toxic emissions from many industries, but not power plants.

She says the agency's rules for power plants, due out later this year, will prevent thousands of premature deaths every year.

Environmentalists say the Avon Lake plant is an example of how budget shortfalls and politics keep states from enforcing pollution laws.

"It's a classic example that we see across the country where the states have not stepped in and said, 'Wait a minute — this power plant either needs to shut down or clean up,' " says Bruce Nilles, a lawyer who heads the Sierra Club's strategy to close old coal-fired power plants and prevent new ones from being built.

Tensions between the EPA and the states also often get in the way of timely enforcement, says Richard Alonso, a corporate lawyer who used to lead EPA's air pollution enforcement against facilities.

Alonso says that was a big reason that the agency needed the watch list. For example, Alonso remembers that while he was at the agency, an EPA regional office started investigating an industry in a particular state.

"Within a week, the state commissioner was up at EPA headquarters saying, What are you doing in my state? Get out of here. These are my sources. I'm dealing with them,' " Alonso recalls.

Alonso says it's not surprising that some states balk when the federal government wants them to force companies to spend millions of dollars on pollution controls. States rely on companies to provide jobs and tax revenue.

"The will to take on certain industries may not be there," he says.

A System Of Self-Reporting

Another reason many communities still face too much toxic pollution in their air is that companies self-report their own pollution, and many are allowed to estimate the quantity of toxic chemicals.

In a lot of cases, annual estimates are based on only one hour of monitoring the exhausts from a plant. For other facilities, no actual measuring is required.

Schaeffer says it would be like the police deciding to enforce speed limits by giving annual tests. The result is that some companies actually emit tens of times more toxic chemicals than they had been reporting.

"I make an appointment to drive past the radar gun, that's my speeding test. How ridiculous is that?" Schaeffer says.

The EPA agrees that traditional monitoring methods have failed and is working to require more real-time monitoring of toxic emissions.

Read more of this report on the Center for Public Integrity's website.

Jim Morris of the Center for Public Integrity contributed to this report.