The Nation: The Audacity of Occupy Wall Street

The Nation: The Audacity of Occupy Wall Street 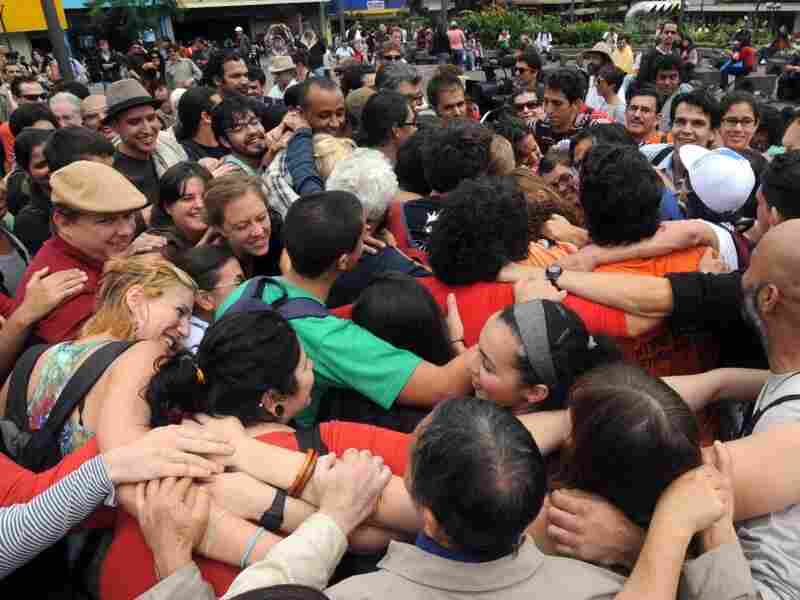 Hundreds of protesters embrace at the Culture square in San Jose, Costa Rica, on Oct. 15, 2011, during a worldwide demonstration against corporate greed and government cutbacks inspired by US 'Occupy Wall Street.' Ezequiel Becerra/AFP/Getty Images hide caption 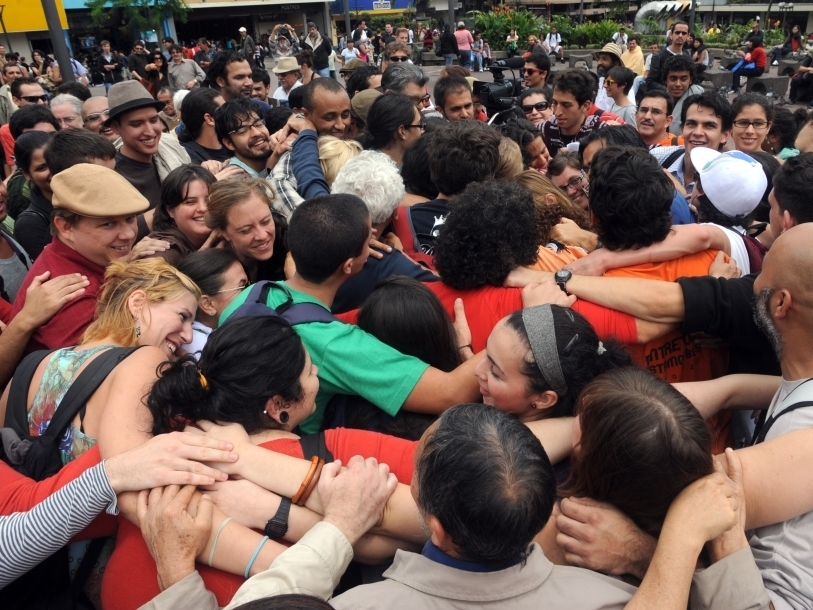 Hundreds of protesters embrace at the Culture square in San Jose, Costa Rica, on Oct. 15, 2011, during a worldwide demonstration against corporate greed and government cutbacks inspired by US 'Occupy Wall Street.'

Richard Kim is the executive editor of TheNation.com

A few years ago, Joe Therrien, a graduate of the NYC Teaching Fellows program, was working as a full-time drama teacher at a public elementary school in New York City. Frustrated by huge class sizes, sparse resources and a disorganized bureaucracy, he set off to the University of Connecticut to get an MFA in his passion—puppetry. Three years and $35,000 in student loans later, he emerged with degree in hand, and because puppeteers aren't exactly in high demand, he went looking for work at his old school. The intervening years had been brutal to the city's school budgets—down about 14 percent on average since 2007. A virtual hiring freeze has been in place since 2009 in most subject areas, arts included, and spending on art supplies in elementary schools crashed by 73 percent between 2006 and 2009. So even though Joe's old principal was excited to have him back, she just couldn't afford to hire a new full-time teacher. Instead, he's working at his old school as a full-time "substitute"; he writes his own curriculum, holds regular classes and does everything a normal teacher does. "But sub pay is about 50 percent of a full-time salaried position," he says, "so I'm working for half as much as I did four years ago, before grad school, and I don't have health insurance.... It's the best-paying job I could find."

Like a lot of the young protesters who have flocked to Occupy Wall Street, Joe had thought that hard work and education would bring, if not class mobility, at least a measure of security (indeed, a master's degree can boost a New York City teacher's salary by $10,000 or more). But the past decade of stagnant wages for the 99 percent and million-dollar bonuses for the 1 percent has awakened the kids of the middle class to a national nightmare: the dream that coaxed their parents to meet the demands of work, school, mortgage payments and tuition bills is shattered. Down is the new up.

But then in these grim times, something unexpected happened: at first scores met in parks around New York City this summer to plan an occupation of Wall Street, then hundreds responded to their call, then thousands from persuasions familiar and astonishing, and now more than 100 cities around the country are Occupied. In the face of unchecked capitalism and a broken, captured state, the citizens of Occupy America have done something desperate and audacious—they put their faith and hope in the last seemingly credible force left in the world: each other.

Sometime during the second week of the Occupation, Joe took that leap. Within his first hour at Liberty Park, he was "totally won over by the Occupation's spirit of cooperation and selflessness." He has been going back just about every day since. It took him a few days to find the Arts and Culture working group, which has its roots in the first planning meetings and has already produced a museum's worth of posters (from the crudely handmade to slicker culture-jamming twists on corporate designs), poetry readings, performance-art happenings, political yoga classes and Situationist spectacles like the one in which an artist dressed in a suit and noose tie rolled up to the New York Stock Exchange in a giant clear plastic bubble to mock the speculative economy's inevitable pop.

Alexandre Carvalho, a Brazilian doctor who worked in Rio's favelas and was one of the original organizers of Arts and Culture, explains that the group's praxis revolves around two principles. "First—autonomy, horizontalism and collectivism. We're nonhierarchical, self-regulating, self-deliberating and self-organizing. Everyone is creating their own stuff, but we're connected to a larger hub through the Arts and Culture group." The second principle is something Alexandre calls "virgeo," a mashup of "virtual" and "geographical." "We try to have both an on-the-ground conversation and an online conversation so that people all over the world can send their ideas and respond to our work." The same concepts apply, more or less, to the other culture working groups at OWS—from Media (which shoots video for OWS's livestream, documents direct actions and produces educational videos) to the Library (which has received more than 3,500 books, all logged in an online card catalog, from the nearly complete works of Noam Chomsky to Creative Cash: How to Sell Your Crafts, Needlework, Designs and Know-How).

At one of Arts and Culture's meetings—held adjacent to 60 Wall Street, at a quieter public-private indoor park that's also the atrium of Deutsche Bank—it dawned on Joe: "I have to build as many giant puppets as I can to help this thing out—people love puppets!" And so Occupy Wall Street's Puppet Guild, one of about a dozen guilds under the Arts and Culture working group, was born. In the spirit of OWS, Joe works in loose and rolling collaboration with others who share his passion for puppetry or whose projects somehow momentarily coincide with his mission. With the help of a handful of people, he built the twelve-foot Statue of Liberty puppet that had young and old alike flocking to him on October 8 in Washington Square Park. Right now, he's working with nearly thirty artists to stage Occupy Halloween, when his newest creations, a twelve-foot Wall Street bull and a forty-foot Occupied Brooklyn Bridge inspired by Chinese paper dragons—along with a troupe of dancers playing corporate vampires—will inject a little bit of countercultural messaging into the annual parade of Snookis and True Blood wannabes strutting down Sixth Avenue.

Those of harder head or heart may tweet—giant puppets, #srsly? Yes, it's hard to draw a straight line from something like Occupy Halloween to the overthrow of global capitalism or a financial transactions tax or student debt relief or any number of goals—some of world-historical magnitude, some straight from the playbook of reformist think tanks—that swirl around Liberty these days. But it's creative types, either shoved into crisis by the precarious economy or just sick of making things under the corporate system, who have responded most enthusiastically to Occupy Wall Street's call. It's not where one might have looked for a revolt to emerge organically. In subsequent Occupations like the one in Oakland, anti-racist organizers have been a dominant force; and in Rust Belt towns across the Midwest, blue-collar types have led the way. But the first spark, here in New York, was generated when artists, students and academics hooked up with activists from Bloombergville, a three-week occupation near City Hall to protest the mayor's budget cuts. This unlikely mix has proved to be a tactical boon, says Alexandre: "Artists are in a privileged position to take the terrain without too much repression. It's harder for the police to move against you when you are clearly doing something nonviolent and artistic."

When I ask Joe if he thinks Occupy Wall Street should make repealing budget cuts like the ones that struck New York's public schools a priority, he replies that the thought hadn't really crossed his mind. "I hope there are groups of people who are working on that specific issue," he says, but for the moment he's "prioritizing what I'm most passionate about." Which, he explains, is "figuring out how to make theater that's going to help open people up to this new cultural consciousness. It's what I'm driven to do right now, so I'm following that impulse to see where it leads."