Accessibility links
Win Or Lose, DuPree Makes History In Mississippi Johnny DuPree is the first African-American candidate to win a major party's nomination for governor in Mississippi since Reconstruction. Though he remains a long shot against GOP Lt. Gov. Phil Bryant, DuPree says his run shows that the state has made progress. 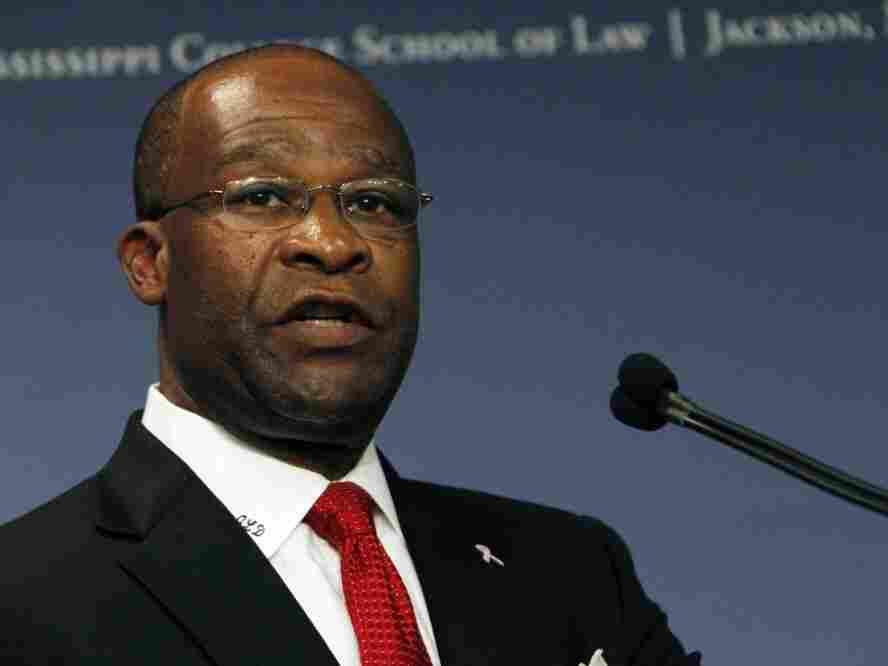 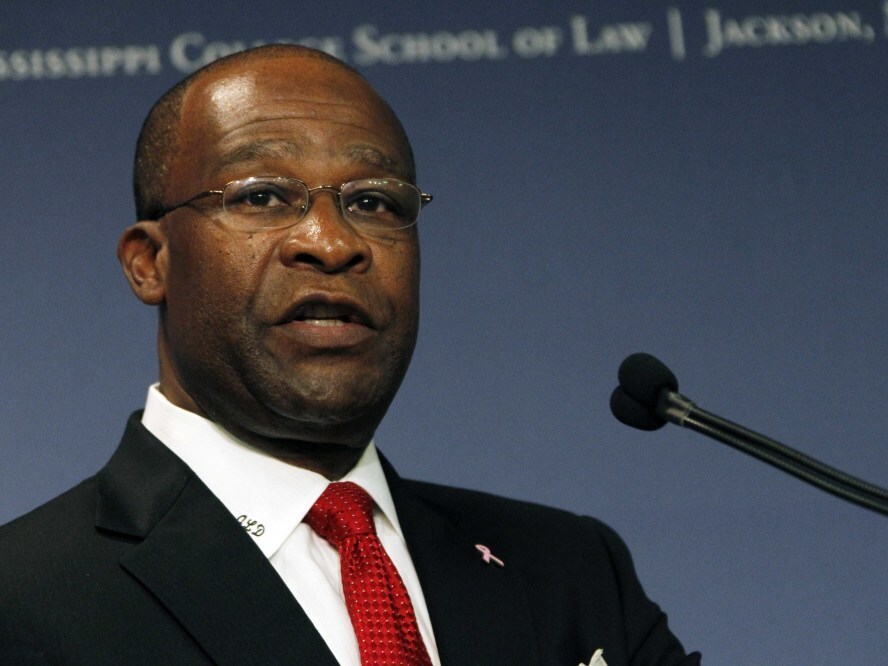 Democratic candidate Johnny DuPree answers questions during a gubernatorial debate at the Mississippi College School of Law auditorium in Jackson, Miss., on Oct. 14.

The mayor of Hattiesburg, Miss., Democrat Johnny DuPree, is the first black candidate to win a major party's nomination for governor in the state since Reconstruction. He's a long shot in the election against a well-funded lieutenant governor, Republican Phil Bryant. DuPree is not focusing on race, saying he'd rather talk about issues and his leadership skills.

He is running a low-key campaign across the state, trying to increase his name recognition. There are no mudslinging and political attack ads. At the Hinds County Democratic Party's annual Beans and Greens dinner in Jackson, DuPree reached out to the party faithful.

"The focus of my campaign is to try and move Mississippi in another direction," DuPree said. "Mississippi [for] far too long has been a state that's been categorized by the negative."

DuPree served on the school board, was a county commissioner and has his own real estate company. He has been mayor of Hattiesburg — a college town and the state's third-largest city — for 10 years. He says he turned the city around, attracting 1,000 new jobs last year alone. DuPree says jobs, health care and education are the key issues in this election.

In this TV ad, Democratic candidate for governor Johnny DuPree talks about his mother's rules and how they will help him as governor.

"Sixty, 70 percent of the people who are incarcerated don't have a high school diploma," DuPree says. "You know, our young people who enter college the first year, 40 to 50 percent of them don't graduate. That's not a formula for success, not only for the individual or the family but for the state itself."

DuPree has downplayed the issue of race and ran an ad during the primary showing his sense of humor. In the ad, DuPree says, "I'm here to talk to you about color: green." He shows off a one-dollar bill and explains how "better jobs mean more money for Mississippians and we do that with better schools and safer streets."

When DuPree won his first election as mayor of Hattiesburg in 2001, the voting age population was 57 percent white, so he says he has proved he can attract both black and white voters. While no African-American has been elected to a statewide office since Reconstruction, DuPree says Mississippi has been making progress when it comes to race — it's the state with the most black elected officials in the country.

"Since this is the governor's race it kind of highlights the fact that maybe we have made more progress than people give us credit for," DuPree says. "I don't highlight that because I think again, the people I talk to both white, black, rich, poor, Republican, Democrats, Tea Party, Green party, all of 'em. What they want to talk about is education and they want to talk about jobs."

Rep. Debbie Wasserman Schultz, chairwoman of the Democratic National Committee, held a rally in the state late last month at which a fiery DuPree said he is ready to fight like a player who has been sitting on the bench for too long.

"Now put me in. Let me play," DuPree said to applause at the event. "Let me play ball, sir." 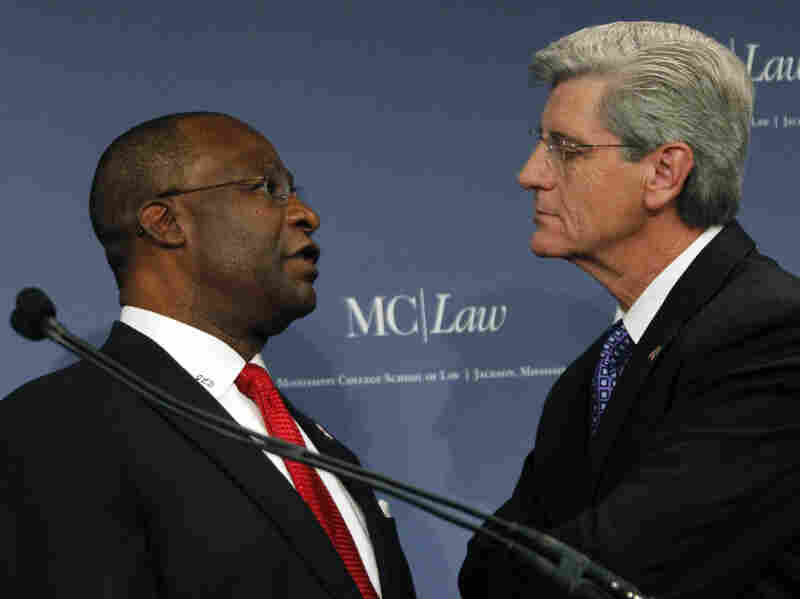 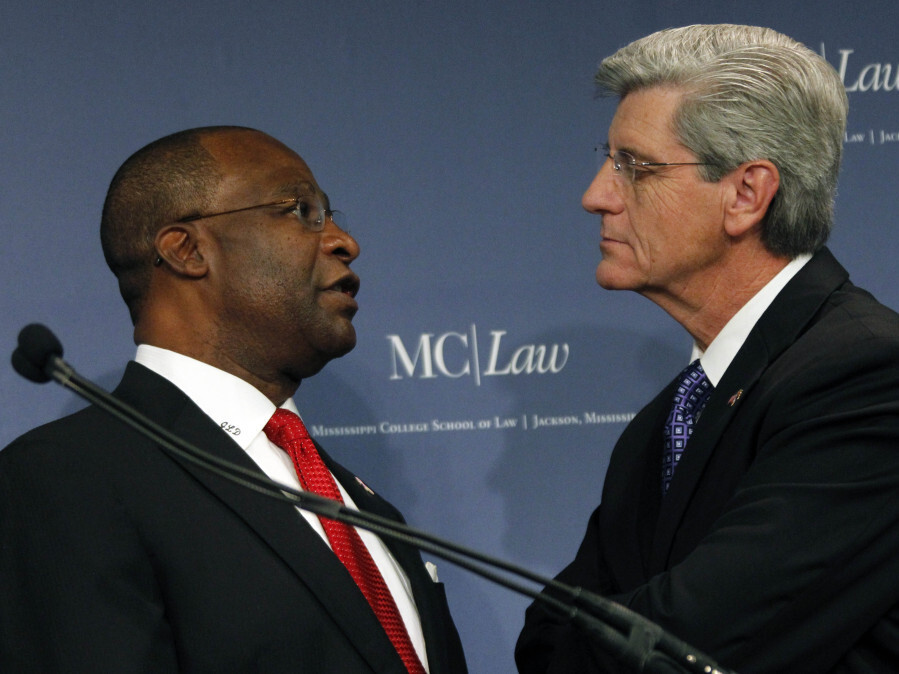 Republican Phil Bryant (right) and Democrat Johnny DuPree confer prior to their gubernatorial debate at the Mississippi College School of Law auditorium in Jackson, Miss., on Oct. 14.

DuPree's opponent, Bryant, is getting help from some big guns including New Jersey Gov. Chris Christie and current Mississippi Gov. Haley Barbour, who couldn't run for a third term. Bryant, who was unavailable for an interview, has raised more than $4 million while DuPree says he has about $1 million. Still, that doesn't seem to bother the candidate.

"I'm always the underdog," DuPree says. "Now look, I think we've made a difference win, lose or draw in the way we campaign. I think we brought civility to campaigning. I think we've proven you don't have to have a gazillion dollars in order to run."

And the congressman from the state's 2nd Congressional District, Bennie Thompson, says DuPree's campaign is significant.

"For a state like Mississippi, given the history that we have, it is just that — historic. But also he's played by the rules," Thompson says. "He's put himself before the public. Those Democrats chose him as a nominee and from that, I think it's important that we allow him the opportunity to be elected governor. So I'm optimistic."

Political analysts say DuPree has run a credible race, though a victory is still a real long shot. In this election climate and with the ailing economy, any Democrat would have a tough time winning, but some suggest just the fact that DuPree is running for office may help change the state's image.