Accessibility links
Can Passports List 'Jerusalem, Israel' As Birthplace? The United States Supreme Court Monday heard arguments in a case that combines the Middle East conflict with the dueling foreign policy roles of Congress and the president. Specifically, the question was whether Congress can force the executive branch to list Israel as the birthplace for United States citizens born in Jerusalem. 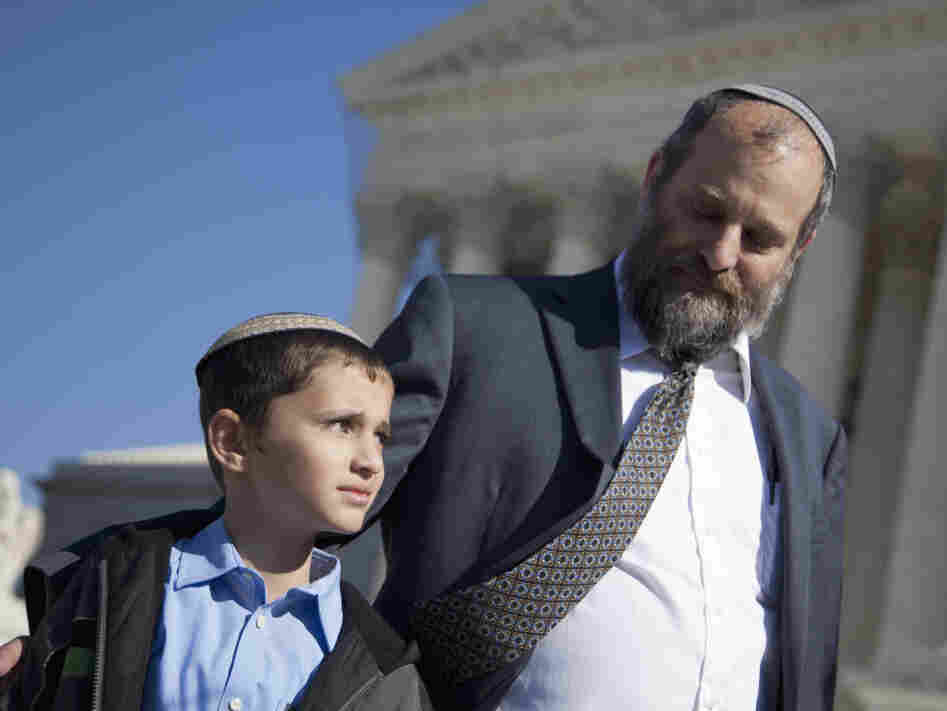 Ari Zivotofsky stands with his 9-year-old son, Menachem, outside the Supreme Court on Monday. Menachem was born in Jerusalem, and he and his parents want his U.S. passport to list his place of birth as Israel. Evan Vucci/AP hide caption 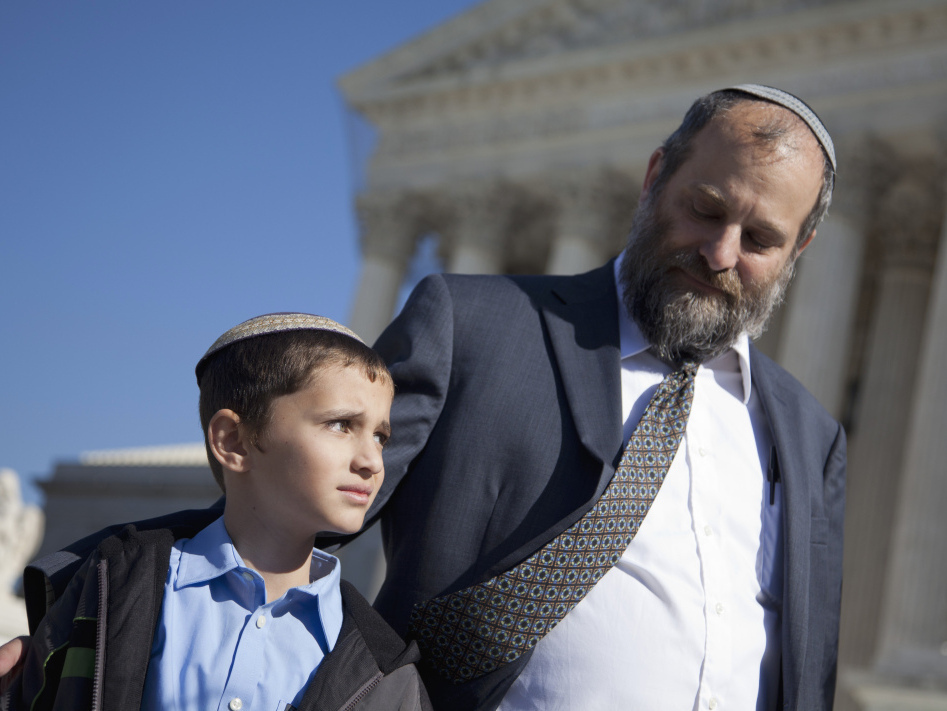 Ari Zivotofsky stands with his 9-year-old son, Menachem, outside the Supreme Court on Monday. Menachem was born in Jerusalem, and he and his parents want his U.S. passport to list his place of birth as Israel.

The United States Supreme Court heard arguments on Monday in a case that combines the Middle East conflict with the dueling foreign policy roles of Congress and the president. Specifically, the question was whether Congress can force the executive branch to list Israel as the birthplace for United States citizens born in Jerusalem.

Ever since the creation of Israel, every president has declined to recognize Jerusalem as part of any country. With both Arabs and Israelis claiming sovereignty over the city, the United States has taken the position that the status of Jerusalem is to be negotiated in a Middle East peace deal.

Israel's supporters in Congress, however, have tried to force a different policy, passing legislation seeking to move the U.S. Embassy from Tel Aviv to Jerusalem and requiring the State Department to allow United States citizens born in Jerusalem to list Israel as their place of birth on their passports. Both the Bush and Obama administrations have refused to do that, contending that the passport law unconstitutionally infringes on the president's foreign policy powers.

Enter Menachem Zivitofsky, born in Jerusalem nine years ago, the child of American parents who emigrated to Israel. When the State Department listed the child's birthplace as Jerusalem, the boy and his parents sued for enforcement of the federal law that allows them to list the place of birth as Israel.

On the steps of the Supreme Court Monday, Ari Zivitofsky, the father, standing with his son at his side, explained why the passport designation mattered to his family. "Historically and religiously, the modern state of Israel is very significant as far as we're concerned; even though America is a wonderful country, we moved to Israel. We were very proud that our third child was born there, and we want his documents to say that."

Inside the Supreme Court chamber, the Zivitofskys' lawyer, Nathan Lewin, told the justices that under our constitutional system, foreign policy is a shared power, with Congress having the final say.

If it's a shared power, asked Justice Ruth Bader Ginsburg, "why does Congress trump the executive?"

Lewin replied that if, in a particular case, Congress overrules the president by statute, that "does not hobble the president in terms of future foreign policy."

What happens if there is a peace accord and Israel gives up the claim to Jerusalem, asked Justice Sonia Sotomayor. Is the president free to stop listing Israel on the passport? No, replied Lewin; the president would have to wait for Congress to change the law.

Sotomayor shot back:"So you are hobbling the president."

Justice Anthony Kennedy, his voice tinged with incredulity, asked if, under Lewin's theory, there were any foreign relations determinations that can be made by the president alone. "Diplomatic communications," responded Lewin. "In other words," said Justice Kennedy sarcastically, the president gets to decide "who gets the telegram."

Justice Samuel Alito also seemed skeptical, noting that the title of the statute at issue in this case refers to Jerusalem as the capital of Israel.

Justice Ginsburg noted that Congress has stopped just short of ordering formal recognition of Jerusalem as the capital. So, she asked, could Congress do that, overriding the policy of the executive branch? Yes, replied Lewin, "Congress has that authority."

With more questions like that, attorney Lewin seemed to narrow his argument, contending that the statute here is nothing more than a passport law.

"I'm sorry," interjected Justice Elena Kagan, but "it's a passport statute that seems to have nothing to do with the usual immigration functions." Instead, it has everything to do with Congress' declaration of foreign policy "as to recognition of Jerusalem as the capital of Israel." Congress, noted Kagan, did not allow Palestinians born in Jerusalem to list Palestine as their place of birth.

Yes, it did, asserted Lewin. Palestinians born in Jerusalem prior to 1948 "can say Palestine" as their birthplace.

"Well," replied Kagan, "you have to be very old to say Palestine."

Chief Justice John Roberts pressed the question, asking if it would make any difference if Congress had required some other sort of statement on passports — for example, if the word "Israel" were followed by "(disputed.)"

Verrilli, however, stuck to his guns, saying that would not change the fact that Congress was infringing on the president's authority.

Several justices seemed skeptical of the position taken by the lower courts and maintained by the administration, that this is a political dispute between two branches of government that the courts should stay out of.

"Why not go all the way? I mean, if the court decides that the Constitution commits this authority exclusively to the president, then it's over," said Justice Ginsburg.

To call this a political question, said Justice Ginsburg, is a "subterfuge."

Justice Sotomayor put the question this way: "if we call this a political question and don't address the merits, the outcome is that the president is saying he's entitled to ignore Congress." It would be "a little unsettling," she added, if a court charged with enforcing the laws passed by Congress refused to say whether a law is constitutional or unconstitutional.