Accessibility links
Wal-Mart Heiress Brings An Art Museum To The Ozarks This week, Wal-Mart heiress Alice Walton is opening the Crystal Bridges Museum of American Art in her hometown of Bentonville, Ark. But some are having trouble separating the retail giant, which is also headquartered in Bentonville, from the cultural attraction. 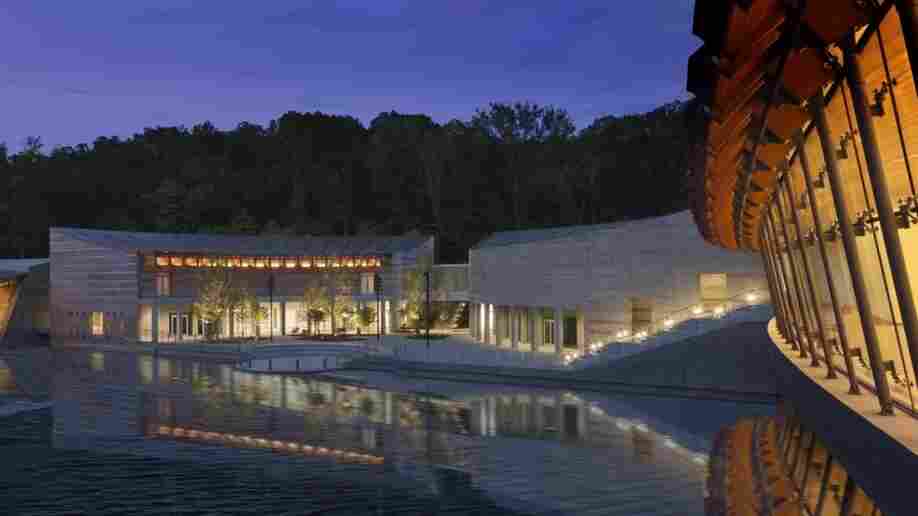 Of Art And Nature: A model shows one of the three ponds that will surround Crystal Bridges. The museum got its name from the two galleries that will actually serve as bridges over the ponds. Architect Moshe Safdie says his design is meant to help blend the experience of the museum's art with that of its natural surroundings. Aker Imaging hide caption

The American art world's biggest event in decades is happening this week — but it's not where you'd expect it to be.

Bentonville, Ark., is home to Wal-Mart headquarters and, starting Nov. 11, it will also be home to the Crystal Bridges Museum of American Art and what some critics are calling one of the world's best collections of American art.

Crystal Bridges is the brainchild of Wal-Mart heiress Alice Walton. While it's not as vast as New York's Metropolitan Museum of Art or the National Gallery in Washington, D.C., the museum is set to showcase an impressive collection of American art, including well-known pieces by Alexander Calder and Devorah Sperber.

Bringing The Art World To Bentonville

Crystal Bridges is often referred to as "the Wal-Mart museum," but the corporation has little to do with the art. If you go looking for an actual Wal-Mart museum in Bentonville, the closest you'll get is the Wal-Mart Visitor Center's Wal-Mart gallery. 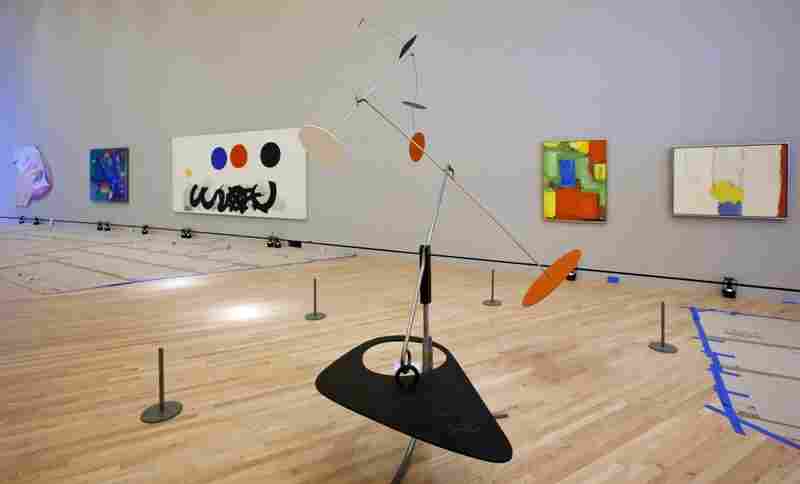 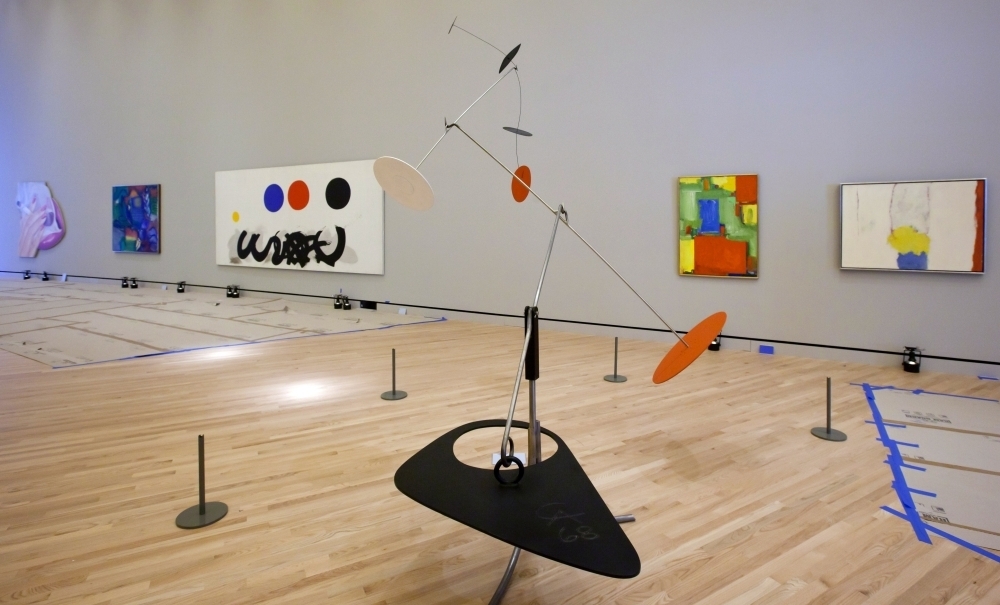 The company's headquarters employs more than 11,000 in Bentonville, but it isn't exactly a thriving metropolis. It has a small town square, and the rest is pretty much strip malls.

Monica Divis and her mother, Rita Divis, sit outside a restaurant on the square. Monica, who has worked for Wal-Mart for 22 years, says people from all over the world visit Bentonville — and even move to the city — to do business with Wal-Mart.

"If you sit out here long enough, you're going to hear several languages spoken," she says. "We were just in the visitor's center, and there was a lady from China buying things to take back because we have a Wal-Mart in China. There's Wal-Mart in Japan. So it is becoming an international destination."

Still, according to Rita Divis, art is something Bentonville could use more of.

"In this part of the world," she says, "we need that desperately."

Walton has said she wants Crystal Bridges to tell the story of America through art, so visiting the museum is like taking a tour not just of great art but of American history and culture. There are portraits of George Washington and 19th-century works by Thomas Eakins and John Singer Sargent. There's an eye-popping abstract piece from African-American artist Romare Bearden, and an Andy Warhol homage to country music star Dolly Parton.

According to museum director Don Bacigalupi, Crystal Bridges will also have interactive classrooms, one of which will be used to help kids bring out their inner artist.

"It's a kind of drop-in place for children and families to try their hand at things," Bacigalupi says. "So if they get excited by watercolor, they can go and take a watercolor class next-door." 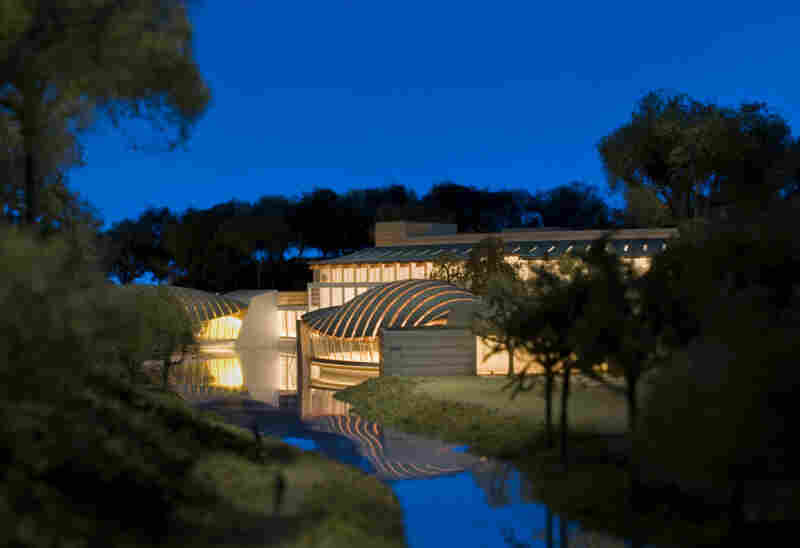 A model shows a view of the Crystal Bridges pavilion some museum staff refer to as "the armadillo" because of how its curved, copper bands resemble the animal's shell. John Horner/Crystal Bridges Museum of Art hide caption 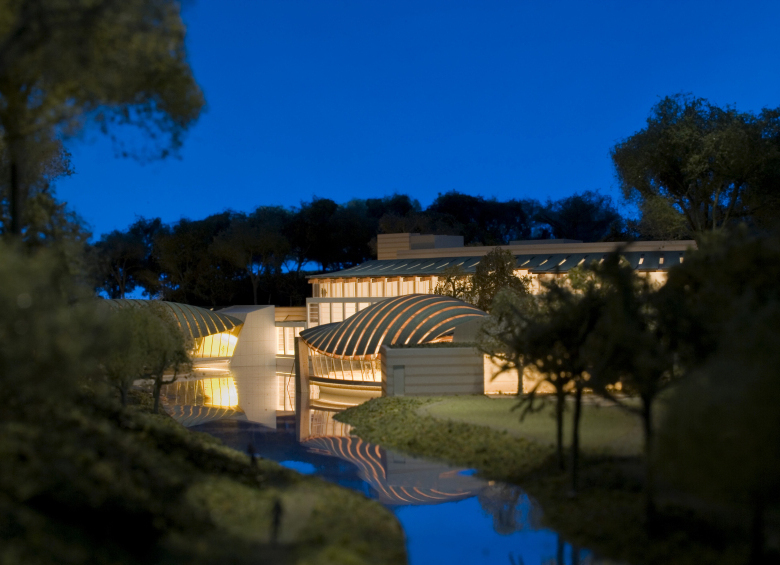 A model shows a view of the Crystal Bridges pavilion some museum staff refer to as "the armadillo" because of how its curved, copper bands resemble the animal's shell.

From the outside, the museum building itself is a work of art. With its curved, copper roof, it looks like an enormous creature nestled in the woods of Bentonville.

Moshe Safdie — the architect responsible for Los Angeles' Skirball Cultural Center and the Kaufman Center for the Performing Arts in Kansas City, Mo. — designed Crystal Bridges. He says his goal is to create a dynamic environment for visitors to explore the heritage of America.

"It's a rugged landscape," Safdie says. "We're harnessing nature, and the idea is to experience art with nature together."

Located in Arkansas' Ozark Mountain region, the museum grounds have 3 1/2 miles of walking and biking trails. The hope is that the presence of nature will lure people who might not otherwise be interested in art.

Separating The Museum From The Company

But not everyone who works at Wal-Mart is excited about the project.

Jerome Allen works at a Wal-Mart in Fort Worth, Texas. The day before the museum's media preview, he and about 150 other Wal-Mart employees from around the country came to Bentonville hoping to schedule a meeting with Wal-Mart CEO Mike Duke. He says he hadn't heard about the new museum, but since he didn't get the meeting he wanted, he'll be back.

"We're not getting the respect we deserve as employees," Allen says. "When I return — and we will return — I might stop in the art museum."

A visit to the museum is out of the question for Ernest David, who works at a Wal-Mart-owned Sam's Club in St. Louis, Mo.

"I have no interest in a museum because it might be full of lies," David says.

While it isn't clear yet how distrust of Wal-Mart might rub off on Crystal Bridges, Bacigalupi insists there's no connection between the two.

"I don't feel aligned with the corporation at all," he says.

According to Bacigalupi, nobody at Wal-Mart is involved with Crystal Bridge's daily operations — Alice Walton invested her own money into building the museum. Of course, her fortune is built on Wal-Mart stock.

"Even if it's not called [the] Wal-Mart Museum, it is Wal-Mart's money," says Lorraine Millot, a writer for the French newspaper Liberation who visited the museum for the media preview.

Millot praises the museum for its beauty. She says Crystal Bridges represents something very different from what Wal-Mart stands for. 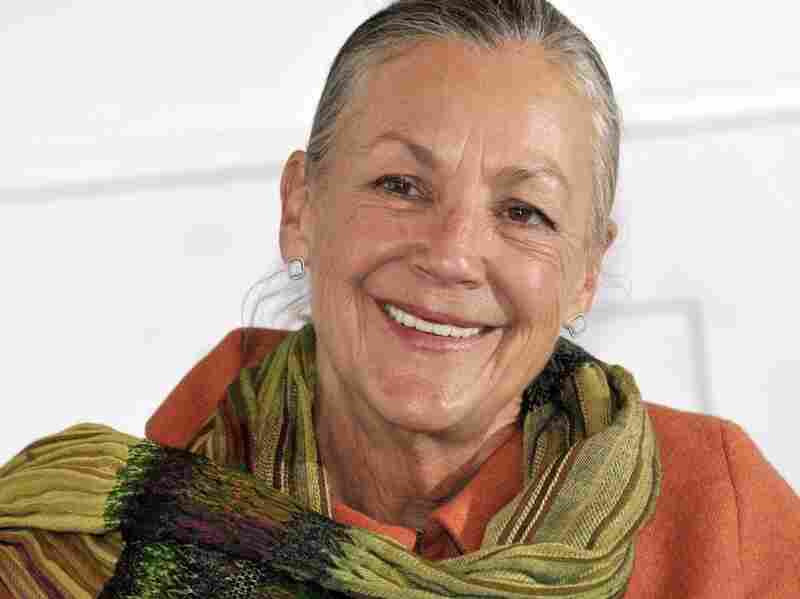 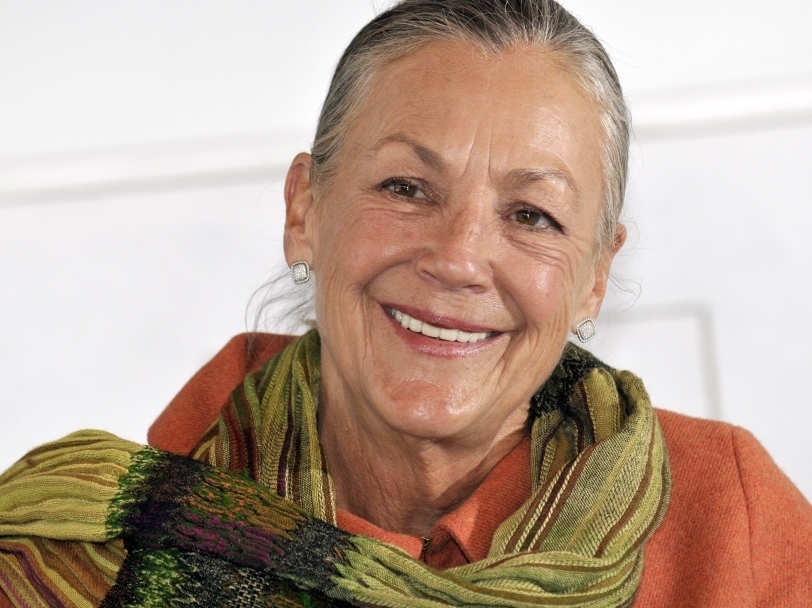 Alice Walton is the daughter of Wal-Mart founder Sam Walton. This year, Forbes magazine named her the 10th richest person in America.

"It's a place of pure beauty. It's just the opposite of what Wal-Mart's doing," Millot says. "The focus of the museum is American art, whereas Wal-Mart stores focus on cheap imports from China."

The Politics Of Philanthropy

There's no denying the contributions wealthy art patrons have made to America's cultural institutions. Steel tycoon Andrew Carnegie used his fortune to found Carnegie-Mellon University in 1904. Industrialist Henry Clay Frick opened his New York home and art collection to the public when he died in 1919. That same year, businessman Henry Huntington turned his ranch, library and art collection into a nonprofit educational trust known today as The Huntington Library, Art Collections and Botanical Gardens.

Before becoming Crystal Bridges' curator of American art, Kevin Murphy was a curator at The Huntington. He says people don't boycott museums just because the companies that funded them might have had unfair practices in the past.

"Do people not go to The Huntington because Henry Huntington was a railroad baron, was discriminatory in his practices and treated workers unfairly?" he asks. "I don't think people don't go."

Maybe not, but to get to Crystal Bridges, people will still have to go to Bentonville, and many will need more than a museum to draw them there. There's hiking in the Ozarks, or a side trip to the former 19th-century resort town of Eureka Springs, Ark.

And, if visitors aren't opposed to it, there's always the real Wal-Mart gallery.