Accessibility links
James Wolcott: 'Lucking Out' In 1970s New York The Vanity Fair critic was an aspiring writer when he arrived in a turbulent Manhattan in 1972. In his memoir, Lucking Out, he writes about the crime and culture (and pornography) he discovered there. 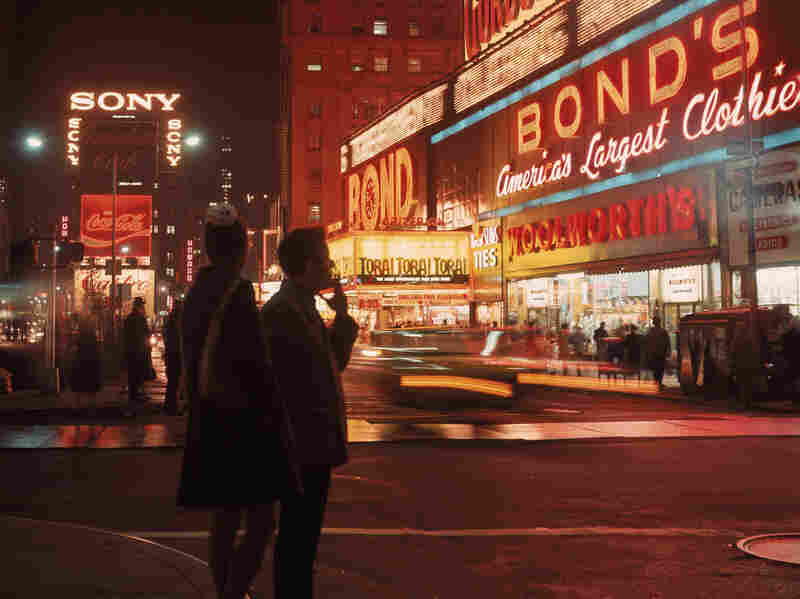 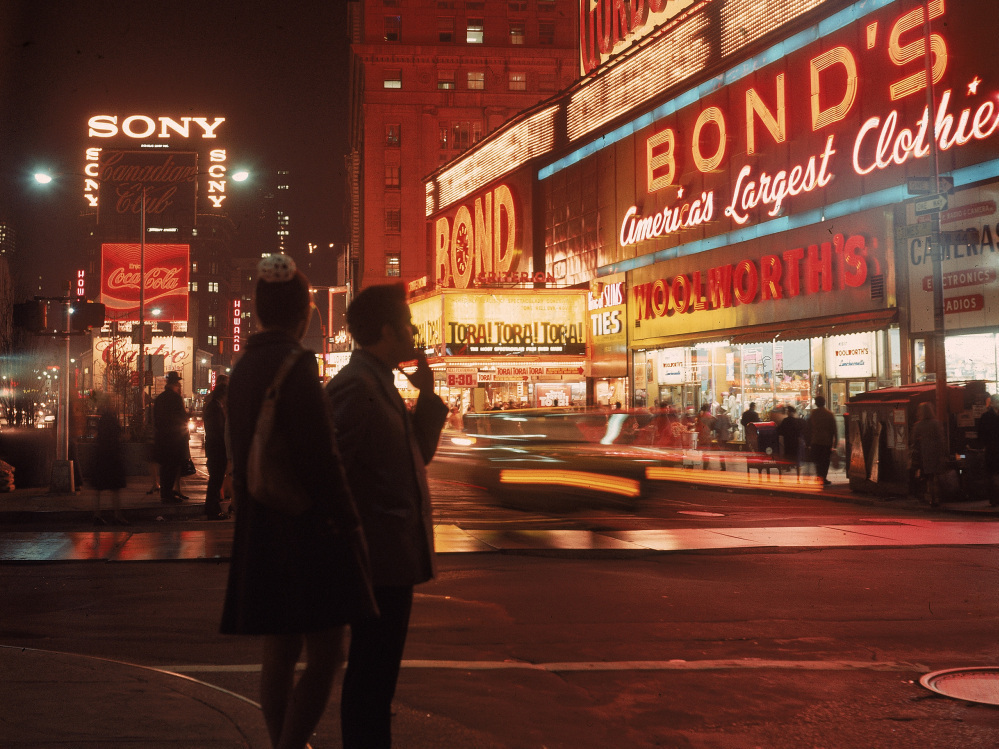 Two pedestrians stand on Broadway at West 44th Street in New York's Times Square on a November night in 1976. In his new memoir, critic James Wolcott writes about his life in 1970s New York.

When critic James Wolcott was a college sophomore, he wrote an article about Norman Mailer for his student paper. After the article was published, Wolcott found Mailer's address in a copy of Who's Who and mailed him a copy. Mailer wrote back.

"[He said]: 'When you leave college, I'd be willing to write a letter for you to editor Dan Wolf at The Village Voice," recalls Wolcott.

Wolcott knew he couldn't wait the two years until graduation. He wrote back to Mailer.

"I said, 'Can you write it now?' " Wolcott tells Fresh Air's Terry Gross. "And to Mailer's credit, he did it. And that's how everything got started."

Wolcott left Frostburg State College after his sophomore year and joined the staff of The Village Voice. It was the fall of 1972 and a time of great turmoil in New York City. Crime rates were soaring. The city was barely breaking even financially. X-rated movie theaters and prostitutes lined Times Square. 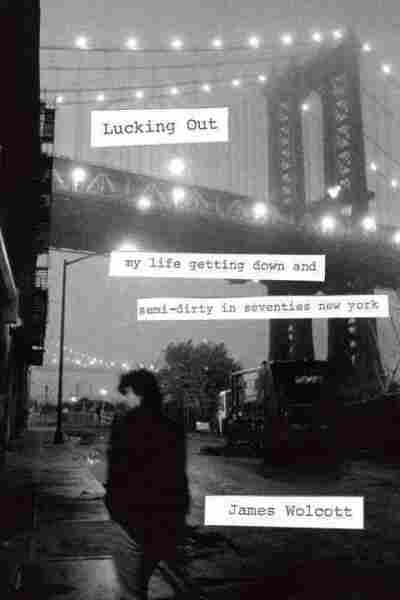 My Life Getting Down and Semi-Dirty in Seventies New York

"How lucky I was, arriving in New York just as everything was about to go to hell," writes Wolcott in his memoir Lucking Out. "I had no idea how fortunate I was at the time, eaten up as I was in my own present-tense concerns and taking for granted the lively decay, the intense dissonance that seemed like normality."

On Tuesday's Fresh Air, Wolcott reflects on that first decade he spent in New York, navigating the city amid its culture and crime.

"[Things] were beyond what I would have expected," he recalls. "I knew about prostitutes from movies, but I didn't actually ever see them working the street. When you see a prostitute pulling a knife on another prostitute, that's something suburban Maryland didn't prepare me for."

In the early years, Wolcott remembers writing about all sorts of topics. He covered political primaries, as well as municipal meetings, the punk-rock scene and New York's comedy clubs.

Wolcott eventually became part of an influential circle of young critics led by the The New Yorker's Pauline Kael. She had reached out to Wolcott after reading a piece of his in the Voice and started inviting him to movie screenings.

"That's part of the lucking out that happened to me," he says. "It wouldn't happen now, and not only because Pauline Kael isn't around. The whole culture of journalism has changed. ... We would go to screenings and invite people from The New Yorker and then [go] to the Algonquin or [a café] and talk over the movie."

"This was a time when New York Times editors would sneak off on their lunch hours and go see Deep Throat," says Wolcott. "When Deep Throat became a sensation, the kind of people who went to [the society hangout] Elaine's were going off there. ... You had to have an opinion about it."

Wolcott's opinion? "I was raised Catholic, so guilt is part of the package," he says. "It was my way of being bad, as it were, even though nobody was going to judge me. I was judging myself."

"Nobody ever came to the beginning of the movie and left at the end. Everybody arrived at different parts of the middle. Because no one was fooling themselves that they knew what the story was," he says. "So it was a transient experience."

James Wolcott has written for Esquire, The New Yorker, New York Magazine and The New York Review of Books. He is a longtime critic for Vanity Fair, where he writes about media and pop culture.

Read an excerpt of Lucking Out