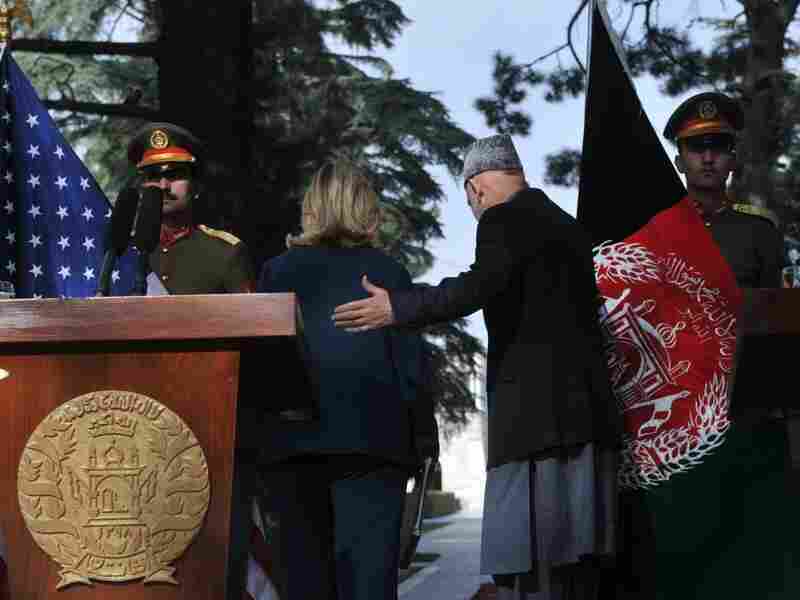 US Secretary of State Hillary Clinton and Afghanistan's president Hamid Karzai leave after a joint press conference at the Presidential Palace in Kabul on Oct. 20, 2011. Massoud Hossaini/AFP/Getty Images hide caption 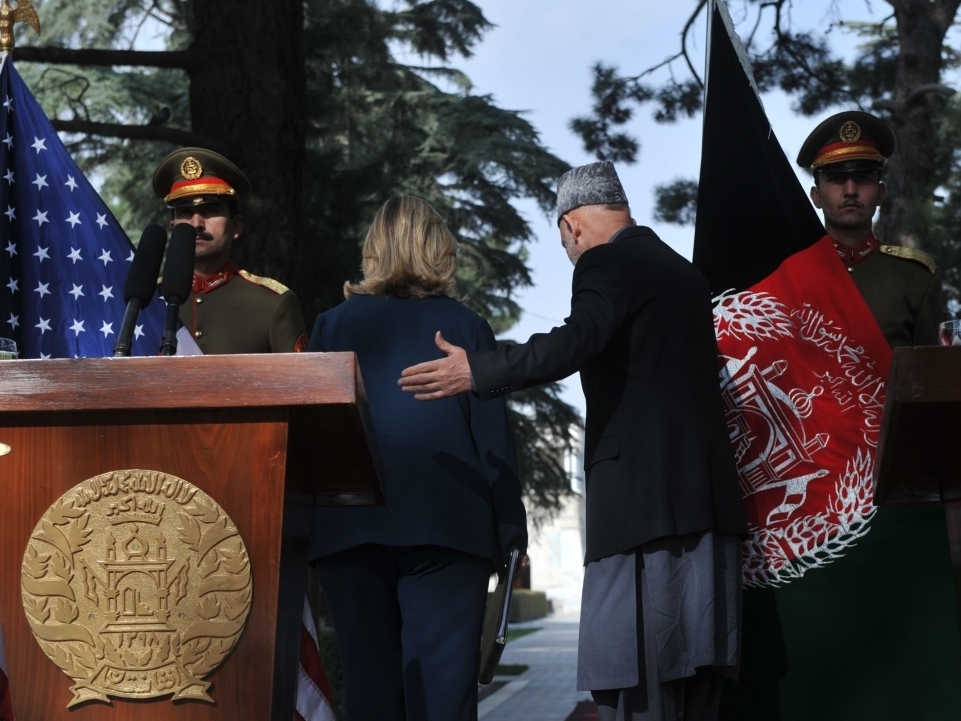 US Secretary of State Hillary Clinton and Afghanistan's president Hamid Karzai leave after a joint press conference at the Presidential Palace in Kabul on Oct. 20, 2011.

Read Another Opinion On Afghanistan

Steve LeVine is the author of The Oil and the Glory and a longtime foreign correspondent.

In an apparent part of an evolving U.S. exit strategy for Afghanistan, aides to Secretary of State Hillary Clinton have tasked U.S. embassies in Central Asia to re-categorize existing and planned U.S.-funded and other projects so they fit a controversial policy known as the "New Silk Road." In an "action request" cabled to six regional embassies last month over Clinton's name, the aides describe the New Silk Road as Clinton's "number one policy priority" for the South and Central Asian region.

The call — conveyed in an Oct. 18 cable obtained by O&G and entitled "Identifying New Silk Road Projects in Central Asia" — gave U.S. diplomats ten days to submit replies that could be unveiled ahead of large international summits scheduled around the subject of Afghanistan this month and next. Clinton already spoke of the initiative ahead of an Istanbul summit on Nov. 2, and the cable suggests it will form the hub of her message during a scheduled Dec. 5 Bonn gathering of some 85 foreign ministers who will be discussing Afghanistan.

The Silk Road idea involves overlaying the South and Central Asian region with a massive economic latticework including a natural gas pipeline, railways, an electricity grid and modern highways crossing Afghanistan. "A stable, secure, and prosperous Afghanistan is the heart of a stable, secure and prosperous region," the cable says.

The attempt to greatly magnify the U.S. economic presence in the region coincides with continued suicide attacks on U.S. troops in Afghanistan, and an Obama Administration decision to study a dramatic shift to a purely military training role as early as next year, as the Wall Street Journal reported last week. The Silk Road idea, originally promoted by a Johns Hopkins University professor named Frederick Starr, had already been embraced by key U.S. military officials eager for an elegant resolution of the troubled Afghan war including Gen. David Petraeus, now director of the Central Intelligence Agency.

But the idea has equally attracted skepticism (including on this blog). Last week at The Atlantic, journalist Joshua Kucera wrote that "hope may be the only thing driving on the New Silk Road."

The doubts are mainly that the idea, draped in the centuries-old romance of Kipling and Marco Polo, will struggle in the reality of war, unfriendly neighbors, corruption and a generally inhospitable environment. An absence of private interest in a couple of the central planks of the idea — a natural gas pipeline and an electricity grid — illustrates the fundamental insecurity that would face decades-long projects. History also argues against the plan — in the 1990s, an oil-and-gas pipeline proposal led by Unocal failed to navigate the fighting between the Taliban and other groups, and the presence of al Qaeda.

The State Department cable reflects an effort to demonstrate that the idea is gaining critical mass. One U.S. official who has seen the cable told me it seemed like "pressure on [U.S.] missions to come up with projects they can attribute to the New Silk Road (almost entirely an exercise in creative attribution), cables asking for ... agencies to reorient to provide the appearance of activity."

I was not able to confirm what data the cable succeeded in gathering. But it requested a broad sweep encompassing not just U.S. government projects, but any type that could fall under the Silk Road rubric. "The [South-Central Asia Bureau] would like [the] Post to identify a list of country or region-specific projects the [U.S. government] could highlight within the international community that exemplify and further the Secretary's vision of a New Silk Road," the cable said. "Towards that end, the Bureau requests Posts interact with government, private sector, donor community, or non-governmental contacts to identify projects that build or promote cross-border trade, energy, or infrastructure links between countries in the region. These projects may be under way, in the initial/planning stages, or conceptual."

Helping to advance regional integration through the New Silk Road vision certainly is a top priority because opening up transit trade, energy corridors such as the proposed Turkmenistan-Afghanistan-Pakistan-India pipeline, and regional integration more broadly would have a tremendous impact not only on Afghanistan but the rest of the region. We sent our instruction cable because it is important for us to have a full understanding of all the projects already under way or planned in the region so we and other donors could assess where we might be able to help. There is no effort to "reorient to provide the appearance of activity."