Accessibility links
Leibovitz Takes A 'Pilgrimage' For Artistic Renewal From John Lennon curled around Yoko Ono to a pregnant Demi Moore, photographer Annie Leibovitz has made a career of capturing people. But her latest collection is something very different. In Pilgrimage, Leibovitz focuses her lens on places and objects that have special meaning for her. 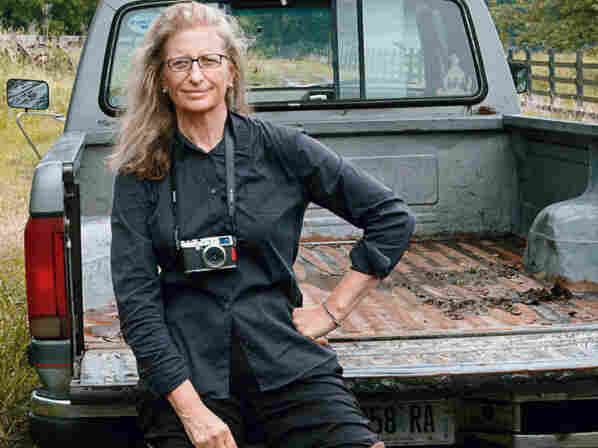 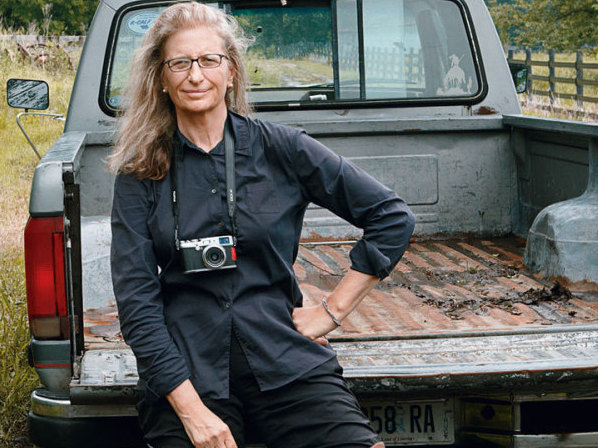 In 2000, the Library of Congress declared Annie Leibovitz to be a Living Legend. Leibovitz lives in New York with her three children.

From John Lennon curled around Yoko Ono to a pregnant Demi Moore, photographer Annie Leibovitz has made a career of capturing people, often celebrities. But her latest collection is something very different. In Pilgrimage, Leibovitz focuses her lens on places and objects that have special meaning for her.

Many of those sites are the homes and landscapes that prominent people once inhabited, such as Georgia O'Keeffe's homes in Abiquiu, N.M., and nearby Ghost Ranch, and Ansel Adams' darkroom in Carmel, Calif.

Leibovitz also photographed the artifacts of personal heroes and inspirational figures, including a heart target Annie Oakley once fired on, Emily Dickinson's only surviving dress and a 1957 Harley-Davidson Hydra Glide motorcycle Elvis Presley once owned.

Leibovitz and Doris Kearns Goodwin, who wrote the book's introduction, join NPR'S Neal Conan to discuss Pilgrimage, and how the project became a journey of personal and artistic renewal.

Tell us: What places do you visit to reinvigorate your artistic imagination?

On Niagara Falls, the image that inspired the book and graces its cover

Leibovitz: "I was in the middle of, you know, a pretty nasty year there, and my children were a little frustrated with me not being around as much as I should have been, and I took them for a trip to Niagara Falls. 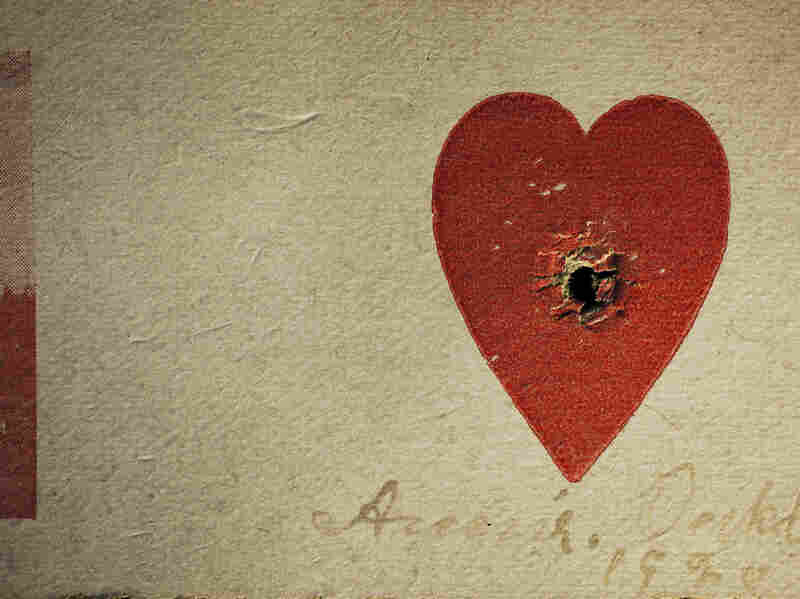 Annie Oakley was known to demonstrate her marksmanship by shooting through the center of a small heart on a card. See more photos from Annie Leibovitz's new book on NPR's Picture Show blog. Annie Leibovitz, from her book 'Pilgrimage,' Random House, 2011 hide caption 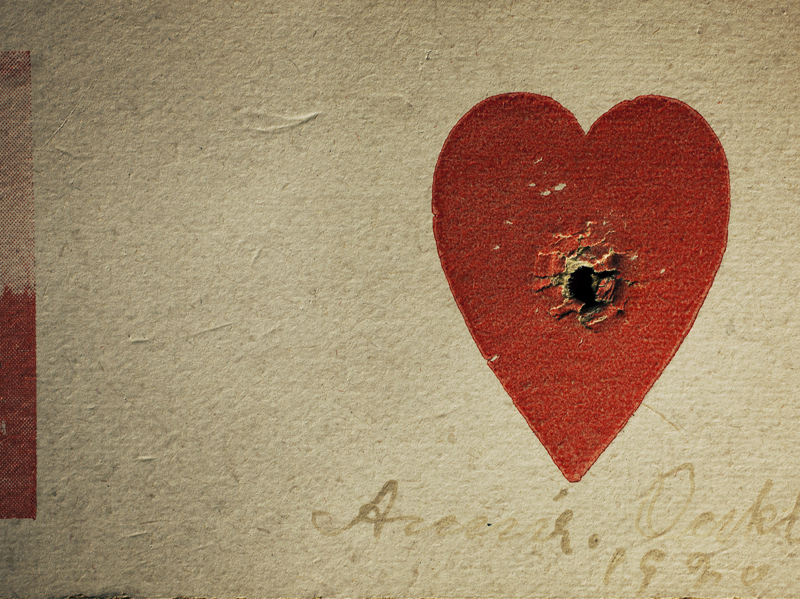 Annie Oakley was known to demonstrate her marksmanship by shooting through the center of a small heart on a card. See more photos from Annie Leibovitz's new book on NPR's Picture Show blog.

"And we stayed around our house in upstate New York, and I was, you know, not in the best of moods, but they were skipping around, having a great time. And I saw them sort of wander over toward a point where they overlooked the falls.

"And they were standing there ... mesmerized. And I walked over to where they were and I stood behind them and I saw this extraordinary vista — this sort of sense of floating over the falls, not unlike a Frederic Church painting, from a bird's-eye point of view. I mean, you can walk up to this point. It's not like it's a difficult place to get to.

"And I took the picture. ... This project was something that I had considered doing with Susan Sontag when she was still alive. And then after she died, it, of course, went away. ... But I sat down again and started thinking of places and especially with ... the introduction of the new digital camera, I was discovering that digital rendered in a more realistic way and you needed very little light.

"And so I was off. I was off. I made a crazy list, and just sort of went down a different path. I loved, I loved doing this project. It was great. It's endless. Every single subject that I encountered, you know, had mounds and mounds of history and thought. And I only touched lightly on a lot of it."

On what Leibovitz's photographs mean to a historian

Goodwin: "Nothing matters more than to be able to catapult oneself back into time, to the place where the person I'm writing about woke up in the morning and went to bed at night, you know, the paths they crossed, chairs they sat in, what they saw when they looked out the window. That's how you feel like you've re-created their daily life.

"And somehow what Annie's been able to do, from Eleanor Roosevelt's incredible house at Val-Kill, and then the sites in [Concord, Mass.] — which is my hometown — of [Ralph Waldo Emerson], [Louisa May Alcott] and [Henry David Thoreau], the studios, the workplaces, the libraries. It's a different way of looking at re-creating life than the faces of the person, but ... she has a visual genius." 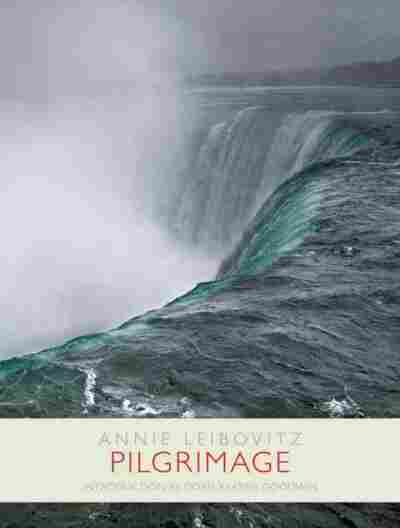 Leibovitz: "I couldn't quite understand how Julia Margaret Cameron did all of her pictures. It seemed like almost in a dark place. And she lived on an island. She lived on the Isle of Wight [in England]. And I never quite understood how that worked. And she was very close with [poet Alfred Tennyson] and walked the Downs every day.

"And I just thought it was strange that we never saw the island in those pictures — but of course not, because she was totally into the people she was photographing. And she was apparently a terror to have take your picture because, you know, in those days, you had to stay still for about seven or eight minutes, and her picture sessions have been described as very, very difficult.

"But the pictures were beautiful. They were extraordinary. They were not necessarily, you know, in focus. She had a lens that only had a very small focal length.

"And her son, who became a photographer, sort of berated her for her work being sort of soft. His work was very sharp, very clear, very well-developed, and it was kind of boring, you know, actually. So mistakes are part of what's important."

Leibovitz: "Probably the heart of the book, to me, is going out to [Santa Fe, N.M.] and seeing Georgia O'Keeffe's ... homes in [Abiquiu, N.M.] and Ghost Ranch. ... I just never had quite taken in how extraordinary she was. When I went to the home at Abiquiu, which she moved into after spending some time at Ghost Ranch, she went there for two reasons. One, there was a door in the patio area that she ended up painting over and over and over again.

"And then, that house had irrigation rights. So she could start her garden. So at the age of 50, she started a vegetable garden, and she started eating what she calls 'correctly.' But just to see how she lived and how frugally she lived and how sparsely she lived and ... how you need very little and, you know, her views. ... It was just a wonderful time to go through those buildings in that land and those vistas."