Accessibility links
Mississippi Voters Reject 'Personhood' Measure Voters in Mississippi have rejected an amendment that would have made it the first state to declare as part of its constitution that life begins at fertilization. As recently as a few weeks ago, the so-called personhood amendment was considered almost certain to pass. 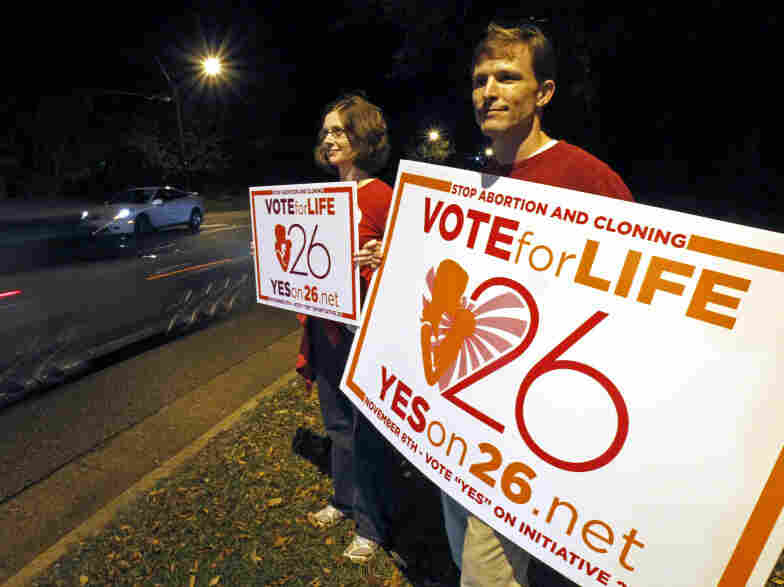 Adam and Debbie Browne tried to drum up support Tuesday for a proposed 'personhood' amendment to the Mississippi state constitution that was ultimately rejected by voters. Rogelio V. Solis/AP hide caption

Mississippi voters on Tuesday rejected an amendment to their state constitution that would have declared that life begins at fertilization.

The result was somewhat unexpected: As recently as a few weeks ago, the so-called personhood amendment was considered almost certain to pass. Voters in Colorado have twice rejected similar amendments to declare that life begins legally at fertilization, in 2008 and 2010. But Mississippi, with its far more conservative bent, was considered much friendlier territory.

Backers of the measure had made a special pitch to the state's large African-American community. In one ad, an ob-gyn named Freda Bush told voters, "You do not have to have a law or medical degree to know the truth and protect unborn babies from abortions."

Opponents of the measure, Amendment 26 on the ballot, argued — to some effect, as it turned out — that it simply went too far. One ad warned voters that the measure made no exceptions for cases of rape and would also ban birth control pills. (If it had passed, the amendment likely wouldn't have banned all birth control pills. But it would have banned those that work in part by blocking fertilized eggs from implanting in the uterus.)

Felicia Brown Williams, outreach director for Mississippians for Healthy Families, the group that successfully fought the amendment, says there was no single reason voters turned against the measure.

"I think it was just a matter of making sure that the voters were informed," Brown says. "And when they were, they came to our side."

But even with the loss, supporters of the amendment aren't giving up. Efforts are already under way to get similar constitutional amendments on the ballot in another half-dozen states next year, and to pass personhood legislation in at least two more states.