Accessibility links
Turks, Europeans Lead Charge On Libyan Investment International flights to Tripoli are packed with businesspeople looking to land contracts with the oil-rich state. Countries like France and Italy that supported the new government early on are expected to become favored trade partners. But there's been a noticeable absence of American businesses. 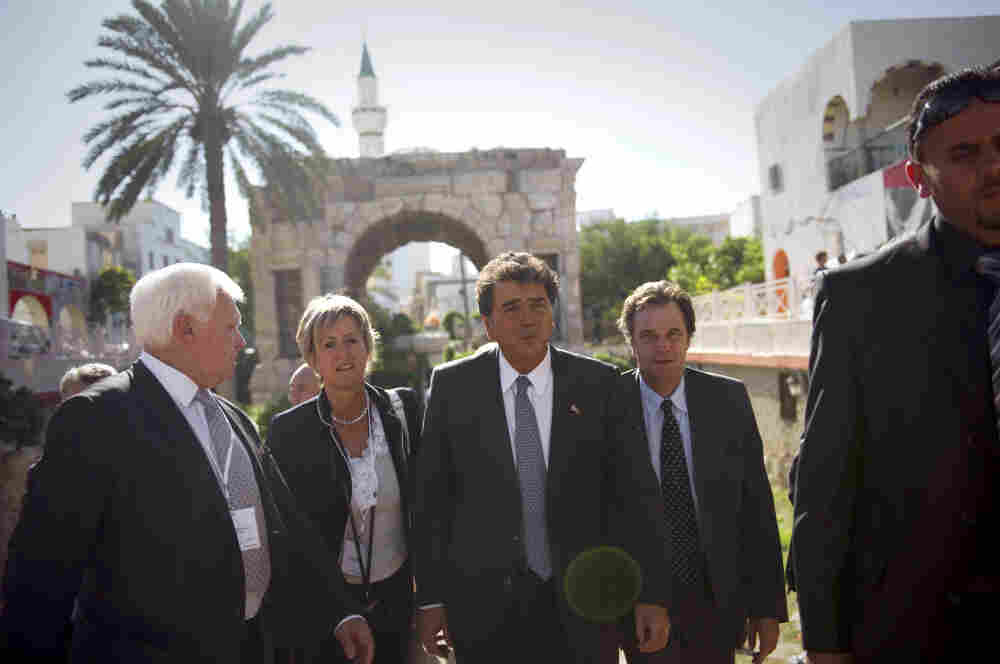 Libya may be months from a new government, but the still-infrequent international flights to Tripoli are packed with businesspeople looking to land contracts with this oil-rich North African state. The Turks and Europeans appear to be moving quickly, while the Americans seem to be several steps behind.

On one recent afternoon, the plush Rixos hotel in Tripoli hosted hastily organized meetings between Libyans and a swarm of Turks representing 150 different companies.

Turkey has never been shy about doing business in Libya, handling tens of billions of dollars in projects for the regime of former dictator Moammar Gadhafi. Some of these businessmen are in Libya to check on existing projects, while others are looking to ink fresh deals with the country's new leaders, whoever they may turn out to be.

Ferzat Mercan is with Dorce, an Ankara-based contractor and manufacturer of prefab buildings that has projects in Kazakhstan, Iraq and Gadhafi's Libya. Still, Mercan says he prefers a transparent, free-market oriented government, and hopes that's what's coming to the new Libya.

"Libya is a huge market. However, we have elections in the near future, so many things [may] start slowly. But it will come," Mercan says. "The new government [is] not elected yet, [but it will come from] the center of the people — so when you work with them you feel more comfortable."

As trade meetings continue, so does speculation about which countries may become Libya's favored trade partners. Some suggest that Russia and China will face a cool reception, at least at first, for their opposition to the NATO air campaign in Libya. France, Italy and Qatar, early recognizers of the Transitional National Council, are expected to be viewed with favor, and the Germans also have strong oil and gas ties in the country.

Largely absent so far is the U.S. Amid the sea of Turks at the Rixos hotel gathering was a lone Libyan-American, Omar Khattaly, with a mergers-and-acquisitions company in Atlanta.

"There's tremendous opportunities in tourism, energy sectors, agriculture, construction [and] medical; the country needs hospitals," Khattaly says. "And I think the American businessmen do need to be here. Everybody's asking."

Not everyone is in a hurry. Analysts note that only a limited number of infrastructure contracts are likely to be awarded in the short term. Meanwhile, crucial regulatory and tax structures remain up in the air.

Yusuf Yildiz, commercial counselor at the Turkish Embassy in Tripoli, says even though the Turks are showing up early, they have an eye on the longer term.

"We see Libya, besides Egypt, as a gate to the other African countries as well. So that's why industrialization and development of Libya is a very important issue," Yildiz says.

For example, Yildiz says the state-owned companies created under Gadhafi are likely to be privatized now. He anticipates that foreign investors will still need Libyan partners, but hopefully under more transparent conditions.

"My opinion is they are going to set the regulations like the Gulf countries: at least [a] 51-49 partnership. That's the system that is going to be established. But it will take years for this," he says.

For the Turks and many others, the risks are worth it to obtain or regain a foothold in a country with lucrative resources and a burning desire to spread the wealth across a population long trapped under Gadhafi's boot.