Accessibility links
Cain Donors Stand By Their Man For Now NPR spoke with nearly two dozen Herman Cain campaign donors. Most say they don't believe the sexual harassment accusations and that they will consider giving more money to his campaign; two said they already had. But others are wavering, ever so slightly. 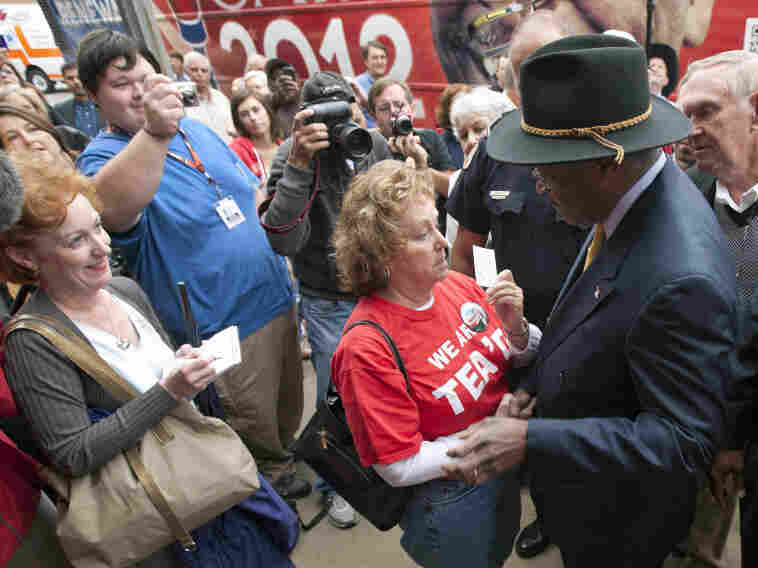 Republican presidential candidate Herman Cain met with supporters in Talladega, Ala., on Oct. 28, before allegations of sexual harassment against him surfaced. Dave Martin/AP hide caption 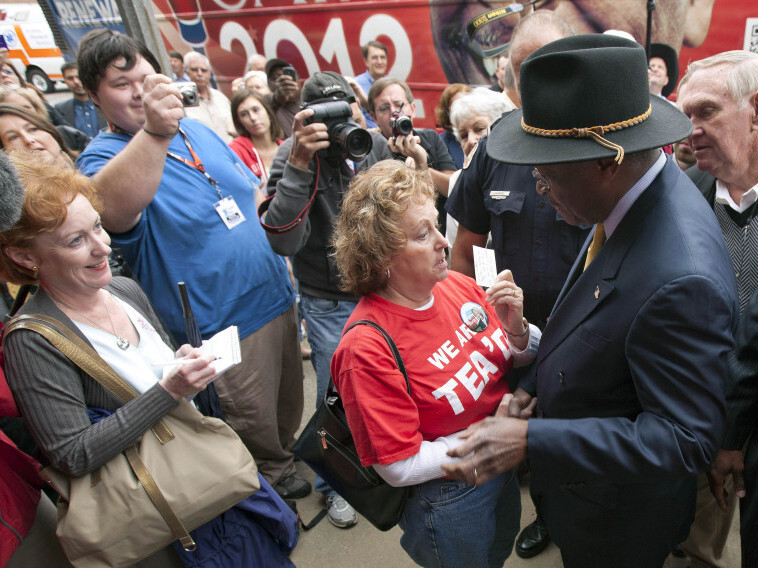 Republican presidential candidate Herman Cain met with supporters in Talladega, Ala., on Oct. 28, before allegations of sexual harassment against him surfaced.

When talking to people who have given to a candidate's campaign, you'd expect to find true believers.

"I liked what I heard, and he seemed to be the kind of person that I would like to see be president of the United States," says Carl Ploeger, who has donated twice to embattled GOP hopeful Herman Cain.

An NBC News-Wall Street Journal poll released this week shows that Cain's favorability rating among Republican primary voters remained unchanged over the past month, despite accusations of sexual harassment that surfaced last week. The same poll showed his negatives more than tripled. Cain says all the controversy has actually helped his campaign.

"I just haven't believed it," says Pam Bensen of the accusations. "In fact this morning, I actually went online to donate again, just to show him that we were supporting him."

Bensen doesn't have a lot of faith in the media. She echoes a view held by many conservatives.

"It will take a lot more for me to abandon him," Bensen says. "I mean, we've had a president who did a lot worse."

Most donors we spoke with say they don't believe the charges and that they will consider giving more money to his campaign; two said they already had. But others are wavering, ever so slightly. Ploeger has been watching this closely and says Cain's press conference Tuesday wasn't totally satisfying.

More On The Cain Allegations

"Nobody still knows what's happened, and it all boils down to who you believe," Ploeger says. "I am still inclined to believe Herman."

Ploeger says it would be a shame if this knocked Cain out of the race. He has given the campaign $1,500 so far this year and says he would like to give more.

"I will probably wait another week or so to see if this story lingers on," says Ploeger. "If it lingers on another couple of weeks it will probably damage him beyond repair."

As much as he believes Cain should be president, Ploeger says it is most important to him that the Republican nominee has a real chance to go up against President Obama.

Michele Bosack gave the Cain campaign $1,000 back in August. He is the first candidate she's ever given a substantial donation, and she feels like the political establishment is just trying to make him go away. Still, she's not rushing back to donate again. She says she's going to give it a week.

"If this sort of shakes out and it just looks like a takedown," then Bosack says she will make another donation. "But I am not ready to make a call."

But she says if it turns out there is any truth to the accusations, she "probably won't donate any more money. But I will probably still be behind him because I still feel like he is the best person to help this country."

This continued support is unsurprising from early primary season donors, says Michael Malbin, professor at the State University of New York at Albany and executive director of the Campaign Finance Institute. He warns that loyalty will only go so far.

"Once a campaign starts spiraling downward, then even the true believers find that they have alternate sources for their disposable charitable money," says Malbin.

He isn't saying the Cain campaign is spiraling, though. That's not clear yet.

Cain claims to have raised more than $1.1 million just since last week, which is about a fifth of what he had raised all year.