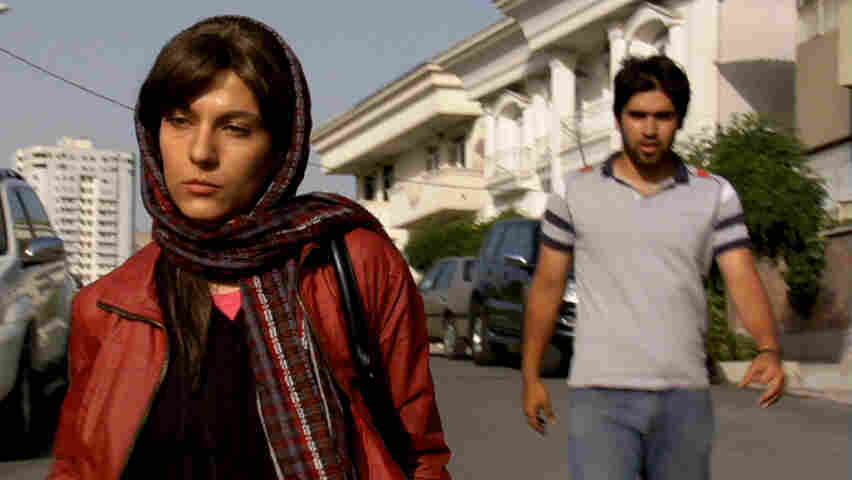 In Farsi with English subtitles

Two parallel scenes exemplify the difference between Hossein Keshavarz's Dog Sweat and sister Maryam Keshavarz's Circumstance, both of which are set in Tehran. In her film, two teenagers visit a large illegal rave club that seems transplanted from Los Angeles or Berlin. In his, three layabouts hang in a small bedroom, drinking illegal booze and grooving to techno while one guy flicks the light switch to simulate a dance-club strobe.

Dog Sweat is not the more artful of the two movies, but it does seem the more clear-eyed. Actually shot in Tehran — Circumstance was filmed in Lebanon — Hossein's ensemble drama is an astonishingly gutsy proposition. If it sometimes seems undercooked, that's an understandable flaw for a movie whose making was utterly illegal.

From 'Dog Sweat' - 'The Streets Of Tehran'

'The Streets Of Tehran'

The script, written by Keshavarz and co-producer Maryam Azadi, follows a half-dozen overlapping stories of discontented youth. Dawood (Ahmad Akbarzadeh) has just returned from film school in LA and takes up with one of his sister's friends, Katherine (Sara Esfahani). She decides she's ready to have sex, but she and Dawood struggle to find a private place to consummate their relationship. (In one revealing scene, Dawood tries to book a hotel room, but the bellboy's uniform looks too much like a cop's.)

Dawood's lovely, willful younger sister, Katie (Tahereh Azadi), is having an affair with a married man, the husband of her cousin. When he transfers his affections to another young woman, the bereft Katie considers marrying an admirer she doesn't much like, let alone love, because he promises to take her to Dubai.

Mahsa (Maryam Mousavi) is pursuing an underground career as a Persian-rock vocalist, even though women are forbidden to perform publicly in Iran. When her studio-engineer friend gets in trouble for recording a woman's voice, Mahsa decides to retreat into an arranged marriage. Her potential husband has a different sort of problem with Iranian taboos: He's gay. Hooshang (Rahim Zamani) thinks he can wed and still keep boyfriend Hooman (Bagher Forohar), but Hooman doesn't like the idea.

Meanwhile, the three slackers who open the movie arguing over the quality of various brands of "dog sweat" — Iranian code for alcoholic beverages — sober up when one learns that his mother has been seriously injured by a careless motorist. Massoud (Shahrokh Taslimi) feels grief at first, but then rage, which he targets at both Iran's government and Islam itself.

Dog Sweat joins a small set of one-shot movies, including Circumstance and Bahman Ghobadi's Nobody Knows About Persian Cats, made by directors with no hope of returning to Iran anytime soon. (The Keshavarzes are American citizens; Ghobadi made his latest film, Rhinos Season, in Turkey.) These movies are far more direct in their depiction of Mahmoud Ahmadinejad's Iran than the work of established Iranian filmmakers (some of whom have, nonetheless, been sent to prison for their efforts).

Keshavarz and his small crew didn't risk photographing anti-government demonstrations, but the discontent of his characters — all of them from Tehran's more affluent precincts — is palpable. And a surprisingly large amount of the action was shot outside, providing the movie with a strong sense of place. But the most shocking moments were filmed behind closed doors: not sex, which is all kept offscreen, but images of women, young and old alike, with unveiled hair.