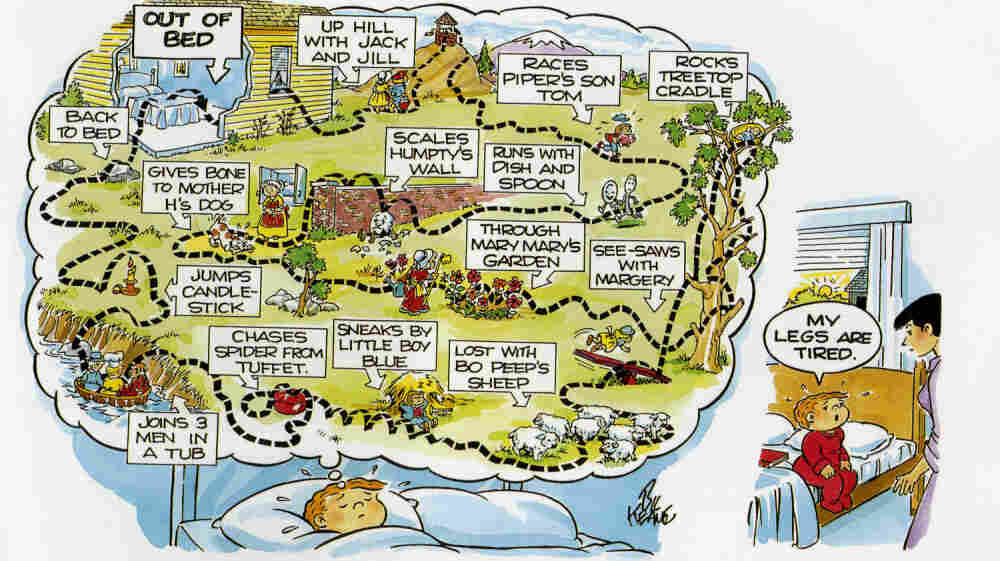 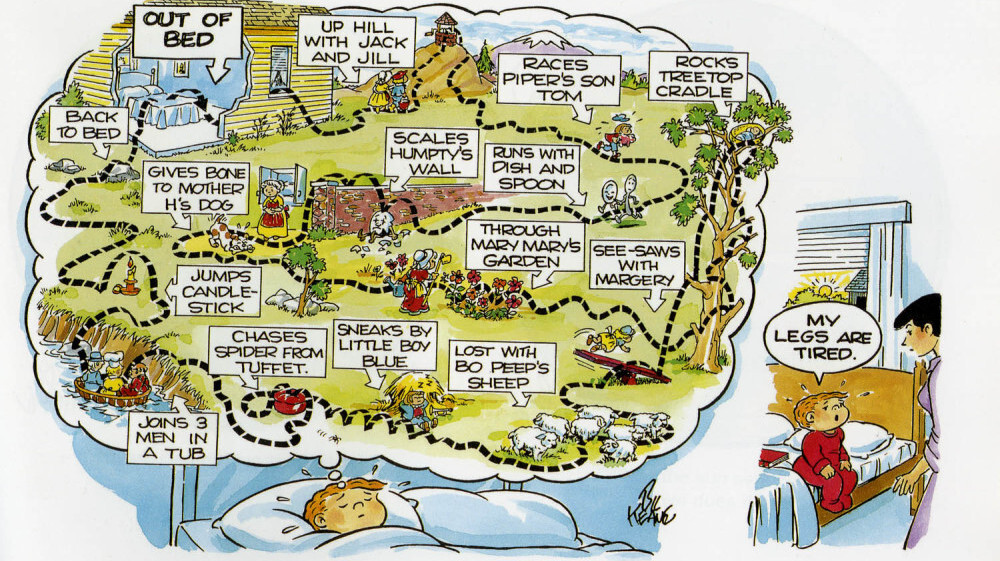 In this Bil Keane Family Circus, Jeffy wanders the neighborhood in dreams.

The encomiums for Family Circus creator Bil Keane continue to pour in. The best of them, like this one from the AV Club's Sean O'Neal, find a respectful way to acknowledge the strip's evolution from its early status as a relatively hip (and sometimes downright saucy) gag strip, to its more familiar status as ... precisely none of those things.

Like Bill Watterson's Calvin and Hobbes, Keane's strip specializes in capturing discrete snapshots of that particular phase of kid-hood when magical thinking (the invisible gremlins of Ida Know and Not Me, for example) bleeds harmlessly into regular thinking. (Consider: When 3-year-old Jeffy sees the spirits of his departed grandparents floating over the kitchen table, the reader thinks, "D'awww. This one's going on the fridge!" If the teenage kid in Zits were to see the same thing, the reader's mind would teem with concerns about early-onset schizophrenia.)

Keane proudly — and in later interviews, defiantly — trafficked in the wholesome, and his fellow cartoonists respected him for it. At first glance, the sensibilities of Bil Keane and Lynda Barry, for example, might seem diametrically opposed, but Barry has spoken often of what The Family Circus represents to her, most recently on her blog in the wake of Keane's death:

I was a kid growing up in a troubled household. We didn't have books in the house but we did have the daily paper and I remember picking out Family Circus before I could really read.

There was something about the life on the other side of that circle that looked pretty good. For kids like me there was a map and a compass hidden in Family Circus. The parents in that comic strip really loved their children. Their home was stable. It put that image in my head and I kept it.

My own household wasn't particularly troubled, so The Family Circus didn't carry anything like that emotional weight. But it was a much-anticipated fixture of Sunday mornings. Especially the "dotted-line comics."

These were strips bursting with color and detail, which told a story — actually several mini-stories — in a single, vast, mural-like panel. To accomplish this, Keane pulled back — way back: we readers suddenly found ourselves looking down upon the family's pristine suburban development like a benevolent god.

A dotted black line followed a character's (usually Billy's or Jeffy's) carefree peregrinations through the privet-lined, strangely carless, possibly post-Raptured streets of his neighborhood. Here, Billy dallies on a jungle gym. There, by the babbling brook, he catches polywogs. And all the while, that dotted black line follows him, jumping over tree stumps and skirting around barking dogs.

It's impossible to read these strips, which depict a small child blithely wandering on his own through verdant backyards and quiet cul-de-sacs, without feeling a pang of nostalgia for a time before stranger-danger and Amber Alerts. But that's exactly what Keane was selling, of course. Because his dotted line always, always circled back to end where it began: On the doorstep of the family home.

The Sunday dotted-line strips required a level of planning — and evinced a clean, meticulous draftsmanship — the daily strips never needed to. As I grew older, I began to appreciate the way Keane cheated the perspective so as to fill the entire panel with detail — even those places and objects farthest away from the reader's eye.

To a suburban kid, these strips provided a new and quite literal perspective on my world, which so closely resembled the four-color, zipatoned Levittown Keane depicted.

Reading them in the car on the way home from church, those strips were like tiny, epiphanic visions. It was the easiest thing in the world to see myself as Jeffy; the realization that all the adventures that filled my days could fit below the fold of the Sunday funnies was jarring. Those strips took me out of the everyday and let me see what my life looked like, at a remove.

As a man of devout faith, Keane likely suspected that his strip could provide comfort and hope to kids like Lynda Barry. Could he have imagined that his dotted-line strips might also have the power to send bored, broody, indoorsy kids like me down so many existentialist rabbit-holes?