Accessibility links
The Shortage Of Women In Silicon Valley The problem is not only the small number of women with bachelor's degrees in computer science coming in the door; it's also the industry's inability to retain them. Women leave their technical jobs far more often than men.

This week thousands of women gathered in Portland, Ore., for the Grace Hopper Celebration, the world's largest technical conference for women and computing. High-tech companies are hiring, but there aren't nearly enough women to meet the demand.

Kate Schmalzried, a graduate student at Stanford, recalls one of her very first classes at the university — Computer Science 106A.

"That was really a good introduction to women in tech — there weren't many women in the class," she says, chuckling. "I distinctly remember being the only girl in my section."

The Anita Borg Institute For Women And Technology
The Grace Hopper Celebration Of Women In Computing
Carnegie Melon University: The Ada Project
University of Bristol: Famous Women In Computer Science

It's no secret that beginning in middle school, young women often lose interest in math and science. So it's not surprising that relatively few women sign up for computer courses in college. When they do, they are often at a disadvantage.

"I remember on the first day, the guy sitting next to me telling me how he had coded a search engine — are you kidding me?" she says. "I'd never coded anything."

Schmalzried was able to catch up, but says by the second semester fewer than half the original women were still in the course.

Indeed, nationwide only about 20 percent of the bachelor's degrees in computer science go to women.

"One of the things that's a barrier to our ability to grow is our ability to hire the best talent," he says. "If we could get more women to go into computer science, we would have more talent to hire from." 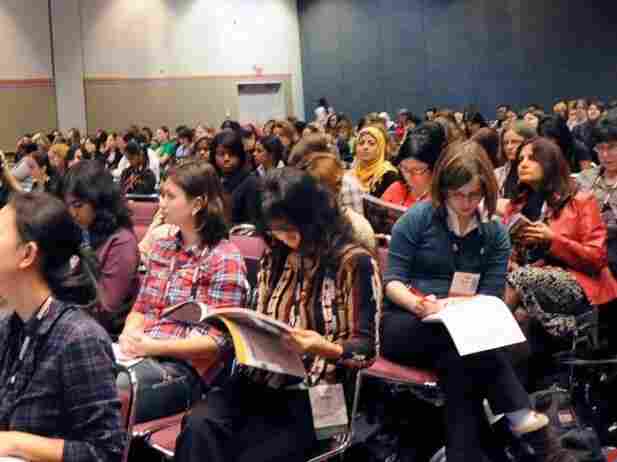 Women attend a talk on Wednesday at the Grace Hopper Celebration of Women in Computing in Portland, Ore. The conference offers mentoring and recruiting for women in technology fields. /Courtesty Anita Borg Institute hide caption 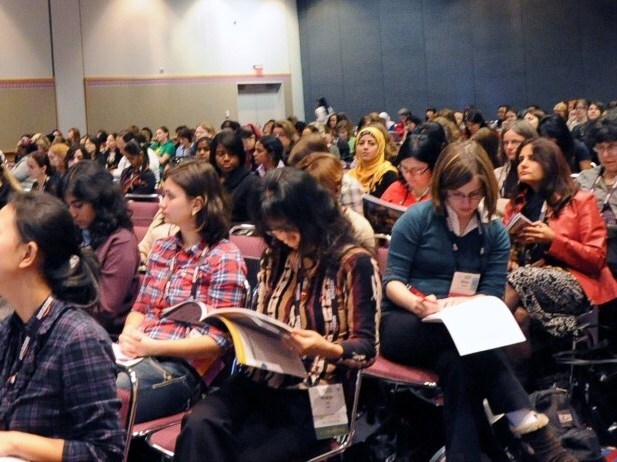 Women attend a talk on Wednesday at the Grace Hopper Celebration of Women in Computing in Portland, Ore. The conference offers mentoring and recruiting for women in technology fields.

Bregman, now a senior executive at a company called Neustar, says there's an acute shortage of computing talent. He worries not only about the small number of women coming in the door, but also about the industry's inability to retain them. They leave their technical jobs far more often than men.

Bregman cites empirical and anecdotal evidence that teams with men and women are often more productive and build products that are more interesting. Take Symantec's effort to develop software to limit what kids could see and do on the Internet.

"The initial engineering approach was, 'We will just block the bad stuff.' And through some of the internal discussion, it became clear that that's not really going to work because the kids will get around it," he says. "So rather than do that, let's do something that enhances the dialogue between parents and kids about what is safe behavior on the Internet. That's very different than the engineering-driven — I'll use the term 'male' — approach, which just says ... yes or no."

In an effort to bring in more women, Bregman began requiring hiring managers to interview women for engineering jobs even if on paper they weren't as strong as the male candidates. Once in the door, they often demonstrated their worth and got the jobs.

Other companies have their own initiatives.

"One of the things Facebook has that I love is the parental leave," she says. "Facebook offers four months' paid parental leave not just to women but also to men. And because the men are taking it, it's not this abnormal thing that only affects the one person on the team who is a woman."

Over time, that should help women whose careers have often been derailed by maternity leave.

But there's something quietly insidious happening in many high-tech companies: Female engineers, more often than men, end up in testing or in project management positions, which usually pay less and carry less status, so moving up the career ladder becomes more difficult. And when women aren't promoted, they are more likely to leave.