Accessibility links
The Nation: Tunisia Is A Lodestar Worth Following Is Tunisia still a guiding force in the Arab Spring? The Nation's Graham Usher explains why an emerging coalition between moderate Islamism and progressive social democracy may be the best bulwark against autocracy and extremism in the region.

The Nation: Tunisia Is A Lodestar Worth Following

The Nation: Tunisia Is A Lodestar Worth Following 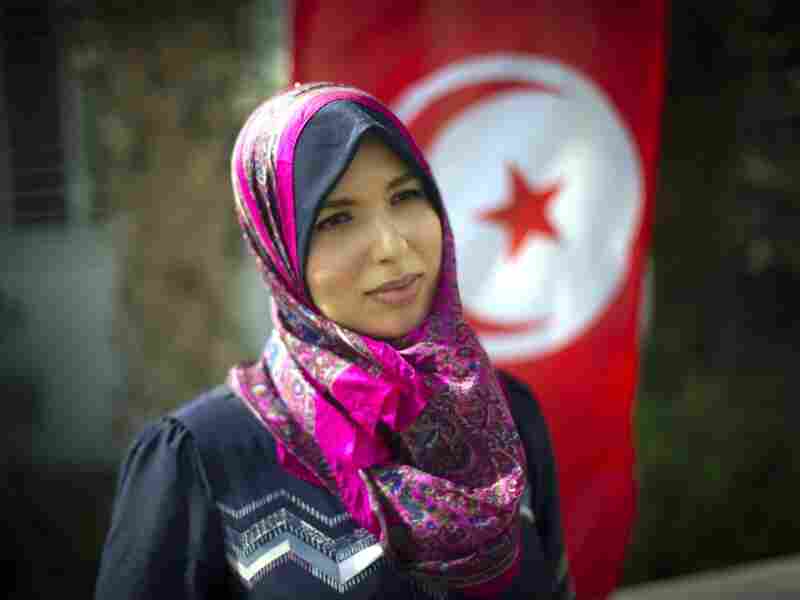 Rached Ghannouchi's daughter, Intissar, is pictured at Tunisia's main Islamist party Ennahda's headquarters on October 24, 2011 in Tunis. Rached Ghannouchi is the leader of the Islamist Ennahda party which claimed to have captured about 40 percent of the vote in the country's first free polls. Lionel Bonaventure/AFP/Getty Images hide caption 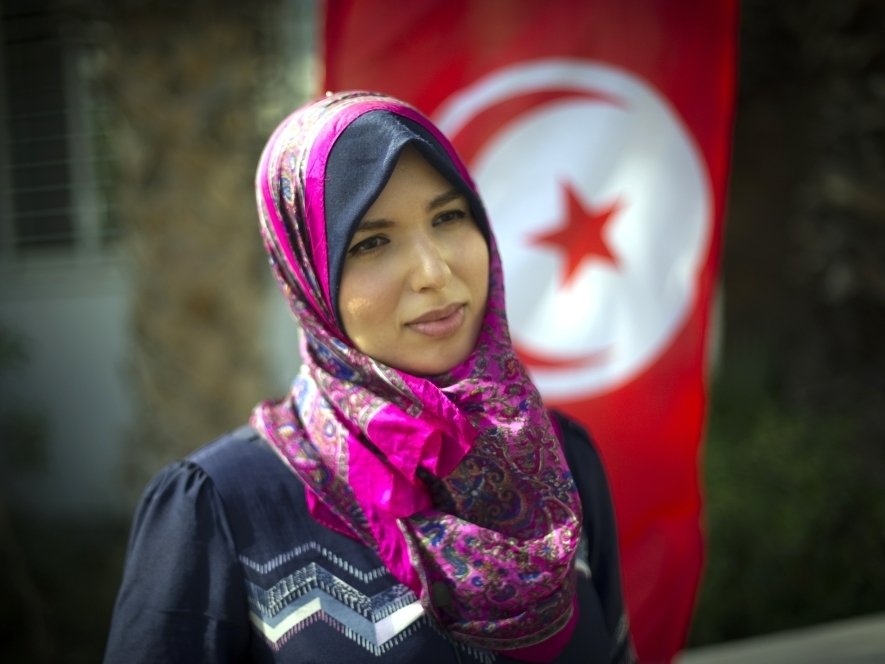 Rached Ghannouchi's daughter, Intissar, is pictured at Tunisia's main Islamist party Ennahda's headquarters on October 24, 2011 in Tunis. Rached Ghannouchi is the leader of the Islamist Ennahda party which claimed to have captured about 40 percent of the vote in the country's first free polls.

Read Another Opinion On Tunisia

Graham Usher is a writer and journalist who has written extensively about the Arab world and South Asia.

In January Tunisia toppled the first dictator of the Arab Spring. Last month it held its first election. Both events, mostly, went peacefully. That is perhaps the country's greatest achievement. There are others.

There were glitches. Violence flared in Sidi Bouzid after the ISIE banned the party of the winning local candidate for financial irregularities (it had allegedly received cash from the outlawed ruling party of the ousted Tunisian dictator, Zine el-Abidine Ben Ali). Sidi Bouzid was where the vendor Mohamed Bouazizi set himself and thence the region ablaze in protest at being poor and powerless.

But the political outcome was definitive. The Islamist Nahda (Renaissance) party won 41 percent of the vote, or three times as many votes as its nearest rival, the secular Congress for the Republic (CPR).

The Islamists have ninety seats in a 217-member Constituent Assembly. This will draft a new Constitution, appoint an interim government and set new elections, probably in 2013. Rachid Ghannouchi, Nahda's septuagenarian leader, says he wants to govern through a national unity coalition, and hopes a new Constitution can be written "within a year."

Nahda's success was due to a well-funded campaign that reached every hamlet in Tunisia. The party drew kudos from years of resistance to the Ben Ali dictatorship. And it promulgated an inclusive politics that vowed to match Tunisia's "Arab and Muslim heritage" with a pledge to protect its modern ethos, including rights for women that are the most advanced in the Middle East. "We want to enter modernity as Muslims, not unbelievers," said Ghannouchi.

This suggests a new kind Islamist politics that works within Westernized notions of citizenship, rather than against them, the usual cry of political Islam in the Arab world. How well that politics works out will be Tunisia's democratic lodestar, not only for itself, but the region. It faces two challenges.

Nahda leaders say their priority now is not faith, but jobs. After ten months of revolutionary upheaval, the economy has tanked, prompting often violent protests against penury, particularly in Tunisia's fly-blown interior. Among those under 30—the class and generation that drove Ben Ali from power—joblessness is 23 percent. Tourism, supplying one in every five jobs, is barren. Growth is less than 1 percent.

The challenge is how to revive the economy while charting a course that will gradually redistribute wealth away from the richer coast to an aggrieved interior. Nahda's first move has been to reassure local and foreign capital that Tunisia is "safe" for investment, particularly in the "strategic" tourist sector that, the Islamists vow, will be unharmed by any bans on alcohol or bikinis.

But its second move has been to invite into coalition the humanist CPR party and socialist Ettakol party, both of which want to tilt Tunisia's deeply unequal society in favor of the poor. How the new government combines growth with fairness remains key, especially for a people demanding both.

As daunting is how it negotiates a new place for Islam in a political culture that since independence has defined Francophone secularism as the touchstone of Tunisian identity. The public struggle will be over who will have most sway in drafting the Constitution. But that struggle masks a deeper one about cultural identity and which class—the Westernized secular elite or the newly enfranchised but conservative poor—will lead in the new Tunisia.

The contest will be not so much between Islam and democracy, says a secular party leader, as between "two competing visions for our future. One is conservative, rooted in religious observance; the other is progressive, modern and forward looking."

The elections have given a sense of which vision most Tunisians prefer. Nahda not only swept the field; it established itself as the country's national party, bridging the divide between rich and poor, coast and interior. It came top in all of Tunisia's twenty-seven electoral districts save one, and including Tunis, the elite's cosmopolitan citadel.

How come? It's true the Islamists ran a well-organized campaign. But the principal reason was that their advocacy of religion resonated with most Tunisians, at different levels, but mainly as a critique of the past.

For the devout it meant restoring Islam, against a secular "modernist" state that persecuted all signs of overt religiosity. For the traditional working class it meant returning morality to politics, against the epic venality of the Ben Ali era. And for the young, poor and disenfranchised, it meant a sense of community, against a model of economic development where the choice was between migration and the menial.

Some secular parties like CPR and Ettakol understood the weight of this sentiment, which is why they responded to Nahda's call to national unity. But others did not. The centrist Progressive Democratic Party (PDP) and Eurocentric Modern Democratic Pole (MDP) ran negative campaigns against Nahda, warning that a vote for Islam would endanger Tunisia's secular identity and liberal social mores.

That charge scared only the few. For the overwhelming mass of Tunisians, Francophone modernity has masked and licensed fifty years of authoritarian dictatorship. And while Tunisia's gender code is undeniably free, that freedom stopped for a woman the moment she put on a veil. Far from being "progressive, modern and forward-looking," many Tunisians deemed the PDP and MDP elitist and regressive, little more than holdovers from the old regime. The PDP won seventeen seats; the MDP five, including four in Tunis.

It's risky to extrapolate too much from the Tunisian experience. Small, ethnically and religiously homogeneous and educated, the country was always well groomed for democracy. But Tunisia does offer pointers to Egypt and Libya, both in the midst of rocky democratic transitions.

One is a political compact made possible by Tunisia's interim government. Secularist CPR and Ettakol accept "Islam as the religion of state," says CPR leader Moncef Marzouki. Ghannouchi says he accepts a Western "notion of citizenship as the basis of rights, so that all citizens are equal whether they are Islamist or not." Such a compromise could seal a Constitution that would satisfy most sides of Tunisia's class and ideological divide. It could serve as a similar bridge in Egypt and Libya.

Second, Tunisia's emerging bloc between a moderate Islamism and a progressive social democracy may be the best political bulwark in Egypt against a military that seems ready to fan sectarian flames to ensure its economic interests and hegemony. Finally, the spectacle of 100 parties and not a single militia contesting Tunisia's elections is the best antidote to Libya, where the ratio is about the reverse. There too, a bloc between moderate Islam and progressive democrats would seem the best insurance against an Afghan-like descent into armed fiefdoms.

Things could go awry in Tunisia. Nahda's young cadres may prove nowhere near as accommodating as their leaders when it comes to Islam, secularism and the Constitution, especially when goaded on their piety by Salafi groups. And the violence in Sidi Bouzid—whatever the spark—shows there remains an incendiary underclass in Tunisia irked by a revolution for which it paid most but, so far, has received least.

Still, in less than ten months, Tunisia has overthrown a dictator and conducted an election better than anyone could dare hope. It remains a lodestar worth following.