Accessibility links
Berlusconi's Days As 'Great Seducer' May Be At End The Italian prime minister has promised to resign now that the nation has passed an austerity package. This time, for the first time, there may be no bouncing back for the canny political survivor.

Berlusconi's Days As 'Great Seducer' May Be At End

Berlusconi's Days As 'Great Seducer' May Be At End 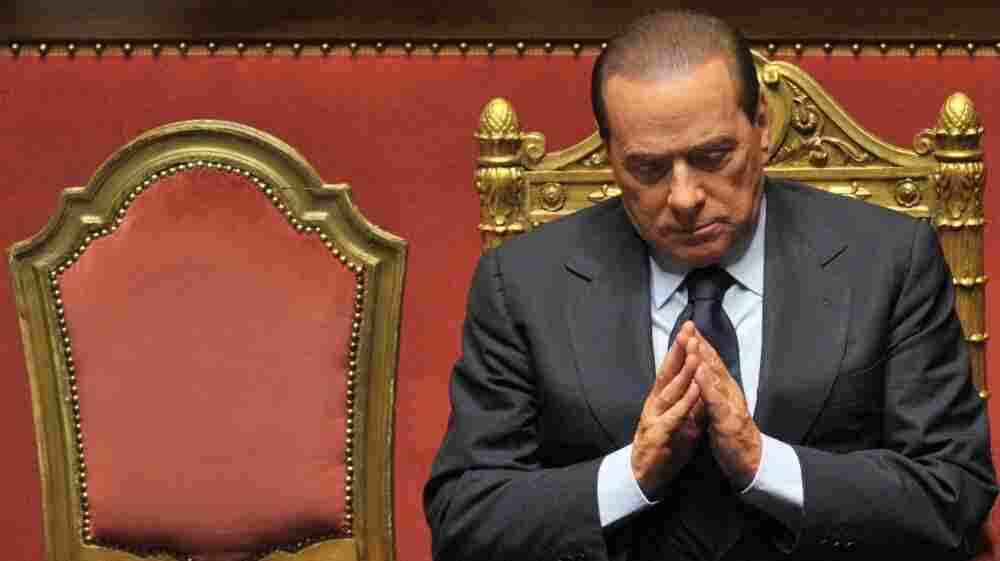 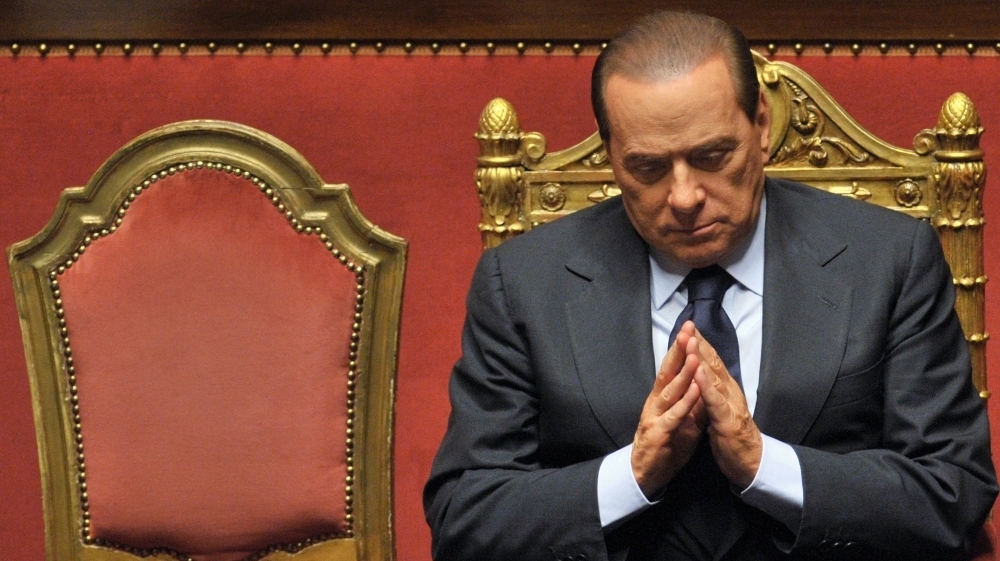 Prime Minister Silvio Berlusconi delivers an address to Italy's Senate in December 2010. Berlusconi, whose political survival skills are legendary, promised to step down after the Senate approved an austerity package.

The man known as Italy's Great Seducer may have finally lost his charm.

Silvio Berlusconi, the country's scandal-plagued prime minister, survivor of some 50 confidence motions over the years and twice thrown out of office, says he will exit from the Italian political scene now that the nation's parliament has passed an austerity package.

That resignation could come as early as this weekend, although there has been speculation that Berlusconi could hang on until as late as February, when new elections are expected to be held.

A Short History Of Berlusconi's Woes

1990
Berlusconi convicted of providing false testimony in connection with his secret (and illegal) "Propaganda 2" Masonic lodge. No sentence was issued due to an amnesty passed the previous year.

1992-1993
Court investigates Berlusconi's alleged ties to the Sicilian Mafia, but no charges arose after the deadline for the probe expired.

1996
Berlusconi is convicted of bribing a member of the finance police, but the sentence is overturned on appeal because the statute of limitations expired.

1997
Conviction on charges of bribing then-Prime Minister Bettino Craxi. Sentence is overturned on appeal because the statute of limitations expired.

2004
Berlusconi and other members of his Cabinet are charged with "corrupting a judge" but, with the support of his majority in Parliament, a law is passed granting top government officials limited immunity from prosecution while in office. Berlusconi is ultimately acquitted.

2005
He is acquitted on two other charges of false accounting and found not guilty in a third case after Berlusconi's majority in Parliament redefines the law.

2008
Berlusconi is indicted in Spain on charges of tax fraud and violating antitrust laws regarding the TV network Telecinco. He is acquitted.

— Under investigation for illegal wiretapping

For many Italians, not to mention European Union leaders, Berlusconi's arrivederci can't come soon enough. Considering his political resilience, it's not surprising that there is reluctance to count him out. Still, the reaction in many corners is unmistakable.

"I'm happy, since he should have stepped down when his scandals broke and his decline began," Luisa Amato, a media consultant in Rome, told Britain's Guardian newspaper.

If Berlusconi does step down as expected, he will leave behind an Italy on the brink of financial collapse and a leadership post that will need work to remove the aura of corruption.

But Berlusconi, who used his wealth and charisma to remain at or near the center of Italian politics for the better part of two decades, is "only a symptom of a broader problem in an Italian society that is resistant to reform," says Philip Giurlando, political scientist at Queens University in Kingston, Canada.

"He entered office 17 years ago promising liberal reforms, and he's implemented none of them," Giurlando said of Berlusconi.

Whatever his original intentions, Berlusconi's legal troubles (by his own estimate, he is the "most legally persecuted man of all time," having been the subject of some 2,500 court hearings), combined with the need to keep the country's entrenched interest groups as allies, meant the old order was not budging.

"He represents this sort of style over substance that has been a feature of the world economy, particularly in Europe and the United States, over the last 20 to 30 years," says John Agnew, author of the book Berlusconi's Italy and a professor at the University of California, Los Angeles.

"It is a bit of a paradox. You have a government led by an entrepreneur who ... wasn't able at all to deliver the reforms and potential growth in the country," says Carlo Bastasin, a senior fellow at the Brookings Institution.

"If you look at all the periods over the past 20 years where Berlusconi was in power, they were actually periods of fiscal laxity compared with times when technical or central-led governments were in charge," he says.

In any case, the Italian leader would have faced the task of dislodging a gigantic public sector, powerful guilds that control the country's service sector and an aging population prepared to do battle with anyone threatening its expensive social safety net.

"A lot of people vote not on a mature notion of the common good, but on the basis of their own personal gains and losses," says Giurlando. "This is a problem in democracies everywhere, but in Italy, it's particularly acute."

Perhaps the biggest reason Berlusconi has been reluctant to stand down is his fear of prosecution once he leaves office.

"He spends an enormous amount of time and energy ... trying to craft laws that don't apply generally to the population, but just to him," Agnew says. "This is part of Italy's problem, and it's a big part of his own credibility problem. He isn't concerned with the business of the country, but with his own business."

With focus in the European Union shifting briefly away from Greece last month and onto Italy and its growing public debt — now 120 percent or more of gross domestic product — Berlusconi promised to double down on austerity measures to clean up the mess.

But by then, disdain among his fellow EU leaders was palpable. German Chancellor Angela Merkel and French President Nicolas Sarkozy, when asked at a joint news conference last month whether they thought Berlusconi had gotten the message on reforms, seemed unable to keep their game faces. After a pregnant pause, Sarkozy glanced over at Merkel and broke into a knowing grin that was returned by the chancellor.

Meanwhile, Italy's financial troubles are getting worse. Earlier this week, bond rates for Italy — which go up along with the perceptions of risk on sovereign debt — spiked past 7 percent. That is a level that has proven unsustainable for other nations, such as Greece.

"I don't envy the government or the individual that comes in," says Scheherazade Rehman, a professor at George Washington University.

Rehman and other observers, just as average Italians, are quick to attach a caveat to Berlusconi's promise to step down: Don't believe it until you see it.

"He has survived situations that I think no other politician would have survived," she says. "But I think everyone is feeling that he really has run out of time this time."

"What's different this time around is that there's a sense of doom, almost," he says. "Getting rid of him will help enormously in getting rid of the problem."