Accessibility links
'Mrs. Nixon' Reimagines An Enigmatic First Lady Who was Pat Nixon? Aside from being the wife of President Richard Nixon — and a very private person — she remains mostly a mystery. Now, a new novel by Ann Beattie blends fact and fiction in an effort to sketch the life of the former first lady. 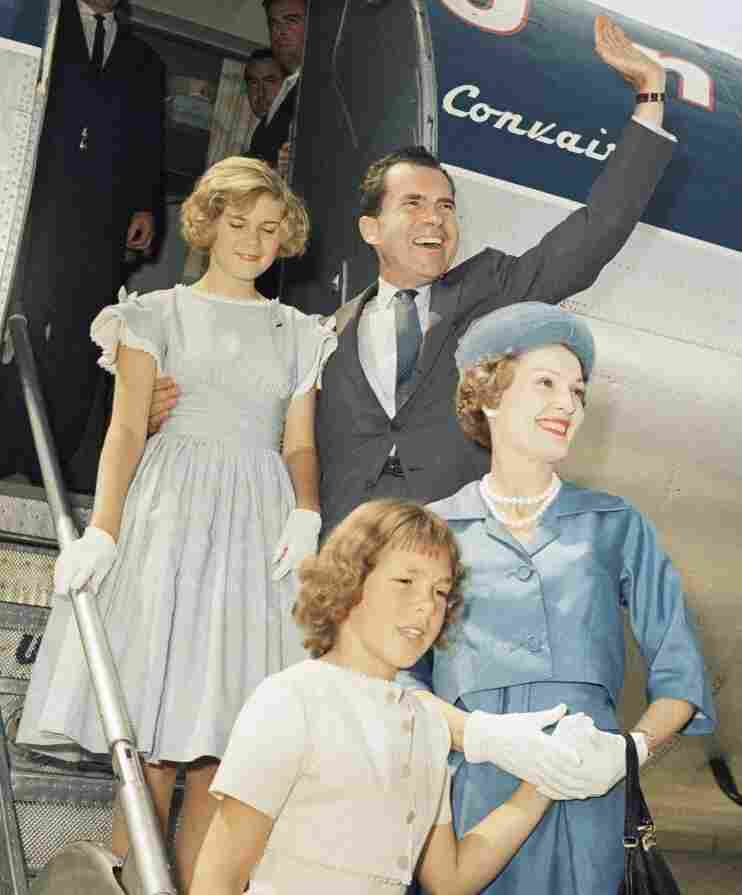 Then-Vice President Richard Nixon arrives in Chicago for the 1960 Republican National Convention with his wife, Pat, and his daughters Patricia (left) and Julie (right). Mrs. Nixon was known for her ever-present smile and well-groomed appearance. AP hide caption 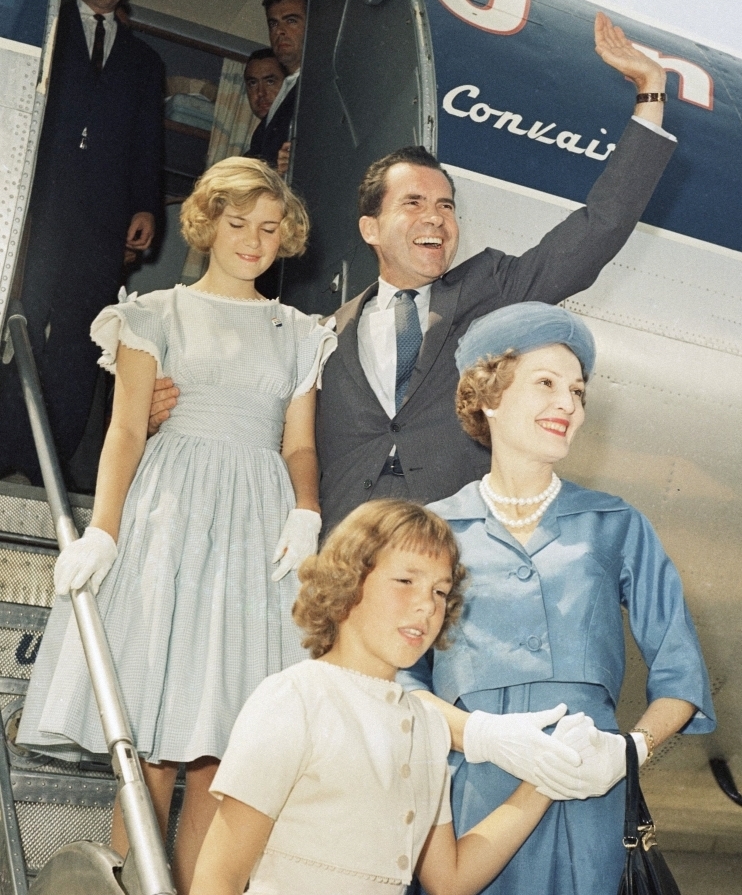 Then-Vice President Richard Nixon arrives in Chicago for the 1960 Republican National Convention with his wife, Pat, and his daughters Patricia (left) and Julie (right). Mrs. Nixon was known for her ever-present smile and well-groomed appearance.

Aside from being the wife of one of the most well-known politicians in recent American history, Pat Nixon is mostly a mystery. Throughout crisis and scandal, she somehow managed to remain a private public figure.

So who was Mrs. Nixon? That's the question award-winning author Ann Beattie aims to answer in an unconventional new novel. Mrs. Nixon: A Novelist Imagines a Life isn't quite fact, and it isn't quite fiction. With both humor and gravity, Beattie pieces together letters, conversations, imagined sketches and even literary criticisms to craft an insightful portrait of the former first lady.

Beattie tells NPR's Linda Wertheimer that when she first conceived of the book, she wasn't sure what form it would take. "It's a genre bender, that's for sure," she says.

Drawing A Line Between Fact And Fiction

Though the novel does include fictionalized moments of Nixon's life, Beattie says she was careful to distinguish those moments from the factual ones.

"The book is very thoroughly researched, and any point at which I diverge and am writing fiction — which I wouldn't say happens all that often in the book at all — I do let the reader know that I'm writing fiction," she says. 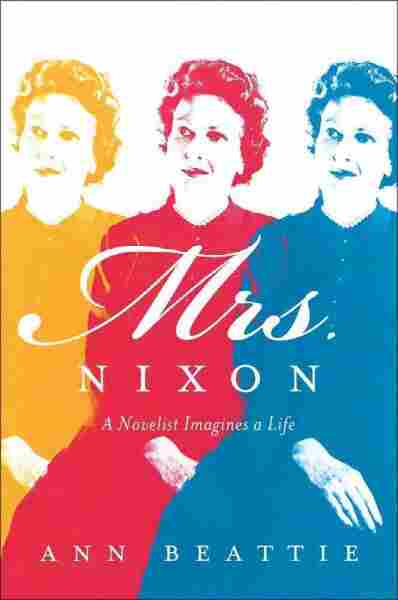 A Novelist Imagines a Life

Beattie quotes Nixon Eisenhower's real-life stories verbatim. In one episode, Nixon Eisenhower recalls how then-President Lyndon B. Johnson had sentimentally arranged for the Nixon family dogs to be the first to greet them as they entered their new home at the White House. In that same chapter, Beattie includes scenes of Pat Nixon walking on railroad tracks, and rolling and smoking cigarettes in her youth.

These historical snippets are followed by a chapter called "Moments of Mrs. Nixon's Life That I've Invented." It includes a sketch of Nixon drawing sea creatures in the sand — musing about the size of the octopuses that lurk in the Florida waters — as her husband reads by the pool, one of his preferred pastimes.

Beattie explains that she wrote these imagined moments in a halting style that's almost like shorthand.

"I wanted it to be almost as if I had a camera [and] I was able to move in on a detail and come in sharp focus," she says, "This isn't, clearly, very elegantly written ... It's as though in the moment I'm clarifying this to myself, but just letting the notes more or less stand."

Beattie says she based many of her imaginings on truth — President Richard Nixon, for example, did reportedly prefer sitting in a chair by the pool, rather than swimming in it.

"I'm calling on things that I have read are the way things were," she says. "Even though it may be a little bit subtle ... I think that you pick up a kind of cryptic quality about it."

Reading Between The Lines

Pat Nixon was one of the few modern first ladies not to write a memoir, but there's a lot to be learned by simply looking at her life. 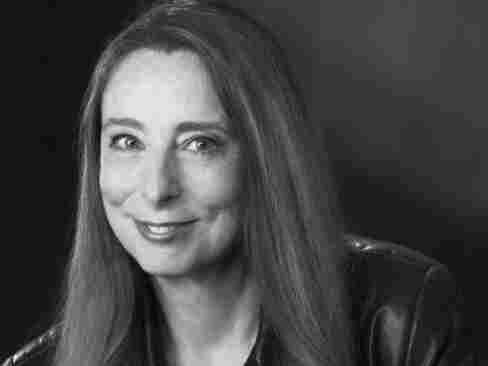 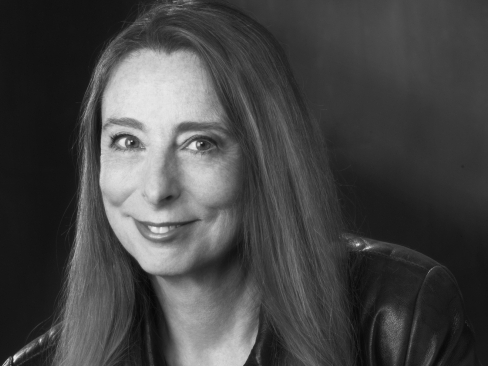 Ann Beattie is also the author of Chilly Scenes of Winter, Love Always and Distortions.

For example, Nixon may not have written about the risks, dangers and anxieties of her duties as first lady, but her courage in carrying them out is undeniable.

"She took many trips abroad with [her husband] when there was a lot of opposition to the policies of the United States" Beattie says. "They were in car caravans that were attacked by angry mobs — yes, certainly, she was often in danger."

Beattie says that even after all her research, Nixon remains an enigma. But there are things the former first lady simply couldn't hide; whether she liked it or not, people who are photographed as often as Nixon was can't help but give you certain information.

Read an excerpt of Mrs. Nixon