Accessibility links
Million Veteran Project To Create World's Largest Medical Database The Department of Veterans Affairs is way ahead of the curve when it comes to electronic medical records, which it's been collecting for 25 years. The Million Veteran Project launched this year is an effort to pair the records with blood samples — which contain DNA — from 1 million veterans. 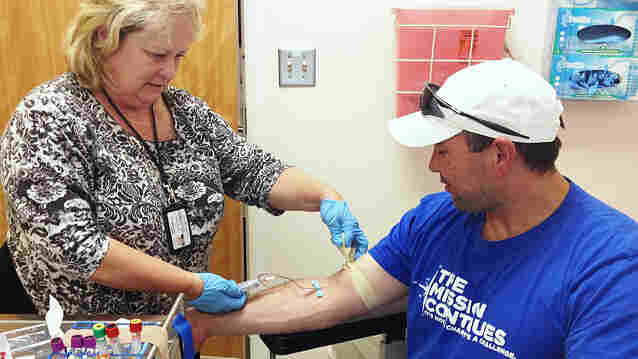 Carl Schuler is one of 10,000 vets to have donated blood samples to the Million Veteran Program. Amy Standen for NPR hide caption 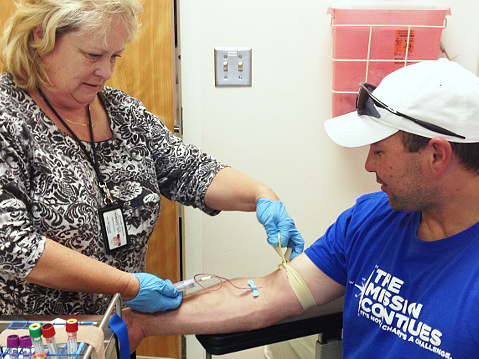 Carl Schuler is one of 10,000 vets to have donated blood samples to the Million Veteran Program.

What haunts Carl Schuler about his two tours in Iraq is the fact that he came out of them largely unscathed.

This was not the case for his best friend, who was badly injured when his truck was hit by a roadside bomb.

"You start thinking about, well, how fair is that? You know, here's my best friend, this is how he ends up, 80 percent burns, two members in the vehicle were killed, and here I am in a similar situation, and all of us ended up being OK," Schuler says. "It's a tough thing to deal with."

Back in the States, Schuler has struggled with problems that will sound familiar to a lot of veterans. He's had to tame his road rage. And sometimes he can be a bit withdrawn.

What's gotten him through all of this is helping other returning soldiers. He's a counselor for veterans who are having financial problems. And it was that same impulse — to help veterans — that brought him to a VA Medical Center in Palo Alto, Calif., on a recent morning.

Schuler came to take part in something called the Million Veteran Program, or MVP. The idea is to build a huge database, with both medical histories and blood samples from 1 million U.S. veterans.

What makes this possible is that the Department of Veterans Affairs has been keeping computerized medical records for more than two decades. This puts the VA way ahead of the curve, compared with most hospitals and doctors' offices. The VA is now turning that information into a gold mine for medical research.

"Not only do we have all their clinical records — laboratory, vital signs, pharmacy database — we have annual assessments that we will do that we can track people, assessments of depression, PTSD, suicide screening, alcohol and substances, traumatic brain injury," says Dr. Jennifer Hoblyn, who specializes in mental illness at the VA of Palo Alto.

The VA will remove the names, so the data are anonymous. Then, it will pair the records with blood samples from 1 million U.S. veterans.

Even if the effort falls well short of 1 million, the program has the potential to be one of the most comprehensive medical databases in the world. It could help researchers better understand why some people are more responsive to certain drugs, for instance, or are more vulnerable to diseases like diabetes or Alzheimer's. Still, some would-be participants worry about privacy, which has made recruitment a challenge.

Robert Hiatt, an epidemiologist at the University of California, San Francisco, praises the effort. Hiatt says when he was starting out in his field, he would send data collectors with clipboards from doctor's office to doctor's office, pulling folders from shelves and manually tallying up the numbers.

But as the research has grown more sophisticated, scientists like Hiatt need far more data. Instead of hundreds of cases to compare, they now want thousands.

"Big numbers are important because the effects are small," Hiatt says. "In order to detect small effects and have some confidence in them, you need large numbers."

At the VA, a major focus of research is on post-traumatic stress disorder, which is relatively common but hard to predict. Some soldiers suffer terribly. Others don't. To know why, you need to look for patterns, across large numbers of veterans.

The answers most likely won't be just in the DNA. They'll have to do with complicated interactions of genes and environmental factors like diet or where someone is from.

Recently the Million Veteran Program signed on its 10,000th participant. Clinics, like the one in Palo Alto, are stepping up their recruitment efforts.

Staff members say the No. 1 concern they hear is privacy and whether the information will make its way to employers or insurers. That means reassuring thousands of veterans that the data cannot be connected with their names.

Schuler says he knows taking part in the program isn't likely to improve his own health, or even that of the soldiers with whom he served. But he considers it an extension of his work to help other veterans.

"This was just another piece of that puzzle," Schuler says. A way to continue his service, even now that he's back home.