Accessibility links
On Capitol Hill, Ayn Rand's 'Atlas' Can't Be Shrugged Off In the 1950s, Rand felt that her ideal of unfettered capitalism was missing in politics. But today, her ideas are alive and well-represented in the U.S. Capitol. Her philosophy has sunk so deeply into our political thought, many people don't even recognize it as hers anymore. 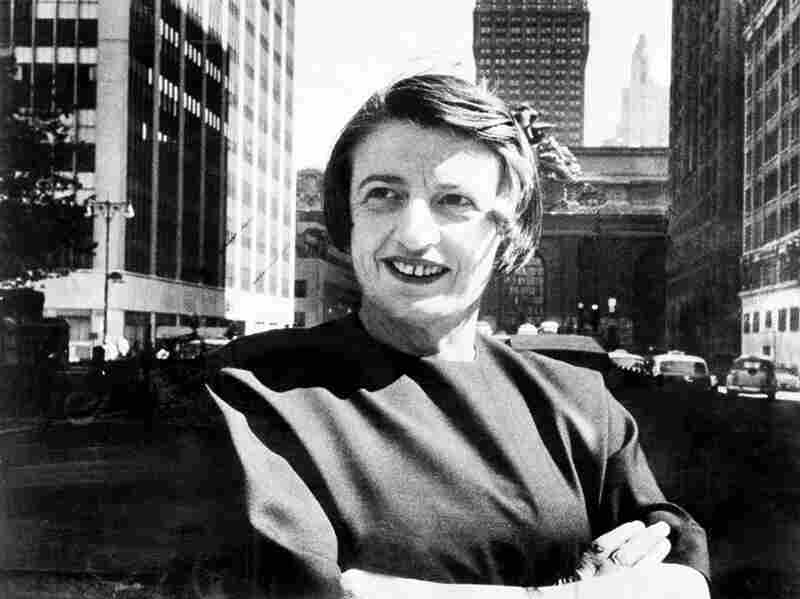 Ayn Rand, the Russian-born American novelist, is shown in Manhattan with the Grand Central Terminal building in the background in 1962. AP hide caption 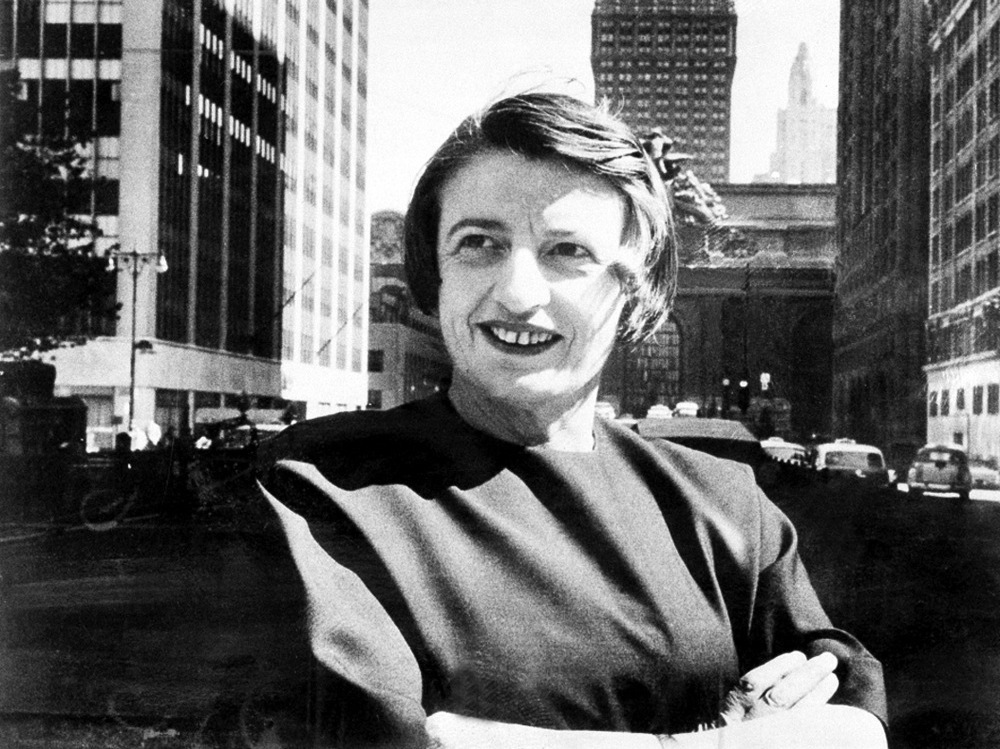 Ayn Rand, the Russian-born American novelist, is shown in Manhattan with the Grand Central Terminal building in the background in 1962.

These days it can feel like the country is unsteady — politically, economically. In a search for the way forward, scholars and politicians often turn to their fundamental beliefs. NPR is taking a look at some of the most influential philosophers whose ideas molded the present and could shape the future. You might not know all their names, but you're certainly familiar with their ideas. They are woven into the fabric of our society.

Ayn Rand is best known for her novels The Fountainhead and Atlas Shrugged. The ideas behind them — her philosophy — have sunk so deeply into our political thought, most people don't even recognize them as her ideas anymore.

Underpinning that statement is a philosophy Rand introduced through her best-selling novel Atlas Shrugged.

However, when it was released in the late 1950s, the book wasn't exactly embraced.

I am opposed to all forms of control. I am for an absolute, laissez-faire, free, unregulated economy.

"Throughout the United States, small pockets of intellectuals have become involved in a new and unusual philosophy, which would seem to strike at the very roots of our society," he says, introducing the 1959 segment.

Wallace is in a chair, on a stark set, holding his notes and a cigarette. Across from him sits Rand, a native Russian, small and sharp and a little nervous. Wallace asks her to outline the idea she calls "objectivism."

It is, she says, a system of morality "not based on faith" or emotion, "but on reason."

Rand wholly rejected religion. She called it a weakness, even a parasite — one that convinces people their purpose is to work for the betterment of others. In fact, she says, for man, the truth is just the opposite.

"His highest moral purpose is the achievement of his own happiness," she says.

Wallace asks Rand how her philosophy applies to politics and government. And his question reveals a journalist's assumptions about the America of that time — with Eisenhower in the White House and Leave It to Beaver on TV:

"One of the principal achievements of this country in the past 20 years, particularly — I think most people agree — is the gradual growth of social, protective legislation, based on the principle that we are our brothers' keepers."

"How do you feel about the political trends of the United States?" Wallace asks.

"I feel that it is terrible that you see destruction all around you, and that you are moving toward disaster until and unless all those welfare state conceptions have been reversed and rejected," Rand answers.

These programs are destroying individual liberties, Rand says, especially the freedom of producers, entrepreneurs, businessmen. The government has no right to take their property, she says.

1924: Rand graduated from the University of Petrograd.

1926: She got permission to leave Soviet Russia to visit relatives in the U.S. After six months in Chicago, Rand went to Hollywood to pursue a career in screenwriting.

1929: She married Frank O'Connor. They were married until he died 50 years later.

1935: She began writing The Fountainhead, which was published in 1943, and within two years, became a bestseller.

"That's right," Rand replies. "I am opposed to all forms of control. I am for an absolute, laissez-faire, free, unregulated economy."

By now, these ideas should sound familiar.

A Prediction Of The Future?

At the time, Rand's novels were almost universally panned. Her ideas were called "the height of immorality." Her followers, the objectivists, were seen as a radical sideshow in politics and economics.

"Every time you submit to a regulation, it diminishes your liberty," says Republican Rep. Steve King of Iowa, speaking just off the House floor a few weeks ago. King says he loves Rand.

"It's almost frightening how accurate a prediction of the future the book was," Mulvaney says.

In Atlas Shrugged, which Rand considered her masterpiece, the wealthy corporate producers are the engines of the American economy, but they are constantly stymied by invasive legislation and terrible government regulations. 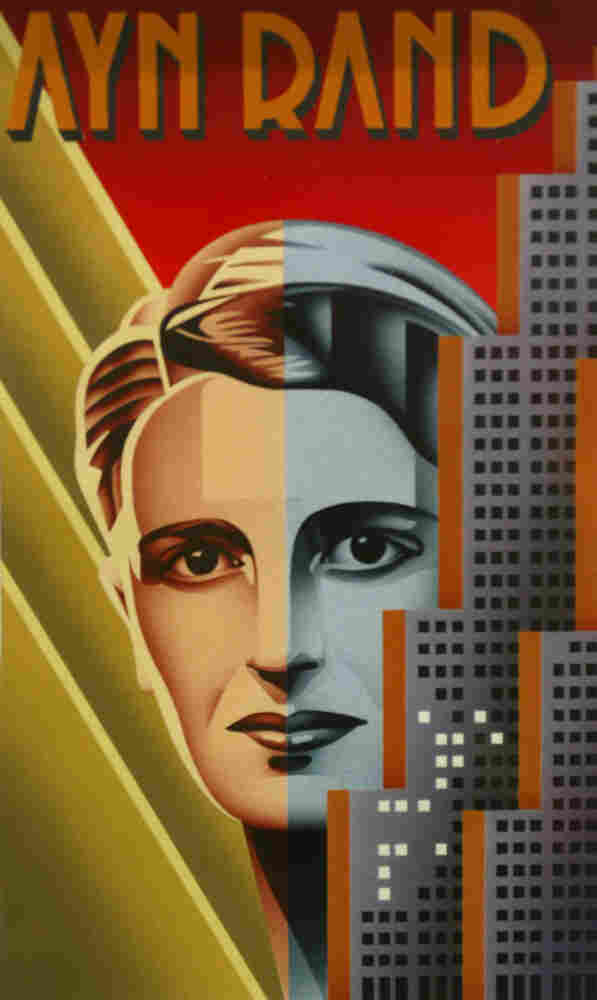 The painting of Ayn Rand by Nicholas Gaetano that was used for a U.S. postage stamp. Mark Wilson/Getty Images hide caption 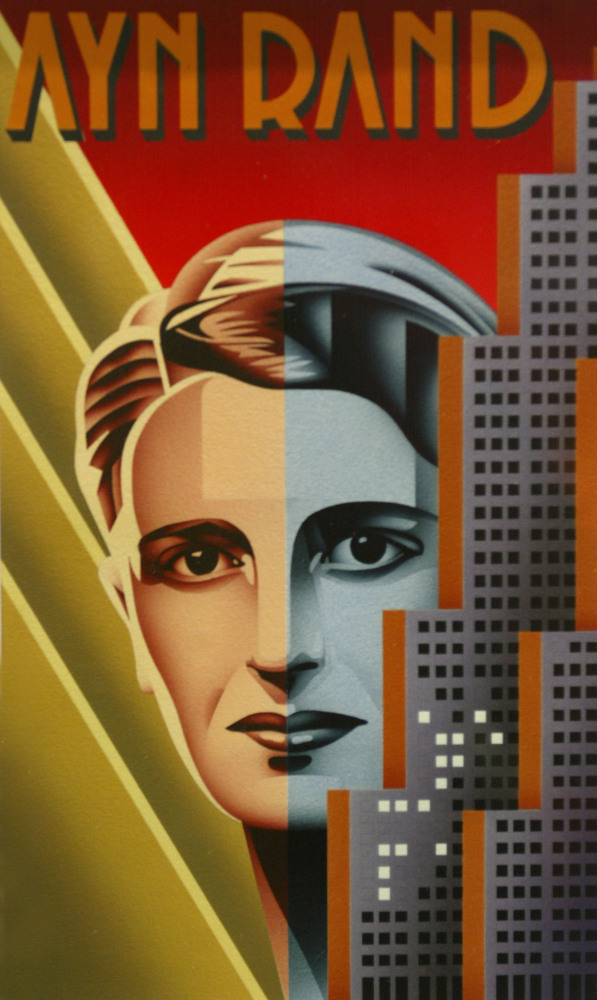 The painting of Ayn Rand by Nicholas Gaetano that was used for a U.S. postage stamp.

"If you start to demonize a certain segment of your society that are the producers, eventually they'll stop," he says.

That's just what they did in Atlas Shrugged. Rand's wealthy heroes go into hiding, leaving behind the welfare class — Rand calls them "the moochers" — and the government, or "the looters."

Put in today's language: "Job creators in America basically are on strike."

This idea that Boehner put forth in a recent speech before the Economic Club of Washington, D.C., could have come straight from Atlas Shrugged.

Boehner uses the language of slavery when he says, "We need to liberate our economy from the shackles of Washington."

Back in that 1959 interview, Wallace asked Rand why — if her ideas were so right — Americans, in their democracy, hadn't voted to protect the all-important producer class.

Her answer? Because the people hadn't been given that choice.

"Both parties today are for socialism, in effect — for controls. And there is no party, there are no voices, to offer an actual pro-capitalist, laissez-faire, economic freedom and individualism," she said. "That is what this country needs today."

If Rand were alive today, she might be pleased to see that, more and more, Americans do have that choice. And her ideas are alive and well-represented in the U.S. Capitol.