Accessibility links
Libya's Economy Faces New Tests Post Gadhafi The country faces enormous economic challenges. It has a staggering public payroll, huge subsidies on food and fuel, and a populace trained for years to view the government as the primary source of economic well-being. 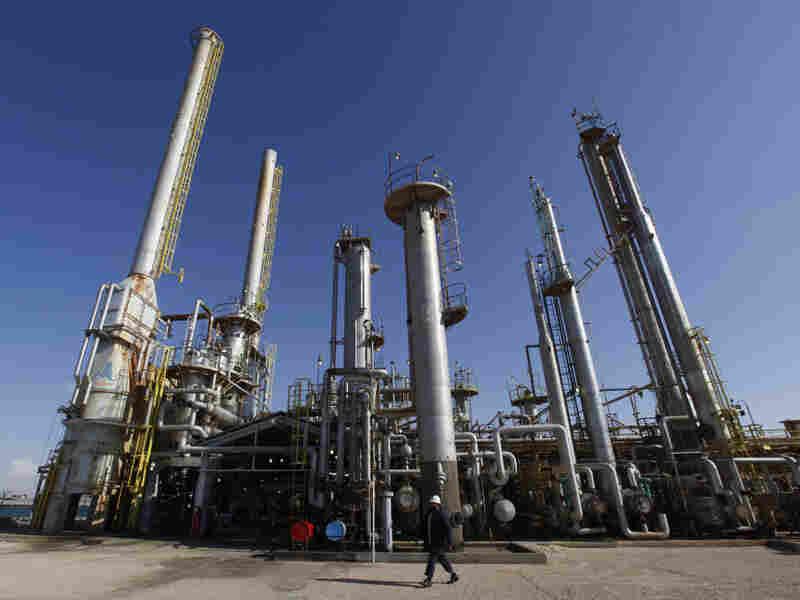 A worker walks in front of a refinery inside the Brega oil complex in Libya. Hussein Malla/AP hide caption 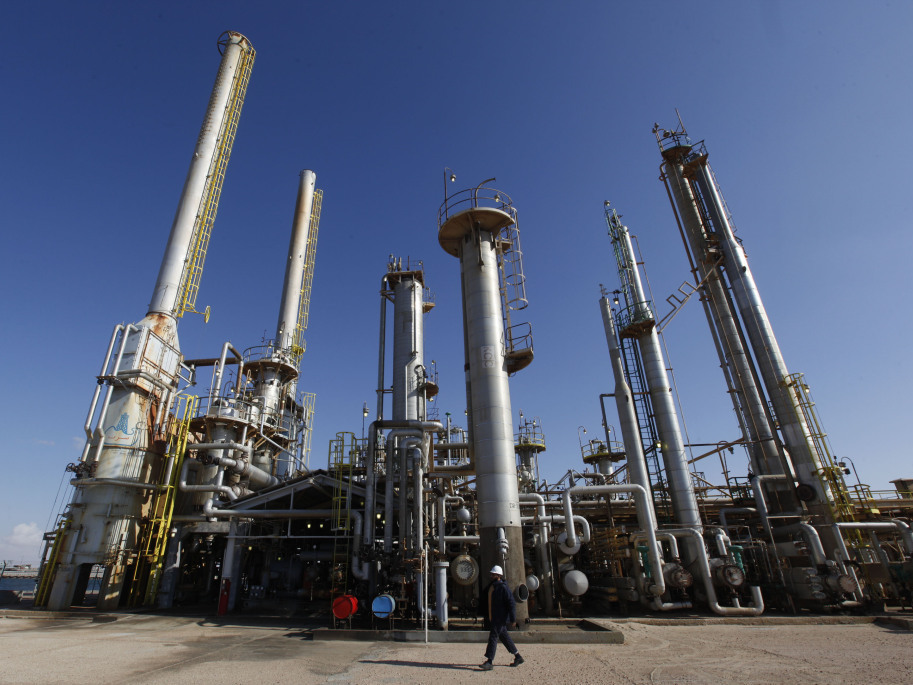 A worker walks in front of a refinery inside the Brega oil complex in Libya.

Some Americans are old enough to remember pulling up to the pump at gas stations advertising fuel in cents per gallon, not dollars. For many Libyans, that's the way it has always been and should continue to be in this sparsely populated oil-producing country.

At a Tripoli gas station on a recent afternoon, popular opinion among local Libyans appears to be that the government would keep the prices low, around 60 cents a gallon, or bring them down even further.

Khalifa Mishkel, a 50-year-old taxi driver, says higher gas prices are unacceptable because Libya is a rich country. Gasoline, electricity, water: These things, he says, should be not just cheap but free to all Libyans.

Westerners looking at the new Libya from afar tend to offer recipes for recovery that feature widespread privatization of state-owned companies and a robust private sector that takes over the tasks of job and wealth generation.

A recent op-ed piece by Jay Hallen, a financial consultant with experience in Iraq and Egypt, argued that former leader Moammar Gadhafi's moves to virtually eliminate property rights must be reversed, and that Libya's oil wealth should be used to create venture capital funds.

But such prescriptions offer no help when it comes to changing the deeply ingrained instincts of Libyans to rely on the government for just about everything.

Taxi driver Nasser Gadour says that just before the Tunisian revolution, Gadhafi tried to raise gas prices to a shocking $1 a gallon. But even a dictator of four decades had to back down in the face of public outrage.

Transition To A New Libya

In their 2007 book on the Libyan economy, authors Waniss Otman and Erling Karlberg call the Libyan worker under Gadhafi "one of the most protected in the world," adding that Libyans have a "subsidy mentality" and a "job-for-life outlook which has ill-prepared Libyans for the more aggressive and cutthroat world of competition."

Ali Tarhouni, Libya's acting finance and oil chief, says he hopes the new Libya will feature a smaller government and a larger and freer private sector, but he has no illusions that it will be an easy transition.

"The challenge here is that this is a welfare state," Tarhouni says. "What makes it challenging is that right now the level of expectations of the people are very high, and that the government will deliver even more rather than less."

One Libyan businessman is on a mission to change the subsidy regime, and eventually to end it. Husni Bey, CEO of HB Group, a collection of import/export, trading and logistics companies, says the government is spending 1,000 dinars — a little over $800 — on the average Libyan household each month. If that's the case, Bey says, then why does Libya have poor?

"We have poor because the subsidy in goods and rations is smuggled, stolen, abused [and] corrupt," Bey says. "So you are just fueling inflation, disappearance of the cash currency, which we can see here in Libya, and a few people making lots of money."

Bey says he thinks subsidy reform will not only free up the private sector, but also will reduce the percentage of Libyans — now estimated at 40 percent — living below the poverty line.

But as any number of governments from Indonesia to Iran to Egypt have found, weaning a population off a subsidy-heavy lifestyle is easier said than done. Analysts say a brand-new Libyan government is unlikely to put that at the top of its to-do list.