Accessibility links
Astaire, Burns, Allen In 'Distress' In London Town George and Ira Gershwin wrote some of their best songs for movies — one of which, 1937's A Damsel in Distress, has just been issued by Warner Archives. Critic Lloyd Schwartz says it may be the oddest of the Gershwin brothers' films. 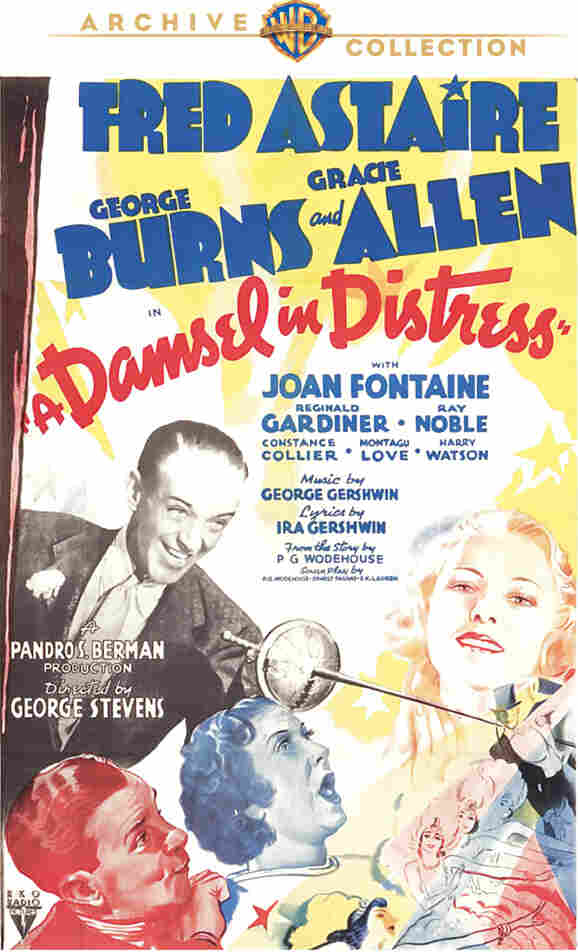 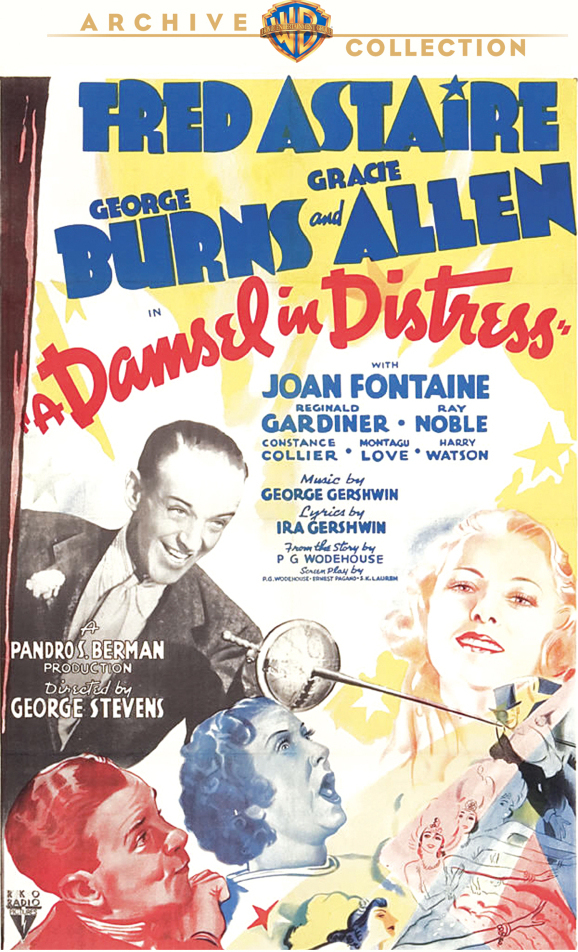 A Damsel in Distress was the third of only four films on which George Gershwin and his brother Ira collaborated. The star is Fred Astaire, but without Ginger Rogers. Their previous film together, Shall We Dance?, also with an unforgettable Gershwin score, hadn't lived up to studio expectations, and the now-famous stars were taking a break from each other.

This film — out now on a new DVD from Warner Classics — has two substitutes for Rogers, one of the best and maybe the worst. Two songs from it became standards, and Astaire's longtime assistant, choreographer Hermes Pan, won an Oscar for dance direction for one of the most delightful production numbers in a Hollywood musical.

The story is based on a novel by P.G. Wodehouse, who also co-authored the screenplay. It's a mild satire on the snobbery of the British aristocracy. The heroine, the rebellious Lady Alyce Marshmorton, is played by 18-year-old Joan Fontaine (three years before she won an Oscar in Suspicion -- the only actor ever to win an Oscar in an Alfred Hitchcock film).

Her family thinks she has fallen in love with Astaire, who plays an American dancer visiting London with his publicist and his dizzy secretary — played by George Burns and Gracie Allen. It's directed by George Stevens, who's better known for such high dramas as A Place in the Sun, Shane and Giant, but who had previously directed Astaire and Rogers in what many people consider their very best film, Swingtime.

The British setting gives the Gershwins a chance to experiment; the score actually includes two madrigals. But the great number is an 8-minute sequence in a fun house, in which Astaire and Burns and Allen slide down a chute, and dance on a double turntable turning in opposite directions — and in front of a series of fun-house mirrors that stretch them and shorten them and make them all legs with no bodies (a marvelously ironic image of Astaire).

Burns and Allen are veteran vaudevillians, and their dancing is light as a feather, especially Allen's hilarious nonstop trotting around that turntable, like some wonderful wind-up toy.

The main problem with the film is that Fontaine was no dancer. So the only romantic dance number in the film takes place in a woodland setting, and whenever possible, Fontaine is hidden by trees. It may be the only Astaire musical that doesn't end with a duet. The other great song in the film is "Nice Work If You Can Get It," with Astaire simultaneously dancing and playing drums with his feet.

Imagine a time in Hollywood when there were so many good movie songs that neither "A Foggy Day" nor "Nice Work If You Can Get It" was nominated for a best song Oscar. In fact, George Gershwin's only Oscar nomination was from the same year, for another song introduced by Fred Astaire — "They Can't Take That Away from Me," from Shall We Dance?

But it lost to a Hawaiian number called "Sweet Leilani" that Bing Crosby made popular. It would be my nomination for the worst decision ever made by the Motion Picture Academy.