Accessibility links
South Korea's Leader Under Pressure Over Trade Deal With U.S. In an exclusive interview with NPR, South Korea's President Lee Myung-bak speaks about opposition to a free trade agreement with the United States. Facing declining popularity, he also addresses criticism that his policy on North Korea is too hardline. 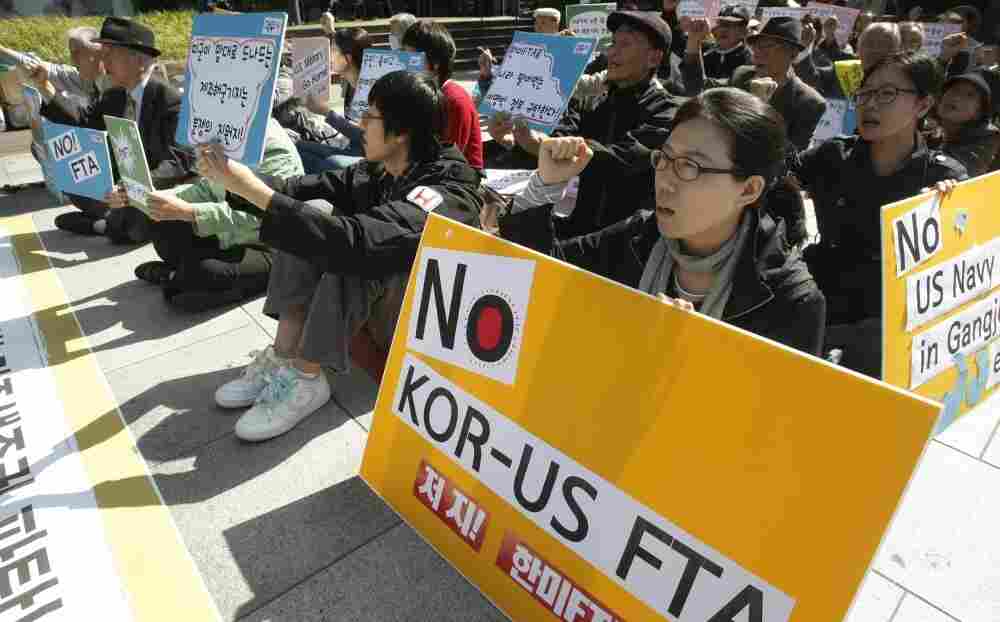 South Korean protesters shout slogans during a rally against a free trade agreement between South Korea and the United States near the U.S. Embassy in Seoul, South Korea, Oct. 11. Ahn Young-joon/AP hide caption 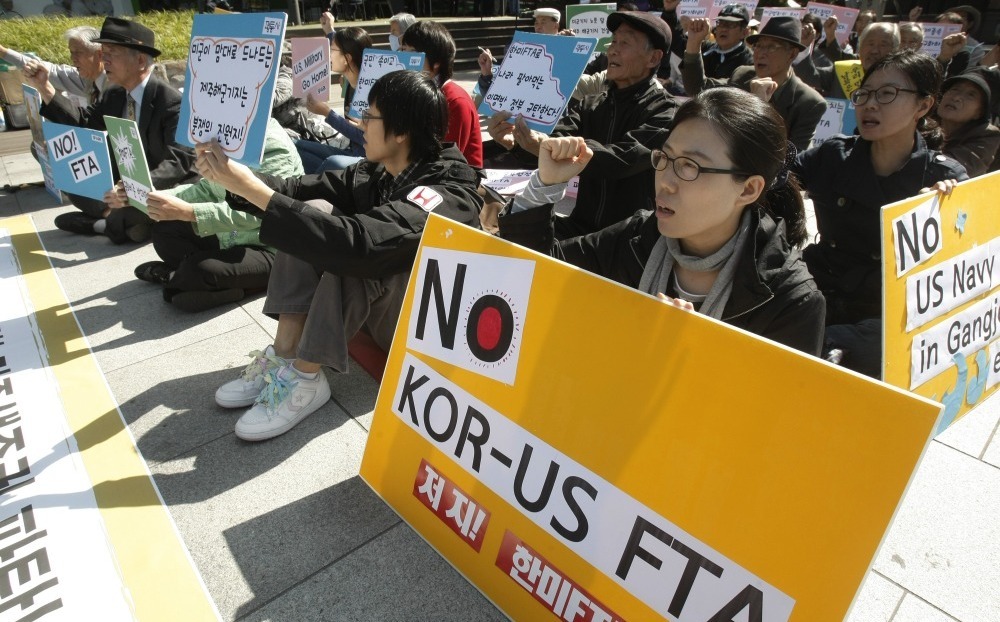 South Korean protesters shout slogans during a rally against a free trade agreement between South Korea and the United States near the U.S. Embassy in Seoul, South Korea, Oct. 11.

A free trade agreement with the U.S. more than four years in the making is causing a big political headache for South Korean President Lee Myung-bak.

On Tuesday, he was scheduled to visit lawmakers in Parliament to try to persuade them to ratify the deal, a step he has never taken before over a single specific issue. Lee is also under pressure in the polls, and facing criticism over his North Korea policy. 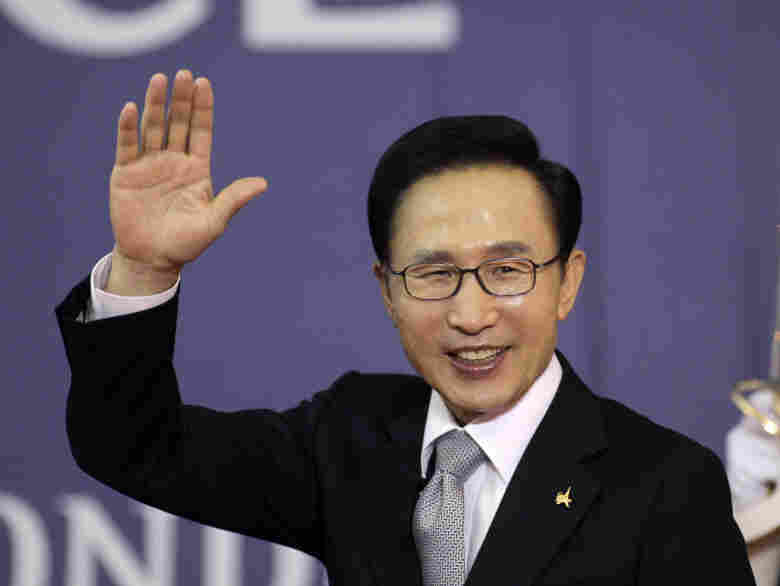 South Korea's President Lee Myung-bak waves as he arrives for a working dinner at the G20 summit in Cannes, southern France, Nov. 3. At home, Lee faces mounting criticism over the free trade deal with the U.S. as well as North Korea policy and the economy. Michel Euler/AP hide caption 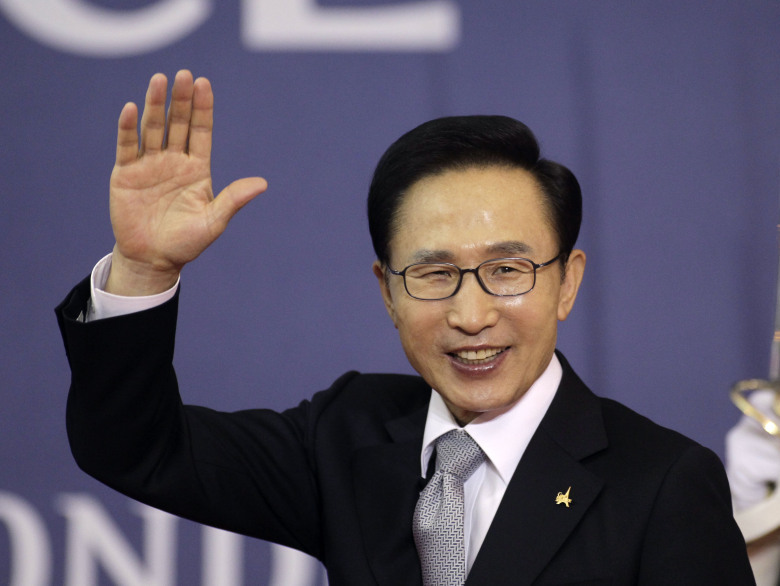 South Korea's President Lee Myung-bak waves as he arrives for a working dinner at the G20 summit in Cannes, southern France, Nov. 3. At home, Lee faces mounting criticism over the free trade deal with the U.S. as well as North Korea policy and the economy.

But in a wide-ranging exclusive interview with NPR last week, Lee called the disagreement in the National Assembly "part of a protracted political disagreement," and not about the FTA per se. He is also facing hardening opposition on the streets. On Sunday, in the biggest demonstration so far this year, thousands protested against the deal, which they say favors the U.S. and is "unpatriotic."

"The majority of South Koreans are supportive of the [United States-Korea Free Trade Agreement]," Lee said, although he did also address the lingering anti-American sentiment that resurfaces periodically.

"When you talk about a very small minority — a handful of those with anti-American sentiments — they are the most vocal, they tend to get very active, they are the first ones to come out on the streets and voice discontent when something happens," he said.

Nicknamed "The Bulldozer," Lee is South Korea's first conservative president in a decade. But as he nears the last year of his five-year term, he faces declining popularity amid concerns about the trade deal impasse, as well as deteriorating ties with North Korea and a widening wealth gap.

Since Lee took office, a pattern of escalating provocations culminated in North Korea shelling the South Korean island of Yeonpyeong in November 2010, killing four South Koreans. This followed the sinking in March of the South Korean corvette the Cheonan, with a loss of 46 South Korean servicemen.

Lee had come to office vowing to roll back the earlier "sunshine policy" of engagement, by making aid to Pyongyang conditional on steps toward nuclear disarmament. But he denies this constitutes a hard-line approach to Pyongyang.

"I must also add that my North Korea policy did in fact yield substantial results, but these results you cannot see with your eyes right now."

Recently, Lee has replaced his unification minister, Hyun In-taek, who was seen as a hard-liner, and restarted medical aid to North Korea. The president defends his approach as consistent.

"There is no change, but my North Korea policy did in fact yield substantial results, but these results you cannot see with your eyes right now. But there are fundamental changes as a result of our North Korean policy," he says.

However, observers argue that the policy has resulted in a loss of South Korean leverage over the North.

"In an economic context, there is no question South Korea is losing leverage to China," he says. "The North Korea-China economic relationship is growing significantly. Their diplomatic relationship is stronger than it has been since the Korean War era."

What this means, Delury says, is that South Korea will have to go through Beijing to get things done with North Korea, rather than dealing directly in its relationship with North Korea to achieve its own goals.

Domestically, Lee was dealt another blow last month, when a vocal critic, civic activist Park Won-soon, won the election for Seoul mayor. The vote was largely seen as a referendum on the president's rule, and the candidate backed by Lee did worse than expected.

By contrast, the new mayor is basically seen as the anti-Lee Myung-bak candidate; he supports reconciliation with North Korea, he opposes the free trade agreement, and he's very popular among young people.

Speaking to NPR at a lunch event, the new Seoul mayor didn't pull his punches.

"Since the inauguration of Mr. Lee Myung-bak, I was very much disappointed with his politics and policies. ... The paradigm he pursued was outdated," Park says. "Not only in economics, but also in many social and political issues, he made many mistakes. ... I made up my mind to run for this position as Seoul mayor to change it." 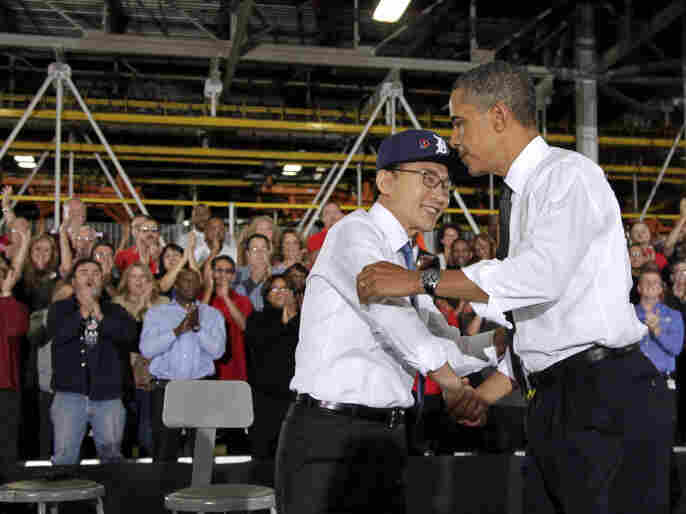 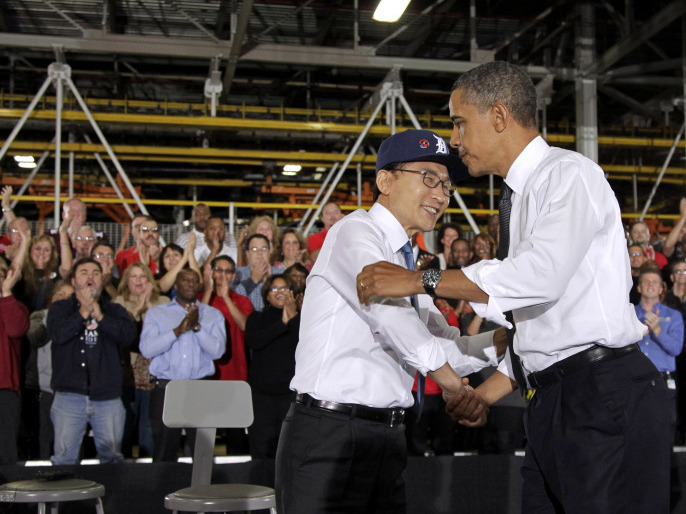 However, one bright spot during Lee's term has been ever closer ties with the United States. During Lee's state visit to Washington last month, President Obama and Lee spent so much time together that The New York Times wrote of a "presidential man-crush." On a personal level, Lee sees many similarities between himself and Obama.

"One thing that I've always noticed about Obama is the fact that he displays a lot of Asian characteristics — both in his temperament and way of thinking," Lee says. "Outwardly he's very calm and collected, but inside he's a man of resolve."

Lee says he thinks that helped the two presidents develop a sense of camaraderie and allowed them to talk on a more personal level about many issues. That, perhaps, is one of the reasons why many people used the terms "bromance" and "best friend" to describe the relationship.

But, while Lee toured the U.S., Obama emphasized his "great confidence" in the South Korean president's leadership, directly linking this to South Korea's approval of the free trade agreement, which has already been ratified by Congress.

That confidence could be undermined if the free trade agreement doesn't get ratified soon. So a protracted political stalemate in South Korea could embarrass Lee, and might even sour the bromance.