Accessibility links
Regis Philbin Explains How He 'Got This Way' On Friday, Regis Philbin will step down from his hosting duties on the talk show Live with Regis and Kelly. But that doesn't mean he's retiring. In his new memoir, How I Got This Way, Philbin chronicles the twists and turns of his career and explains where he plans to go next. 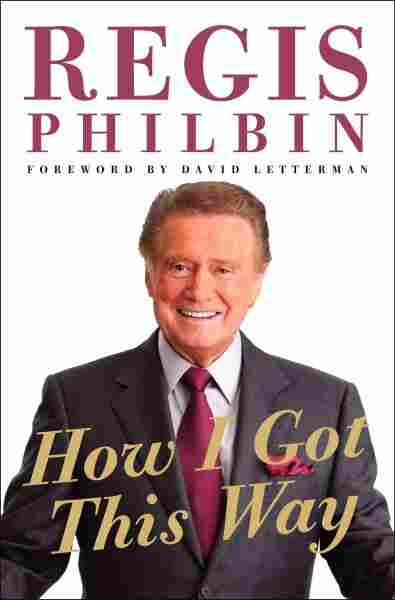 Regis Philbin holds the Guinness World Record for clocking more hours in front of a television camera than anyone else in the history of television. The game show and talk show host has been a TV presence for more than 50 years on shows like The Joey Bishop Show, Live with Regis and Kelly, America's Got Talent and Who Wants to Be a Millionaire?

On Friday, Philbin, 80, will step down from his hosting duties on the syndicated talk show Live with Regis and Kelly. But that doesn't mean the man nicknamed "the hardest working man in show business" is retiring.

"I'm moving on," he tells Fresh Air's David Bianculli. "I should have made that clear when I made the announcement. I guess I wasn't clear. If people think you're leaving a show after all these years, you might be retiring. So I understand where they're coming from, but I should have impressed the fact that I hope I'm just moving on right now."

Since Philbin announced in January that he would be leaving Live, he has been showered with praise from his co-host, Kelly Ripa, and guests like Adam Sandler, Donald Trump, Tony Bennett and David Letterman, who has called Philbin the funniest man on television.

Philbin got his start more than 50 years ago working as an NBC page. He then worked as a newscast broadcaster for several years before getting his first big break working as Joey Bishop's sidekick on The Joey Bishop Show in the late 1960s. From there, he began hosting various late-night and early-morning talk shows all over the country.

In his new memoir, How I Got This Way, Philbin chronicles meeting people who have changed him both personally and professionally. He also talks about the twists and turns of his career before he made it big. And he explains that he wasn't always as confident as he now seems.

"I missed so many opportunities along the way to do what I wanted to do because I didn't have the confidence to tell myself, much less anybody else, 'Yes, this is the business I wanted to be a part of,' " he says. "And not feeling that I had the talent ... and letting it go all the way through [my college years at] Notre Dame and then through two years of Navy service."

On his last day of military service, a major in the Marines asked Philbin what he planned to do with his life:

"I told him, 'What I'd like to do is go into television but I don't know if I have any talent or what I could do,' and he got very angry. ... He said, 'Well, what do you mean? Don't you know you can have anything you want in this life if you only want it bad enough? Do you want it?' And I said, 'Major, I'm not sure.' And he boomed at me, 'Do you want this?!' And I snapped to and gave him a salute and said, 'Yes, yes I want this.' "

The major told Philbin to get in his car and go to Hollywood.

From that first job, Philbin bounced around Hollywood, eventually winding up as Bishop's sidekick. On one of the most famous episodes of the show, Philbin announced that he was quitting the show because the ABC network didn't care for him. He then walked off the set during a live broadcast.

In his memoir, Philbin reveals that the walk-off was a ratings stunt designed by Bishop to stave off competition from Johnny Carson.

"Bishop said, 'You're going to walk off the show. You're going to be angry about what you heard in the hallway — that ABC doesn't like you and that you're not doing the job. But I'm going to bring you back because I think you're doing the job,' " says Philbin. "In other words, Joey was making himself a hero and also getting some attention for the show [thinking], 'Maybe people would tune into see what happens.' "

People did tune in. And each night, Bishop would tell the audience that he went out looking for Philbin — and couldn't find him.

"But he did bring me back," says Philbin. "It's just a show business stunt to attract attention and build a rating. That's what it comes down to."

After The Joey Bishop Show was canceled, Philbin began hosting local morning shows in Los Angeles and New York. In 1985, he was paired with Kathie Lee Gifford for the show Live with Regis and Kathie Lee. When Gifford left in 2000, she was replaced by Ripa, Philbin's current co-host. The two have spent the past decade interviewing celebrities, bantering about the news and talking about their lives.

Philbin, who lives across the street from his studio, describes his current workday like this:

Read an excerpt of How I Got This Way

The Regis Retirement Continues The Transformation Of Daytime Television Jan. 18, 2011
Kathie Lee Gifford's 'Life And Other Calamities' May 16, 2009