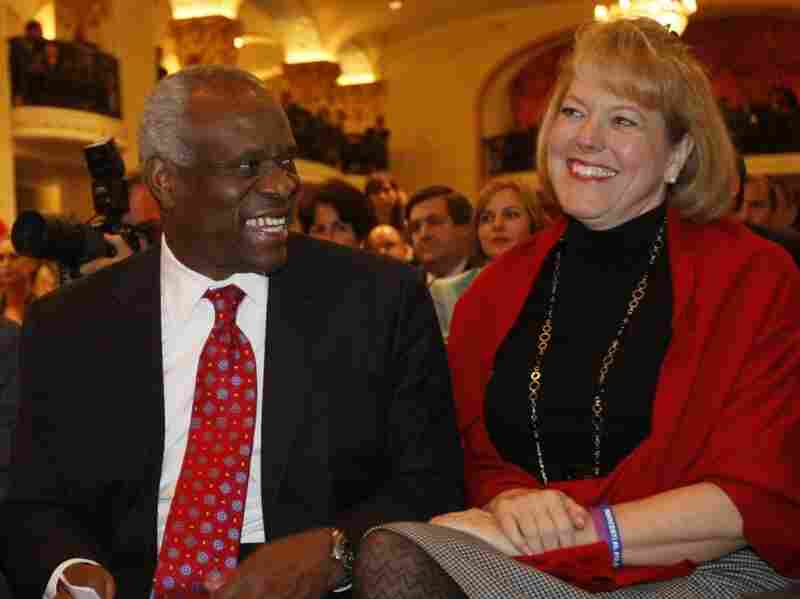 Supreme Court Justice Clarence Thomas sits with his wife Virginia Thomas, as he is introduced at the Federalist Society in Washington on Nov. 15, 2007. Charles Dharapak,/AP Photo hide caption 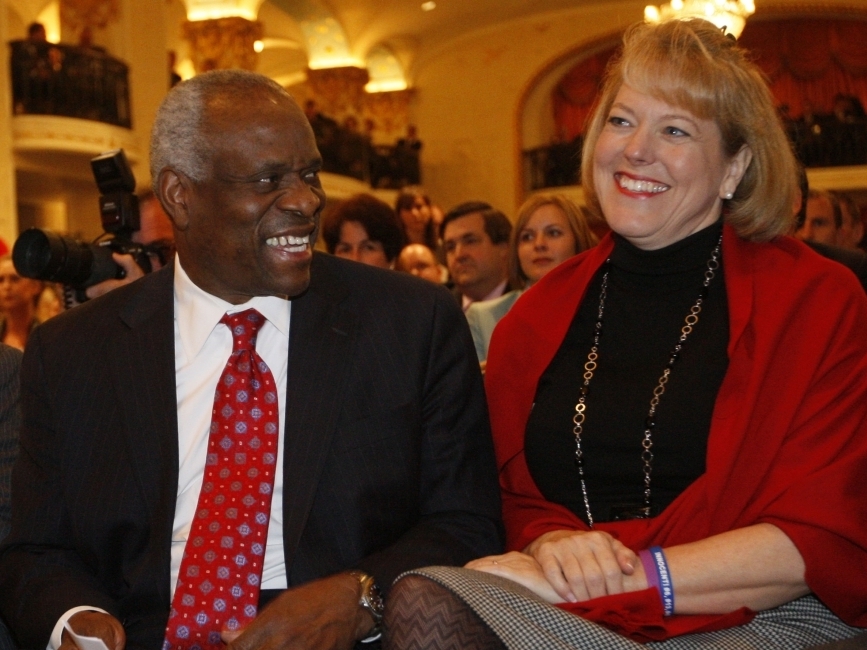 Supreme Court Justice Clarence Thomas sits with his wife Virginia Thomas, as he is introduced at the Federalist Society in Washington on Nov. 15, 2007.

George Zornick is a writer for The Nation.

Today, the Supreme Court agreed to hear constitutional challenges brought on by twenty-six states and a business group to President Obama's healthcare reform bill. There will likely be arguments in the spring and a ruling by July, right in the heat of the presidential election.

This is a good time to recall that seventy-four members of Congress have signed a letter asking Justice Clarence Thomas to recuse himself from any ruling on the Affordable Care Act because of his wife's work as a conservative activist and lobbyist, where she specifically agitated for the repeal of "Obamacare." The recusal effort was spearheaded by Representative Anthony Weiner, and his resignation in June slowed the momentum around this issue on Capitol Hill—but there's still ample evidence for concern.

In 2009, Ginni Thomas founded Liberty Central, a conservative nonprofit that she said would fight President Obama's "hard-left agenda." Thomas said she "felt called to the front lines with you, with my fellow citizens, to preserve what made America great." The group frequently advocates against "Obamacare," pushing misinformation that it would be a "disaster" for small businesses and urging lawmakers to repeal it.

This created immediate concern among legal experts, who were worried about the obvious conflict of interest, given that her husband would likely rule on challenges to the law. Moreover, Liberty Central was taking unlimited and secret donations, something aided by Clarence Thomas's ruling in Citizens United. The liberal group Common Cause complained to the Justice Department at the time, and noted "the complete lack of transparency of Liberty Central's finances makes it difficult to assess the full scope of the ethics issues raised by Ms. Thomas's role in founding and leading the group."

Ginni Thomas resigned from Liberty Central late last year amid controversy over her role, though the decision was also aided by fundraising troubles and a bizarre, ill-considered phone call she placed to Anita Hill, the woman who accused her husband of sexual harassment twenty years prior.

But only a few months later, Ginni returned as head of Liberty Consulting, a new firm that boasted the ability to use Ginni's "experience and connections" to help clients with "governmental affairs efforts." She met with over half of the incoming freshman class of legislators, and e-mailed all of their chiefs of staff, dubbing herself "a self-appointed, ambassador to the freshmen class and an ambassador to the tea party movement."

When I covered the Faith and Freedom conference earlier this year, I attended a panel held by Ginni Thomas and several national Tea Party leaders about how to recruit and elect deeply conservative candidates to office.

Overall, Ginni Thomas's activities raise questions "about whether Justice Thomas can be unbiased and appear to be unbiased in cases dealing with the repeal of the health care reform law or corporate political spending when his wife is working to elect members of the tea party and also advocating for their policies," in the words of Common Cause lawyer Arn Pearson earlier this year.

Clarence Thomas should probably recuse himself, but it's important to note that Ginni's activities are much more likely a symptom of her husband's deep bias and antipathy towards progressive causes, not the cause of them. In an excellent (and very long) profile of Clarence Thomas in The New Yorker, Jeffrey Toobin explained in great detail what motivates the extremely conservative justice:

"It is likely to be the most important case for the Justices since Bush v. Gore, and it will certainly be the clearest test yet of Thomas's ascendancy at the Court. Thomas's entire career as a judge has been building toward the moment when he would be able to declare that law unconstitutional. It would be not only a victory for his approach to the Constitution but also, it seems, a defeat for the enemies who have pursued him for so long: liberals, law professors, journalists—the group that Thomas refers to collectively as 'the elites.' Thomas's triumph over the health-care law and its supporters is by no means assured, but it is now tantalizingly within reach."

You can read the whole thing here.