Accessibility links
For Arab Nations In Transition, U.S. Emphasizes Trade With limited budget resources, the U.S. is focusing on trade and debt relief in an effort to encourage democratic and economic reforms in North Africa and the Middle East. It's also a way to tackle youth unemployment, one of the main problems that sparked the Arab uprisings. 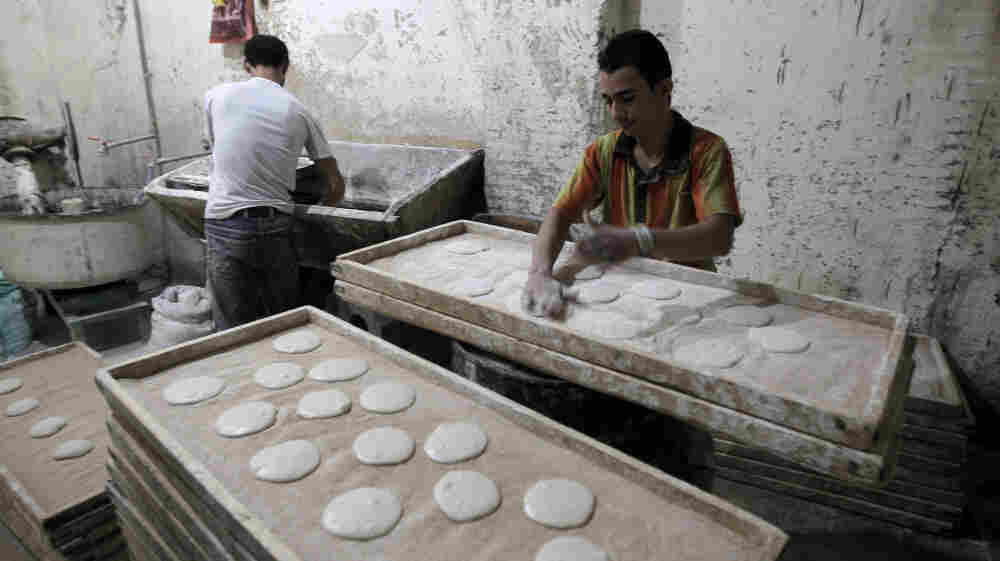 Egyptians are seen working in a bakery in Cairo. The U.S. has been working on ways to help revive the economies of nations in transition, like Egypt, Tunisia and Libya, while having limited resources available during tough economic times. Mahmud Hams /AFP/Getty Images hide caption 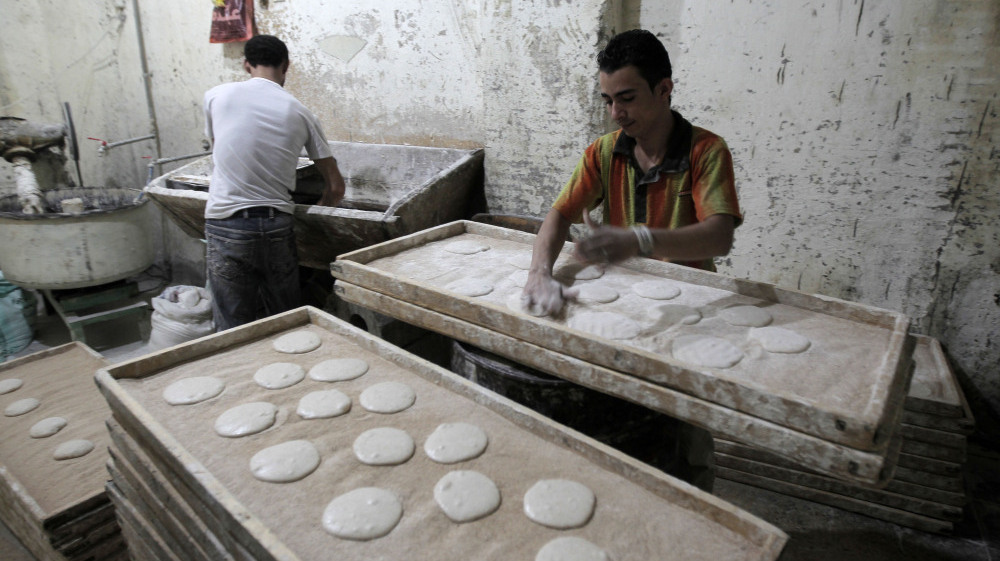 Egyptians are seen working in a bakery in Cairo. The U.S. has been working on ways to help revive the economies of nations in transition, like Egypt, Tunisia and Libya, while having limited resources available during tough economic times.

Just as the Arab uprisings were getting under way, U.S. Secretary of State Hillary Clinton was warning that the region's foundations were sinking in the sand and that governments needed to respond to the needs of a young, educated and underemployed generation.

Now, she's come up with a new catchphrase.

"As tens of millions of young people enter the job market each year, we recognize that the Arab political awakening must also deliver an economic awakening," Clinton said. "And we are working to help societies create jobs to ensure that it does."

The strategy is part of the Obama administration's effort to encourage democratic and economic reforms in North Africa and the Middle East in an age of austerity. The U.S. doesn't have the resources it once had when it helped rebuild post-World War II Europe or when it helped finance transitions after the Cold War. Now, the U.S. is focusing on trade rather than aid.

Clinton has set up an office at the State Department to figure out ways to support the transitions in Tunisia, Egypt and Libya. She tapped veteran diplomat William Taylor, who has worked on reconstruction programs in the past, to head the office. He says he recognizes today's budget constraints.

"We had a lot more money to put into the former Soviet Union [and] Eastern Europe," Taylor says. "Today's fiscal situation is obviously different, but also these countries need different things. That is, they need some things that we can provide in terms of trade."

Debt relief is another thing the U.S. can offer, Taylor says, as the Egyptians owe the U.S. about $1 billion in interest on previous loans. If Congress agrees to relieve the debt, he says, the U.S. will help Egypt figure out the best way to spend that billion dollars.

These are good stopgap measures, says Michele Dunne, who runs the Rafik Hariri Middle East Center at the Atlantic Council.

"We simply cannot give the kind of money that would make a big difference in these economies," Dunne says. "The other things that we are doing, like debt relief, possible enterprise funds, are good. They can help in small ways, and they show support."

But, Dunne says, it would take something like free trade with the United States and Europe to really be an engine to pull big economies, like Egypt's, ahead.

The U.S. already has free trade agreements with Jordan and Morocco, and officials both in the U.S. and in Europe have signaled that they are ready to negotiate deals with future governments of countries now in transition.

Nejib Ayachi, the president of the Maghreb Center in Washington, says the U.S. should also be encouraging countries in the region to trade more with one another.

"The fact that these economies are not regionally integrated cost them something like 2 to 3 percent of GDP growth, according to some World Bank studies," Ayachi says. "We can use our leverage to encourage them to move on with the integration."

Negotiating trade deals, though, takes time and can't happen until these countries have their political houses in order. And while analysts are worried that the U.S. and Europe can't afford a new Marshall Plan for North Africa and the Middle East, Mohsin Khan of the Peterson Institute for International Economics says there are countries in the Arab world that can help.

"If you can marshal them to provide the assistance, then the fact that you don't have the money to do it doesn't really matter because money is money — and they sure do need it," Khan says.

So far, the grant money from the region hasn't flowed as quickly as needed, though, and economists don't see any quick fix to one of the main problems that sparked the uprisings in the Arab world — youth unemployment.